Accessibility links
Summer Science: The Perfectly Toasted Marshmallow It's the epic quest of campers everywhere: How do you toast that marshmallow just right? As part of our Summer Science series, NPR turned to a fire engineer for some professional guidance. 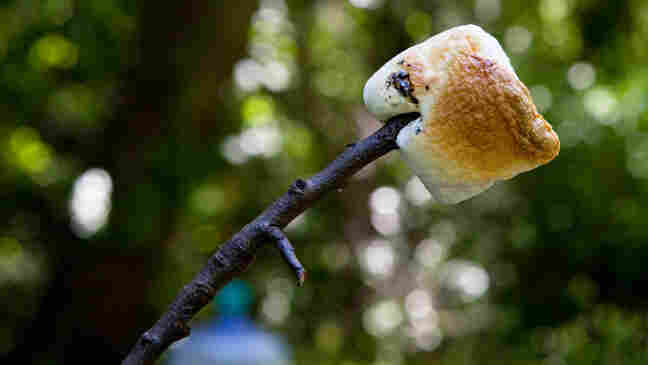 It's the epic quest of campers everywhere: How do you get the perfectly toasted marshmallow? In our inaugural installment of NPR's Summer Science series, we gave some guidance on the first key ingredient: how to build the campfire. (Later this summer, we'll attempt to answer the vexing question of how to stave off brain freeze.)

For the marshmallow-toasting tips, science correspondent Joe Palca again turned to Daniel Madryzkowski, a fire protection engineer from the National Institute of Standards and Technology.

After crisping his first attempt, Joe Palca succeeds at toasting — and eating — the perfect marshmallow.

"You want to stay a little to the side of the flames, and also over an area where you see glowing coals," Madrzykowski says. The reason: It's hard to stay in the sweet spot of the dancing flames. "If you want to get it nice and toasted, you typically rely on radiant energy."

But even with Madryzkowski's supervision and pro tips, Joe still managed to torch his marshmallow. That led him to another crucial question: Why do they burn so well?

To find out, and to hear more from their camping adventure, click on the audio link above.