Accessibility links
Starbucks Order Gives Ohio Mug Maker A Jolt Last time you slid into a booth at a diner or a local coffee shop, the waitress probably arrived with a standard-issue, thick, off-white mug. More than likely that mug came from East Liverpool, Ohio. The city's ceramics industry has faded, but an order from Starbucks has brought relief to workers at one factory there. 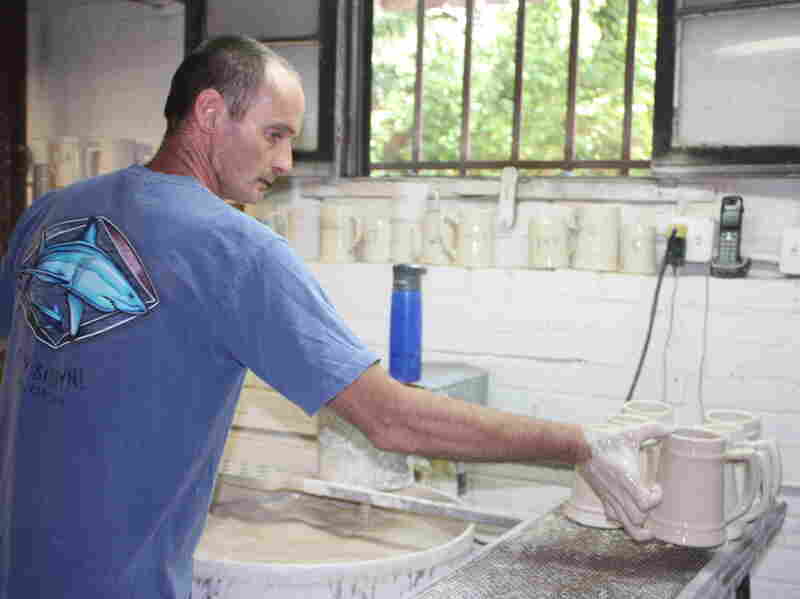 Bob Davis hand-dips mugs before they go into the kiln at American Mug and Stein in East Liverpool, Ohio. Most overseas companies have machines that can do this much faster. Amanda Rabinowitz/WKSU hide caption 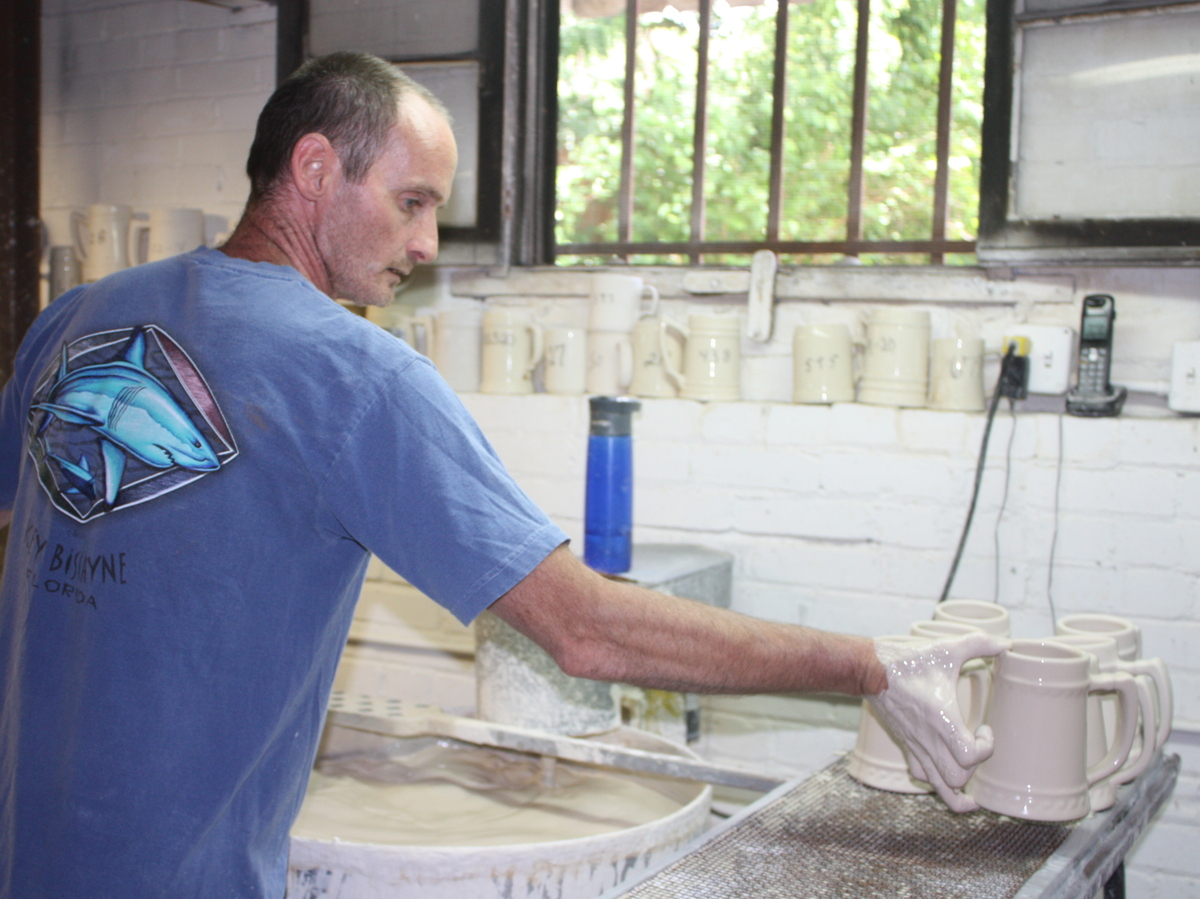 Bob Davis hand-dips mugs before they go into the kiln at American Mug and Stein in East Liverpool, Ohio. Most overseas companies have machines that can do this much faster.

For decades, when you slid into a booth at a diner or a local coffee shop, the waitress probably arrived with a standard-issue, off-white mug. More than likely that mug came from the Ohio River town of East Liverpool, which calls itself "The Pottery Capital of the Nation."

A lot of that city's pottery business is long gone. Now, one of the few remaining pottery factories in the battered town is pinning its survival on a major corporation.

To step inside American Mug and Stein in East Liverpool is to step into another era.

About 20 employees dressed in dust-covered aprons are here in a hot, dark plant under bare overhead light bulbs and swirling metal fans. They're pouring clay into heavy molds, smoothing the mugs' edges and dipping them in glaze. There's no automated assembly line or high-tech machinery here.

Owner Clyde McClellan is firing up one of the company's 30-year-old kilns.

"It's a dinosaur. It's beyond an antique," he says and laughs.

Just Weeks From Shutting Down

McClellan's ceramics company is one of the last in East Liverpool, located in Appalachia. He has been in the pottery business for 40 years and took over this company three years ago when it was just weeks from shutting down.

"I've been so close to going out of business so many times, my accountant ... he just doesn't know where to send the bill sometimes," McClellan says jokingly.

McClellan just completed his biggest order ever — 20,000 mugs for Starbucks. The sturdy, beige mugs are metal-stamped with the coffee giant's Indivisible brand on the front. They'll sell for $10 each.

But he wanted to design a product that could be made in America. "When these small towns and these small factories are supported by a large customer that believes in it, we can make it happen, we can bring it back," he says.

At McClellan's pottery factory, it takes one week to make each mug from start to finish, and the company was able to complete the huge Starbucks order in about six weeks. An overseas factory could produce twice as many in the same time. But McClellan says Starbucks was patient.

"They've come out, they spent time in my factory, they've listened. And that has made me really proud to do a good job for them," he says.

McClellan doubled his workforce for the job and so far has been able to keep them all employed — churning out a few thousand mugs a month in a continuing contract with Starbucks.

Smoothing the edges of the mugs after they come out of the molds, Marcie Delauder says with hardly any jobs in town, she's relieved to have this one. Having the order from a big company like Starbucks, she says, makes "a big difference."

This partnership is one of several Starbucks initiatives launched in the past year, including creating a small-business loan fund through the sale of wristbands in its stores.

It's an increasingly popular concept, says David Hessekiel, president of the Cause Marketing Forum. "People will be more loyal customers if they are aware of good works by a company if price and quality are roughly equal," he says.

Starbucks CEO Howard Schultz says the contract with American Mug and Stein is only the beginning.

"There are hundreds of East Liverpools around the country today," he says. "These towns have been left for dead. And even though it's more expensive to manufacture this mug in the U.S. than it would be in China or Korea or Mexico, this is what we need to do."

But McClellan says towns like his can't live only in the past. That's why he and a couple of partners just bought a shuttered pottery factory across town to outfit it with the newest equipment. Meanwhile, the original factory will continue to make mugs the old-fashioned way — by hand.