Accessibility links
A Nobel Acceptance Speech — Two Decades Overdue Myanmar's Aung San Suu Kyi is now being allowed to travel abroad for the first time in nearly a quarter century. She's heading to Europe and plans to deliver several high-profile speeches, including an address for the Nobel Peace Prize she was not allowed to collect in 1991. 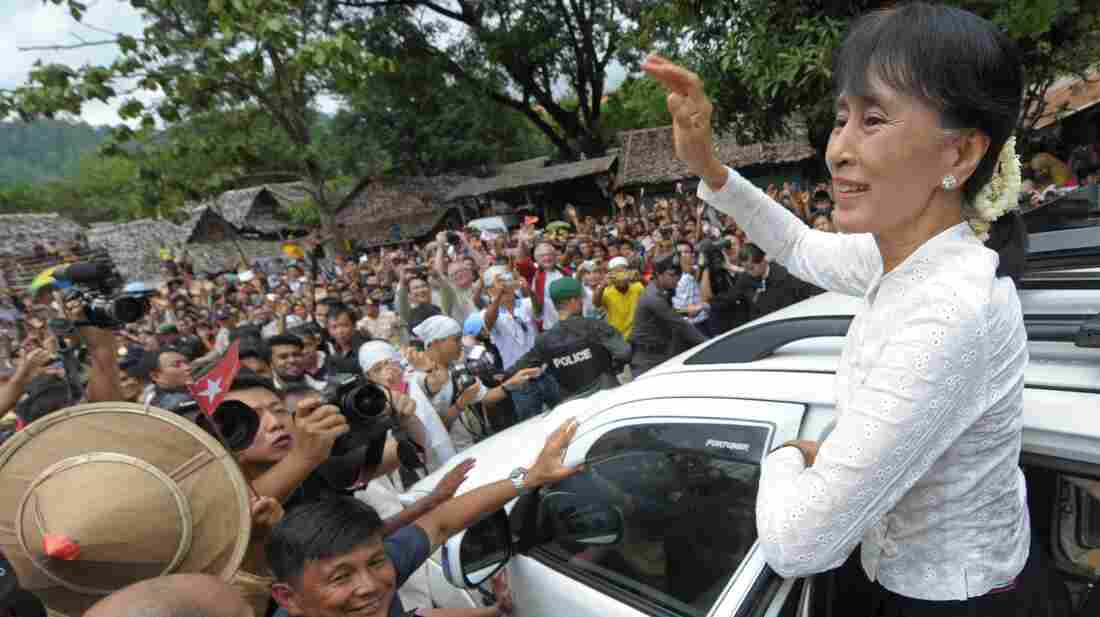 Myanmar's Aung San Suu Kyi is heading to Europe for the first time in more than two decades and will be giving a series of high-profile speeches She's shown here on June 2 meeting with Myanmarese refugees who are living in camps in Thailand. Pornchai Kittiwongsakul/AFP/Getty Images hide caption 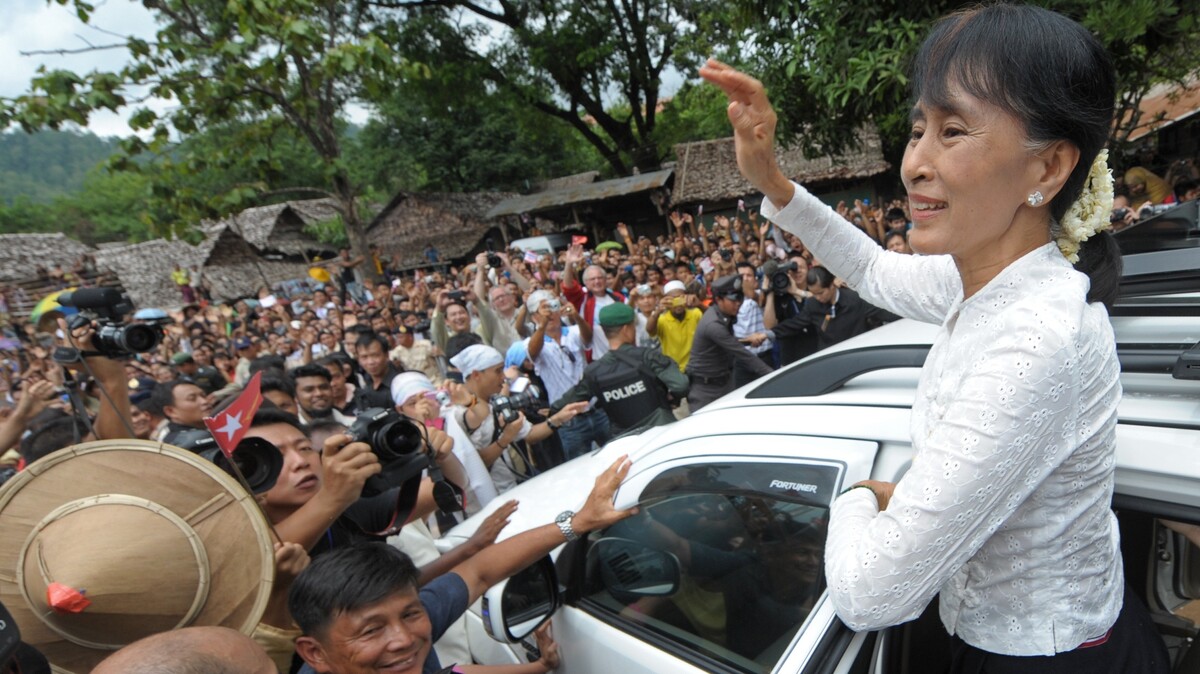 Myanmar's Aung San Suu Kyi is heading to Europe for the first time in more than two decades and will be giving a series of high-profile speeches She's shown here on June 2 meeting with Myanmarese refugees who are living in camps in Thailand.

Aung San Suu Kyi heads to Europe Wednesday, where she'll deliver a speech she was invited to give more than two decades ago: the one for her 1991 Nobel Peace Prize, which she was unable to collect while under house arrest.

In Myanmar's largest city, Yangon, at the headquarters of Suu Kyi's party, spokesman U Nyan Win says she is busy writing speeches for her extended trip to Europe, including the visit to Oslo for the belated Nobel address this weekend.

The journey will also take her back to Oxford, England, where she lived until 1988, before she became an icon of nonviolent political protest, and before Burma's then-military rulers changed the name of the country to Myanmar.

She'll be one of the few non-heads of state to address both houses of Parliament in London. In Dublin, she'll share a stage with Bono and U2.

"The [National League for Democracy] has stood firm for more than 20 years thanks in part to international support," says U Nyan Win, the spokesman. "We are stronger and more confident because of it. Lately, we have been trying to reform our party and we hope to hold a party congress later this year. This is a very crucial time for the party, and 'The Lady' needs the moral support of the international community."

Suu Kyi, or as everyone here calls her, The Lady, recently reminded foreign supporters not to get too euphoric yet about her country's limited democratic reforms. And she added that Myanmarese themselves will have to shoulder most of the burden of building their own democracy. 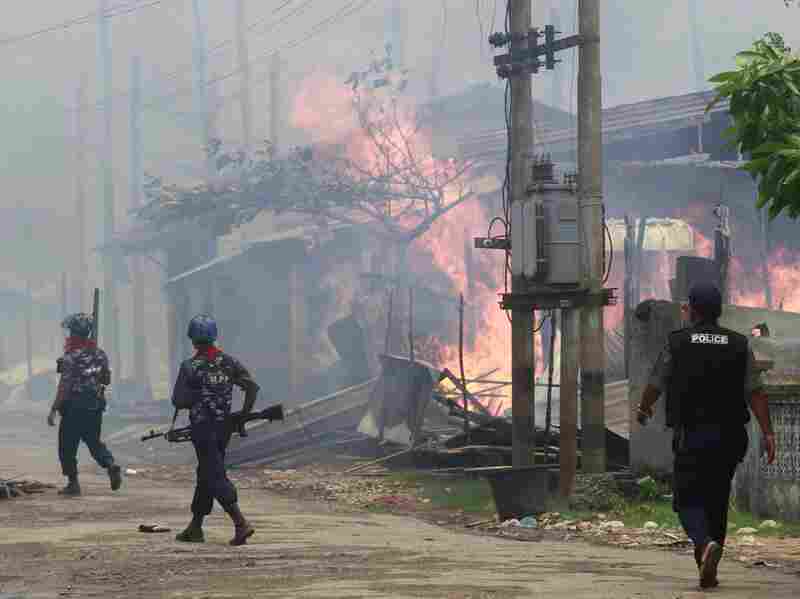 Policemen in Myanmar walk toward burning buildings in the town of Sittwe, in the western part of the country, where Muslims and Buddhists have clashed recently. Khin Maung Win/AP hide caption 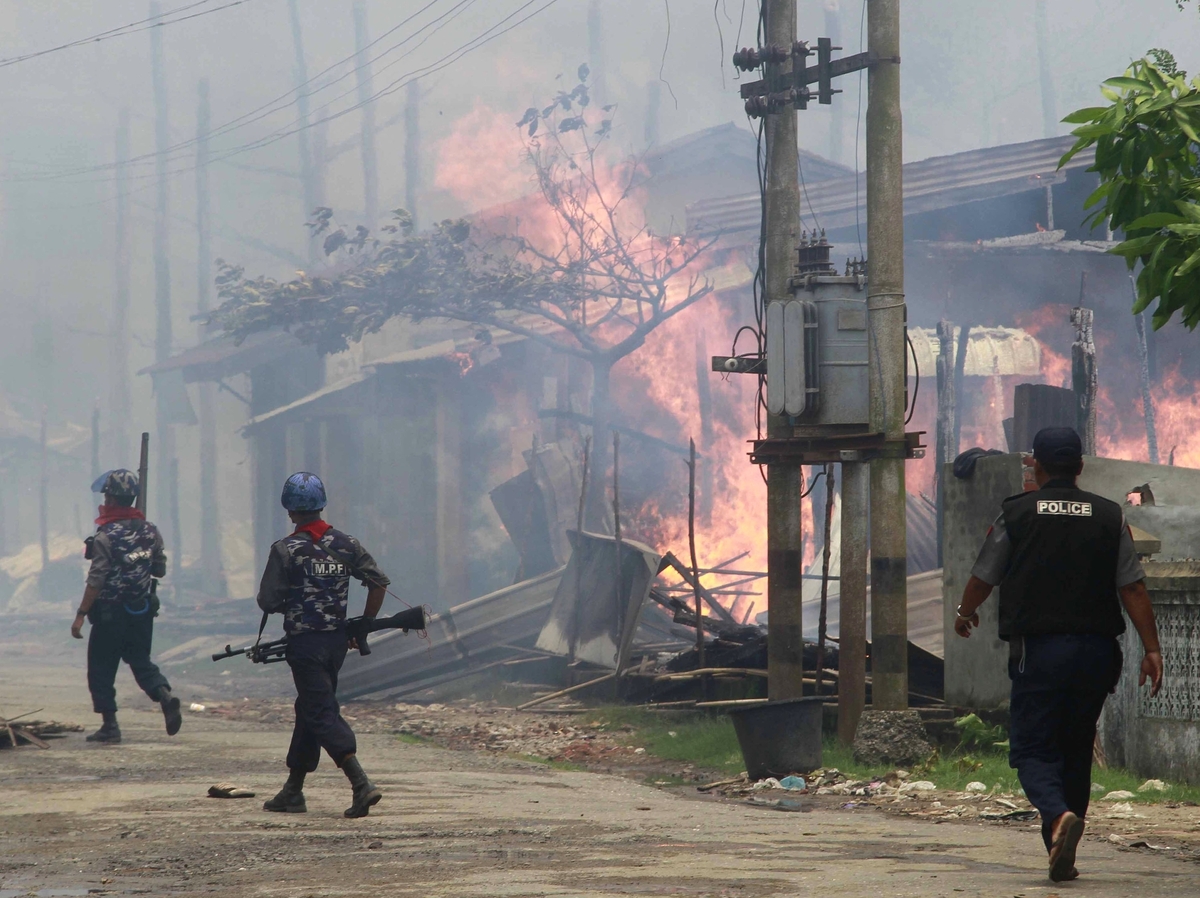 Policemen in Myanmar walk toward burning buildings in the town of Sittwe, in the western part of the country, where Muslims and Buddhists have clashed recently.

"I believe that sanctions have had great effect, politically," Suu Kyi says. "If they had not had such effect, the government of Burma would not have been so eager to have them removed. But in the ultimate analysis, we depend neither on sanctions nor on other external factors for real change in our countries. We depend on ourselves."

For now, domestic attention in Myanmar is focused not on Suu Kyi's travels but on ethnic and sectarian violence in Rakhine state, which borders on Bangladesh.

Reports last month that Muslims raped and murdered a Buddhist girl set off waves of mob violence and revenge killings.

Over the weekend, Buddhists marched around Yangon's Shwedagon Pagoda, calling for the government to enforce immigration laws and protect them from what they consider illegal Rohingya and Bengali immigrants.

"The extremist Bengali illegal immigrants have killed residents and burned down many villages," activist Kyaw Minn Khing told the crowd. "We call on the government to send more troops to protect the residents."

Meanwhile, Suu Kyi is trying to build the NLD from a protest movement into a political party that can win the 2015 general elections. The former ruling junta would not allow her to build party institutions, so the NLD has been completely dependent on her.

"This is very natural for the transitional period. Because of the longtime oppression, we have [a] lack of experience about democratization. So that's why for the time being, [we] just depend on the person," he says.

Next week, Suu Kyi turns 67. Most NLD leaders are in their 70s or 80s. The NLD is trying to restructure itself to become younger and more democratic. But they have not invited Ko Ko Gyi and his fellow activists to join them.

U Win Tin, 82, who founded the NLD in 1988 with Suu Kyi, says he is optimistic that the reorganization of the party will breathe new life into it.

"I hope, at the end of this party transformation, next year perhaps, we will be [a] well-organized and youthful and very active party," he says.

For now, U Win Tin soldiers on, still editing the NLD's newsletter and dealing with the growing number of reporters beating a path to The Lady's door.