Accessibility links
Venezuela's Chavez Aims To Beat Cancer, Election Foe In 13 years of colorful, often demagogic rule, Venezuelan President Hugo Chavez has run his country like a game show host with daily TV appearances. Then cancer struck, forcing Chavez to scale back. Now, he has reappeared, but his countrymen are wondering just how sick Chavez is as he prepares to run for re-election in October. 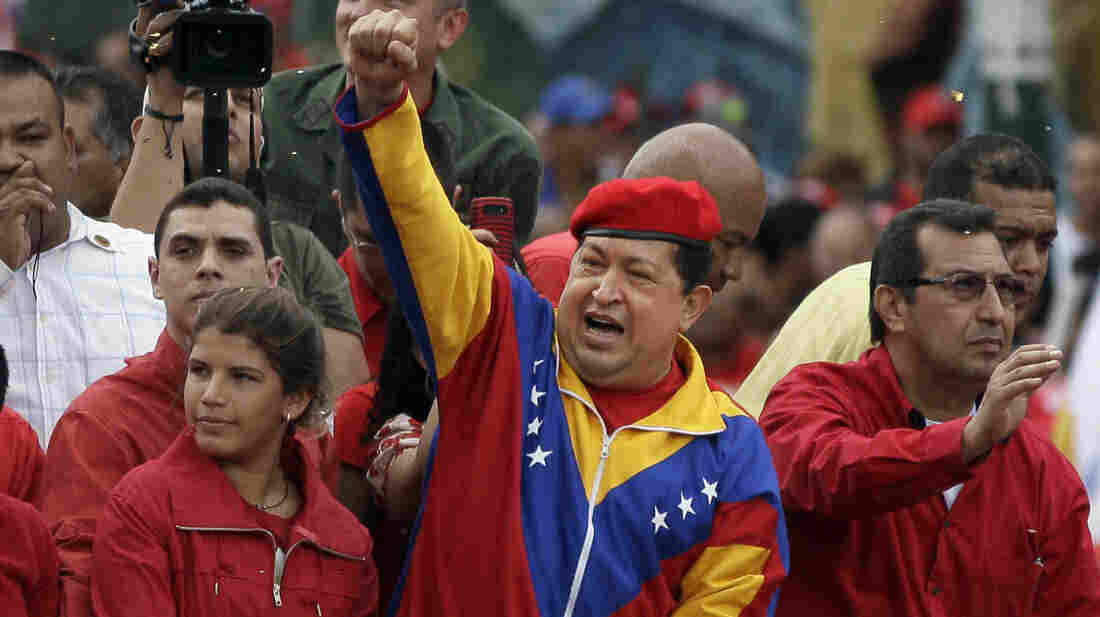 Venezuela's President Hugo Chavez arrives atop a truck at the elections office in Caracas on Monday. Chavez addressed thousands of supporters as he formalized his re-election bid. Chavez's younger daughter Rosines is by his side, and on his right is his brother Adan. Ariana Cubillos/AP hide caption 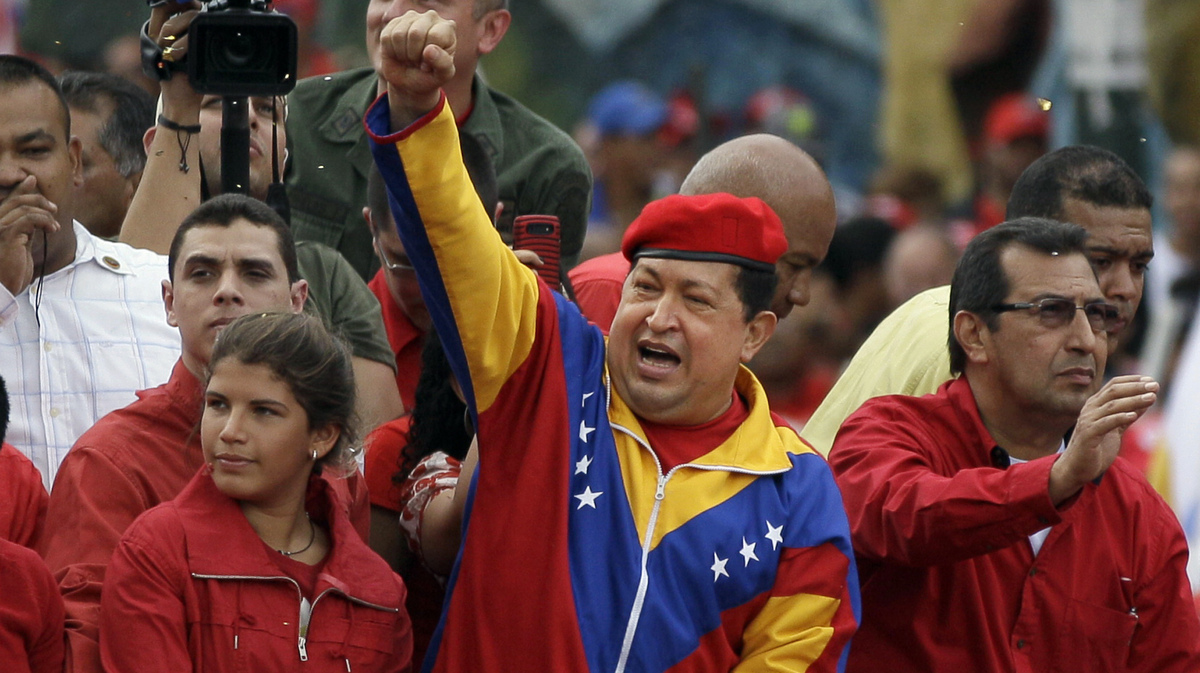 Venezuela's President Hugo Chavez arrives atop a truck at the elections office in Caracas on Monday. Chavez addressed thousands of supporters as he formalized his re-election bid. Chavez's younger daughter Rosines is by his side, and on his right is his brother Adan.

The crowds came out by the thousands in Venezuela on Monday, flooding the streets of Caracas in red T-shirts just as the nation's populist government had promised.

Hugo Chavez — the country's 57-year-old, bigger-than-life leader — then took the stage. He had arrived in an open truck, minutes after registering as a candidate for the Oct. 7 election.

For a moment, the man in the red beret looked like the leader of old: energetic, strong, unstoppable and oozing charisma. He sang to the crowd and also told his followers, "Here I am again, and in your name, in the name of the fatherland, I've registered as a candidate for another six-year term."

The Chavez who appeared at the rally is not the one Venezuelans have become accustomed to seeing since last June, when a tumor was discovered in his pelvic region. 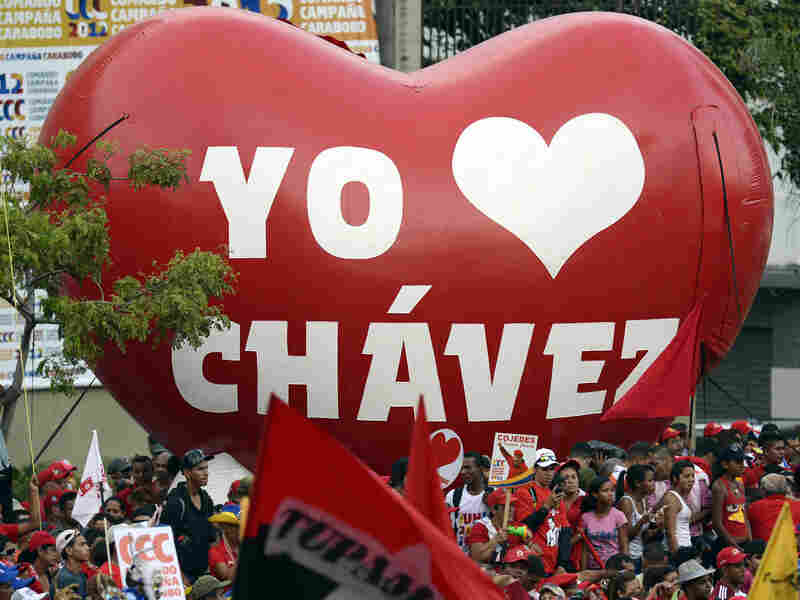 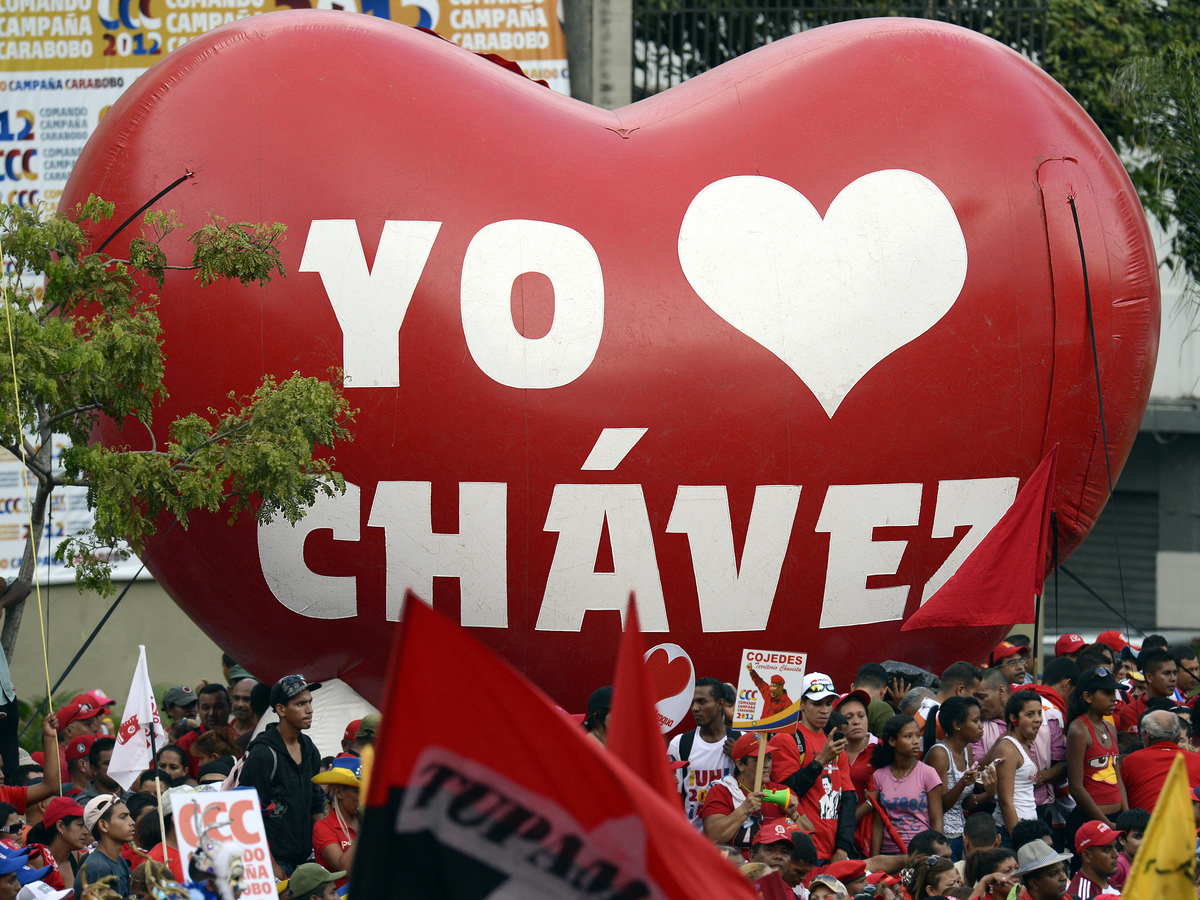 Thousands of Chavez followers took to the streets of Caracas for Monday's rally.

Since then, he's had two operations to extract the tumor, chemotherapy, a recurrence and then another surgery and radiation therapy. Suddenly, the man who had ruled in front of the TV cameras was rarely seen.

Venezuelans, however, have been largely left in the dark, says Miguel Otero, editor of the newspaper El Nacional.

"The real condition, nobody knows," Otero says. "I mean, it's a closed subject for everybody because they manage it in a very secret way ... but everybody knows he's sick because his performance as president is about one-tenth of what it was before."

Since his last surgery in February, Chavez has spent much of his time in Cuba, undergoing treatment. Instead of speaking to the public, his ministers have read his Twitter messages to crowds. Chavez also phones in to government-run broadcasts.

In a recent state television spot, he was shown gingerly walking in the presidential palace. Soft music played as a camera panned from head to toe, as if to assure viewers that it was him. In a televised Mass, he fought back tears as he asked God to spare his life.

"We'll see each other on Oct. 8," Rodriguez says, "and we'll confirm what I'm saying now, that Chavez is going to deliver a big beating to Capriles."

Still, some of those who've been closely following the saga say Chavez might be in serious trouble healthwise. Dr. Rafael Orihuela, a former health minister in Venezuela, says the recurring tumor discovered in February was not a good sign.

"I think the president is gravely ill but not on his deathbed," Orihuela says. He believes Chavez will only be able to campaign on a limited basis.

Back in the streets, where Chavez's supporters gathered to hear him speak, his illness seemed to be forgotten, for now. Marbella Pineda came decked out in red to cheer on El Comandante, as she calls him.

"I'm not worried," she says, "because I believe God is going to protect him and he'll beat this illness."