Accessibility links
Romney As Governor: 800 Vetoes And One Big Deal As the Republican governor of Massachusetts, Mitt Romney worked with the overwhelmingly Democratic state Legislature to pass a landmark universal health care law. But some lawmakers say a CEO style that may have worked for Romney in the business world didn't always help his ability to govern. 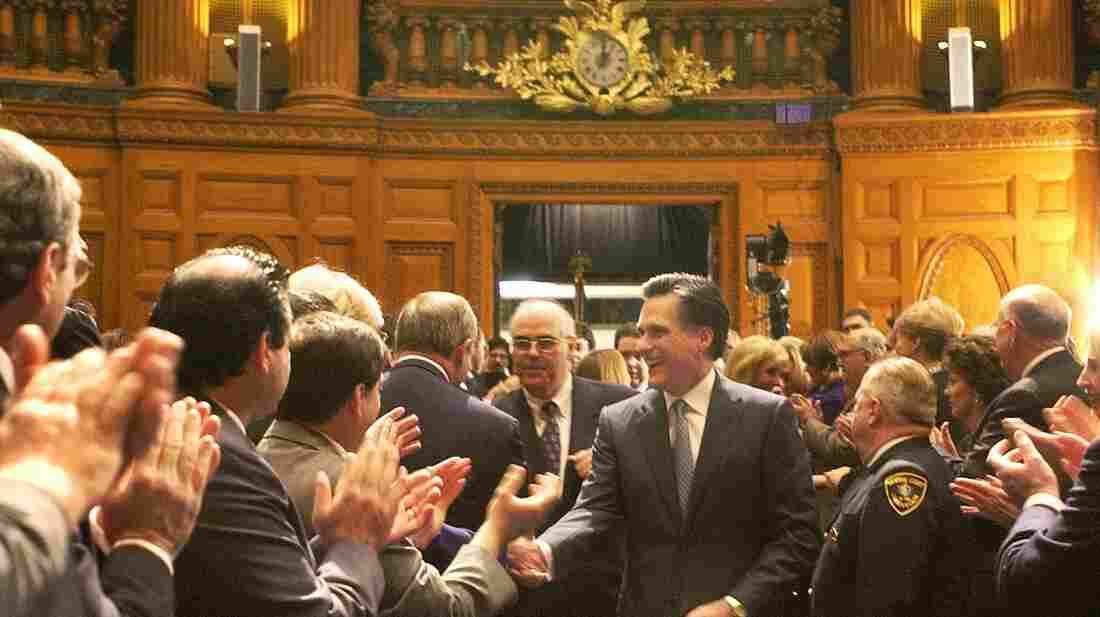 Mitt Romney, then the governor-elect of Massachusetts, walks into the House chambers during inaugural ceremonies at the Statehouse in Boston, on Jan. 2, 2003. Elise Amendola/AP hide caption 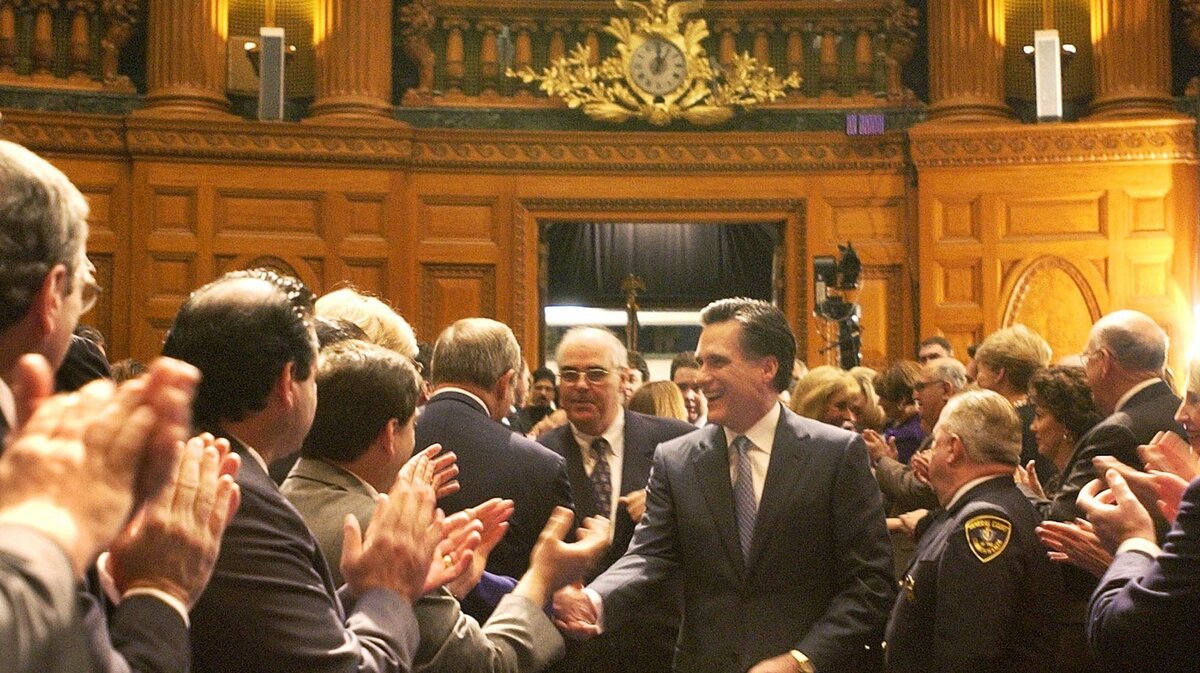 Mitt Romney, then the governor-elect of Massachusetts, walks into the House chambers during inaugural ceremonies at the Statehouse in Boston, on Jan. 2, 2003.

From now until November, President Obama and GOP presidential candidate Mitt Romney will emphasize their differences. But the two men's lives actually coincide in a striking number of ways. In this installment of NPR's "Parallel Lives" series, we look at how Romney, in his four years as governor, dealt with a Massachusetts Legislature controlled by Democrats.

Whether President Obama or Republican Mitt Romney comes out on top in November, the man who occupies the Oval Office next year will bring exactly four years of experience as a top political executive.

Obama has gotten his experience in the White House; Romney got his as governor of Massachusetts, from 2003 to 2007. 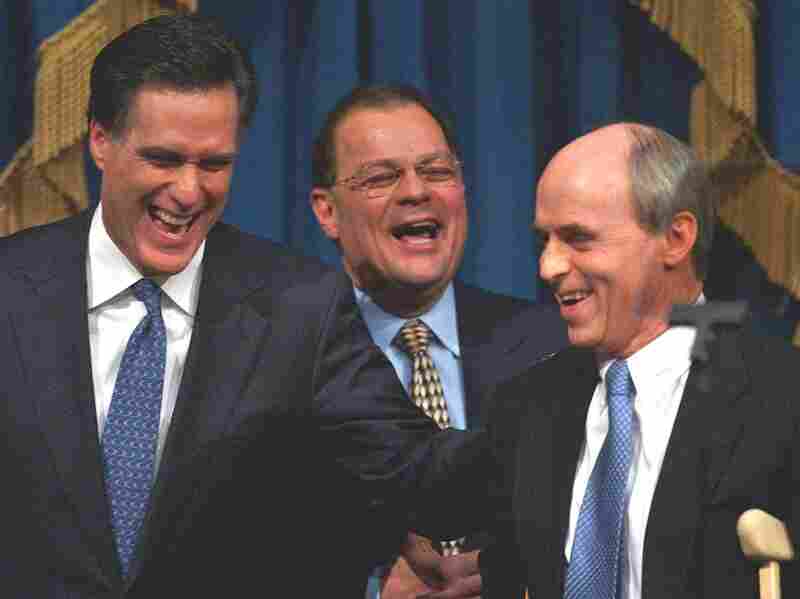 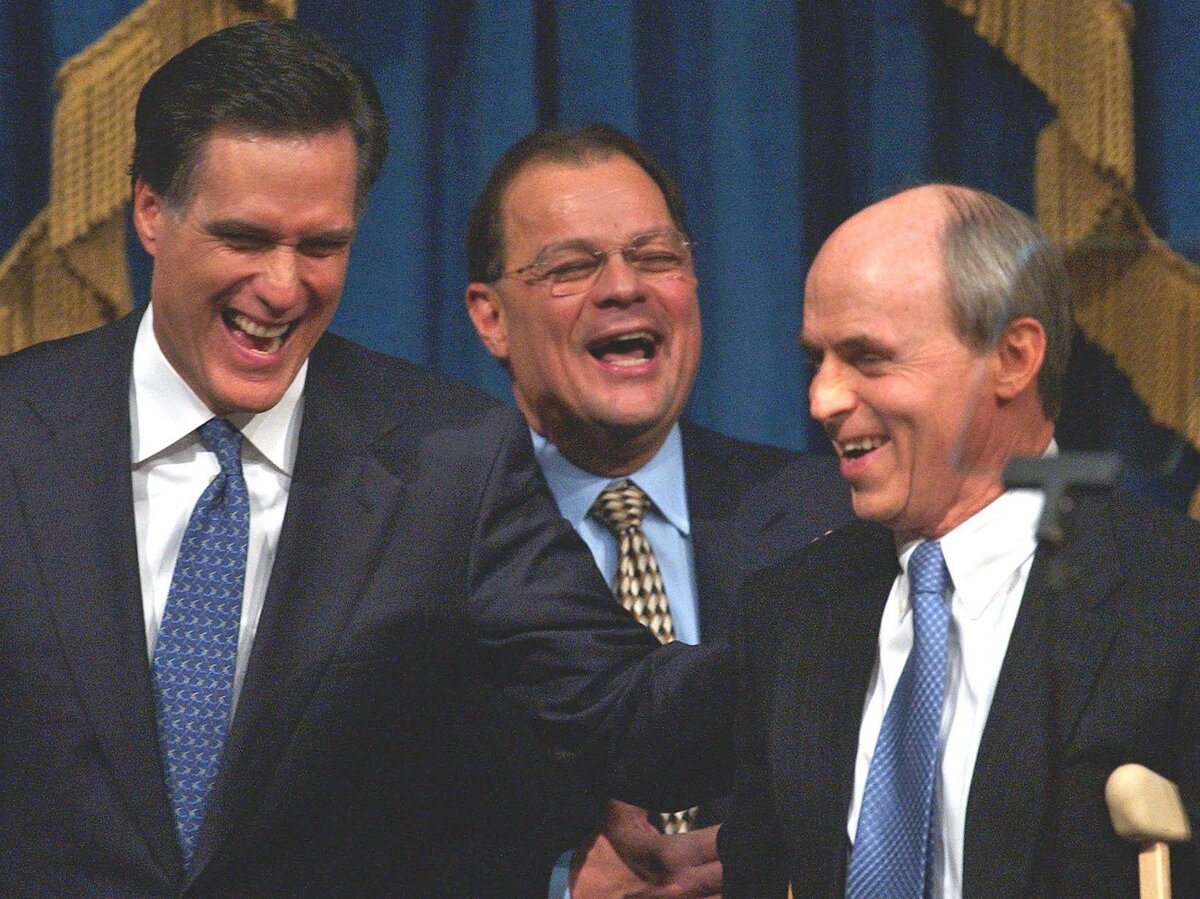 Romney shares a light moment with Senate President Robert E. Travaglini (center) and House Speaker Thomas Finneran before his State of the State address in 2004.

Romney clearly did not relish having to work with a Legislature that was 85 percent Democratic. He pushed hard during his first two years as governor to boost the number of Republicans on Beacon Hill. But that effort was a failure; Republicans ended up losing seats in the midterm elections.

Romney gave up on party building. "From now on," he told The Boston Globe, "it's me-me-me."

Within weeks, Romney had unveiled a universal health insurance plan that would become his signature accomplishment as he launched a 2008 bid for the White House.

Passing that bill meant working closely with Democrats, and at its ceremonial signing at Boston's Faneuil Hall, Romney spoke as a political uniter: "What is noteworthy is the uncharacteristic collaboration of so many individuals and groups and partisans," Romney said at the time. "And how did that happen? I think it's because of what this bill can lead to — every citizen with affordable, comprehensive health insurance."

At Romney's side stood Democratic Sen. Edward Kennedy, who died in 2009. The two men had debated sharply on the same stage in 1994 during Romney's unsuccessful bid to unseat Kennedy. But in 2006, Kennedy had only praise for Romney: "To our governor, and to our Senate president and our speaker, we all say, 'Well done.' "

"He was capable, you know, when he was willing to, to get down in the trenches, [to] cut deals, pigeonhole legislators, to get his reform health care package through," he says. "And he did with remarkable success."

But apart from health care, Romney defined success not with big-picture legislative accomplishments but with confrontation. In a 2008 campaign ad, Romney actually bragged about taking on his Legislature: "I like vetoes; I vetoed hundreds of spending appropriations as governor," he said.

Romney issued some 800 vetoes, and the Legislature overrode nearly all of them, sometimes unanimously. 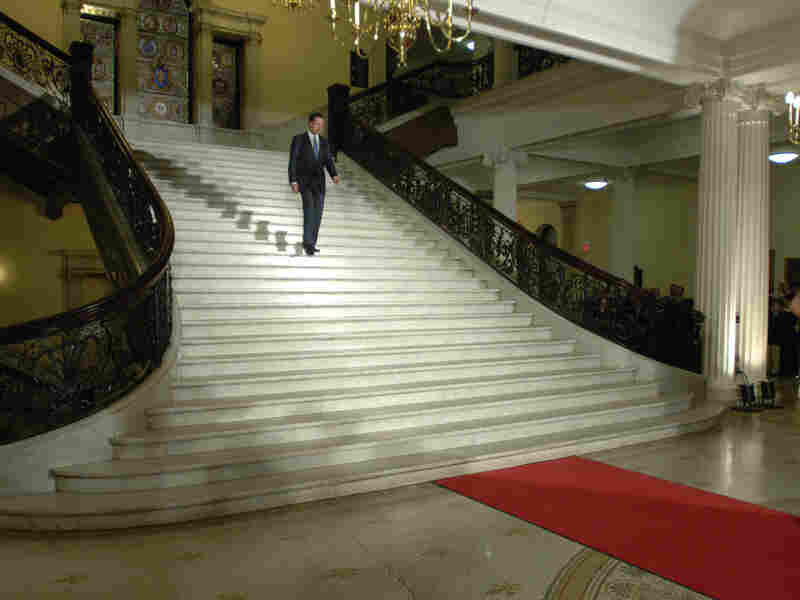 Romney walks down the central staircase inside the Statehouse during a ceremony marking the end of his term as governor on Jan. 3, 2007. Josh Reynolds/AP hide caption 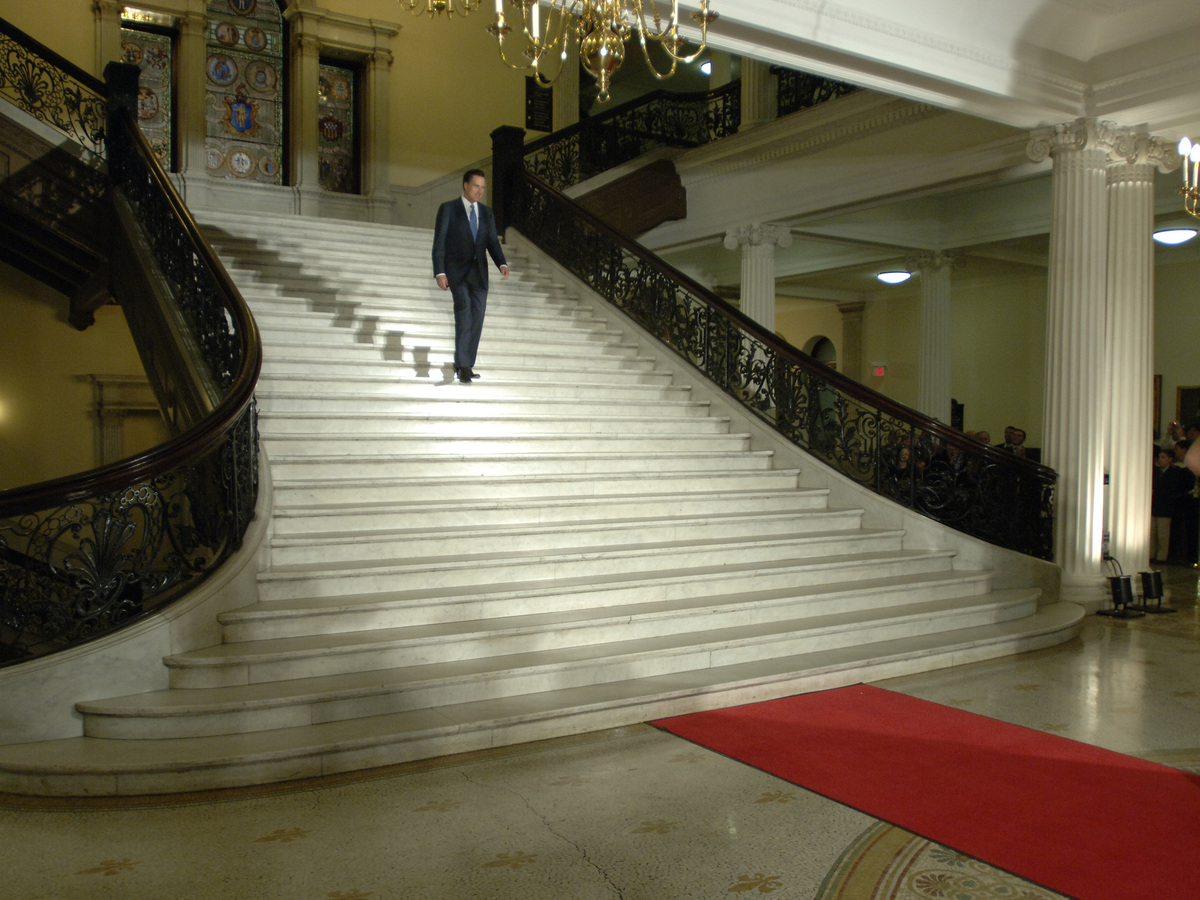 Romney walks down the central staircase inside the Statehouse during a ceremony marking the end of his term as governor on Jan. 3, 2007.

At a recent Obama re-election rally on the steps of the Massachusetts Statehouse, Democratic legislator Pat Haddad was heckled by Romney supporters as she issued this warning, suggesting that if Romney is elected president: "You're gonna get the same guy who never wanted to engage the Legislature. He never wanted to look for new jobs; he was always only looking for his next job."

But Romney campaign spokesman Ryan Williams says that's just the kind of flak you get for having been a governor who shook up the status quo: "Obviously, when you do that and make the tough decisions, you're not going to make friends everywhere."

Especially not in the Statehouse, where Romney's office was just down the hall from the House chamber.

Standing outside that chamber, Democrat Ellen Story recalls a Gov. Romney who had a policeman screen visitors and who did not allow lawmakers to use the bank of elevators just outside his office:

"He was aloof; he was not approachable," Story says. "He was very much an outsider, the whole time he was here."

And Story remembers something else about the former governor: "The Republican reps would grumble that he didn't even know their names."

George Peterson was one of those Republicans; he does not take issue with his colleague's characterization of Romney: "It took him a little bit to get used to dealing with elected officials, let's put it that way," he says.

"The first year was, I'd say, a struggle," Peterson says. "He was used to being a top executive, 'and this is where we're going, and this is how we're going to do it.' And this animal [the state Legislature] doesn't work that way. Not at all. Especially when it's overwhelmingly ruled by one party."

"He walked into a very difficult situation, and I think the fact that he was able to close the budget gap without increasing income or sales or any other broad-based tax, No. 1. And No. 2, he was able to control spending."

At the time, Tisei says, people in Massachusetts really appreciated Romney's effort. Still, this week, the Obama campaign came out with a new ad that aims to turn Romney's time as governor against him, saying the state under Romney had "one of the worst economic records in the country."

But by the end of his term, Romney's approval rating in Massachusetts was only 34 percent. In recent polls, the number has barely changed.

For political historian Whalen, that's not surprising: "I think Romney's biggest problem here in Massachusetts is not that he necessarily did a disastrous job. He didn't. But he raised the expectation bar so high that, you know, he just didn't deliver. "

Which is the same critique often leveled against the president whom Romney seeks to unseat.