Accessibility links
Movie Review - 'That's My Boy' - Exploring the Far Reaches of Vulgarity Adam Sandler stars as the beer-swilling Donny, who reunites with his son (Andy Samberg) before the latter's wedding. Critic Scott Tobias says this movie about the virtues of juvenile crassness showcases an extreme, R-rated version of the Sandler we met 20 years ago in Billy Madison.

'That's My Boy' Explores The Far Reaches Of Vulgarity

'That's My Boy' Explores The Far Reaches Of Vulgarity 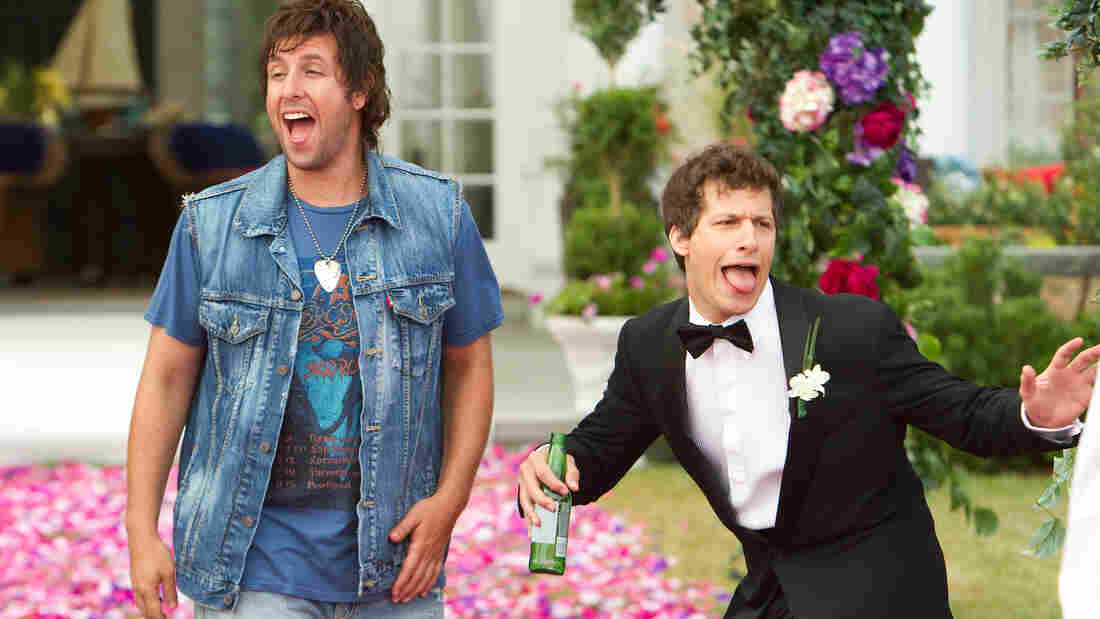 Rated R for crude sexual content throughout, nudity, pervasive language and some drug use

Like the twisted love child of Van Halen's "Hot for Teacher" video and the Mary Kay Letourneau scandal, the Adam Sandler comedy That's My Boy opens with a middle-school Lothario bedding — and later impregnating— a sexually voracious instructor.

If their genders were reversed, That's My Boy would be cause for a congressional hearing. But in a film defined by juvenile fantasy, the kid becomes not only the class hero, but an '80s cultural icon on par with Vanilla Ice and Diff'rent Strokes' Todd Bridges (both of whom appear as themselves.)

Right off the bat, That's My Boy introduces what passes for a central theme: Don't be so sensitive, dude. What the stuffed shirts might call irredeemably tasteless, this movie calls politically incorrect, which is why the judge who hits the teacher with a 30-year statutory-rape sentence is depicted as a prudish harridan.

And the irreverence doesn't stop there: How about a 10-minute autoerotic session inspired by a sexy octogenarian? Or an obese stripper scarfing down eggs and orange juice mid-routine, while hanging backwards from a pole? In Sandler, boorish louts have finally found their champion.

After the prologue, That's My Boy cuts to the present day as Donny (Sandler), having long exhausted his 15 minutes of fame, faces jail time if he fails to pay years in back taxes. Though he raised his son Todd (Andy Samberg) as a single dad, the two haven't seen each other since Todd's 18th birthday, when the boy left his irresponsible father, changed his identity and eventually found success as a Wall Street hedge-fund manager. When Donny sees notice of Todd's upcoming wedding to uptight golddigger Jamie (Leighton Meester), he takes the opportunity to reconcile with his son and coax a little money out of him.

Donny and Todd are a study in extremes. Donny is a fouler version of the standard Sandler man-child, callous and puerile on the outside but soft as a turtle's belly-meat underneath. By contrast, Samberg's Todd is uptight and ineffectual, bowing to his fiancee's constant browbeating and reacting to adversity by stroking a fresh pair of underwear like a security blanket. 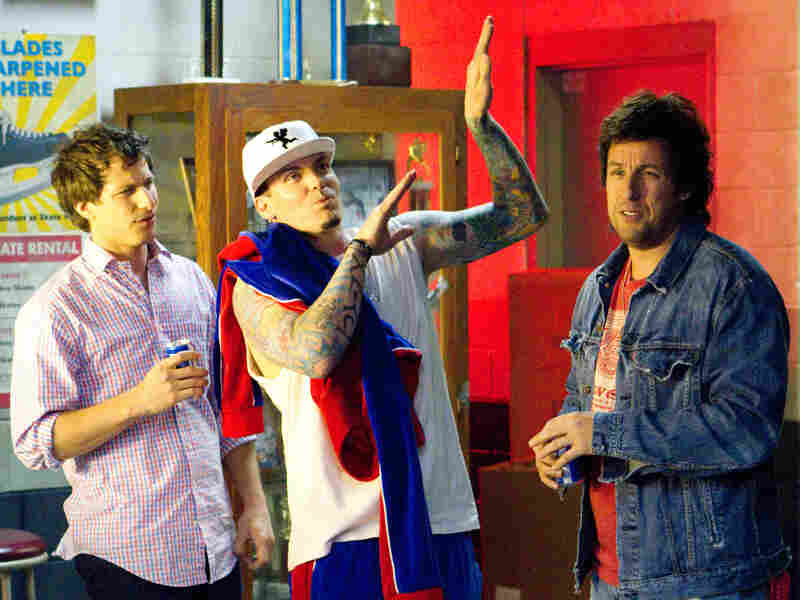 Vanilla Ice (center) appears as himself in That's My Boy, a film whose protagonist (Sandler) was himself famous — or at least notorious — for about 15 minutes. Tony Rivetti/Columbia Pictures hide caption 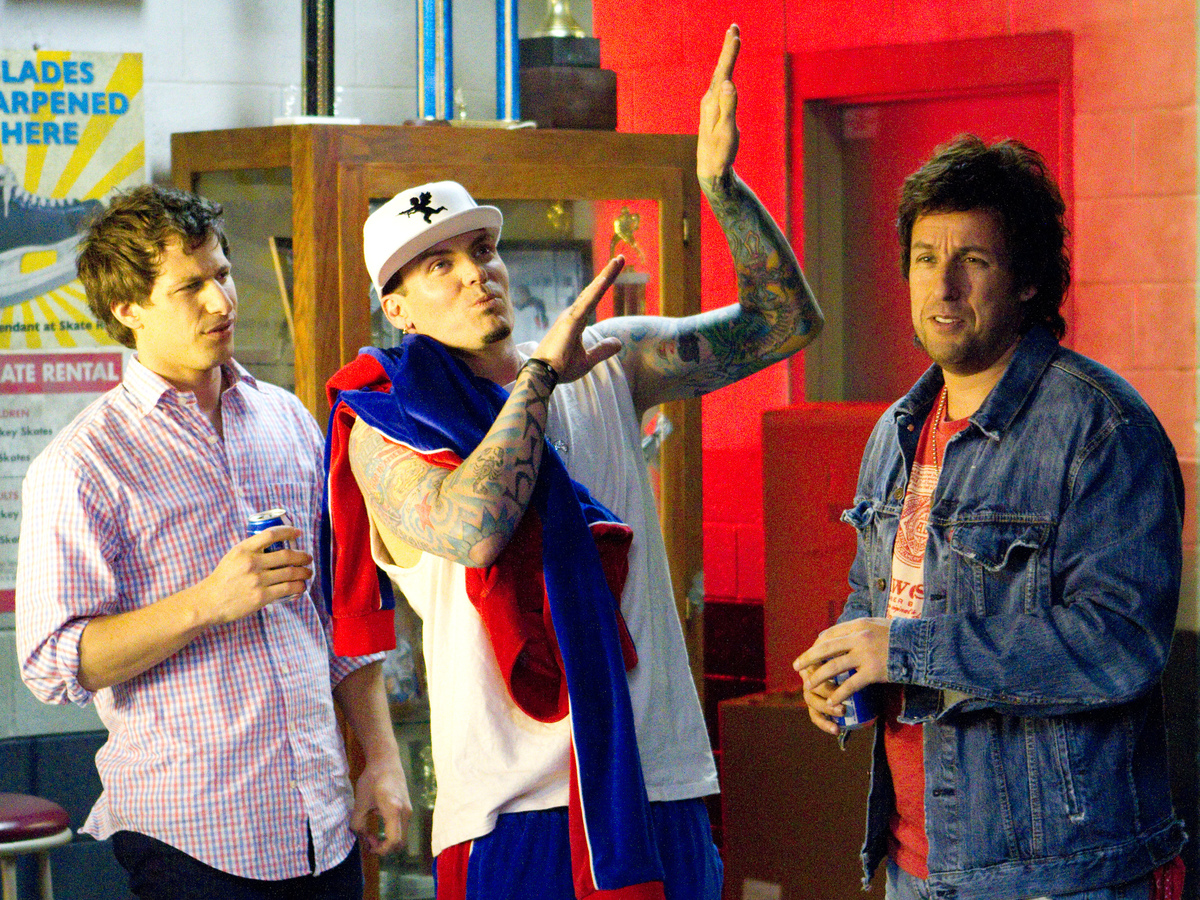 Vanilla Ice (center) appears as himself in That's My Boy, a film whose protagonist (Sandler) was himself famous — or at least notorious — for about 15 minutes.

Todd has reason to be bitter about his upbringing — a diet consisting entirely of sugary treats has left him diabetic, and he was never taught simple things like how to swim or ride a bike — and for that, Donny can only apologize.

Yet the push and pull between Donny and Todd doesn't bring them somewhere toward the middle, as might be expected. From the film's warped perspective, Todd just needs to loosen up and be more like his beer-swilling dad, which means no more spa treatments, no soirees that don't detour through a strip club, no avoiding conflicts that can be resolved with a good 'ole sock in the jaw. That's My Boy isn't a comedy about a regressive '80s burnout who never grew up, but a paean to the virtues of remaining the same vulgar, bullying nincompoop at 40 that you were at 14. Not exactly the stuff of public-service announcements.

Normally forced to sanitize his blue-collar antics for a PG-13, Sandler and his collaborators play their R-rating to the hilt, mostly by adding stomach-turning gross-out jokes to the wedding-themed raunchiness of hits like The Hangover. But much like Donny, the Sandler of today hasn't changed much from the Sandler who introduced himself in Billy Madison nearly 20 years ago. He doesn't just appeal to the lowest common denominator — he's its jock-scratching embodiment.