Accessibility links
Bickering Through The Alien Invasion The Spanish romantic comedy Extraterrestrial sets up the threat of an alien invasion only to spend its running time exploring the intertwined love lives of four urbanites. The gimmick falls flat, critic Andrew Lapin says, thanks to an uninteresting plot and set of characters.

Bickering Through The Alien Invasion

Bickering Through The Alien Invasion 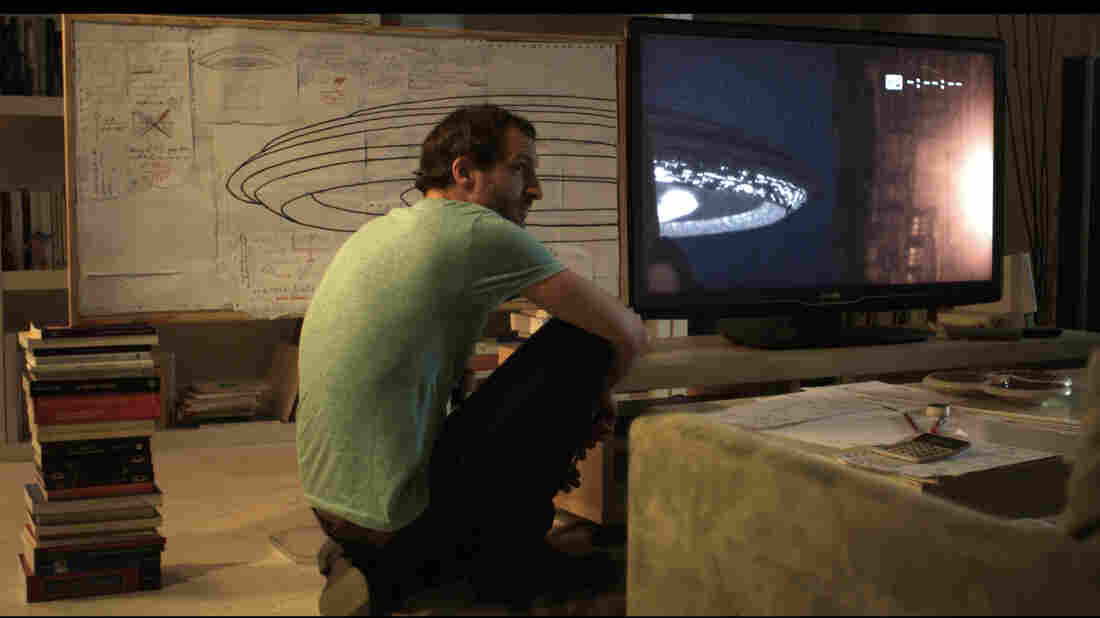 Julián Villagran stars in Extraterrestrial as Julio, a young man who wakes up one morning in a beautiful woman's bed having missed the UFO landing that occurred while they slept. Focus World hide caption

Outer space is a magical place, isn't it? As a storytelling device it's nonpareil — as soon as the writer has introduced the possibility of a leap to the stars, anything goes imagination-wise. The restrictions of primitive Earthling reality no longer need apply.

It's truly odd, then, to witness a film like Extraterrestrial, a Spanish production that brings a flying saucer down to our world and then has it just hover there, gathering space dust while the protagonists bicker over who's sleeping with whom. The streets are deserted and the army is rounding up civilians somewhere in the distance, but we're left following the folks who would rather just stick with their terrestrial problems, thank you very much.

One assumes this is meant as satire, a Nero-fiddling-while-Rome-burns scenario, but because the production is so constrained in scale it's tough to be sure. Writer-director Nacho Vigalondo is like a man who, when presented with an all-you-can-eat buffet, only stacks his plate with grilled cheese. And it's not like there's anything wrong with grilled cheese, but if that's all you wanted, why go to a buffet?

The threat of aliens does penetrate the consciousness of the film's hip young urbanites enough to serve as a minor catalyst. We join Julio (Julian Villagran) as he stirs after a hazily recollected night. He soon discovers that he was somehow fortunate enough to woo and bed the gorgeous Julia (Michelle Jenner), but this bragging right becomes a liability: The two of them must invent stacks of lies to throw off both Julia's creepy neighbor Angel (Carlos Areces) and her easily excitable boyfriend, Carlos (Raul Cimas).

That's where the UFO, which has descended and provoked a mass evacuation while our heroes were sleeping, comes in handy. One rumor about otherworldly beings assuming human identities, and Julio and Julia easily start casting suspicion elsewhere.

The quartet, for whatever reason, elects to stick it out in the apartment building rather than seeking out family, safety or any assurance that they're not the last surviving members of the human race. So we mostly remain in and around Julia's digs, waiting to see if anyone will become "outed" as a Thing From Another World.

Vigalondo doesn't seem to care whether his characters win us over, though. Their personalities are grating, their motives muddled, their love lives inherently uninteresting. Julia, about whom we learn little, flits between her eligible males at whim like a schoolgirl — sometimes while the men are in the same room. She has a thing for the oblivious type. 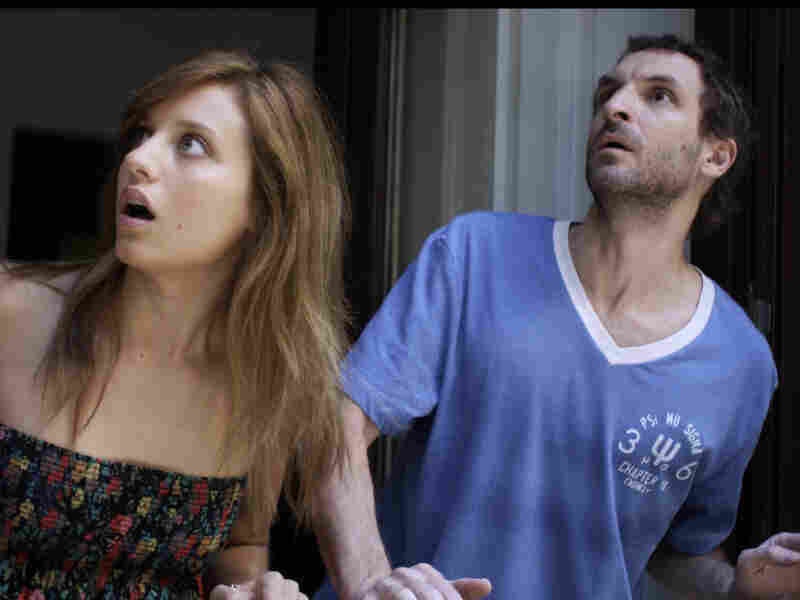 In Extraterrestrial, Julia (Michelle Jenner) and Julio use the alien arrival to divert attention away from their one-night stand. Focus World hide caption 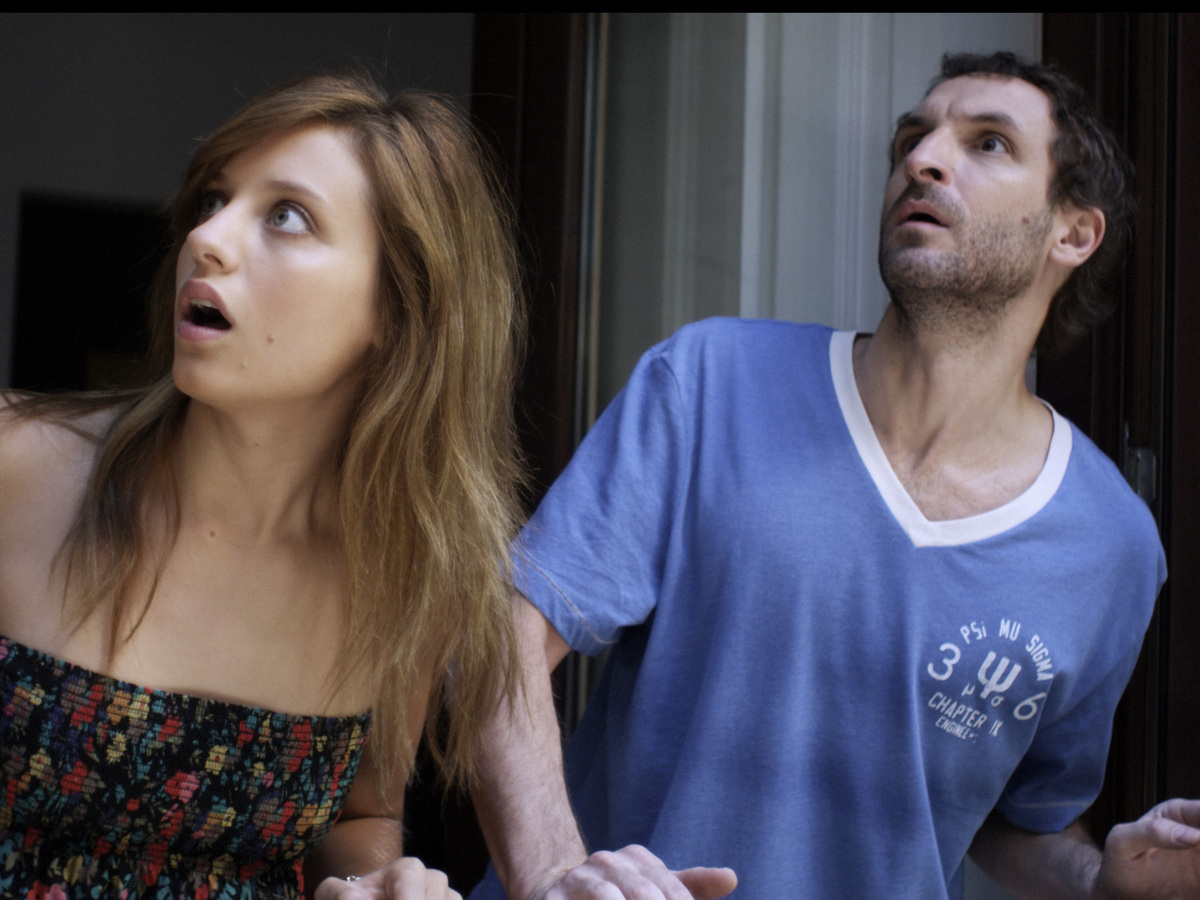 In Extraterrestrial, Julia (Michelle Jenner) and Julio use the alien arrival to divert attention away from their one-night stand.

The boyfriend fares the best: He turns out to be a zealous survivalist willing to go to extreme lengths to combat the conspiracy theories in his head. Credit the manic energy Cimas brings to his character's rapid-fire leaps of logic.

Really, the apartment is the prototypical "bunker" or "isolated research station" one might find in Alien or The Thing, only with fancy wine and illicit affairs replacing worried-looking scientists furrowing their brows at a computer screen. But the movie doesn't seem to realize it's created this parallel, and nothing comes of it.

Extraterrestrial is not a missed opportunity simply because it refuses to engage fully with its premise. There's the question of artistic intent to consider, after all. Does Vigalondo not do exactly what he set out to do? He has made a narcissistic romance that only peripherally notices the sci-fi whirring overhead, and if you were rooting for the sci-fi, that's your mistake.

No, the problem is that the romance itself isn't engaging enough to justify such an outlandish approach. There is originality, certainly. But Vigalondo teased us with the moon and the stars, and delivered only the terrestrial.