Accessibility links
Mozambique Farmland Is Prize In Land Grab Fever Villagers say they're getting a raw deal as companies rush to buy up African land to form mega-farms. Farmers complain they've been ousted from the land while promises to improve water systems and schools and replant uprooted crops are not being kept.

In these days of financial uncertainty, the hot new investment tip is farmland.

This spring, 750 Wall Street types crowded into New York's Waldorf-Astoria Hotel for a conference on investing in global agriculture. Philippe de Laperouse, managing director of HighQuest Partners, which organized the event, says those investors started out just looking for a safe haven for their money. But with food demand up and future production uncertain, many of them have caught the scent of future profits.

Many development NGOs and advocacy organizations have sounded an alarm about this surge of private money. (Here are critical reports from GRAIN, Oxfam, the Oakland Institute and even that paragon of mainstream thinking, the World Bank.) Many of them call it a global "land grab."

Investors, naturally, see opportunity for everyone. Jes Tarp, CEO of Aslan Global Management, says "Africa has a tremendous future in terms of agriculture. Africa could feed much of the world." 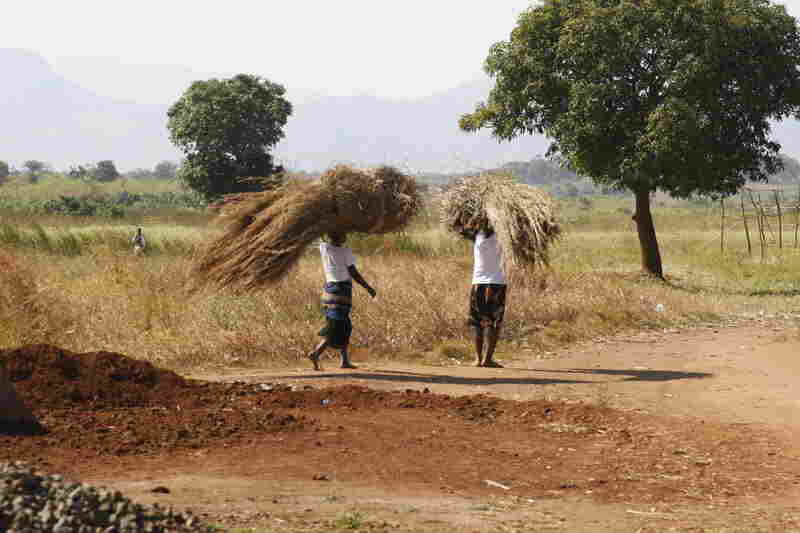 Farming, like most other tasks, is done by hand in rural Mozambique. Dan Charles/NPR hide caption 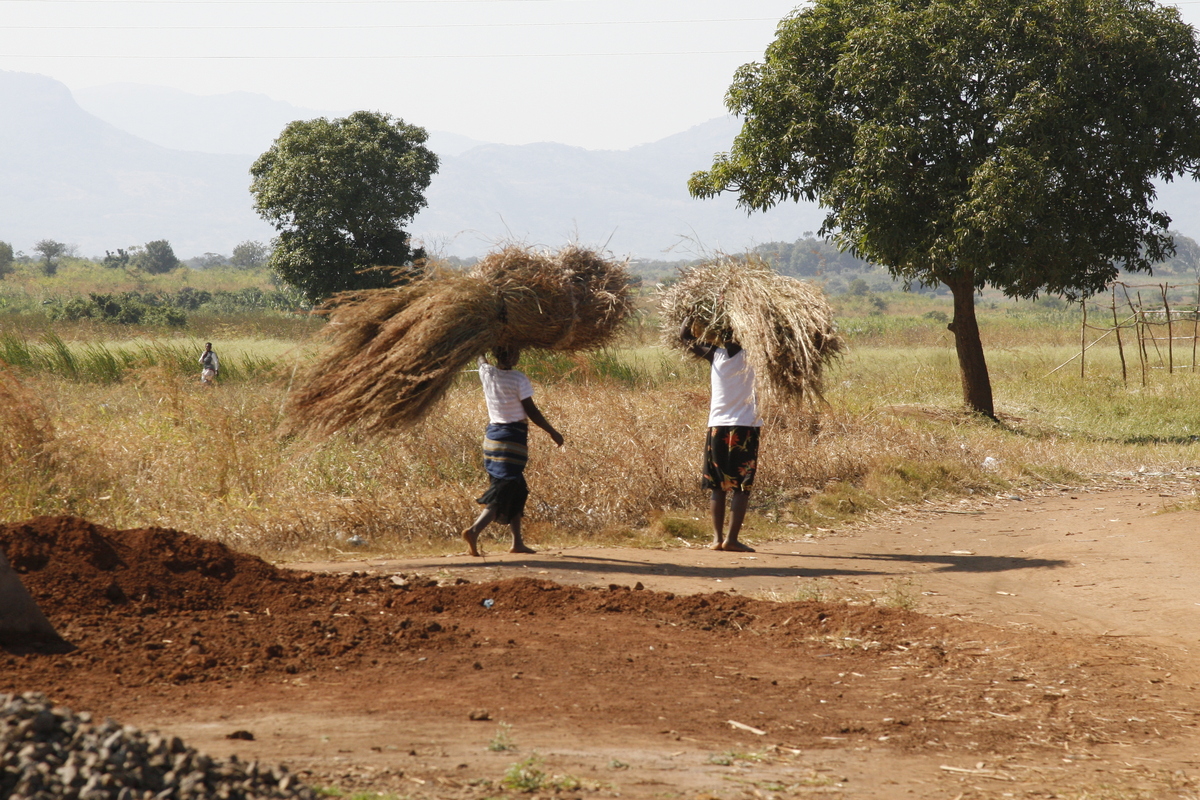 Farming, like most other tasks, is done by hand in rural Mozambique.

I decided to take a closer look at the reality behind this rhetoric and went to Mozambique, which has become a hot spot in the global rush for land. It's a country in southern Africa with beautiful beaches and also extreme poverty.

Mozambique is a little bigger than Texas, and with slightly fewer people. It has a lot of land, and in many areas, a good supply of fresh water.

Nobody can actually buy land in Mozambique. The government owns it all. But the government will give companies exclusive rights to land for 50 or 100 years, and it's really cheap. Mozambique's government, in fact, has been encouraging investors to come take advantage of this land.

Dozens of companies, both foreign and local, have lined up to seize the opportunity, setting up mega-farms that cover thousands of acres. (You can find a list of land deals in Mozambique and many other countries in databases compiled by the Land Matrix or by GRAIN.)

One of these farms has landed right beside a small village called Ruasse, in northern Mozambique.

Getting there takes work. In my case, it meant bouncing along 60 miles of dirt road, passing a steady stream of people walking along the side of that road carrying firewood and bags of corn.

Ruasse is a collection of one-room brick houses with thatched roofs, scattered across hard-packed dirt. People here survive mainly on the crops they can grow on the land nearby.

Caterina Alberto, one of the most prosperous farmers in this village, says the arrival of a huge farming enterprise next door was a shock. "It was said that a company was coming here. But no one told us that the company was coming to destroy us," she says.

The company, in this case, is Quifel Natural Resources, based in Portugal.

Here's what happened, according to Alberto and others in the village.

Representatives from the company showed up in Ruasse several years ago with a proposal. They explained that Quifel Natural Resources, through a subsidiary called Hoyo-Hoyo Agribusiness, hoped to grow cash crops — sunflower, sesame and soybeans — on the land across the road from the village. (There's expanding demand for those crops in Mozambique, both for oil and for animal feed.) 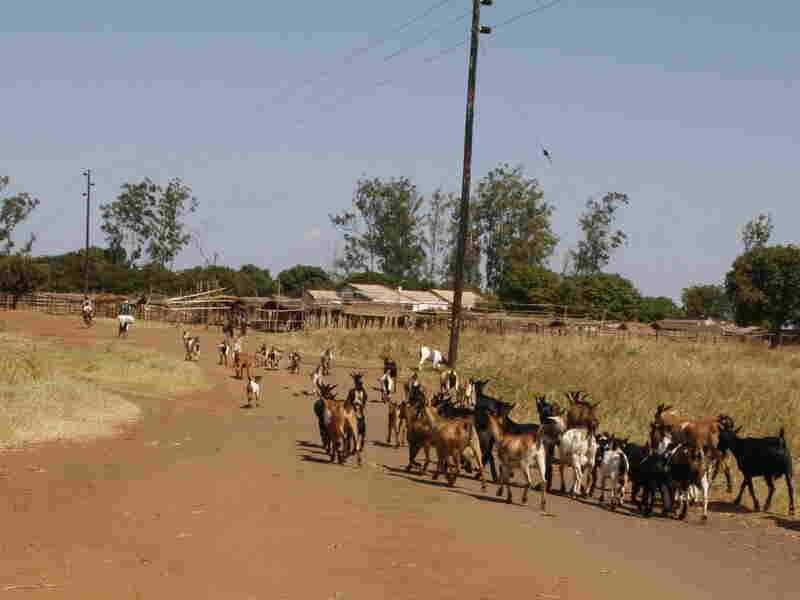 A herd of goats in the village of Ruasse. Notice the power lines — Ruasse is lucky to have them. Many villages in northern Mozambique don't have access to electricity. Belchion Lucas for NPR hide caption 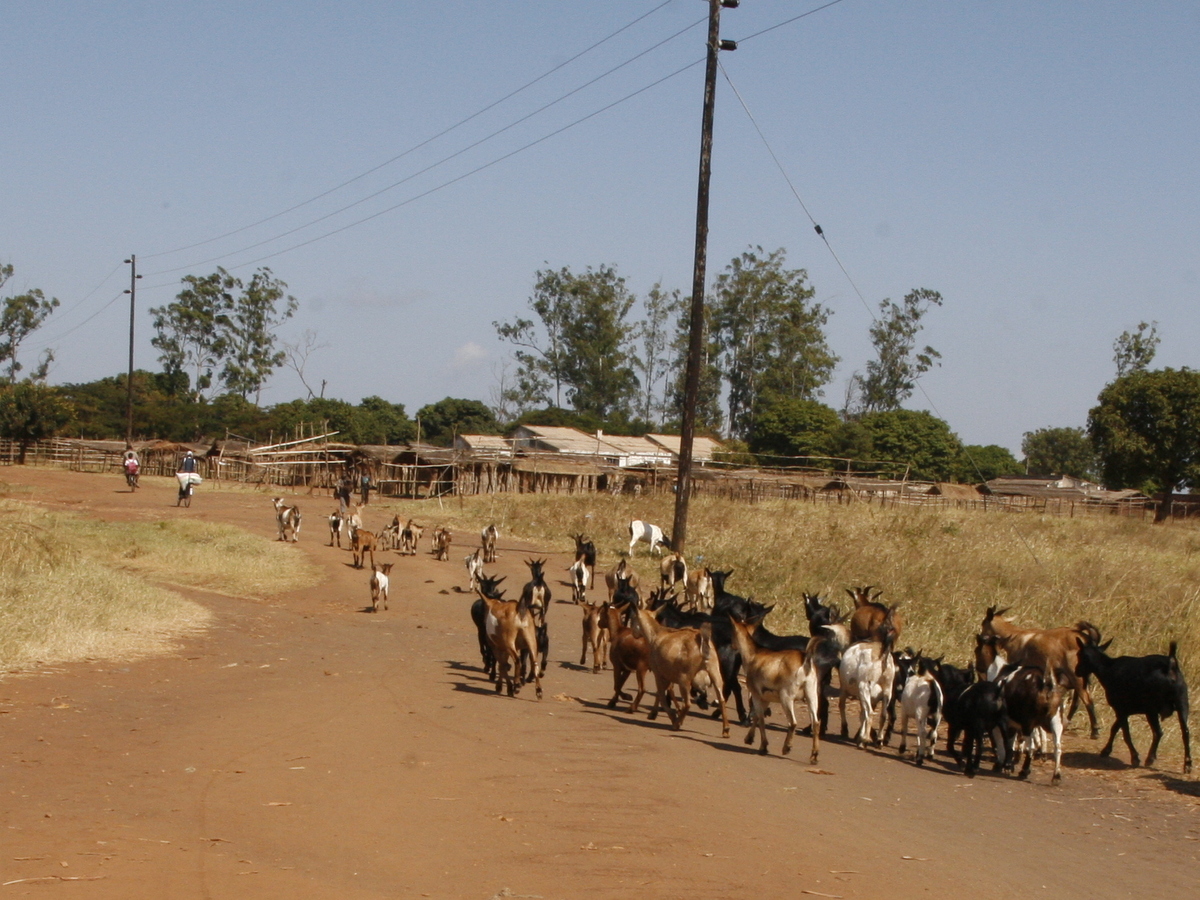 A herd of goats in the village of Ruasse. Notice the power lines — Ruasse is lucky to have them. Many villages in northern Mozambique don't have access to electricity.

Most of the people in Ruasse were already growing crops on that land. It's some of the most desirable land for miles around. It's fertile and flat. Decades ago, a state-run company cleared that land and grew soybeans for a few years, but that farm fell apart during Mozambique's civil war in the 1980s.

Alberto says Quifel Natural Resources made a lot of promises: that it would pay local farmers for any land that they might lose; that it would clear new land for them somewhere else; that it would drill a well for the village, and improve the school and clinic.

So the people of Ruasse said yes. And the national government gave Quifel Natural Resources rights to the land in December 2009.

The company never followed through on its promises, she says. "As soon as they got here, with all their gear, they just went ahead and started their work. They went into the places where people had already planted corn, banana trees and sugar cane."

In fact, she says, the company plowed up crops that farmers were almost ready to harvest. She lost about 10 acres. None of the farmers got any money or new land.

It's still happening. Two men showed me the spot. One of them, Francisco Muine Penaciaia, is trembling with anger. The other, Vitorino Munalile, a very old man, shows no emotion at all. He's barefoot and has trouble walking across the rough, freshly plowed ground.

Penaciaia shows me the land where both farmers' crops once stood. He says they were growing sorghum, corn and cassava, both to feed themselves and to sell, so they would have money to buy food later.

Munalile says now he has only a little food to get through the coming winter.

The farmers say the company never paid them any money for the crops it destroyed. "They always say that they'll pay, but they never do," says Munalile.

Hoyo-Hoyo Agribusiness hasn't yet drilled the well that the village wanted. People here still carry their water from a nearby stream, and on the day I was in Ruasse, the company's small fleet of John Deere tractors was hauling big tanks of water from that stream to some newly planted potato fields. Alberto says that's another big problem.

"This whole community has just one river; this one here," she says, gesturing toward the stream. By the month of August, this river will be all dry. That's why the population is complaining. So you see the situation we're in."

She says that villagers have complained to local government officials, but the government hasn't done anything to help them.

This conflict, however, is now getting increasing attention. It was the subject of a presentation at a high-profile conference on land issues at the World Bank in April.

I reached the CEO of Quifel Natural Resources, Rui Laurentino, in his office in Lisbon. Laurentino says that the company will soon start what he calls the "social component" of its project. That plan, he says, includes improving Ruasse's medical services and school. He also says that the company plans to pay farmers for land that they've lost. Those payments, he says, "are imminent." And he says that since my visit in May, the company has started to clear new land for those farmers.

Not Just An Isolated Incident

According to many observers at farmer advocacy organizations and at the World Bank, such conflicts are a common feature of large land deals in Africa. It's not just in Mozambique; it's in Tanzania, Ethiopia and Sierra Leone, too.

In many cases, poor villagers who use the land don't have formal control over it and don't have a voice in decisions to lease or sell the land to big investors. Those decisions are typically made by village chiefs or political leaders in national capitals.

Joao Muthombene, executive director of Mozambique's Christian Association for Community Development, says local communities in his country do have legal protection — on paper. "There's a law that says you have to negotiate with communities. But what we have seen is that no company is taking it seriously."

Yet Muthombene doesn't think it has to be this way. The fact that companies are interested in Africa's farmland shouldn't be a threat, he says. It's a good thing. The deals just have to be fair for local people.

I heard much the same thing in the village of Ruasse. Small farmers told me that they felt that there was enough land for everyone — as long as there was equipment available to clear it. They had no objection to big investor-owned farms, if those investors keep their promises.

In fact, they said, there's another big investor-owned farm just 10 miles away, and that one's fine. That one's been a good neighbor, the farmers say. Stay tuned for that story on Friday.