Accessibility links
Movie Review - 'Your Sister's Sister' - Of Best Friends, Siblings And Too Much Tequila Lynn Shelton returns with Your Sister's Sister, an improvised comedy about the complications that arise from alcohol-fueled sex, starring Mark Duplass, Emily Blunt and Rosemarie DeWitt. Critic Bob Mondello says the film seduces through its spontaneous wit and understated charm. 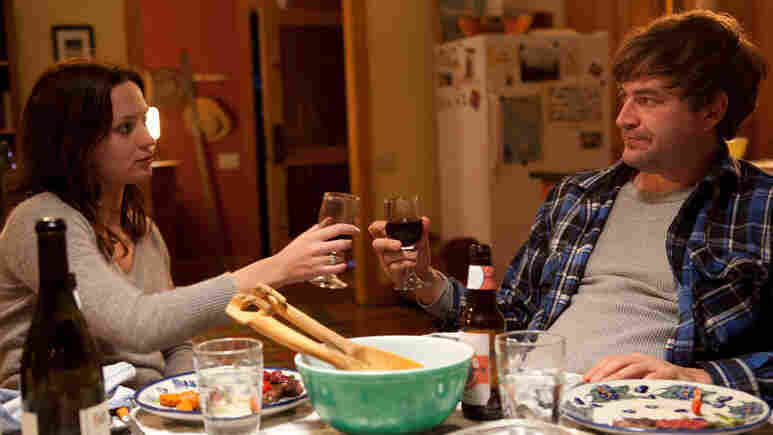 When Jack (Mark Duplass) continues to act out a year after his brother's death, his best friend, Iris (Emily Blunt), who's also his late brother's ex-girlfriend, invites him to rest and recharge at her family's cabin. IFC Films hide caption

From 'Your Sister's Sister' - 'Double Whammy'

From 'Your Sister's Sister' - 'Skinny Jeans'

As played by Mark Duplass, Jack is a sweet guy, though that's not really something you'd guess from his lashing out at the friends who are trying to celebrate his brother's life at the memorial service that starts Your Sister's Sister.

It's been a year since his brother's death, but Jack is still in such a deep funk that his best friend, Iris (Emily Blunt), who is also his brother's ex-girlfriend, decides it's time for an intervention. Kindly, and with the sort of patience that he's not showing himself, she sends him off to her family's secluded island cabin to sit and think.

"There's no TV, there's no internet, it's just you," she tells him.

"Do they have forks?" he wonders. "Because I may need to stab myself in the face."

Still, off he goes, arriving well after dark at the cabin only to discover that it's occupied. Iris' sister Hannah (Rosemarie DeWitt) is there, feeling blue after breaking up with her girlfriend of seven years. Awkward chit-chat ensues, then an agreement to share the house for the evening, and then she breaks out the tequila.

Quite a few shots later, Jack has gone much further than he meant to in reassuring Hannah that she's still attractive and desirable. They end up having drunken sex — hilariously, for all of about 10 seconds — and that potentially awkward situation becomes infinitely more fraught when they awaken bleary-eyed the next morning to the sound of Iris arriving unexpectedly.

Jack's reaction — after he's begged Hannah not to let Iris know they've slept together — is something on the order of "Wha', how, whi', why're you, wha', how'd the, what're you doin' here?" 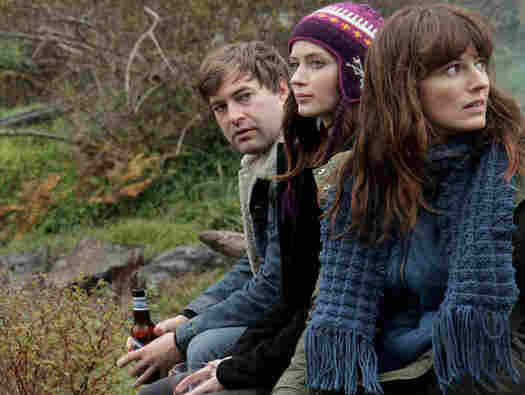 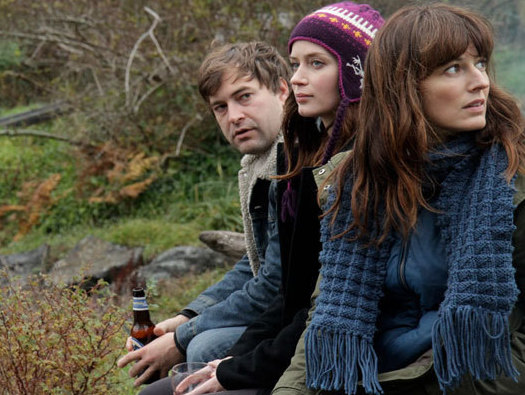 Jack with Iris and her sister, Hannah (Rosemarie DeWitt). Jack and Hannah's tequila-soaked one-night stand is the catalyst for the film's comedic twists.

As you may gather from that collection of syllables, the conversation in Your Sister's Sister has a loose, improvisatory feel, partly because much of the dialogue was improvised. Writer-director Lynn Shelton likes to work that way — as she did in her previous comedy, Hump Day, which also starred Duplass in a situation where sex got complicated.

This film, shot in just 12 days, goes so far as to credit her three stars as creative consultants, and their heightened involvement in what they're saying pays clear dividends. You can feel the immediacy deepening as secrets are revealed, relationships recalibrated, and Jack goes into panic mode in a Puget Sound woodland that serves as a lush background for sparring between both siblings and friends.

Duplass is doing his conflicted mumblecore thing quite elegantly these days, and he's joined here by Blunt's fragile Iris and DeWitt's alternately guarded and abrasive Hannah. Also by perhaps one too many unlikely betrayals in the final reel — but by that time, audiences will likely have been so seduced by the film's spontaneous wit and understated charm that only the really churlish will object.