Accessibility links
The Euro Question Divides Greeks Ahead Of Election As Greeks prepare to cast ballots in a rerun of last month's inconclusive parliamentary elections, they remain split over two political parties: one that supports a large European bailout deal and the accompanying austerity measures and one that wants to ditch the deal. 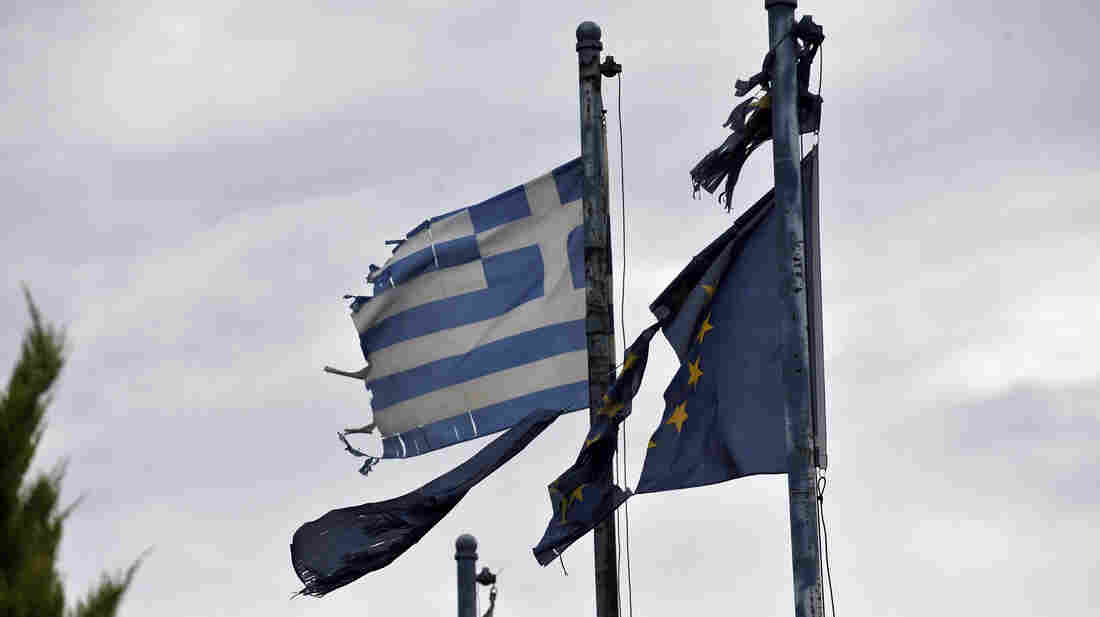 Torn Greek (left) and European Union flags fly at the entrance of an abandoned factory in the industrial zone of Komotini about 500 miles from Athens. Sunday's parliamentary election will go a long way toward determining whether Greece stays in the EU. Petros Giannakouris/AP hide caption 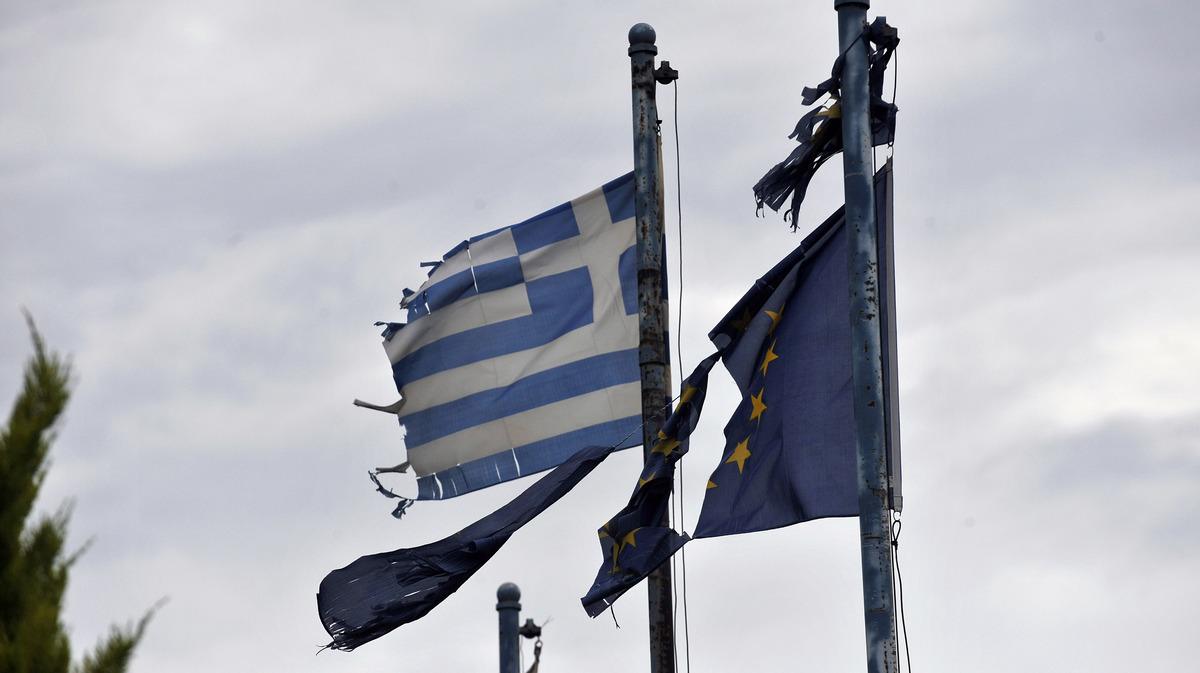 Torn Greek (left) and European Union flags fly at the entrance of an abandoned factory in the industrial zone of Komotini about 500 miles from Athens. Sunday's parliamentary election will go a long way toward determining whether Greece stays in the EU.

Greeks are headed back to the polls Sunday after last month's inconclusive parliamentary election left the country without a governing coalition. And like the last time, people are polarized over harsh austerity measures imposed on Greece as part of a large European economic bailout.

The split is between those who support the conservative New Democracy party, which backs the bailout deal, and those who favor the leftist Syriza party, which has vowed to scrap it. Both parties are running neck and neck, despite vocal warnings from many EU leaders that a bailout rejection will lead to a deeper crisis and Greece's exit from the eurozone.

"Fear is the ruling factor in these elections," political consultant Vassilios Dascalopoulos says. "Fear of uncertainty, insecurity – it's the most constant parameter."

As China's Economy Cools, World May Feel A Chill

New Democracy has been running a TV ad raising the specter of a Greek eurozone exit. In it, a teacher reads from a list of eurozone members: Cyprus, Belgium, Ireland, Portugal, Spain. A little girl asks, "And Greece, sir? Why not Greece?"

Then, a deep baritone weighs in: "We don't play with our kids' future."

Despite fears of Greece's banishment from the eurozone should Syriza win, the party has won over a large portion of the depleted middle class in this austerity-weary country.

Its slogan is simple but optimistic: "We leave the bailout behind and open the path to hope."

On one sweltering afternoon, people gathered for a Syriza town hall-style meeting in Thrakomakedones, a residential area and longtime New Democracy stronghold. The residents want to know what a Syriza government would do for them — retirees who have seen their pensions slashed, businessmen gone bankrupt, young people with no job prospects.

A psychotherapist named Terapia Masaraki says many Greeks will switch to Syriza because it promises to restore what they lost. "Many people are not so depressed. They have hope because they want to change. No longer passive. No, it's over in Greece. Over. We want to change."

A few months ago, Syriza was a marginal, far-left party. But it saw a swell of support in the May elections. It finished second to New Democracy, which like the other long-governing Socialist party, suffered huge losses due to its support for tough German-dictated austerity measures known as the memorandum.

With Greece's 40-year-old political establishment imploding, Syriza has projected a solid image, says Dascalopoulos, the political consultant. "They have been persistent to their message of anti-memorandum agenda, and they have been able to create an umbrella for all protest in Greece from far right to far left," he says.

But reviving the country's economy is a daunting task: five years of recession, salaries slashed up to 50 percent, unemployment at record highs, health care cut to the bone.

George Stathakis, a Syriza member of Parliament and economist, outlines his party's plan to reverse the downward spiral. "There will be a major redistribution of income from the wealthy to the poorer strata of society, protect the welfare state and try to improve its performance. We will freeze wages and salaries at the current level."

Given the fissures in Greek society as the country sinks deeper into the debt crisis, no single party is expected to win an outright majority in Sunday's election.