Accessibility links
Greek Leftist Leader Up For 'Worst Job' In Europe Alexis Tsipras, the leader of Syriza party, was an obscure politician whose squabbling leftist coalition was best known for encouraging sit-ins and anti-austerity demonstrations. But after coming in second place in the May Greek elections, pollsters say his party could win Sunday's revote. 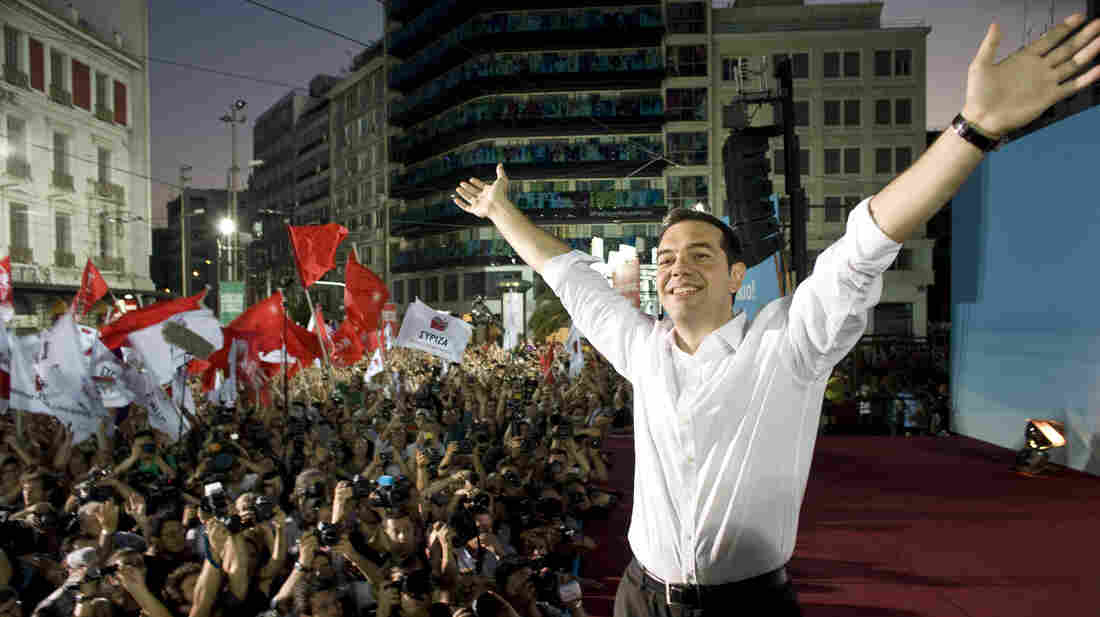 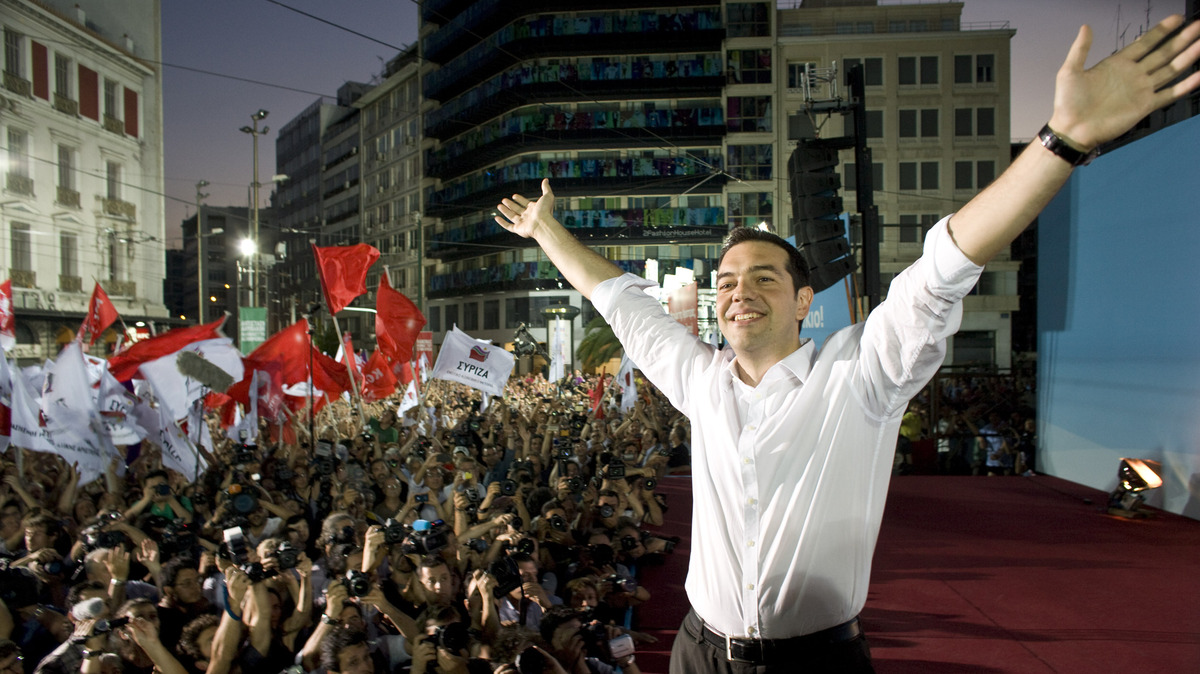 Syriza Party leader Alexis Tsipras greets supporters at a party rally in Athens. The leftist party came second in the elections last month and could win a revote on Sunday.

A few short weeks ago, the Greek politician Alexis Tsipras was a young rebel leading Syriza, a fractious leftist coalition best known for anti-austerity protests. Now, his party could come in first in Sunday's election.

The party's possible win alarmed the German edition of the Financial Times as it posted an online appeal in Greek calling on voters to resist his demagoguery.

But Tsipras, a civil engineer who has been involved in leftist politics since his teens, says his program to roll back austerity will save the euro from its ballooning debt crisis.

"How can austerity continue and the eurozone still enjoy stability?" he asks. "The borrowing rate for Spain [has] reached 7 percent. This is no coincidence. The medicine for treating this illness is wrong, and it has to change."

Syriza's headquarters are in an old building near a rundown square in central Athens. There's no air conditioning, and on a hot day, young supporters in sundresses and khakis work the phones and sort through campaign fliers.

Tsipras' small office is on the seventh floor. The room is decorated with a framed print of Picasso's anti-war painting, Guernica, and a bookshelf with tomes on political philosophy and soccer.

Thrust Into The Spotlight

Tsipras, 37, wearing a purple polo shirt and jeans, looks much younger than his age. He's visibly exhausted. Since his party rose from obscurity on May 6 to run neck and neck with the conservative, and much more established, New Democracy party, he keeps occupied with campaign rallies, policy papers and dozens of interviews.

"Our main hope for election night is that our European partners will have a measured response to the choice of Greek voters," he says. "I don't think anyone will doubt the right of the Greek people to elect the government it chooses."

No party is expected to win an outright majority on Sunday, but Tsipras and his main rival, Antonis Samaras of the conservative New Democracy party, say it's crucial that some kind of coalition government is formed. Tsipras says he's able to form that coalition. 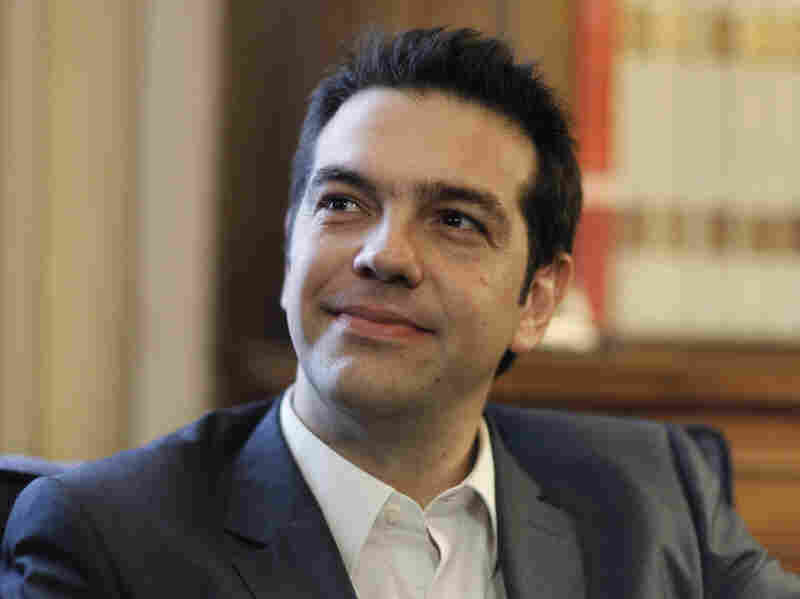 Tsipras and his Syriza party are running neck and neck with the conservative New Democracy party and its leader, Antonis Samaras. Kostas Tsironis/AP hide caption 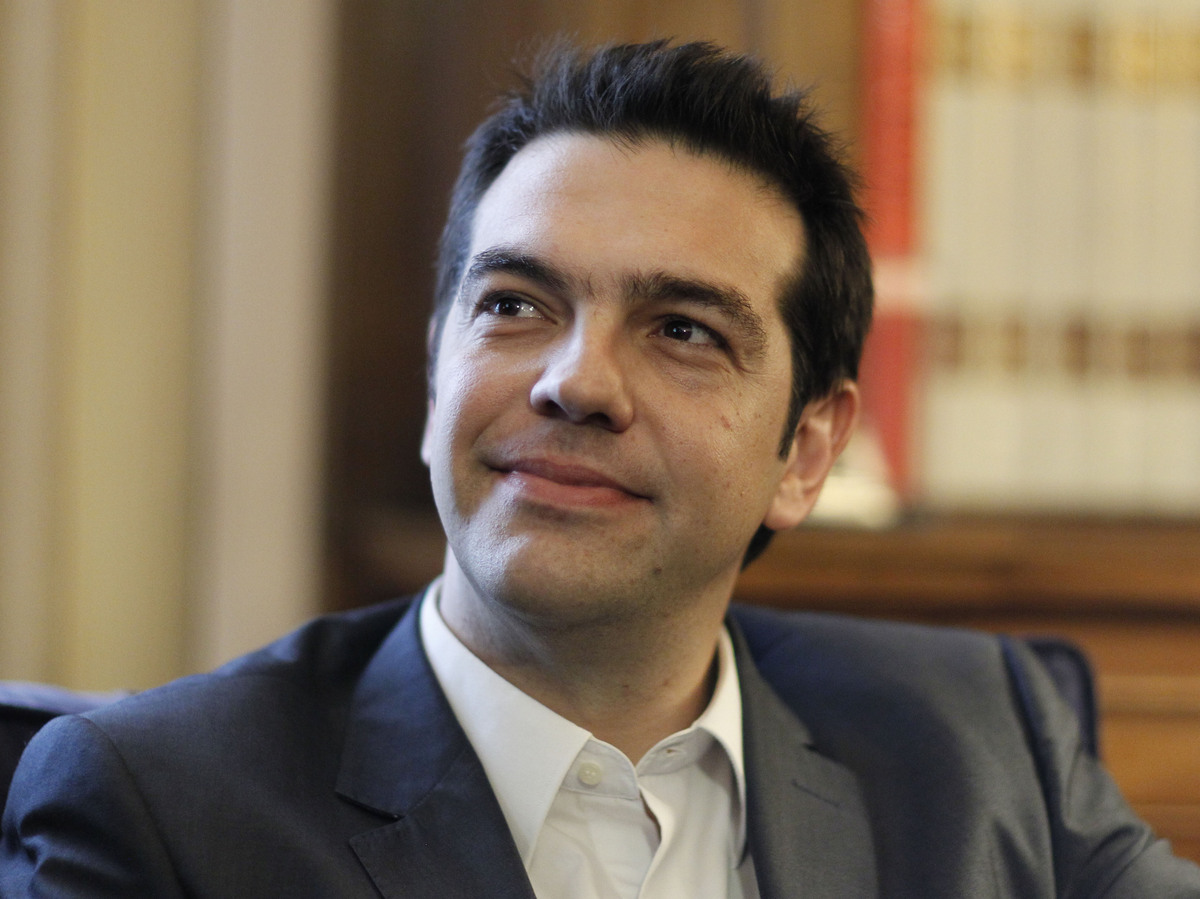 Tsipras and his Syriza party are running neck and neck with the conservative New Democracy party and its leader, Antonis Samaras.

Tsipras' plans to restore Greece's economic health involve taking away its current life support. He wants to cancel the terms of the billions in bailout loans that are keeping Greece solvent.

He adds that the wage, pension and job cuts have slowed down the economy to the point where it's impossible for the country to pay off its loans.

And he says Greece doesn't need to reduce its public sector but just make it much more efficient.

"We have to put an end to the pattern of seeing shortages in hospitals but having people in parliamentary and ministerial offices who earn money for doing nothing," he says.

He says he will roll back wage cuts and taxes on the poor by cracking down on tax evasion and raising taxes on the rich. But the possibility of higher taxes may discourage future investment.

"For private investment to come to Greece, there needs to be a climate of stability," he says. "The problem isn't how high taxes are, but whether taxes are consistent and don't change every five days. It has to do with transparency and if there is oversight of exchanges and no money passed under the table."

Doubts About His Plans

His promise to cancel the austerity measures mandated by the bailout resonates deeply here in Greece, where unemployment is now at 22.6 percent.

Tsipras told supporters in Iraklion, Crete, that his party offered hope. An unemployed doctor named Maria Kourousi is willing to take a gamble on his offer. She says she is immune to the dire warnings about economic collapse if Tsipras is elected and cancels the terms of the bailout.

"OK, I have two degrees," Kourousi says. "I have no job. I will probably start working if I'm lucky in two or three years time. I'm 32 years old and my parents actually give me pocket money so I can survive. So I have nothing to lose, certainly."

But Greece could lose if Tsipras miscalculates, says Gikas Hardouvelis, who served as the top economic adviser to the former technocrat prime minister, Lucas Papademos.

"The idea of erasing everything is completely unrealistic because let's not forget our European partners are also our lenders," he said. "We cannot claim we will renegotiate without having a counterparty on the other side. There is always a counterparty."

If the international lenders stop loans because Greece reneges on the current terms, the country could run out of cash as early as next month. That leaves whoever becomes prime minister after Sunday with what may be the worst job in Europe.

"Nobody can choose when to make a date with history," Tsipras says, laughing a little at his own unlikely place in it. "Maybe this is our last chance, our last chance to put the brakes on our country's downward spiral."