Accessibility links
Raising Dad: Books For A New Kind Of Fatherhood A few decades ago, most fathers would never have thought to read a parenting book, but these days, more and more are writing their own. From the dad-as-coach approach to the hip-dad variation, this year's releases point to a generational divide in what it means to be a father.

Raising Dad: Books For A New Kind Of Fatherhood

Raising Dad: Books For A New Kind Of Fatherhood 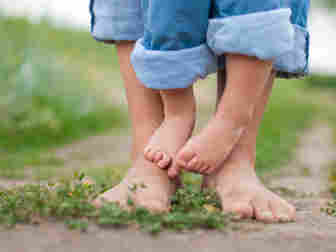 My father, like many who raised kids in the 1960s and '70s, would never have thought to reach for a book on parenting. No matter how engaged he was in our lives, he always deferred to "the expert" — our mom. These days, however, it seems more and more fathers are writing books about fatherhood, and this year the sheer number of them suggests a generational watershed.

The voices in these volumes are all over the map, as if men aren't quite comfortable yet in this genre. It seems to me, though, that these books can be broken down into four categories: the dad as coach; the hip and witty dad; the dad as participatory journalist; and the heavy hitters.

Parenting as sports manual is perhaps the most accessible mode for many American dads. These guides help fathers tap into their inner caregiver. In All Pro Dad: Seven Essentials To Be A Hero To Your Kids, Mark Merrill, a motivational speaker, divides his book into such chapter headings as "Know Your Makeup — Who Am I?" and "Know Your Message — What Do I Need To Share With Others?" Merrill, who heads an organization called Family First, dedicated to "strengthen[ing] the family," asserts: "We are all born with the ability to love, but we must expand our capacity to love ... which will determine our capacity to lead at home."

A similar book is Fatherhood: Rising To The Ultimate Challenge, in which Etan Thomas, who played for the NBA's Atlanta Hawks and supports President Obama's Fatherhood Initiative, culls words of wisdom from actors Isaiah Washington and Taye Diggs; basketball stars Kareem Abdul-Jabbar and Yao Ming; and politician Howard Dean, among others.

Then there are those writers who simply experience the humor in parenting. In Dan Gets A Minivan: Life At The Intersection Of Dude And Dad, Dan Zevin continually fights becoming uncool. Yet he gets married, moves to the suburbs, becomes a dad and finds himself driving the most un-hip of all cars — the minivan. "As you may have figured by now, I am not one of your can-do, role-model type of individuals who motivates future generations to carry the torch of my legacy," he writes.

But Zevin seems to be a good antidote to the quintessential "Aloof Hipster Dad," with whom he holds an imaginary conversation (and who he perhaps once was). "The last thing I want to do is turn you into one of those Creepy Helicopter Dads at the playground," Zevin writes. But he advises this hipster dad, who's ignoring his young son, to take off his padded headphones and his "ironically oversized" sunglasses, "Because, dude, you're missing it."

Dan Bucatinsky, an actor who writes for the Huffington Post, tells of becoming a father with his partner Don Roos (screenwriter of Marley & Me and Single White Female) in Does This Baby Make Me Look Straight?: Confessions Of A Gay Dad. Bucatinsky touches on the challenges of adopting a boy and a girl, and the often humorous trials of raising kids with two dads. He talks about explaining to the Hispanic nannies in the park that he's gay, and, in a chapter titled "The F Word," being mortified when his daughter, a kindergartner, refers to someone as ... "fat."

Other men have accepted their roles as fathers but find that something about their situation detracts from, or calls into question, their manhood. These dads-as-participatory-journalists enter a kind of journey as they immerse themselves entirely and intentionally into their fatherhood.

In Man Made: A Stupid Quest For Masculinity, Joel Stein explains how, upon the birth of his son, he felt he finally needed to participate in some sort of manly activity. Stein lives in Los Angeles and drives a Mini Cooper. He recalls one day when a group of teenagers in a Mustang passed him on the highway and hurled a homosexual epithet. "My car got gay-bashed," Stein writes. This instance inspires him to learn to drive a real-man's car — a Lamborghini. In the course of manning up, Stein also apprentices at a fire station, endures three days of Marine Corps boot camp and jumps into the ring with mixed martial artist Randy Couture.

'No one you love dies once,' Weber writes. 'You are condemned to relive their death, and try to prevent it, and to fail, every time.'

Meanwhile, Daniel Duane, who lives farther up the coast in San Francisco, addresses the difficulty of being part of a two-income family in which both parents divide the child-rearing responsibilities. "Like a lot of guys in my predicament," Duane writes, he chose dinner as his sphere of participation.

Duane is a rock climber and surfer (about which he wrote beautifully in Caught Inside). He struggles with his identity as house dad, so he decides to apply the same intensity to braising duck legs in zinfandel as he does to searching for the perfect wave, and so begins his journey. In How To Cook Like A Man: A Memoir Of Cookbook Obsession, he brings machismo to seemingly unmanly endeavors — shopping at farmers' markets and working his way through every cookbook written by famed San Fran cook and restaurateur Alice Waters.

Finally, we have the heavy hitters. By that, I mean men who don't have time to write a guide for other dads, prove they are hipsters or immerse themselves in the "experience" of being a father. These books are unapologetically about the sheer joy and pain fatherhood can bring. They are written when something goes terribly wrong. This is the heavy stuff — stuff that men of generations before ours would not have felt comfortable discussing in a public forum.

In Immortal Bird: A Family Memoir, Doron Weber, vice president of the Alfred P. Sloan Foundation's program for the Public Understanding of Science and Technology, celebrates the memory of his son, who was born with a malformed heart and who eventually died at age 16 from complications of a heart transplant. "No one you love dies once," Weber writes. "You are condemned to relive their death, and try to prevent it, and to fail, every time."

Buzz Bissinger, author of Friday Night Lights, turns his attention to his twin sons, Gerry and Zack, who were born prematurely. Today, Gerry leads a normal life, while Zach, who suffered brain damage due to lack of oxygen at birth, is a savant with a great gift of memory. In Father's Day: A Journey Into The Mind And Heart Of My Extraordinary Son, Bissinger remembers those first days in the hospital. He conveys his feelings coldly but honestly: "They knew the odds of his survival were very low," he writes. "I also knew that if he survived, he would not remotely be the son I imagined. Which is a nicer way of saying he would not remotely be the son I wanted."

With Zach now in his early 20s, Bissinger gets the notion to take him on a father-son car trip, which he admits is a selfish idea, "a classic example of a father forcing his imprint on his son and creating an experience that only becomes more memorable because both parties spend a lifetime unsuccessfully trying to forget it."

At times, the intensity and honesty of fathers writing about their experiences seems too raw. After all, we accept women writing about such situations. But perhaps fatherhood in our culture has reached its own rite of passage, no longer sitting alone at the head of the table, but at home in the kitchen, in the playground and, now, on the nightstand.

Mark Rotella is the author of Amore: The Story of Italian American Song and Stolen Figs: And Other Adventures in Calabria. He lives in Montclair, N.J., with his wife and two children.