Accessibility links
Novelist John Irving Plays Not My Job We invite the author of The World According to Garp to answer three questions about the classic trail mix known as gorp. Irving has just published a new novel called In One Person. 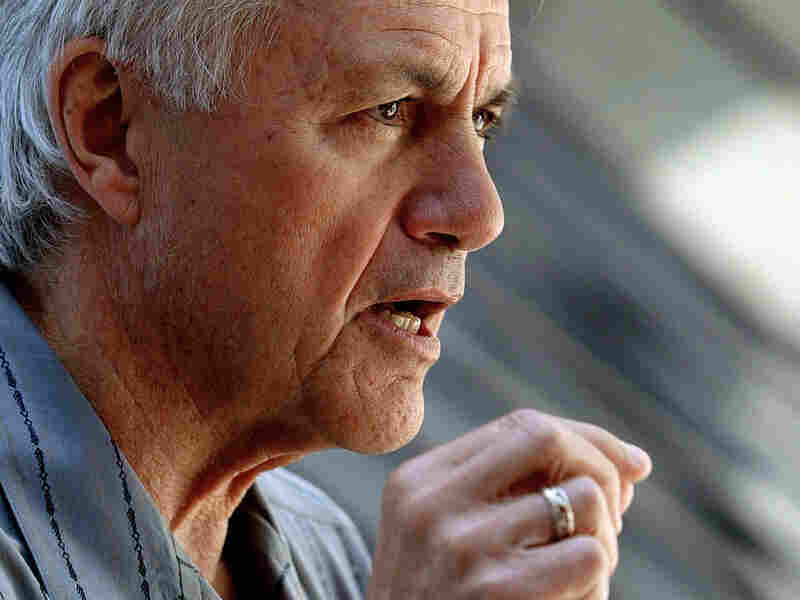 John Irving is the author of The World According To Garp, A Prayer for Owen Meany, The Cider House Rules and many other works of fiction. His latest novel is called In One Person.

We've invited Irving to play a game called "The World According to Gorp." Garp is about sex, castration and bears. Gorp, on the other hand, is the mix of "good old raisins and peanuts" you eat when you're hiking.

And now the game where somebody who's done impressive things does something else entirely. Author John Irving is the author of the classic novels "The World According To Garp," "A Prayer for Owen Meany," and "The Cider House Rules," among many others. His latest novel is called, "In One Person," and he joins us now. John Irving, welcome to WAIT WAIT...DON'T TELL ME!

JOHN IRVING: Thank you. I have a very poor record at multiple choice questions.

SAGAL: My understanding is that you went to a prestigious school, Phillips Exeter Academy.

IRVING: I did. And I was told by the college counselor that I had the lowest SAT scores in a 12-year history of the school.

SAGAL: Have you been trying to show him off ever since?

IRVING: No. I was, at the time, humiliated but I had a private celebration when I heard he died.

IRVING: Yeah, I only invited a few friends.

SAGAL: Really? Just over, hang out. We found a chart on your Wikipedia page. I don't know if you've ever looked at it.

SAGAL: On the Wikipedia page, somebody has developed a chart of all of your novels and lists of themes and checkmarks for the theme.

IRVING: Oh yeah, somebody sent that to me, actually. I didn't know where it came from.

SAGAL: The themes are, and these are the ones: New England, sex workers, wrestling, Vienna, bears, deadly accidents and absent parents are on the list. Are there any others that are missing? We kind of imagine you there with a checklist, checking them off yourself as you went through it.

IRVING: Well, you know, that's a fair list of what I would call superficial details.

IRVING: I would say death of people you love and don't ever want to lose is probably more primary on that list.

SAGAL: Sure. Do you ever surprise yourself when you sit down to write a novel and the next thing you know another bear pops up?

IRVING: No, I don't surprise myself, because I begin with the ending of books and I know where I'm going. Which I know makes it sound terribly manipulative.

IRVING: Which it is.

SAGAL: It's interesting to me. We've read that, that you always know the last line of your novel before you start writing it.

IRVING: I didn't always know it was the last line. That is, the first four or five books, I imagined that I'd actually been forward enough to have written a first line, only to discover over time that it was, again, the last line. So it didn't become recognizable as a process until my sixth novel "The Cider House Rules," at which point I just realized well I get endings first. And I should recognize that.

SAGAL: Right. I mean you've written so many novels about these themes that have come up again. Have you learned anything about yourself in all these years that you didn't know when you started?

IRVING: If I have any advantage, maybe, as a writer, it is that I don't think I'm very interesting. I mean, beginning a novel with the last sentence is a pretty plodding way to spend your life. I do know where I'm going and it's just a matter of finding the language to get there. I don't mean to make this sound so joyless.

SAGAL: Let me ask you, we understand that you write the same way. You don't use a computer. You write either longhand or on a manual typewriter. Is that correct?

IRVING: I got rid of the manual typewriters. They were too fast.

IRVING: I've always preferred writing in longhand. I've always written first drafts in longhand. It became so cumbersome just to try to keep enough moving parts to repair the typewriters, which had not been manufactured for 20 or 30 or 40 years that I was beginning to feel I was living in a machine shop. And I was repairing the typewriters all the time instead of writing. So I got rid of them.

IRVING: It's true. There's not much that can go wrong with a pen. You just use another one.

AMY DICKINSON: Can I ask a question? So, if I remember right, you've always been a wrestler. Is that right?

IRVING: Well, I'm 70 now. I don't wrestle with anyone now but the dog.

DICKINSON: Oh, you don't do it anymore? Because...

SAGAL: I know some 80-year-olds you can take, probably.

DICKINSON: I remember reading that you continued to work out with like the high school team. But those days are done?

IRVING: Well, I did that into my sixties, but then I started getting hurt in various humiliating ways.

SAGAL: You're sort of living out your characters' life, I should say. That happens a lot in your books.

IRVING: Well yeah, it was time to stop. When you have repeated orthopedic procedures on your little finger...

IRVING: ...it doesn't really amount to much except degradation.

SAGAL: Well, John Irving, we have asked you here to play a game we're calling?

CARL KASELL: The World According to Gorp.

SAGAL: Your novel, "The World According to Garp" is about sex, castration, bears. Gorp, on the other hand, is about raisins and nuts that you eat when you're hiking. We're going to ask you three questions about Gorp. Get at least two right and you'll win our prize for one of our listeners. Carl, who is author John Irving playing for?

SAGAL: So we all know what we're talking about, Gorp, right, you know the stuff, the trail mix? Ready to play?

SAGAL: I can sense your excitement. Here we go. Despite what you might have heard, Gorp is not named for the acronym "Good Old Raisins and Peanuts." Its name, say linguists, most likely comes from what?

IRVING: You're serious aren't you?

SAGAL: Serious as the tomb, sir.

IRVING: I guess I'd go with A.

SAGAL: You're going to go with the Old English word meaning to gobble or eat greedily?

IRVING: Well it just is probably wrong, but that's my history with multiple choice.

IRVING: I wouldn't want to refute it. So even if I'm wrong, well, I used to feel this way when I did the SAT test, that I should have been right.

SAGAL: I hope this is a redemptive experience for you. You're correct. You are right.

SAGAL: They think it might be from the same Old English root as the word "gawp," you know, to like hang out with your mouth open.

SAGAL: Yeah, so that's right. All right, next question. It is called Gorp in America.

IRVING: You mean there's more than one question?

SAGAL: Don't put your pencil down yet, sir. It's called Gorp in America, but in New Zealand that trail mixture is sometime called what? A: Gravel-yums? B: Schmogle? Or C: Winnawinnamuckluck?

SAGAL: You could Google it. Oh, I'm sorry. You just have a pad of paper.

IRVING: Yeah, but I know how to do the Google thing.

IRVING: Yeah, but there isn't time and I could not spell the answer which is C, and I choose C.

SAGAL: I wish. They called is Schmogle.

SAGAL: Sometimes they call it Scroggin as well. All right, this is exciting though. You have one right with one to go. If you get this correct, you win.

Gorp isn't just a snack; it was also a 1980 film "Gorp." The film was about what? A: A mountain dwelling madman who makes trail-mix out of dried people? B: A mischievous camp counselor with a mad crush on a sexy waitress played by Fran Drescher? Or C: A 13-year-old girl who adopts an alien and calls it her Galactic Origin Rascally Person?

IRVING: I'm trying to think which of these movies I would detest least.

IRVING: I think I'll go with the first one.

SAGAL: You're going to go with the mountain dwelling madman who makes trail mix out of dried people?

IRVING: Yeah, better than the Fran as a waitress person.

SAGAL: You don't buy Fran as a waitress?

IRVING: Well, you want me to guess again?

SAGAL: I now understand why your novels are so long. You take your time to work your way through stuff.

SAGAL: Everything happens in its own time. I admire that.

DICKINSON: Who played the camp counselor in that?

DICKINSON: Trying to trick him. It was a trick.

IRVING: Well, I guess I would be foolish to not say that it sounds like B.

SAGAL: You would be correct.

DICKINSON: But the whole you're not so good at multiple choice thing is really coming into focus now.

IRVING: It goes with writing by hand.

SAGAL: It really does.

IRVING: You know the part where you have to fill in the part with the pencil completely?

SAGAL: I can understand.

IRVING: If you do it properly, I mean you have to really do it. I mean...

SAGAL: Carl, how did John Irving do on our quiz?

KASELL: John had two correct answers, Peter. So he wins for Jamie Mitchell and Jessica Roy.

SAGAL: Do you feel any better about your multiple choice?

IRVING: Does anyone lose on this show?

SAGAL: Not if I have enjoyed their books as much as I've enjoyed yours.

SAGAL: John Irving's newest novel is "In One Person." It's in the bookstores now. John Irving, thank you so much for being with us. It's a pleasure to talk to you.