Accessibility links
State Of The Unions: Labor And The Middle Class For many full-time employees in the United States, the five-day work week, paid overtime and holidays are expected benefits. This wasn't always so, and many workers' benefits today are the achievements of past labor union efforts. But unions in many states are now on the defense, and if they go, where does that leave the middle class? 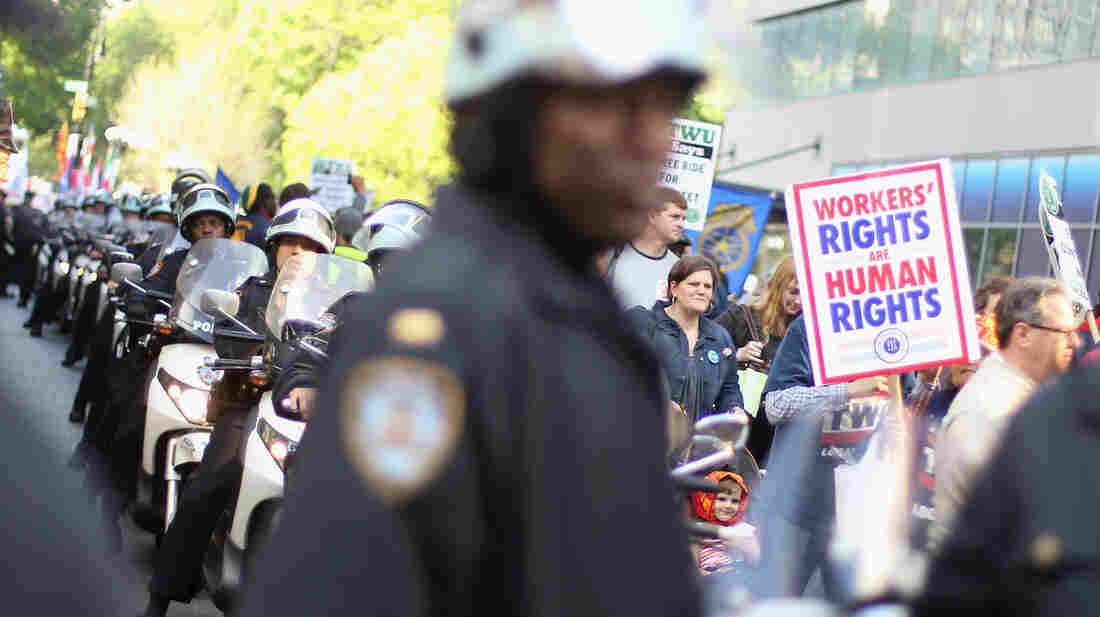 Occupy Wall Street protesters joined with unions in New York on May 1, a traditional day of global protests in sympathy with unions and leftist politics. Mario Tama/Getty Images hide caption 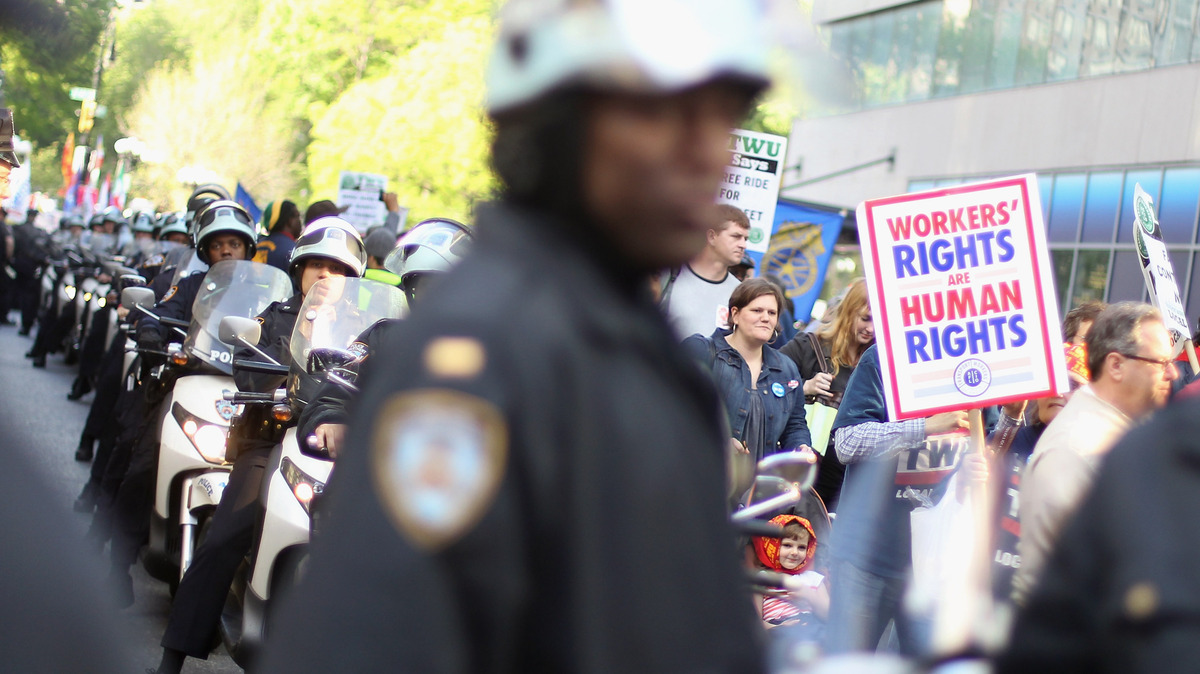 Occupy Wall Street protesters joined with unions in New York on May 1, a traditional day of global protests in sympathy with unions and leftist politics.

For many full-time employees in the United States, the five-day work week, paid overtime and holidays are expected benefits. This wasn't always so, and many workers' benefits today are the achievements of labor unions.

Just five decades ago, unions were on the frontline of the fight for the rights and wages of the middle class. But today, unions are on the decline.

After World War II, organized labor represented a third of America's workforce. Today, only 12 percent of the overall workforce belongs to labor unions both public and private. About 37 percent of the public sector workforce belong to unions as opposed to only 7 percent in the private sector, but they're now in the cross hairs of cash-strapped states and cities.

Voters in Ohio later repealed a law that would limit collective bargaining for some public-sector unions, but unions in many states are still at odds with government. So if unions decline, where does that leave the middle class?

The Power Of Unions

Marcus Oladell, a 62-year-old from East Hartford, Conn., has been a bus driver in the area for about 15 years. Just 12 years ago, he helped form a union of school bus drivers with the Teamsters.

Since unionizing, he tells weekends on All Things Considered guest host Jacki Lyden, starting wages for drivers have doubled to $16 an hour. Before unionizing, senior drivers were given raises of a just a nickel an hour.

"If they ever tried to give us a nickel raise now, we'd be walking," Oladell says. "So we had no holidays, now we're up to eight a year. In our last contract, which we never had before, there was a longevity bonus given to members there for 10, 15 and 20 years."

While the workers are not getting rich, Oladell says, no one could argue the unions have raised the standards compared to what they had just 12 years ago.

Oladell became shop steward of his local for the Teamsters. He now travels across the country helping organize bus yards like his.

"The generation behind us has to get an understanding of how powerful a union can be," he says. "If that middle class is going to be strong, it has to be represented by unions.

Unions And The Middle Class

Middle class wages, at least for the majority of people, are the invention of American unions, says Harold Meyerson, a political columnist for The Washington Post and an editor-at-large at The American Prospect. He says if big labor dies, then America's middle class dies with it.

In a recent column, Meyerson points to the decades after World War II, a time of shared prosperity, when productivity and median household income both increased by over 100 percent. It was also a time of peak unionization.

"This had an effect on non-union workers as well," Meyerson tells Lyden. "Non-union workers in industries that were heavily unionized, ... their employers had to compete with union employers. This raised wages for everyone."

As unions have declined, Meyerson says, the average wage in some sectors has fallen — in some cases dramatically. In the auto industry, unionized jobs once paid upward of $28 an hour. He says workers in both union and non-union plants are now hired at about $13 to $15 an hour, and in some cases can't earn more than $19 an hour.

Without a middle class helped by unions, Meyerson says, the U.S. would continue down a path of massive inequality of wealth and low levels of mobility.

"People are not moving up the economic ladder now," he says. "We would have real decline in wealth because people's income isn't keeping up, so most of their wealth is in their homes ... [and] people have lost two decades worth of value on their homes. We would have a really strapped middle class."

This, in fact, is what we have now, he says.

Public-sector unions have grown as cities and the demand for services has expanded. That's where the crisis comes in, especially as the economy has fallen.

On the same day as the tumultuous recall vote in Wisconsin, two California cities — San Diego and San Jose — were voting on measures to force city workers to pay more for their pensions. In San Jose, Democratic Mayor Chuck Reed took on the unions.

Reed pushed for a new law requiring workers to pay more for their pensions. He estimates that in the first year the measure would save the city about $25 million a year, but it would eventually save billions in the long run. It passed resoundingly, but the unions say in a lawsuit that the measure is anti-union.

As a member of the traditionally pro-labor Democratic Party, Reed had to weigh the political consequences of his decision.

"I think this is a choice that is very difficult for Democrats to make," he tells Lyden. "But it is a choice between providing services to the people or providing benefits to our employees.

It's a choice Reed says all Democrats will be faced with as they deal with rising pension costs across the country.

The way forward is difficult for cities and unions. Central Falls, R.I., a city in bankruptcy, got the state to help pay pensions owed to police and fire retirees. They faced losing as much as 55 percent of their benefits.

Meyerson says it might be hard for people to have sympathy for union workers, even in public-sector jobs.

"It's a real problem since most private-sector workers have lost pensions of yore and have 401(k)s or nothing," he says, "and they're asked to support others."

One thing that is certain is that both public-sector and private unions will continue to be a topic for politicians during the next five months as we head toward a tumultuous Election Day.