Accessibility links
Want A Winner? These Books Made The Critics' Cut Lynn Neary talks to three critics about books you shouldn't miss. One critic says it's a particularly rich literary summer because in election years, publishers release the juiciest books before fall. 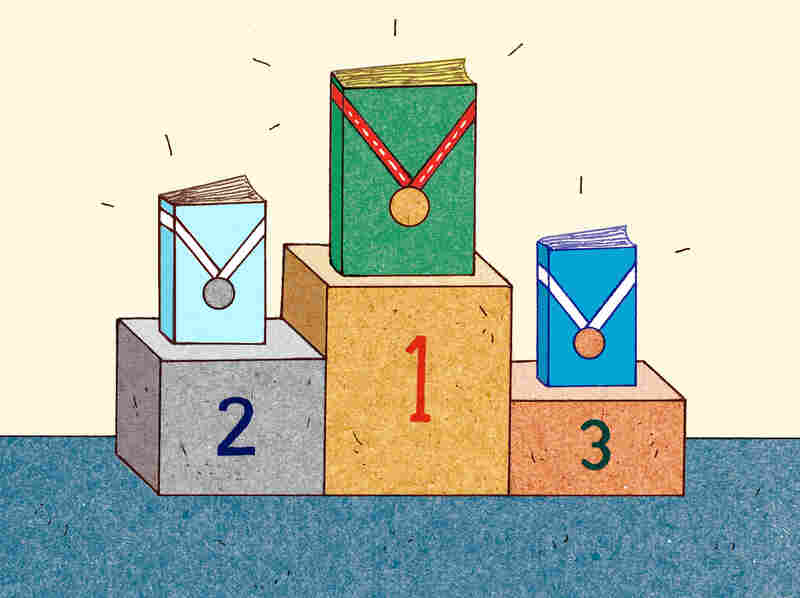 It's an election year, and that may be good news for those of us who like our summer reading: Laura Miller of Salon.com says a lot of publishing companies don't want to release all their best books in the fall because they'll have to compete with all that presidential campaign news. And that means more great books to choose from when the weather is hot.

Miller has picked out a couple of juicy crime novels and some "narrative nonfiction" for her lazy, hazy summer days. David Ulin of the L.A. Times likes to read "outside the box" in the summertime, so he has an eclectic list, from "graphic nonfiction" to the letters of a well-known writer whose work has haunted us since the middle of last century. And Ron Charles of The Washington Post is delving into a couple of literary novels — one from a major American writer. He says both offer great writing, a good story and a lot to think about. So sit back, relax and dig into this potpourri of pleasure from our critics.

Miller has this advice for anyone who has not yet read EVERY Tana French novel: "Just go out and get them right now." Like all her books, French's fourth novel, Broken Harbor, is set in the fictitious Dublin murder squad and as always, a minor character from her last book has moved into the forefront to become the main character in this one. This novel features detective Mick "Scorcher" Kennedy, who Miller calls a "problematic character." He's trying to solve an attack that left two children and their father dead, and the mother in intensive care. The family lived in one of the many housing developments that sprouted all over Ireland during its brief brush with prosperity, and which have fallen into decline in the wake of the Celtic Tiger's collapse. At first Kennedy thinks the case is an easy solve but hey, this is a murder mystery. Neither the crime nor Kennedy's personal life turn out to be so simple.

The second crime novel on Miller's list is Gone Girl by Gillian Flynn. Miller describes it as a "sharp, observant, current story with really well-developed characters." It's also a page-turner that could have been ripped from the headlines. Nick Dunne gets caught like a deer in the headlights by the media and the police when his wife, Amy, goes missing on their fifth anniversary. From inappropriate smiling to inadvertant flirting, he does pretty much everything you shouldn't do when the national media is camped on your doorstep. The whole country is convinced Nick murdered his beautiful young wife, who happens to have left a damning diary behind. But this is as much a story of a marriage gone wrong as it is a murder mystery, and it takes some mighty big twists and turns before the truth is revealed.

An explosive diary is also at the heart of this true story of marital infidelity, which caused a scandal back in the mid-19th century. The diary was the centerpiece of a divorce trial that shook the very foundations of Victorian society. Isabella Walker was stuck in a dead-end marriage to Henry Robinson when her husband found the journal where she revealed her innermost thoughts about everything — including her infatuation with Dr. Edward Lane. Miller says the diary is a rare candid look into the private life of a well-off upper-middle class Victorian woman. But Miller says Summerscale doesn't let the book depend entirely on the diary. She's a meticulous researcher who is accurate in every detail, yet can still "set a scene and tell a great story." Miller believes this is the "golden age of narrative nonfiction," and Summerscale does it better than just about anyone.

by George Orwell and Peter Davison

Diaries seem to be a theme this summer. But this one is about the inner life of George Orwell, author of 1984 and Animal Farm, books that left a deep imprint on the minds of many baby boomers who grew up wondering what life would really be like in 1984. Ulin says Orwell has been such an inspiration to him that he was fascinated to get this glimpse into his everyday life. Some of it is mundane — talk of the weather and what he did that night — but Ulin says those details can be revelatory: a literary icon takes shape as a living, breathing human being.

Sacco is a graphic artist who is also a journalist. For many years he has been traveling to the hotspots of the world: Iraq, Gaza, Bosnia, Chechnya. He takes photos that he uses as the basis for his drawings of real people like soldiers and refugees, caught in desperate situations. Ulin says there is something very interesting about the way Sacco uses the graphic images to put readers immediately into the story. It is, Ulin says, subjective journalism, but it's "subjective participatory journalism at its best." It's real reporting that just happens to look like a comic book.

Ulin didn't leave crime novels off his list, either. And this one is an homage to the genre. It's actually three novels in one, all set 10 years apart, each in the style of a different writer: Georges Simenon, Raymond Chandler and Jim Thompson. None of that would work, says Ulin, if the stories weren't good — but they are. And though Ulin doesn't want to give anything away, he will say that the three stories are connected. This book, says Ulin, honors the conventions of the mystery. It is serious and ambitious, but also playful — a very satisfying read for someone who likes crime novels a lot.

Best known for his popular and critically acclaimed Bascombe novels, Richard Ford leaves New Jersey behind for Montana in his new book. It is, says Ron Charles, a "spectacular novel." A husband and wife, down on their luck, decide to rob a bank — a bad idea for two people who know nothing about robbing banks. They get caught and are sent to prison, leaving their son Dell and his sister Berner to fend for themselves. Berner takes off, but Dell is spirited across the border into Canada, where he is taken in by Arthur Remlinger, a dark, unsavory character. This is just the kind of book you can get lost in on a summer day, says Charles, "it's long, beautifully written, has lovely characters and a lot to think about."

This story of a commune in upstate New York has a lyrical quality to it. It is, Charles says, "a very well-done book." The novel follows the life of Bit, the first child born to the commune in its early idealistic days. Through Bit's eyes, we see how the frailties and failures of the commune's founders inevitably lead to its destruction. And we follow Bit as a teenager and adult as he makes his way in the "real" world outside the commune. This book, Charles says, doesn't take a cynical view of communes as so many books do. The solid core of Arcadia is found in Bit. Charles calls him a "lovely, melancholy" character who gives the reader a glimpse into the pure motives that underlie the entire enterprise.