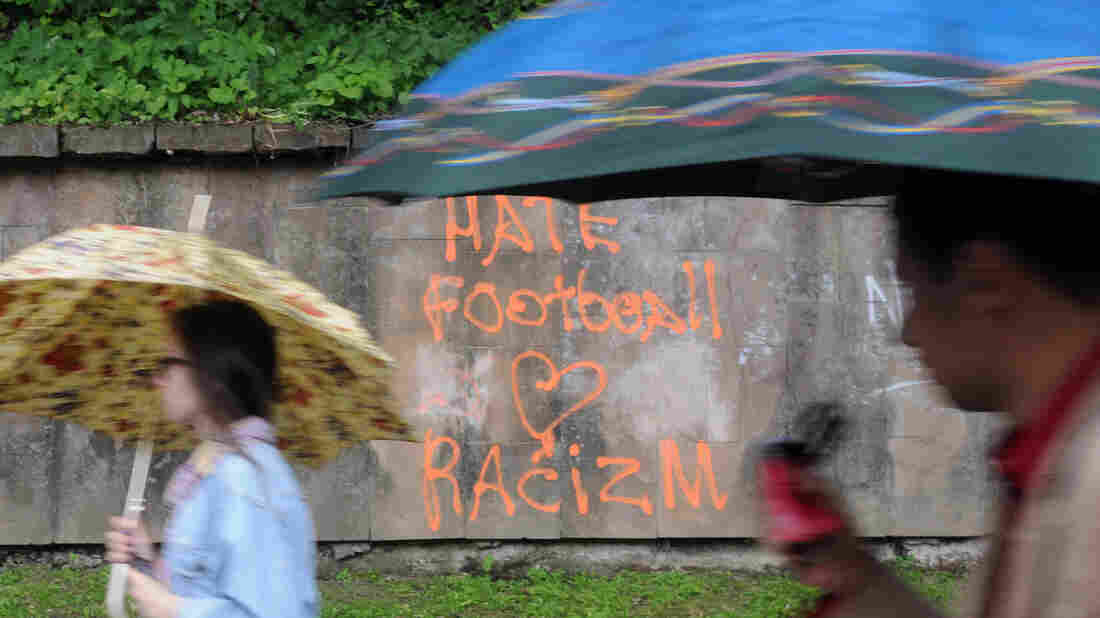 Racist graffiti on a wall in the Ukrainian city of Lviv earlier this month. A recent BBC report warned of widespread racism in Ukraine and Poland, the hosts of the European soccer championship. AFP/AFP/Getty Images hide caption 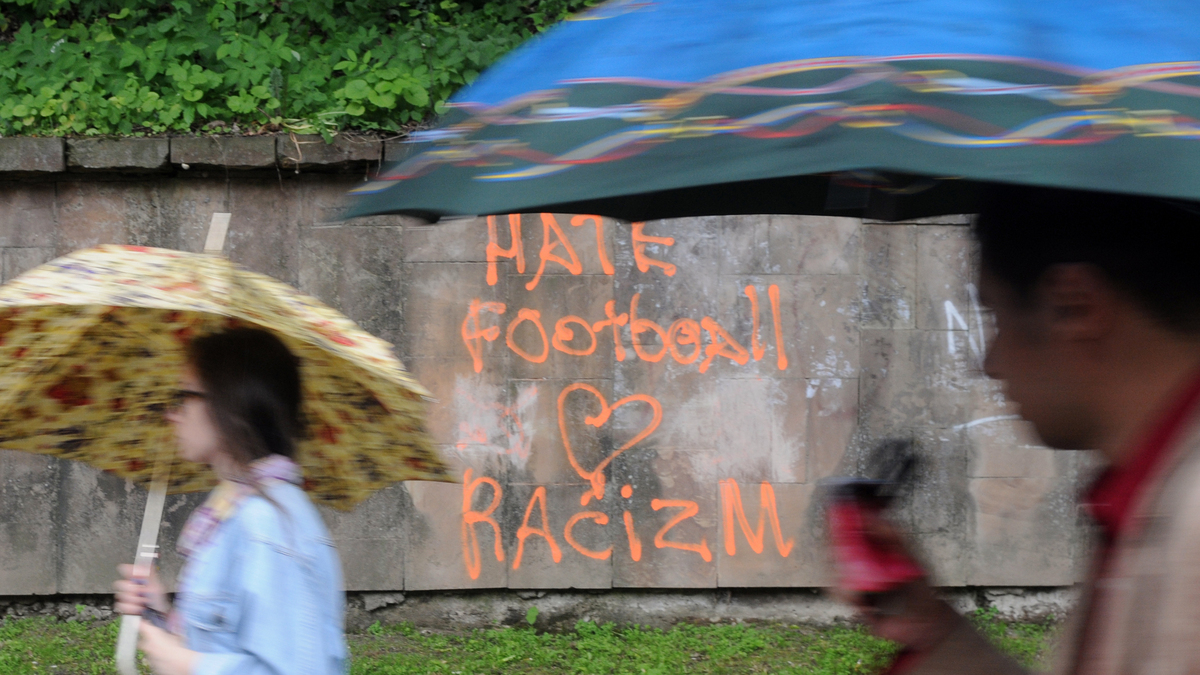 Racist graffiti on a wall in the Ukrainian city of Lviv earlier this month. A recent BBC report warned of widespread racism in Ukraine and Poland, the hosts of the European soccer championship.

The European soccer championship is taking place for the first time in former East Bloc countries Ukraine and Poland. The tournament is supposed to highlight Europe's post-Cold War unity, but the age-old plagues of racism and nationalism persist.

Ukraine is home to a small number of Africans and Asians, many of whom came during the Soviet period. One prominent expatriate in Kiev is Charles Assante-Yeboa, president of the local Africa center.

Assante-Yeboa says four years ago, a group of Ukrainians wielding knives and clubs attacked him.

"Dark-skinned people are not very safe in Ukraine," Assante-Yeboa says. "We don't go to the places where we know that we could be privy to attacks."

A recent BBC report warned that widespread racism in Ukraine and Poland threatened black and Asian fans at the Euro 2012 games. That report outraged many Ukrainians and Poles.

Oleg Voloshyn, a spokesman for Ukraine's foreign ministry, acknowledged Ukrainians are capable of making racist remarks in the privacy of their homes.

"But does this mean that these people are ready to take to the streets tomorrow with knives, with sticks and attack people just because they are of a different color?" Voloshyn says. "Surely not."

Max Tucker of Amnesty International, however, says the situation for blacks and Asians is far from safe, though attacks are down slightly in recent years.

"They've still reported to us 50 violent racial assaults last year," Tucker says. "In a country with so few black or colored immigrants, that is an astonishingly high number."

Rabid nationalism and soccer have long been a toxic mix in Europe. England and the Netherlands have long struggled with violent soccer hooligans.

During this current championship, Russia supporters brutally attacked stadium ushers after a game in Warsaw. Police used water cannons, tear gas and rubber bullets to disperse Polish and Russian fans who clashed before another game. Nearly 200 people were arrested.

Fears of racism have kept the families of some black players away from the games. Some players themselves say fans have hurled racial abuse at them in Poland. European soccer officials are investigating, but English fan Prince Conniff has had no trouble.

"I had thought a low point might be the negativity towards English or maybe towards black people," Conniff says. "Me being black and English, I haven't had [any] problem whatsoever."

Conniff didn't find Ukrainians overly friendly, he said, but they were "sufficiently nice."

Assante-Yeboa at the African Center was hoping to see many people of color at Euro 2012.

"We also see that [it] is an opportunity for the Ukrainian people to see the diverse number of people who live in Europe," he says.