Accessibility links
Frontlines Of Fatherhood: Catching Up After War This Father's Day, members of the 182nd National Guard regiment are home with their families. But in the year they were in Afghanistan, there was a lot they missed. "Overnight, your lives have changed," one soldier says. "Your son has grown up one year, and you kind of have to catch up." 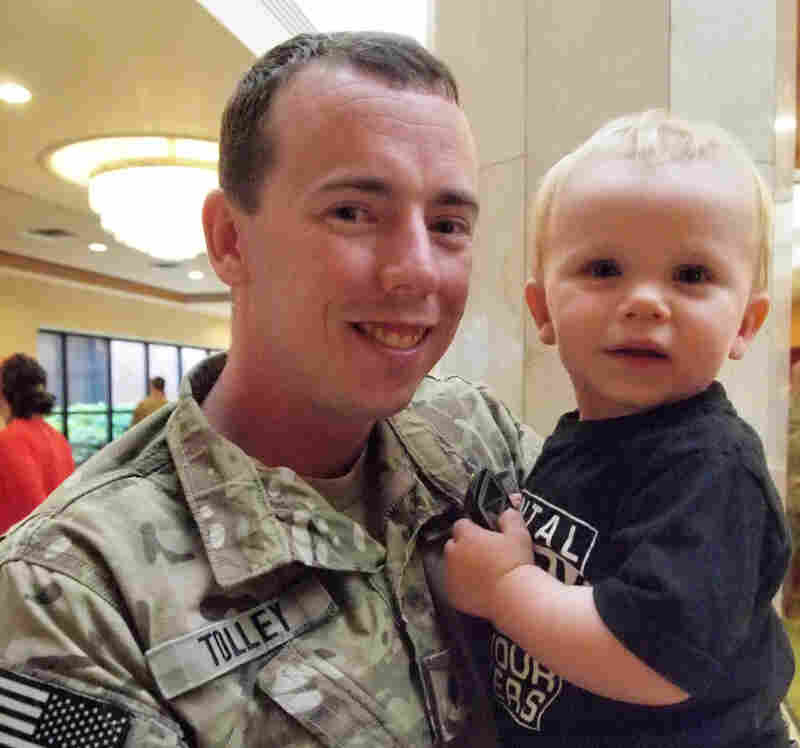 Spc. Bryan Tolley and his 18-month-old son, Ryan. Tolley says that while deployed he would see children that reminded him of Ryan and immediately call home. Tom Dreisbach/NPR hide caption 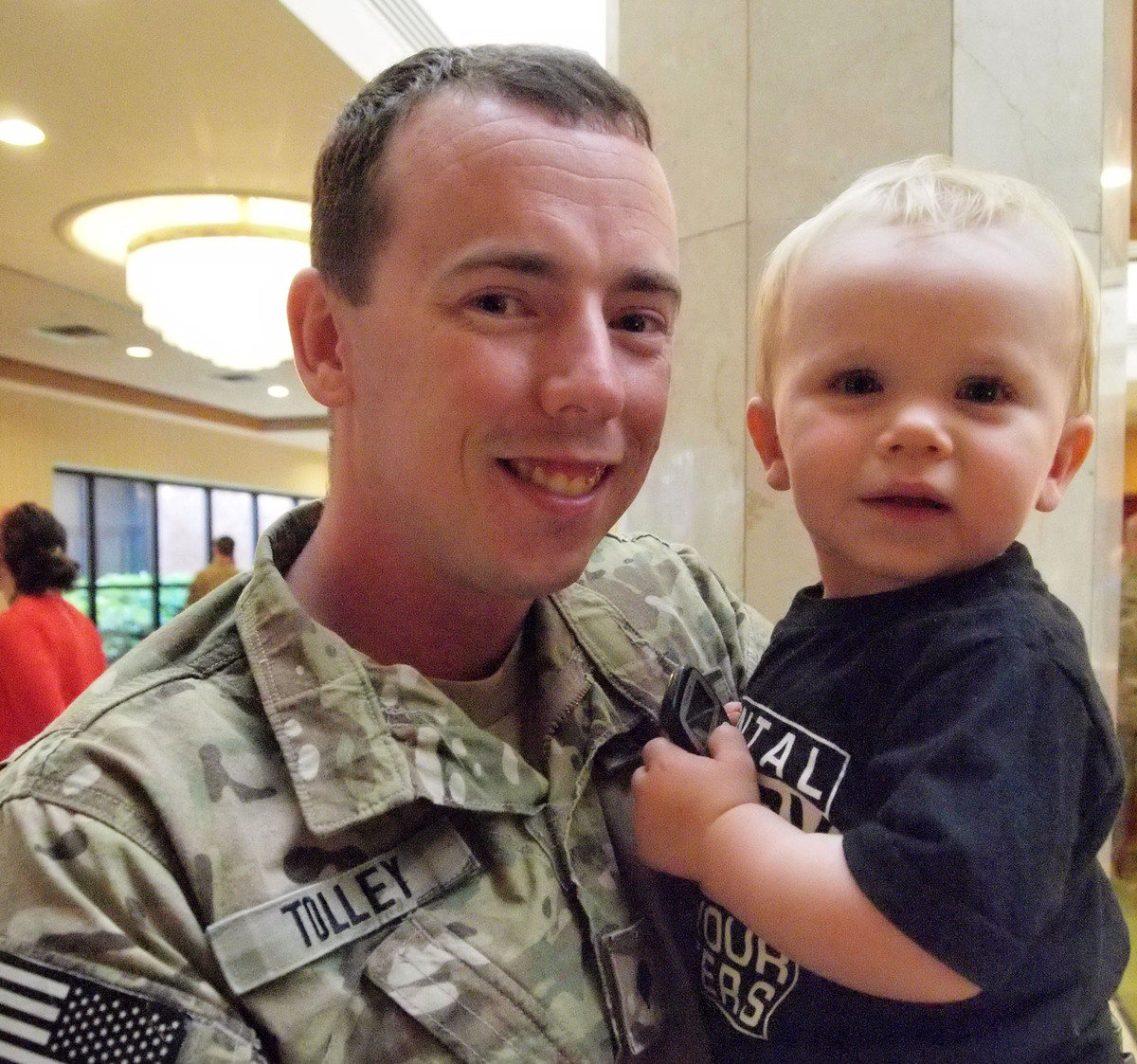 Spc. Bryan Tolley and his 18-month-old son, Ryan. Tolley says that while deployed he would see children that reminded him of Ryan and immediately call home.

Last year, members of the 182nd National Guard regiment marked Father's Day far away from their loved ones. This year, they're home with their kids after a year in Afghanistan.

Spc. Bryan Tolley, 29, knows the challenges of being both a soldier and a dad. His son, Ryan, is a shy, blond 18-month-old who happily clings to his dad.

"Seeing his face light up when he sees Dada come through his bedroom door instead of Mama — because he's so used to his mother — it's awesome. I love it," says Tolley of Plymouth, Mass.

At a Guard event in the state, he meets up with his friends from deployment. They take turns playing with Ryan.

"I wouldn't trade being a father for the world. It's one of the coolest feelings in the world," he says. "It really is."

Ryan was just a newborn when Tolley was told he was shipping out to Afghanistan.

"It was tough at first. It's one thing to be prepared for a deployment. It's another to know that you're going to be leaving a baby behind," he says. "When we found out we were pregnant, it was the coolest feeling in the world, but that was quickly shadowed by the fact that I was leaving in a few months."

Like other soldiers who have to leave behind families, he missed a lot of "firsts."

"First steps, first time eating solid food by himself. He started talking while I was gone, too," Tolley says.

It was his first deployment overseas. Tolley's unit was in Zabul province, which is relatively stable. Tolley says the nights over there were still, most of the time.

"I've learned a whole new definition of quiet," he says, "the creepy quiet."

Now, "quiet" has another definition.

"It's the good kind of quiet, the quiet when he's sleeping," Tolley says. 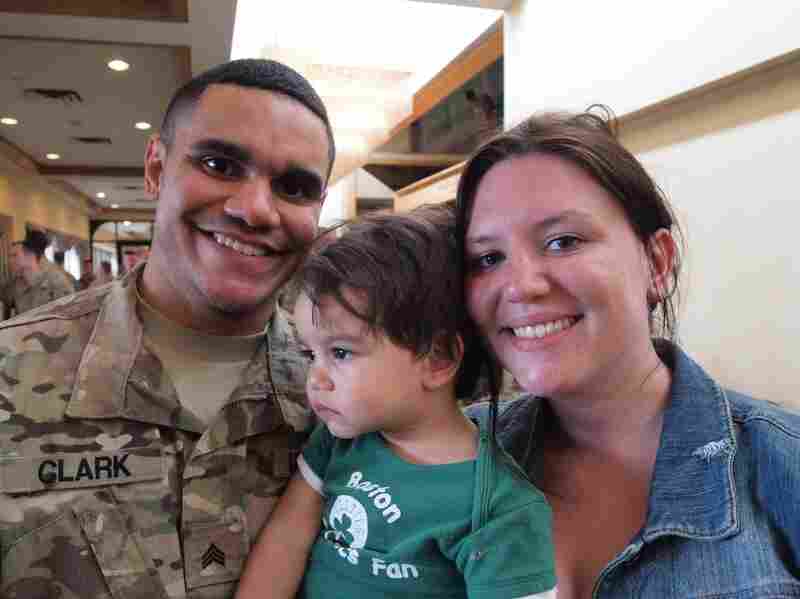 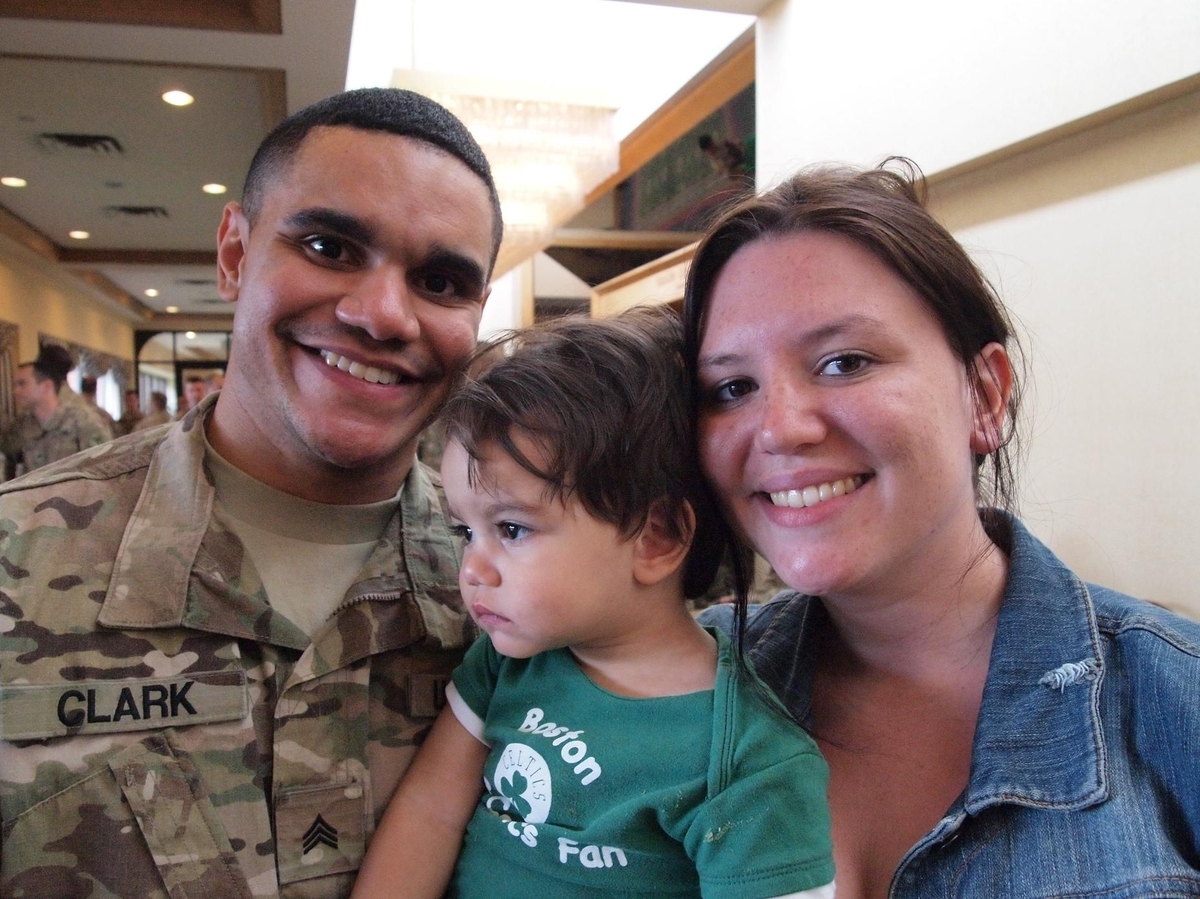 Sgt. Michael Clark and his fiancee, Kaitlin Forant, hold their son, Michael Clark Jr. It took time for the 18-month-old to recognize his father after Clark's deployment.

At the same Guard event, Michael Clark Jr., tries to squirm free from his dad. The meet-up is a chance for Sgt. Michael Clark to reunite with the guys from his unit. He was deployed to Nangarhar province near the Pakistani border. Now, Afghanistan seems a long way away.

"You're going to see a lot of love, a lot of handshakes, a lot of hugs," he says. "It's a really big family. It's pretty much a big group of kids all in uniform, but we do love each other, and I'm glad everyone came back safe."

Clark is right. Most of these soldiers are really young. Many, if not most of them, have kids of their own.

War and fatherhood have forced them to grow up quickly. Sometimes, the stress of those responsibilities can be overwhelming. Clark says it was tough when he first came home to his family. They had changed, and he had missed it.

"Overnight, your lives have changed. Your family has gone on one more year," he says. "Your son has grown up one year, and you kind of have to catch up."

That's what these soldiers are doing. Yes, there is a lot of stress. Many of them are now looking for regular civilian jobs. Some are dealing with injuries, even post-traumatic stress disorder. And a lot of them, like Tolley, are learning to be fathers for the first time.

This is a role that requires strength, endurance and, unlike soldiering, sometimes complete surrender.

"The one thing I think is wicked cute is [Ryan will] actually blow kisses, and he'll make the noise to go along with it," Tolley says. "He's always laughing. He's always got a smile on his face."

So does his dad.