Accessibility links
Obama And Congress: Bipartisanship Talk Met Reality When President Obama first campaigned for the office he now holds, he promised to change the tone in Washington. But the tone has only gotten nastier. And after using Democratic majorities in Congress to muscle through major legislation, he's increasingly been stymied by a wall of GOP opposition. 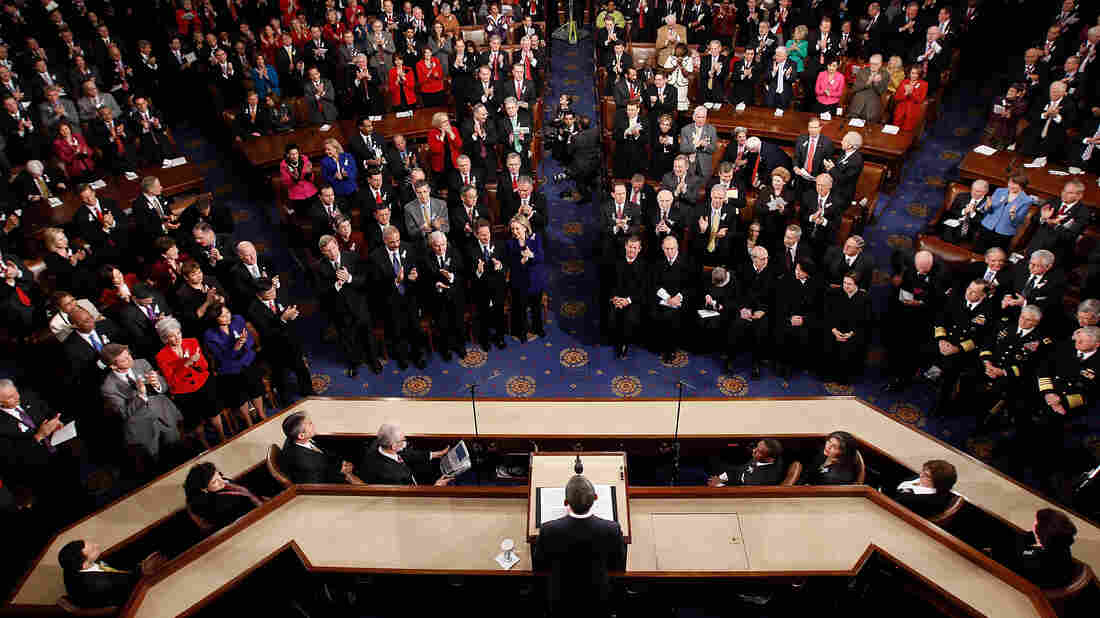 President Obama addresses a joint session of Congress while delivering his State of the Union speech in 2011. During his first two years in office, Obama used big Democratic majorities in Congress to muscle through major legislation, but since the 2010 midterm elections, he's increasingly been stymied by a wall of GOP opposition. Chip Somodevilla/Getty Images hide caption

From now until November, President Obama and GOP presidential candidate Mitt Romney will emphasize their differences. But the two men's lives actually coincide in a striking number of ways. That includes struggling with their respective legislatures. Earlier, NPR's David Welna explored Romney's time as governor of Massachusetts. In this installment of "Parallel Lives," a look at Obama and Congress.

When President Obama first campaigned for the office he now holds, he promised to change the tone in Washington. But that tone has only gotten nastier during his 3 1/2 years in office.

Obama once used big Democratic majorities in Congress to muscle through major legislation, but he's increasingly been stymied by a wall of GOP opposition. 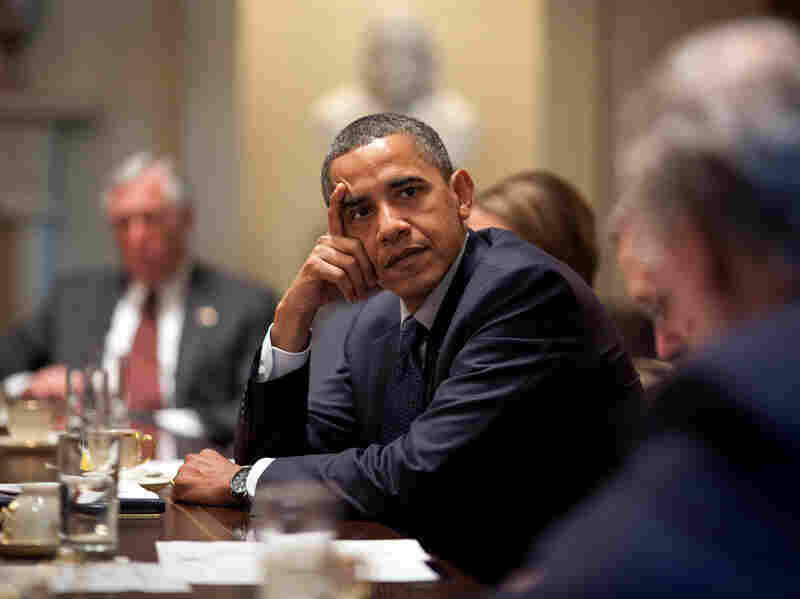 President Obama meets with members of Congress in the Cabinet Room of the White House in 2010. Pete Souza/White House hide caption 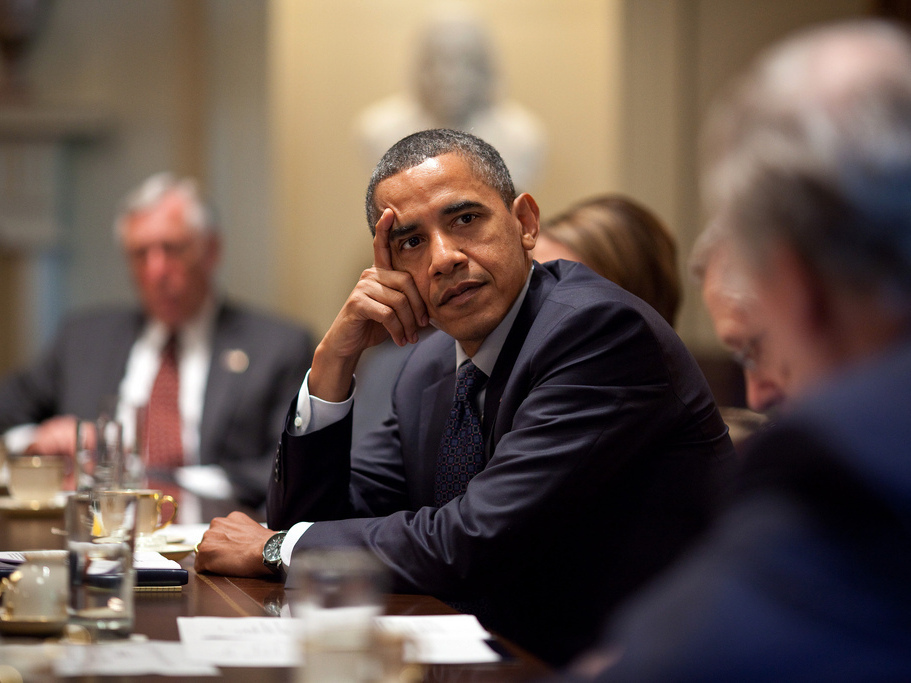 President Obama meets with members of Congress in the Cabinet Room of the White House in 2010.

The day he was sworn into office, Obama proclaimed a new era of bipartisan cooperation.

"What the cynics fail to understand is that the ground has shifted beneath them — that the stale political arguments that have consumed us for so long no longer apply," he said on the steps of the U.S. Capitol.

The new president demanded bold and swift action to fix a battered economy. Eight days later, the Democratic-led House approved an $825 billion stimulus package — without a single Republican voting for it.

"Everything got off on the wrong foot, essentially," says Sen. Olympia Snowe, a moderate from Maine who was one of the few Republicans the president lobbied on the stimulus.

It would have helped, she says, had the president widened his outreach.

"But that, for some reason, never really occurred," she says. "I mean, I don't know if the outreach didn't occur on the part of the White House or they just decided to try to secure, you know, enough votes to get it through the United States Senate with the 60-vote requirement."

It took the votes of Snowe and two other moderate Republicans to reach that 60-vote threshold, and only after Democrats agreed to shrink the package by $38 billion.

Sen. Dick Durbin of Illinois, the Democrat in charge of rounding up votes on the stimulus, says most Republicans had no interest in helping the bill move forward.

"I don't think they wanted the president to have any success at this, and the net result of it was the recession went on for longer than it should've," he says.

Problems On Both Sides Of The Aisle

Obama did, in fact, reach out on other matters to many of his former GOP Senate colleagues, including the man he beat in the presidential race, Arizona's John McCain. But McCain says there was no follow-through.

"After the election, I was invited over to the White House with a large number of congressmen and senators on the issue of immigration reform," he recalls. "I pledged that I would work with him. Never heard from them again."

And some of Obama's national security decisions proved too much even for members of his own party. In his first address to a joint session of Congress, the president declared a new approach to overcoming extremism based on American values.

"That is why I have ordered the closing of the detention center at Guantanamo Bay, and will seek swift and certain justice for captured terrorists," he said.

Despite the applause that followed, Senate Democrats later stripped a defense bill of the money the president had requested for shutting down Guantanamo. The Senate also voted 90-6 to bar the transfer of the facility's inmates to U.S. prisons.

Majority Leader Harry Reid, D-Nev., explained why: "The United States Senate, the Democrats and Republicans, do not want terrorists to be released in the United States — that's very clear." 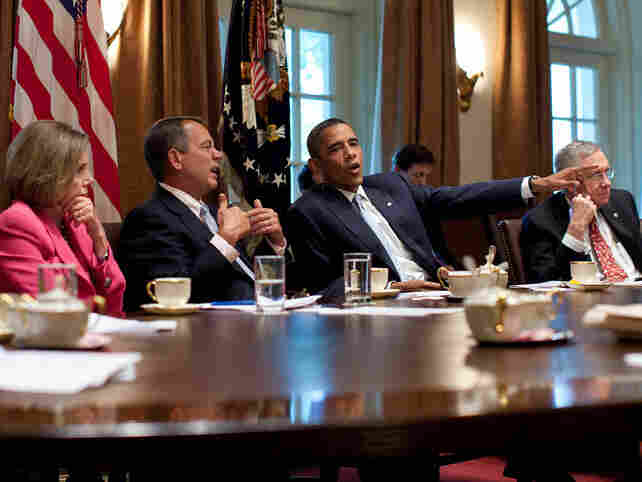 President Obama meets with congressional leaders in the Cabinet Room of the White House to discuss the debt limit and deficit reduction in July 2011. Pete Souza/The White House hide caption 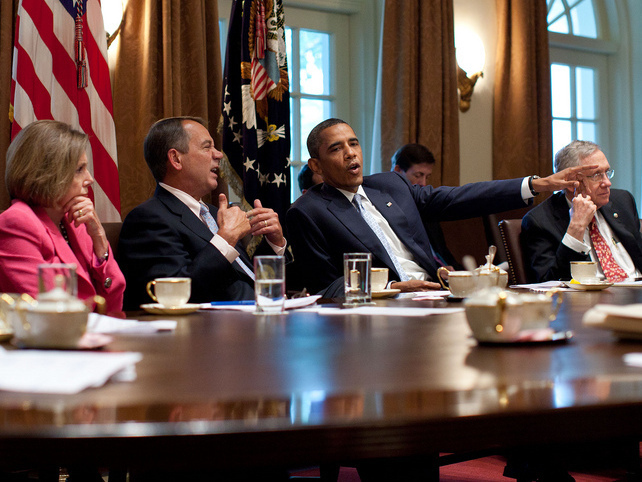 President Obama meets with congressional leaders in the Cabinet Room of the White House to discuss the debt limit and deficit reduction in July 2011.

A month later, just as current GOP presidential candidate Mitt Romney had done as governor of Massachusetts, Obama pushed Congress for legislation vastly expanding health care coverage. He announced his intention to do so a year and a half earlier, the night he won the Iowa caucuses, promising to bring "Democrats and Republicans together to get the job done."

But once again, Republicans balked at the president's plans. He tried rallying support for his health care bill in an address to Congress in September 2009, only to have South Carolina Republican Rep. Joe Wilson publicly accuse him of lying.

In the end, not one Republican in Congress voted for the final health care bill. Presidential and congressional scholar George Edwards of Texas A&M says Obama essentially gave up on the Republicans.

"The president spent a lot of time negotiating with Republicans to try to get bipartisan support, but he couldn't. He couldn't achieve that," Edwards says. "Ultimately, he did what is necessary in these days, and that is you, in effect, ram things through on a partisan vote."

Republicans ran against the health care law and won control of the House in midterm elections; they picked up half a dozen seats in the Senate. Senate Minority Leader Mitch McConnell, R-Ky., then issued his fellow Republicans these marching orders: "Our top political priority over the next two years should be to deny President Obama a second term."

After a market-rattling showdown with Republicans over raising the debt ceiling last summer, Obama effectively declared no more Mr. Nice Guy. His courting of Congress now sounds more like taunting.

He recently told a cheering crowd at the University of Nevada, Las Vegas: "You're not suddenly just sitting around, not doing anything. You should expect the same thing from your representatives in Washington."

"I mean, the fact that the president is not able to run for re-election on what he would regard as his two biggest accomplishments, the stimulus and health care, because they're still unpopular, suggests again if he wants to get something done, he's going to have to find a way to move toward the middle," Cole says.

But as this president has learned, the middle is a place where little gets done, at least in this deeply divided Congress.