Accessibility links
Confined To A Thai Fishing Boat, For Three Years Thailand has a huge fishing industry that's chronically short of workers. Human traffickers recruit desperate men from Cambodia and Myanmar, who then find themselves at sea for extended periods in miserable conditions. One man says his ordeal lasted three years. 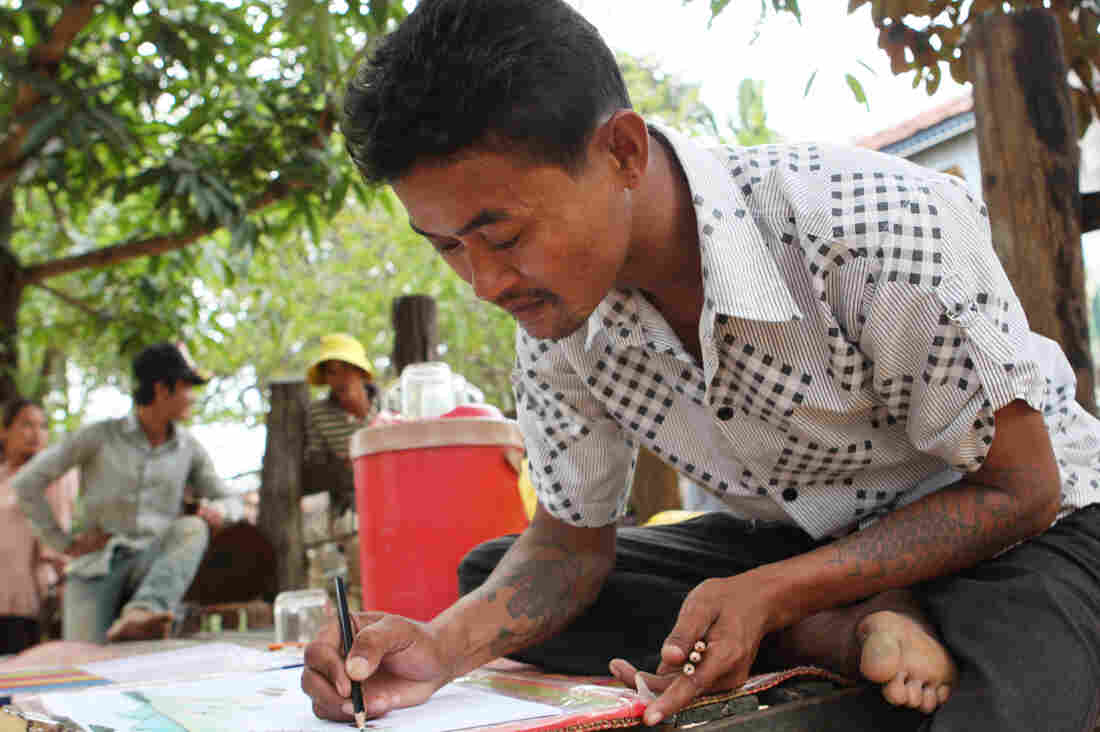 Vannak Prum of Cambodia was sold onto a Thai fishing boat where he was forced to work in miserable conditions for three years before escaping. Thailand's huge fishing industry is coming under increasing criticism for using trafficked workers who have been sold to unscrupulous ship captains. Becky Palmstrom and Shannon Service for NPR hide caption

Thailand supplies a large portion of America's seafood. But Thailand's giant fishing fleet is chronically short of up to 60,000 fishermen per year, leaving captains scrambling to find crew. Human traffickers have stepped in, selling captives from Cambodia and Myanmar to the captains for a few hundred dollars each. Once at sea, the men often go months, or even years, without setting foot on land.

Cambodian Vannak Prum's destiny changed in a dirt-road town called Malai. It's a Cambodian outpost on the border with Thailand that is known for its involvement in the trafficking of human beings.

Prum arrived in Malai seven years ago searching for work. His wife was pregnant, and he needed money for the hospital bill. He intended to work for two months, but ended up meeting a human trafficker.

A few days later, Prum was sold onto a Thai fishing boat the length of a basketball court, where he worked in tight conditions with 10 men. He says he didn't reach land again for three years.

"I didn't get paid," he says. "I remained in the middle of the sea and worked day and night."

As Thailand grows more prosperous, its citizens are shunning fishing work in which, even in the best cases, men are away for months chasing dwindling fish stocks.

Injuries and fatalities are common, and seasickness — at least in the beginning — is constant. Wicharn Sirichai-Ekawat owns a small fleet of fishing boats and consults with the National Fisheries Association of Thailand.

Some of these men are recruited legally, but others, like Prum, are sold into bondage. They report 20-hour days under mind-numbing conditions: minimal fresh food or water, no medicine apart from aspirin, cramped bunks, unsafe conditions and the relentless smell of fish.

"Sometimes the winch cable would accidentally cut off," Prum says. "If any of us stayed in front of it, the cable would injure or even kill us."

Ship bosses pose their own hazards. "One man's head was cut off and thrown in the water," Prum says. "I saw it."

The United Nations Inter-Agency Project on Human Trafficking interviewed fishermen on Thai boats who are from Myanmar, also known as Burma; 59 percent said they witnessed a murder by their captain.

The fishermen also said that captains often give workers drugs — mainly amphetamines — so they will keep working through the night.

I didn't get paid. I remained in the middle of the sea and worked day and night.

Vannak Prum, Cambodian who was held on a Thai fishing boat for three years

The fishing boats are able to stay at sea for extended periods thanks to a network of shuttle boats, or motherships, that come and pick up the fish that's been caught and deliver fuel, food, ice and other supplies that fishing boats need to keep going.

Ultimately, Thai fish products show up on American shelves in a variety of ways, from fish sticks to pet food.

The Thai boats catch an estimated 1 in 5 pounds of American mackerel and sardines, and a good portion of anchovies on American pizzas. Thailand's two biggest seafood exports — farmed shrimp and tuna — are not implicated in these particular abuses, but have labor and environmental concerns of their own.

Now 33, Prum looks out the window in Malai, perplexed by the changes that have transformed the place over the past seven years.

"When I was here last, there was a roundabout," he says. "Now I'm lost, because they removed the traffic circle."

It's midnight, and Prum cruises slowly through the dark. He is looking for his trafficker.

A Network Of Traffickers

The man who sold Vannak Prum into these conditions is part of a loose network of human traffickers that stretches from the bustling ports of Thailand, deep into remote villages in neighboring Cambodia and Myanmar.

"I don't know if the Thai side takes money," he says, "but I know they take it on the Cambodian side." Khunnal says he wants to address the problem, but too many people profit from human smuggling.

In Prum's case, he met a taxi driver who convinced him to search for better paying work in Thailand. When the driver brought him to Malai, Prum was introduced to a man who was a trafficker, but Prum got cold feet and tried to back out.

The driver, however, presented Prum with a $12 tab for the trip, which Prum couldn't pay. The trafficker then stepped in and paid the fare, and that effectively sealed Prum's fate. 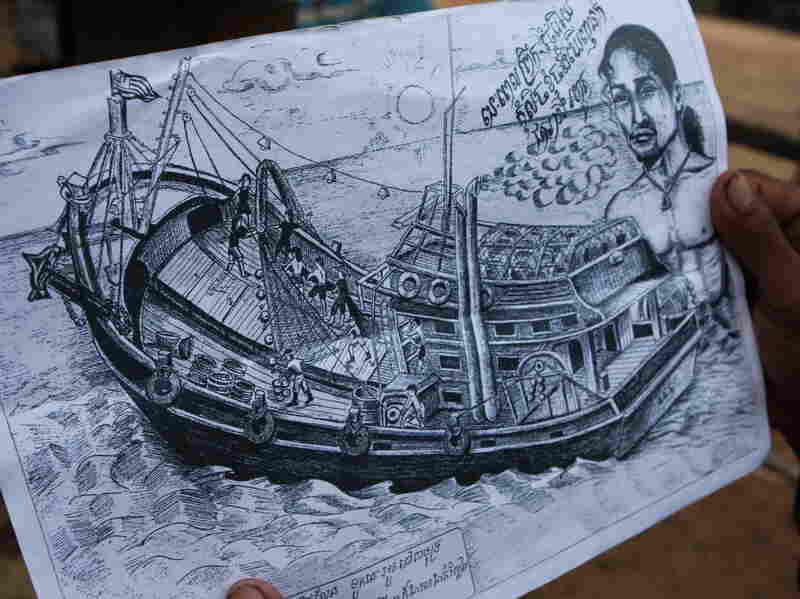 Prum drew this picture of the Thai boat on which he was held and forced to work as a fisherman. Becky Palmstrom and Shannon Service for NPR hide caption 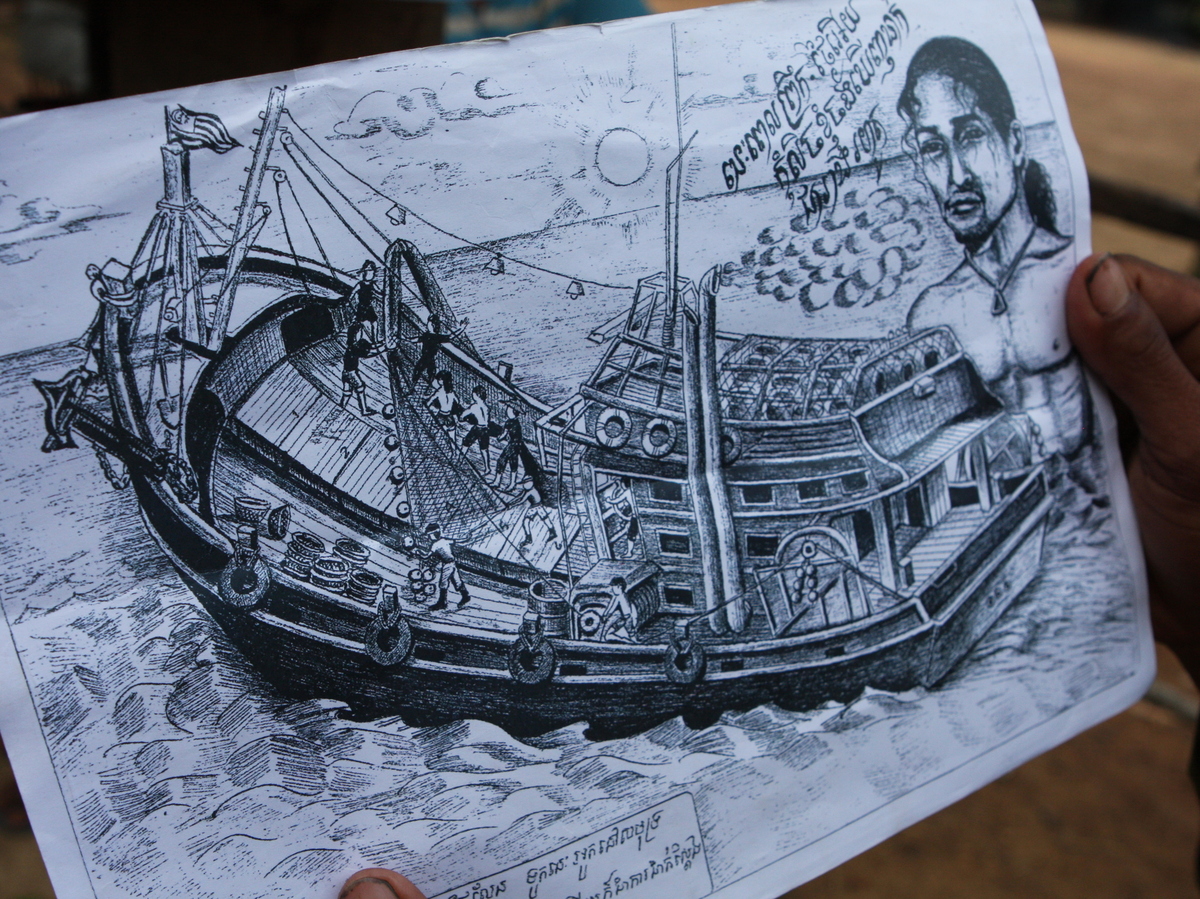 Prum drew this picture of the Thai boat on which he was held and forced to work as a fisherman.

Prum pressed his face against a crack in the building.

"I saw the sea and boats," he says. "That's when I realized I was trafficked."

Officials Get A Cut

"Most of the time when migrants are arrested, the police aren't planning to make a case or hand them over to immigration, as they're required to do," he says. "What they're doing is holding them and then trying to extort money out of them."

"Every part of the Thai officers will benefit from this — the province, police, labor officers," says former Marine Police Commander Surapol Thuanthong. "They all get bribes from illegal migrants and related businesses."

Thuanthong says Thailand's Marine Police have tried to convince the Thai government to make the workers legal so they can be tracked and protected — but the sheer number of undocumented workers makes it impossible.

"[The government] says it's too many and will affect the stability of the country," he says. "So they don't do anything."

Building A System To Track Workers

If it works, legalizing workers could undercut the black market in men. But it's too soon to tell if that plan will work. In the meantime, men like Prum continue to be sold onto the seas against their will.

This river of men weighs heavily on Prum's mind as he winds through Malai.

"I wanted to come help so Cambodians wouldn't go work in a foreign country," he says. "And now you see everything has changed completely — the road, the house — everything."

Prum didn't find his trafficker. He slumps against the car door.

If he had found him, what would he have done?

"I was angry before," says Prum, "because he did a bad thing. But now I don't feel any anger or revenge at all. I wanted to find him and tell him not to do this job anymore because it does harm. "

With that, the car turns around and drives past the empty money-changing stalls and the restaurants with cots for border-crossers set up in back. Prum keeps his gaze straight ahead as he leaves Malai. He doesn't say a word.

Several groups are helping ex-fishermen get back to their home countries and are supporting them once they get there. They include Tenaganita, Healthcare Center for Children, LSCW, the Labor Protection Network and LICADHO. The Made in a Free World app lets you ask brands about labor practices in their supply chain as you shop.

Research support for this series was provided by the Investigative Fund at The Nation Institute.