Accessibility links
How Journey Found A New Lead Singer In Manila When Journey went looking for a new lead singer, they turned to the most obvious place: YouTube. What they found, a new documentary explains, was a bar singer from Manila who became the frontman of a quintessentially American band. 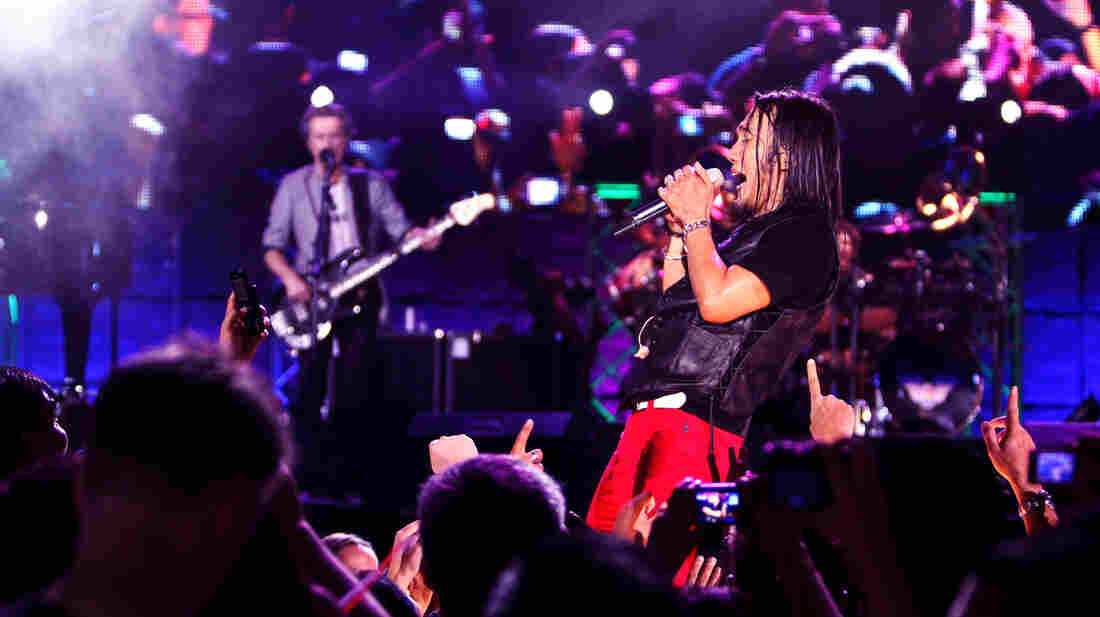 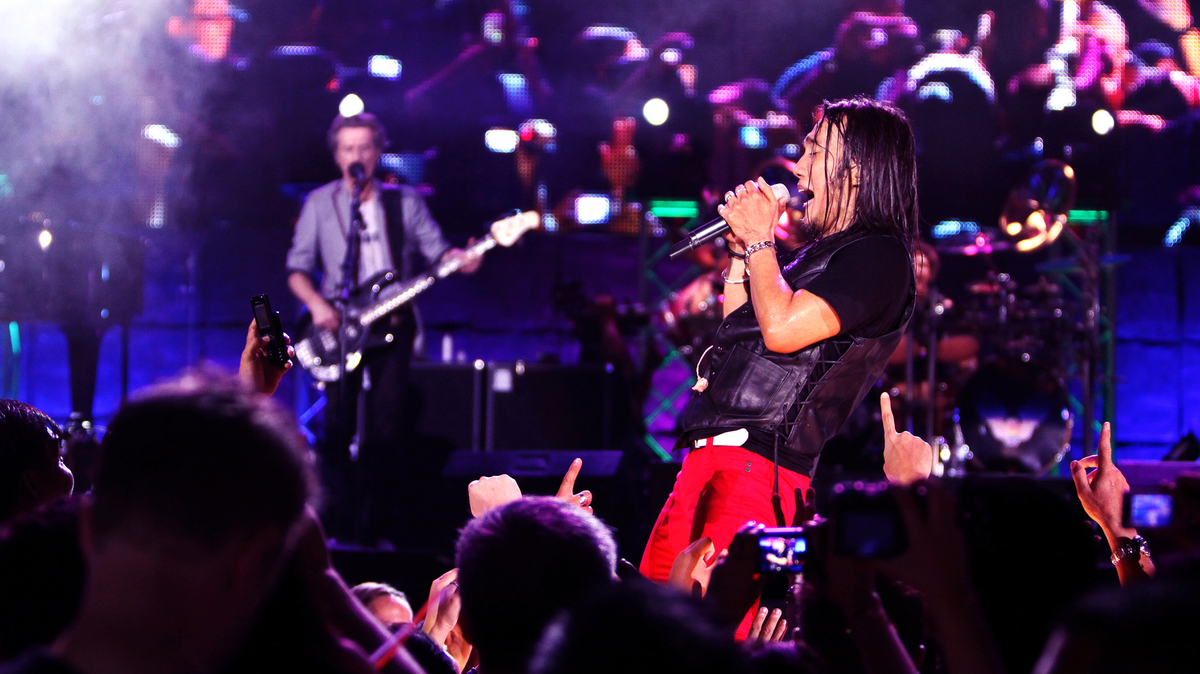 Arnel Pineda became the lead singer of Journey in late 2007.

One of the oddest things about the story of Arnel Pineda is that it's not actually quite as odd as it might seem.

Pineda was a bar and club singer working in Manila in 2007, doing some original material but finding an audience mostly for his covers, when he got an e-mail from Neal Schon, the guitarist from Journey. Schon had seen videos of Pineda performing on YouTube and asked him to come to San Francisco and audition to become the band's new lead singer. From Journey fan to Journey member, because of YouTube.

That's the hook of Don't Stop Believin': Everyman's Journey, which opened Silverdocs on Monday night. Director Ramona S. Diaz followed Pineda and the band from the time shortly after he started rehearsing with them through their very successful 2008 tour and their – the word is a cliché, but it applies – triumphant show in Manila in March 2009 when they brought him back home a hero, the successful lead singer of an iconic American band.

There is a certain fairytale quality to all of it – the guy who was singing Journey covers when he suddenly got The Call – but really, it's not that weird. Schon didn't stumble on him accidentally or get an e-mail from someone that said "You've got to see this guy!!!"; he found Pineda while specifically searching YouTube for lead singers, because it's a not-unusual way to find musicians. Maybe he was even looking for lead singers doing Journey songs. Maybe even for lead singers doing Journey songs who sounded a lot like former lead singer Steve Perry – which Pineda surely does. Other than the fact that he was in the Philippines, Schon found his guy the way he set out to find him.

Pineda isn't quite as young as he sometimes seems in the film; he can seem like a kid, but he turned 41 during the 2008 tour. He's a stretch younger than guys like Schon, who's pushing 60, but he's not Justin Bieber being plucked from YouTube because he's never done anything. The story threatens at times to become a wacky internet novelty, but at its best, it's something a bit more satisfying than that. At its best, it's about a working singer – not a YouTube fluke, but a working, day-in-day-out singer who's been playing for years and years – can suddenly find himself jumped to the head of the line, playing to 22,000 people with musicians he's admired all his life. It doesn't have a lot to do with YouTube; the better story is about a band taking a huge risk on a completely unknown quantity because they need a guy and they found one they think will be a fit.

(As a side note, as tempting as the "Don't Stop Believin'" title is, I would have gone with a variation on "Journeyman." Just a suggestion, pun-wise.)

The best parts of the film focus on Pineda; he has a playful attitude toward his own sometimes overwhelming anxiety about the situation into which he's been thrust. He turns out to be a terrific fit for the band, despite his own comment that partly because he's "so Asian," he looks like they Photoshopped him in when Journey has photos taken. In fact, one of the guys in the band comments that bringing something a little more "international" to the "all-American" group is probably an advantage – a prediction that proves true when Pineda helps the band develop an impassioned following of Filipino-American fans in addition to the people back home in Manila. (The security team notes at one point that for some of Arnel's fans, he's "like Elvis.")

But at almost two hours, the film feels long. It comes to what seems like a natural ending at one point, and then it goes on for probably another 20 minutes. There are some background segments on the general history of Journey that don't seem to have been made with the love that went into the Pineda-era stuff, and a persistent subplot about Pineda getting colds and drinking tean — while care of the voice makes a nice tour detail — keeps coming back and back and back but never really goes anywhere.

Then there is also the problem of "Don't Stop Believin'" itself. I don't think it's a spoiler – I really, truly cannot imagine how it could be – to tell you that the film builds to the performance of that particular song. This tour happened after The Sopranos put "Don't Stop Believin'" in the spotlight but before Glee put it there again, and the closing titles of the film point out that it's now the most downloaded song written in the 20th century. But at some point, waiting for it becomes a bit of a tease, and the build to the performance (and the holding out on playing much of that song after playing most of Journey's others that are well-known, sometimes more than once) turns into a game. I would have dropped the bomb a little sooner, just to avoid the sense of inevitability.

But the film is fun, and it's worth seeing, not because it's the tale of an internet sensation, but because it's the tale of a bunch of guys who really, really want to hear crowds scream – either again or for the first time ever. As much as it's about how a band lifted an unknown singer into a dreamlike world of screaming crowds and far more money than he'd ever known, it's also about how a band found just the right guy at just the right time to help capitalize on the surprise comeback of one of the band's most famous songs. Pineda says at one point that it's like hitting the lotto, what happened to him, but in truth, Schon hit the lotto, too. You can see the guys standing around him at certain moments, looking at him or watching him perform, realizing that he's incredibly grateful to them, but in fact, without him, they are out of luck.

There's an argument to be made that when you set out to find your new lead singer looking specifically for someone who can sing your existing hits and make them sound just like they did when your old lead singer sang them – rather than being primarily focused on a guy who can contribute to whatever your next identity is – you run the risk of essentially covering your own music. Under this theory, Pineda was originally recruited to be the lead singer of the most famous Journey cover band in the world – the one called Journey. But they have since released two albums of new material, and it seems to be a little more than that. It may even be a little more than Schon expected to find on YouTube.