Accessibility links
Senators Get Time In Solitary Confinement Advocates for prisoners have long argued that confinement conditions in prisons violate the constitutional ban on cruel and unusual punishment. On Tuesday, they made their case before a Senate Judiciary subcommittee, complete with a replica prison cell in the hearing room. 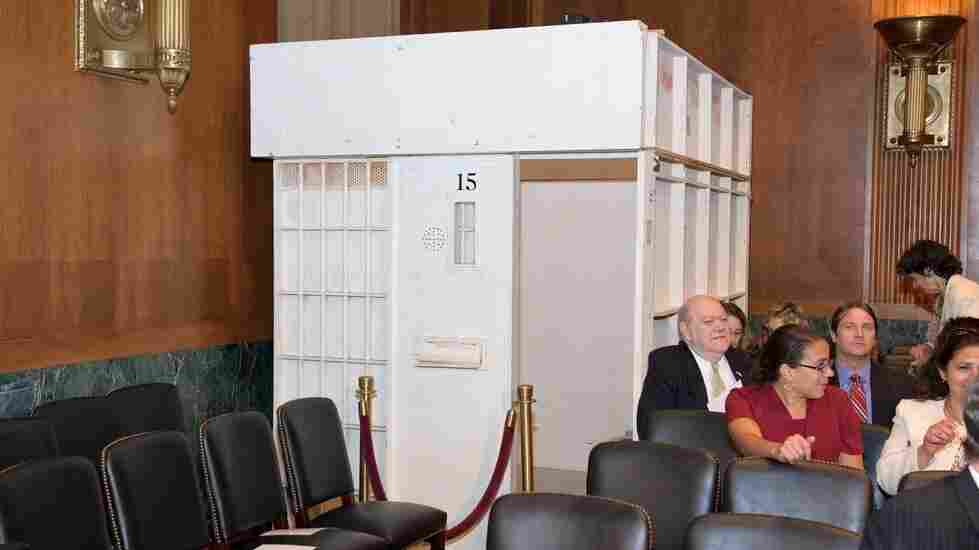 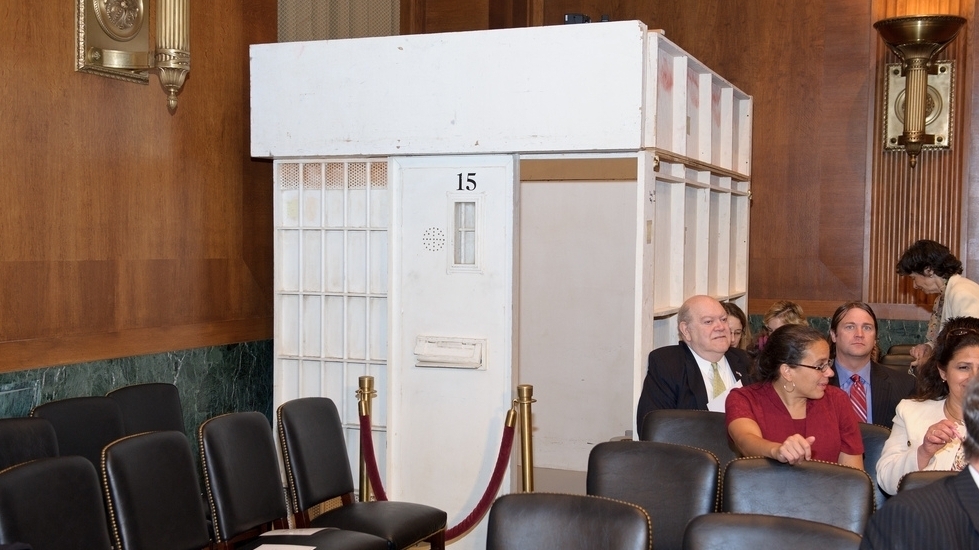 To illustrate living conditions under solitary confinement, a Senate Judiciary subcommittee erected a cell replica inside a Capitol Hill hearing room on Tuesday.

At any given moment, about 15,000 men and women are living in solitary confinement in the federal prison system, housed in tiny cells not much larger than a king-sized bed.

"It is hard to describe in words what such a small space begins to look like, feel like and smell like when someone is required to live virtually their entire life in it," says Craig Haney, a psychologist at the University of California, Santa Cruz.

But Tuesday, Haney, who has studied life inside prisons for three decades, had an opportunity to paint that picture.

Haney and other advocates had gathered in Washington to testify about solitary confinement to members of the Senate Judiciary subcommittee on civil and human-rights issues. Committee members say they want to explore the costs of long-term isolation in U.S. prisons. 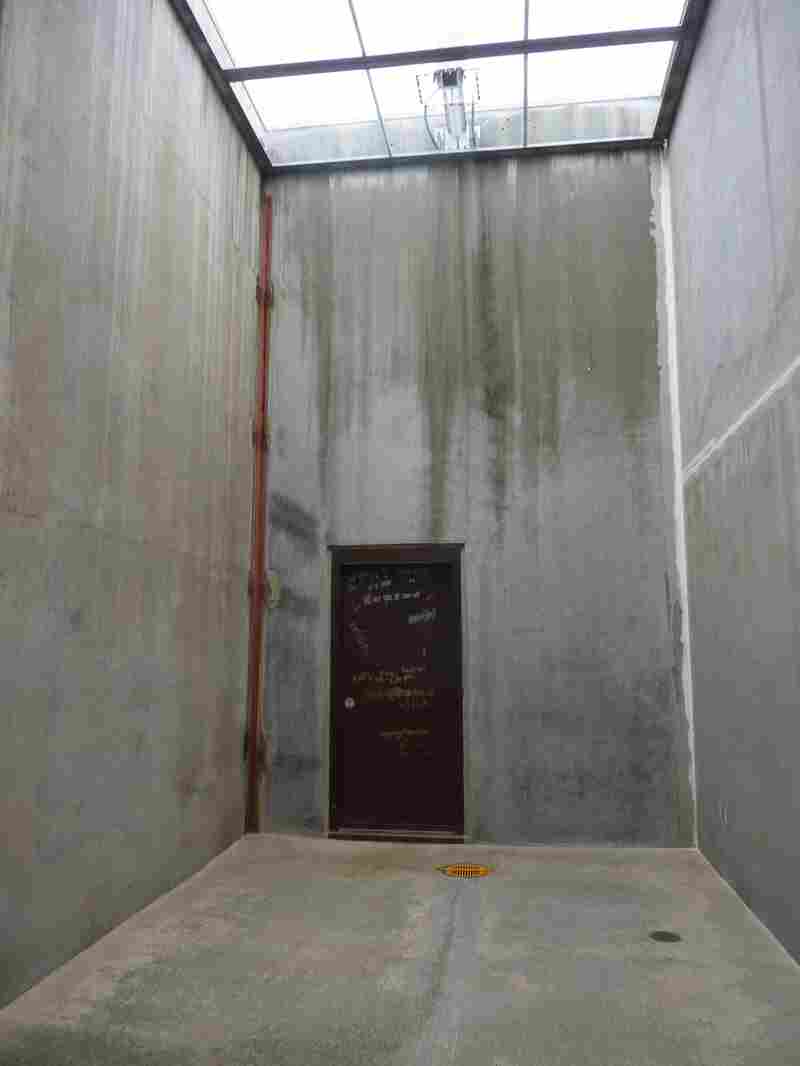 An exercise area for inmates in solitary confinement in California's Pelican Bay prison. Inmates are allowed to leave their windowless cells for 2 1/2 hours daily to exercise and bathe. Michael Montgomery/Center for Investigative Reporting hide caption 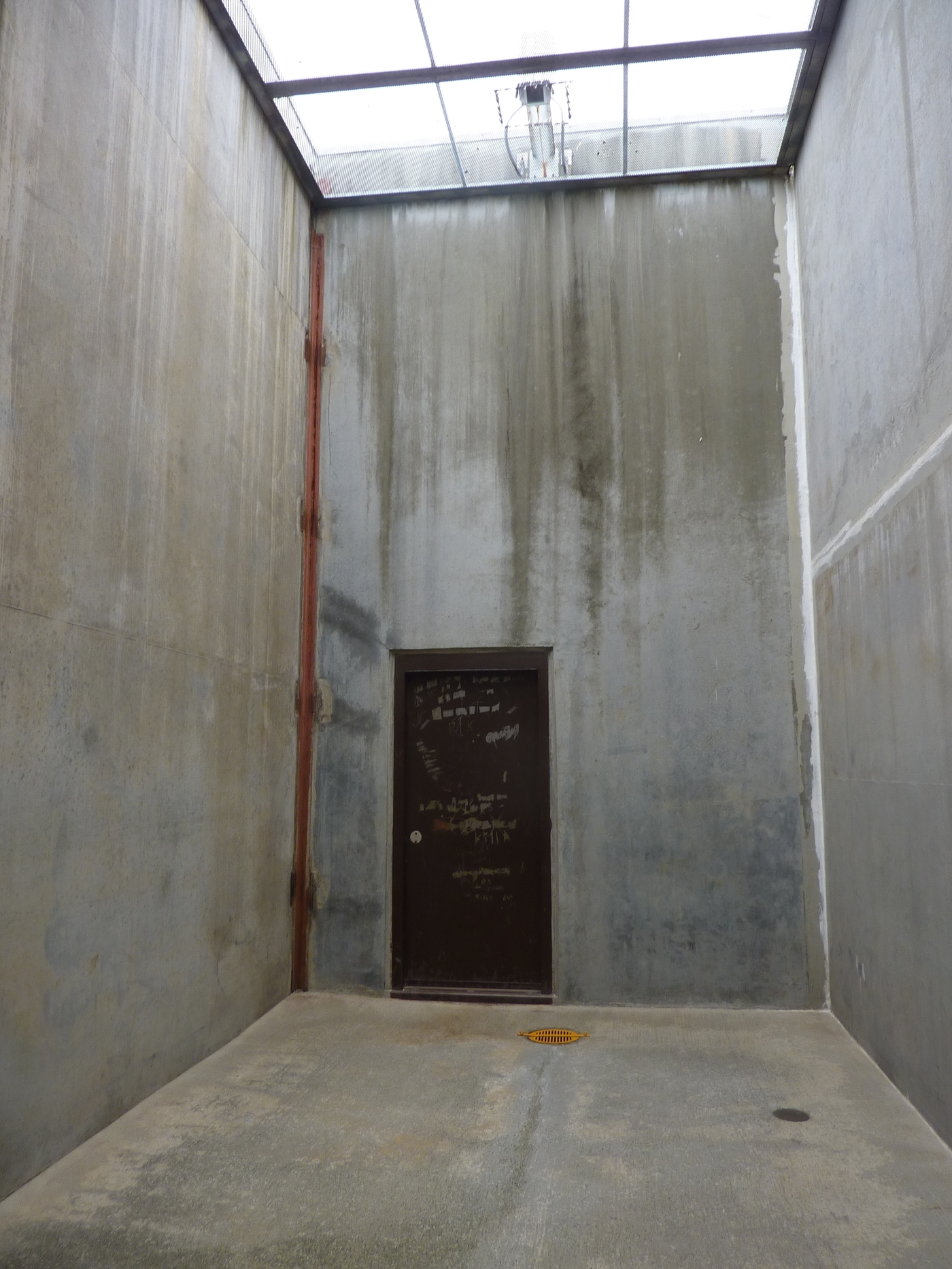 An exercise area for inmates in solitary confinement in California's Pelican Bay prison. Inmates are allowed to leave their windowless cells for 2 1/2 hours daily to exercise and bathe.

To help illustrate living conditions in solitary, committee members asked the architect's office in the U.S. Capitol to set up a replica of a cell — a tall white box with no windows — right inside the hearing room.

The replica provided the backdrop for what lawmakers called the first-ever congressional hearing on solitary confinement.

The sight was all too familiar for Anthony Graves. He lived for years on death row in Texas before he was exonerated in 2010.

"Solitary confinement, it breaks a man's will to live," Graves said. "He deteriorates right in front of your eyes."

Graves described how he saw inmates attempt suicide and cut themselves — and much worse. "There's a man right there, sittin' on Texas death row right now, who's housed in solitary confinement — pulled his eye out and swallowed it," Graves said.

One case focuses on California's Pelican Bay facility, where nearly 100 inmates have been held in isolation for 20 years. The Center for Constitutional Rights filed the federal suit on the prisoners' behalf.

The other case involves a so-called Supermax prison in Florence, Colo. Lawyers have sued the Federal Bureau of Prisons, charging that many of the 490 prisoners living in solitary there have severe mental problems and aren't getting the help they need.

Both lawsuits argue that solitary confinement violates the Eighth Amendment ban against cruel and unusual punishment.

At Tuesday's hearing, panel Chairman Sen. Richard Durbin (D-Ill.) pressed Charles Samuels, the director of the Federal Bureau of Prisons, for his view.

"Do you believe that ... solitary confinement, 23 hours a day — five hours a week when you're allowed to leave that box or something that size — do you believe based on your life experience that's going to have an impact on an individual?" Durbin asked.

"I don't believe it's the preferred option," Samuels replied. But he said he must have someplace to put the most dangerous killers.

"We believe we have solitary confinement for the inmates who pose the most violence and disruption within the facility," he said. "We utilize it as a deterrent, to correct the behavior."

When pressed, Samuels reiterated that he feels solitary is an effective deterrent, but Sen. Lindsey Graham (R-S.C.) said he'd like to see more research on the issue.

Conditions At California Prison To Be Reviewed

Lawmakers also heard from state officials, including Christopher Epps, commissioner of the Mississippi Department of Corrections.

Epps said people need to remember that most inmates — including those held in isolation — eventually get out.

"We realize that 95 percent of all the individuals ... incarcerated in Mississippi is coming back to our neighborhood, whether we like it or not," Epps said.

That's important, said Graves, because when those former inmates come back, they can bring what they learned in solitary with them.

"I had no physical contact with another human being for 10 of the 18 years I was incarcerated," Graves said. "Today I have hard time being around a group of people for long periods of time without feeling too crowded."

Graves says he survived his experience, but those 18 years were no way to live.