Accessibility links
Illegal Fishing, Molotov Cocktails, A Daring Escape Vannak Prum was forced to work on a Thai fishing boat for three years before he escaped by jumping overboard. With little oversight, rogue captains buy men like Prum from traffickers and use them to plunder the fishing grounds of surrounding nations. One expert calls it "a perfect storm of slavery and environmental degradation." 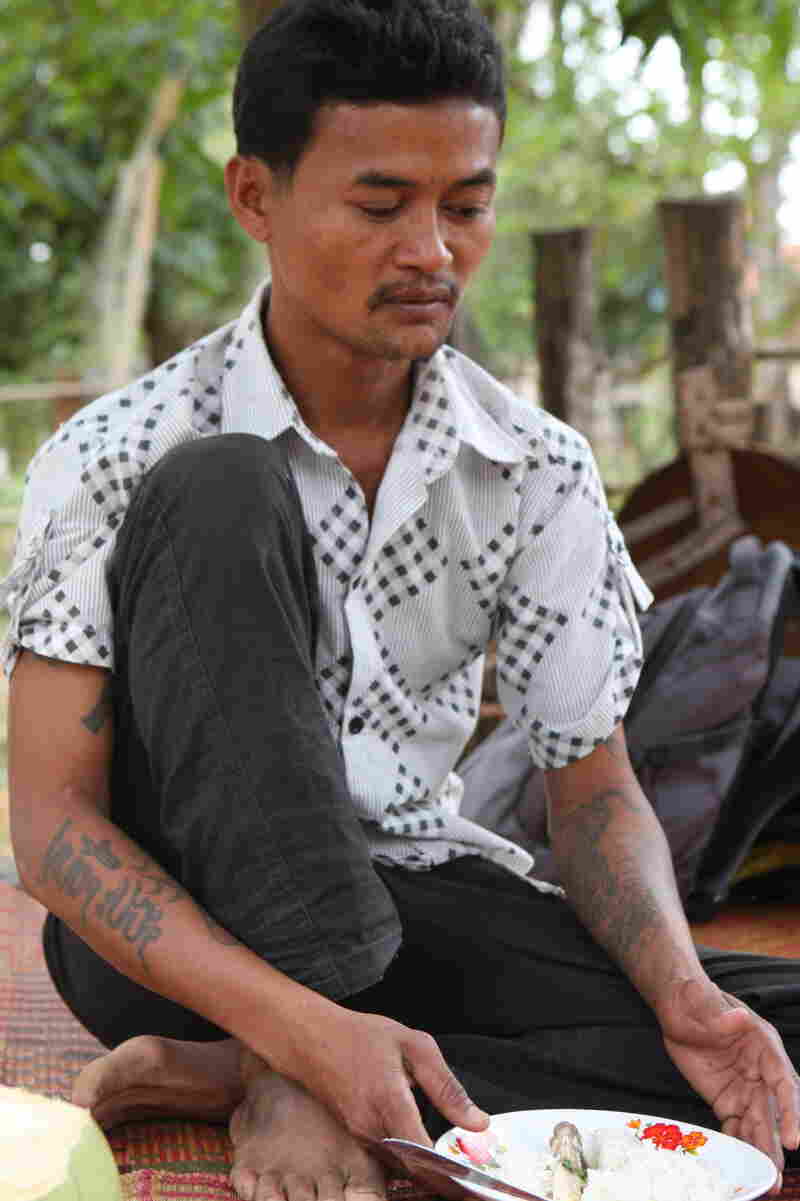 Vannak Prum of Cambodia was trafficked onto a Thai fishing boat and forced to work for three years before he escaped by jumping overboard. He was honored at the State Department in Washington on Tuesday as the U.S. issued its annual report on human trafficking around the world. Becky Palmstrom and Shannon Service for NPR hide caption

The State Department on Tuesday cited abuses in Thailand's huge fishing industry as part of an annual worldwide report on Trafficking in Persons. The report noted that men from Cambodia and Myanmar, also known as Burma, are trafficked aboard Thai ships and forced to work against their will. They include men like Vannak Prum, a Cambodian who spent three years on such a boat. Prum was among those honored at the State Department on Tuesday.

In the second of two stories, we pick up Prum's tale when he was aboard the Thai boat.

"At first the soldiers didn't want to fire on us," Prum says. "But the captain wouldn't stop."

The patrol fired and, when that failed, they lobbed Molotov cocktails onboard. The vessel caught fire, and Prum — a former soldier — braved gunfire to put it out. The Burmese and Cambodian workers begged their Thai captain to stop, but he wouldn't. The boat had stolen fish and kidnapped crew onboard.

With very little oversight or regulation, rogue Thai captains buy crew members from human traffickers and use them to plunder the fishing grounds of surrounding nations. If the workers disobey or slack off, they're beaten with stingray tails, tire irons, engine belts and, in one case, a sword.

The director of the U.S. State Department's Office to Monitor and Combat Trafficking in Persons, Ambassador Luis CdeBaca, calls it "a perfect storm of slavery and environmental degradation."

Rogue captains with an imprisoned crew are less likely to worry about fishing quotas, and trawl foreign waters, driving fish numbers down.

"Without a coordinated effort by governments in the region," says CdeBaca, "the slavery of foreign migrants in East Asian waters is going to contribute to an impending food security crisis. And that's something we're very concerned about."

The Indonesian navy chased Prum's boat for 10 hours, but turned back at Malaysia's boundary waters. The captain had escaped, but the boat was a smoldering shell.

"The fire-gutted boat was sent back to Thailand for repairs," says Prum. "I was transferred to another fishing boat."

Transferring men from boat to boat at sea is part of the system that keeps men on the ocean for months, or even years.

The other part is a system of shuttle boats, or mother ships, that bring ice, fuel and supplies out to fishing boats and haul back the catch from the fishing boat. The resulting ecosystem is so complete that one captive was kept at sea for nearly a decade.

Prum's captain decided to renew the boat's Malaysian fishing license so they could trawl the waters off the coast of Borneo without the threat of gunfire. This meant he needed to bring the boat close to shore.

"I had planned to escape for a long time," Prum says, "but I couldn't go anywhere in the middle of the ocean."

As soon as he saw land, Prum and another fisherman grabbed some empty plastic jugs to help them float. Then, around midnight, they plunged into the South China Sea. Prum was free for the first time in three years. 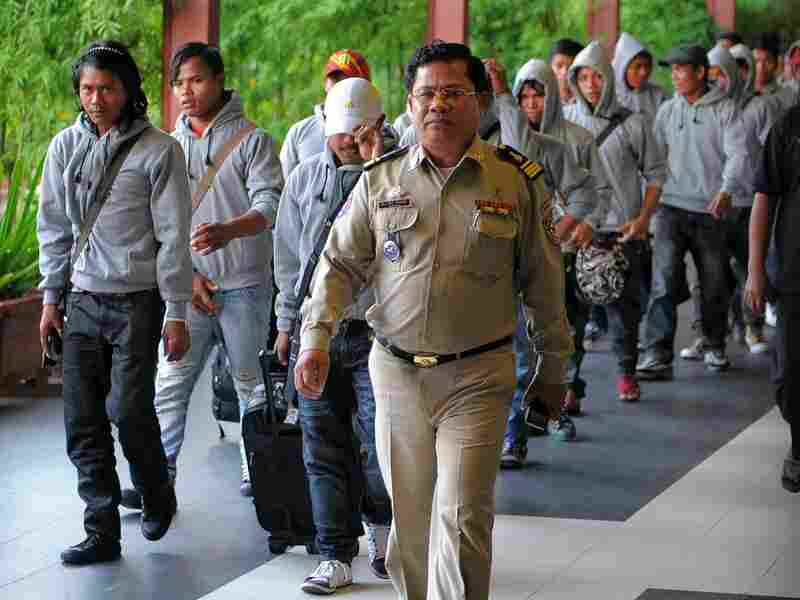 A Cambodian policeman escorts 30 fishermen returning home after being freed or escaping from slave-like conditions on Thai fishing vessels. The men arrived at the Phnom Penh airport in December. Large numbers of men from Myanmar and Cambodia are trafficked onto Thai fishing boats and forced to work in brutal conditions. Tang Chhin Sothy/AFP/Getty Images hide caption 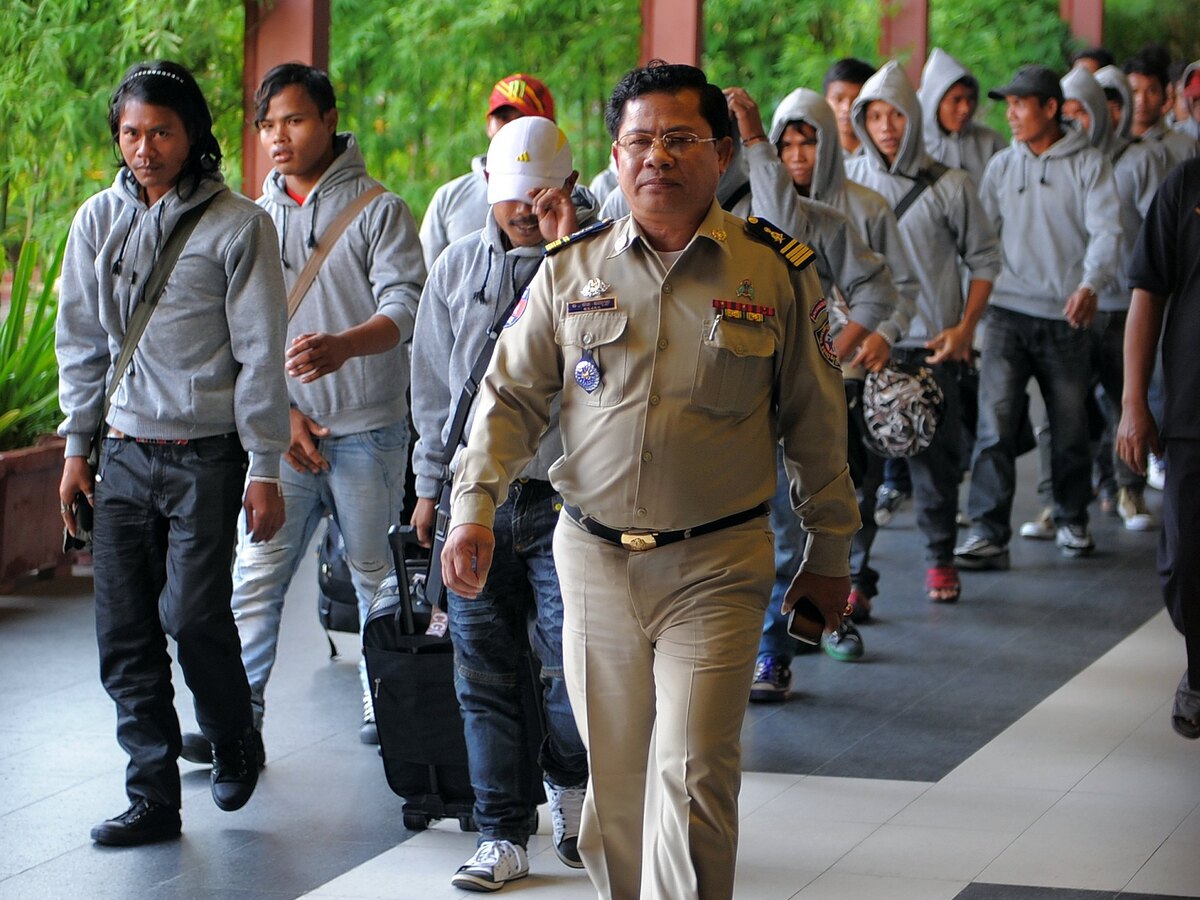 A Cambodian policeman escorts 30 fishermen returning home after being freed or escaping from slave-like conditions on Thai fishing vessels. The men arrived at the Phnom Penh airport in December. Large numbers of men from Myanmar and Cambodia are trafficked onto Thai fishing boats and forced to work in brutal conditions.

Men often escape off the coast of Tanjung Manis, Malaysia, because it's the port where captains get fishing permits.

A security worker at the port, who goes by the name Agent Azahar, says on average, he sees two men try to escape per month. They don't always make it.

"The scariest incident was when a man tried to escape and the boss came after him with a knife," he says. "The boss killed him — right in front of me."

Prosecutions of Thai captains are rare.

"We've seen a few cases investigated," says CdeBaca, "and one was prosecuted by the Malaysian authorities. But to date, we're not seeing an awful lot of results."

After Prum escaped, he hid out in the forest for the night and found a police station the next morning. He hoped he would be deported to his native Cambodia. But instead, the police picked up the phone. A man in a red car showed up, loaded Prum in, and took him to a palm oil plantation.

Then he was sold. Again.

Prum worked for over a year as an indentured servant before he was finally freed by a network of nongovernmental organizations.

Men like Prum are disappearing from villages in Cambodia and Myanmar, ending up on rogue Thai boats and then on plantations in both Malaysia and Indonesia. In the middle of it all is the Thai fleet.

"We see this as a regional problem," says CdeBaca. "It ends up having a destabilizing effect on the entire region."

But despite the scale of the problem, change is slow. Part of the reason is that the supply chain from Thai boats to the American plate is murky.

"Our companies certainly have no interest in sourcing from companies that use exploitative labor practices," says Gavin Gibbons of the National Fisheries Institute, or NFI. It is America's largest seafood trade company and represents giants like Wal-Mart and Chicken of the Sea.

"I don't think it's that American fish companies don't want to go back to the boat level," he says. "But what we've found is that the supply chain — even the regulators who are in a position to put regulations in place — are having real trouble with it, and the companies are having trouble with it as well."

CdeBaca says the supply chain isn't as murky as fish companies say, and he points to how quickly companies move to correct their chain when there's a health concern like food poisoning or salmonella.

"It's a matter of connecting the dots," he says, "and finding out who the abusive contractors, farmers or ship captains are."

But the dots can be difficult to connect.

Between the boat and the fish-processing factory are a number of obstacles.

The first is mother ships. Law-abiding boats use them, too — making it difficult to link a slave boat to its catch. The fish are again muddled together at the port before going to the larger processing and exporting companies that deal with American companies. 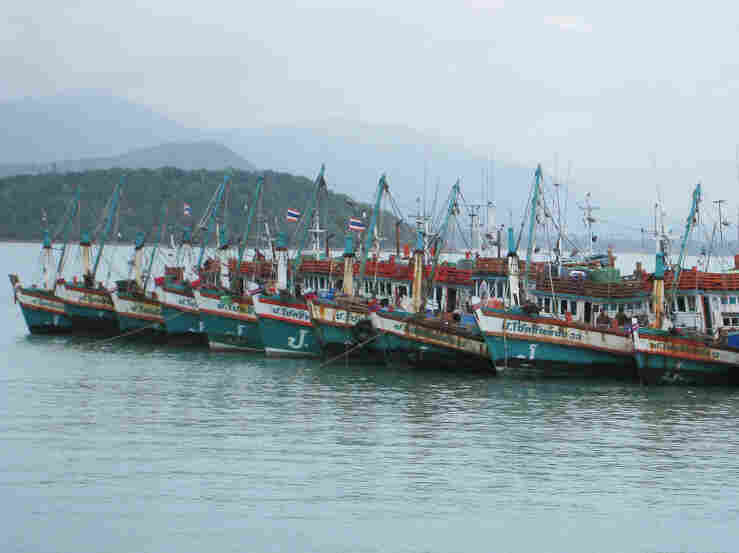 Thailand has a huge fishing fleet, but the industry is chronically short of fishermen. Human traffickers have recruited unsuspecting workers from Cambodia and Myanmar who end up spending months or even years at sea. Gareth Jones/Flickr hide caption 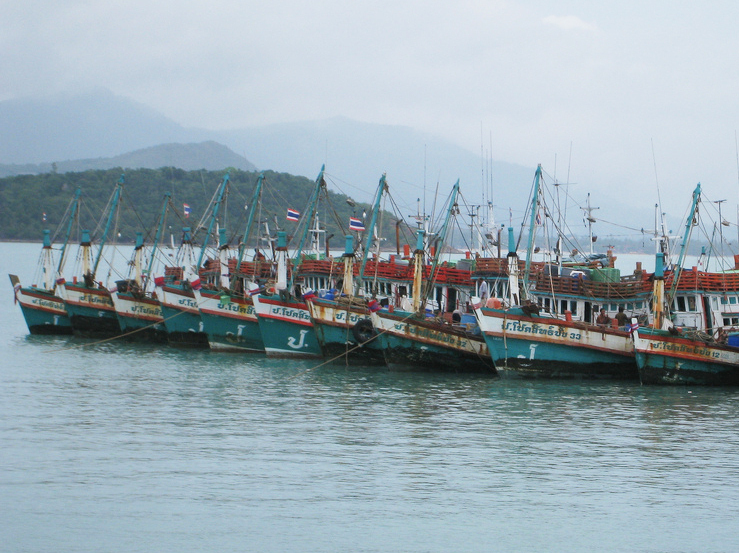 Thailand has a huge fishing fleet, but the industry is chronically short of fishermen. Human traffickers have recruited unsuspecting workers from Cambodia and Myanmar who end up spending months or even years at sea.

Thailand is not considered rigorous in tracking its fishing boats, so it's common for multiple boats to operate under the same license. And roughly 40 percent of Thai boats don't bother registering at all, creating a fleet of "ghost ships."

Once onboard, the men become shadows, too.

Thailand doesn't require captains to register their crew, so a boat might leave with 10 men, return with seven, and no one's the wiser. If anyone asks a crew member his name, he is told to recite a fake Thai name provided by the captain.

There is a Thai industry group that wants to register men and certify the boats that use fair labor practices. But it's too soon to tell if the National Fisheries Association of Thailand's plan will work. And, meanwhile, men like Prum are disappearing.

When Prum returned to Cambodia and settled into life as a father and farmer, he never thought he'd leave again. But a few days ago, he boarded a flight at the invitation of Ambassador CdeBaca.

The U.S. Office to Monitor and Combat Trafficking in Persons selected Prum as one of their 2012 trafficking heroes and brought him to Washington, D.C., to receive his award onstage. It was handed to him by Secretary of State Hillary Clinton on Tuesday afternoon at the State Department.

Several groups are helping ex-fishermen get back to their home countries and are supporting them once they get there. They include Tenaganita, Healthcare Center for Children, LSCW, the Labor Protection Network and LICADHO. The Made in a Free World app lets you ask brands about labor practices in their supply chain as you shop.

Research support for this series was provided by the Investigative Fund at The Nation Institute.