Accessibility links
A New Union Battle As Chicago Teachers, Mayor Clash Teachers in the country's third-largest school district have voted overwhelmingly to authorize a strike if the city and their union can't come to terms this summer. The vote is just the latest example of the gulf between teachers, Chicago school officials and Mayor Rahm Emanuel. 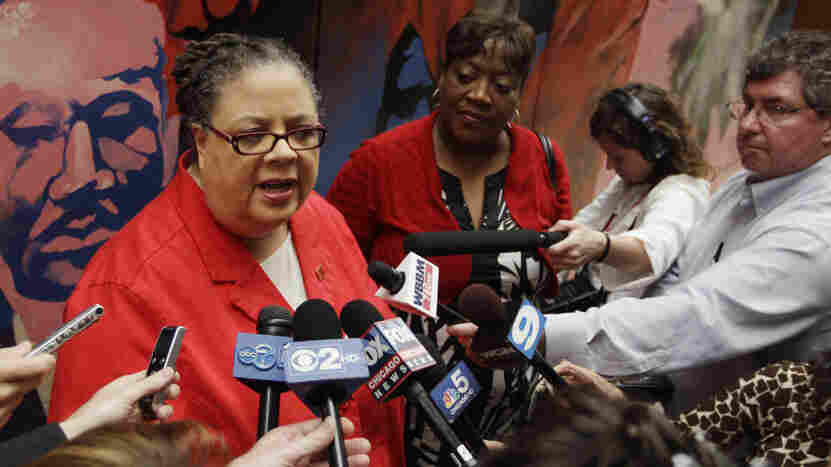 Chicago Teachers Union President Karen Lewis speaks to reporters after casting her ballot in a strike authorization vote. Teachers voted overwhelmingly to authorize the first strike in 25 years if the city and the union can't come to terms this summer. M. Spencer Green/AP hide caption

There hasn't been a school strike in Chicago for 25 years. But the current contract between Chicago teachers and the Chicago Public Schools expires at the end of next week, and tensions between the teachers union, the school district and Mayor Rahm Emanuel are ratcheting higher.

About 90 percent of CTU's membership — nearly 24,000 workers — voted this month to support a strike if one is called.

The dispute has prompted comparisons to Wisconsin, where a firestorm over collective bargaining ultimately resulted in a recall election there earlier this month.

CTU President Karen Lewis says the strong vote in Chicago is an indication of the rocky relationship between the union and the school board. It also demonstrates "the absolute abject lack of respect and scapegoating of teachers, paraprofessionals and clinicians throughout this country," she says.

"That's all we hear," Lewis says. "[That] everything that's wrong with the educational system is our fault."

In the past year, Emanuel stripped teachers of a 4 percent pay raise, and his effort to institute longer school days while sidestepping the union contract has infuriated union members.

A change in state law also angered teachers. Aimed at preventing a strike, the new law set the threshold for a strike authorization vote at 75 percent — and ruled that those members who don't vote would be considered "no" votes.

Michael Bochner, an art teacher at Cesar Chavez Elementary School, says that when teachers learned of the provision, they realized the law was a huge effort to blunt the union's power.

"So here at Chavez, we had 100 percent participation on the first day [of voting], which is much more than we've had for any election ever before," Bochner says.

Emanuel denies that his support for the change in the law backfired — but he did acknowledge last week that the strong 90 percent vote is a "huge number."

School district and union negotiators are wrangling over wages, class size and other issues. Even so, Emanuel offered a small olive branch last week as he talked about the wide gap in the two sides' proposals for teacher pay raises.

"They deserve it. They've earned it and appropriately have gotten it, and should get it in the future," Emanuel said. "What I want to make sure is our children also have a full day and full school year equal to their full potential, which has not been done to date."

Chicago Public Schools CEO Jean-Claude Brizard adds that no one in the city is looking to mirror Wisconsin, which grabbed the country's attention for months after Gov. Scott Walker introduced contentious changes curtailing the collective bargaining ability of most public-sector unions.

Robert Bruno, a labor professor at the University of Illinois, Chicago, says that while both the union and school board can draw lessons from the Wisconsin saga, Emanuel — former chief of staff to President Obama — may have another question to consider.

"How exactly does it look to have a major collective-bargaining dispute — a strike of public-sector workers — in his home city, on the eve of a tight presidential election with battleground states all around Illinois?" Bruno asks.

It may not come to that. Both the union and the school board say they're looking for common ground as the negotiations continue. And, says CTU's Karen Lewis, that 90 percent strike authorization vote is making those negotiations just a little bit easier.