Accessibility links
340 Tons Of Art To Rock L.A. The Los Angeles County Museum of Art is about to unveil its newest installation — a 340-ton boulder that visitors will be able to walk right under. It's called Levitated Mass, and it's taken a custom hauling job, about $10 million and more than 40 years to get it where it is today. 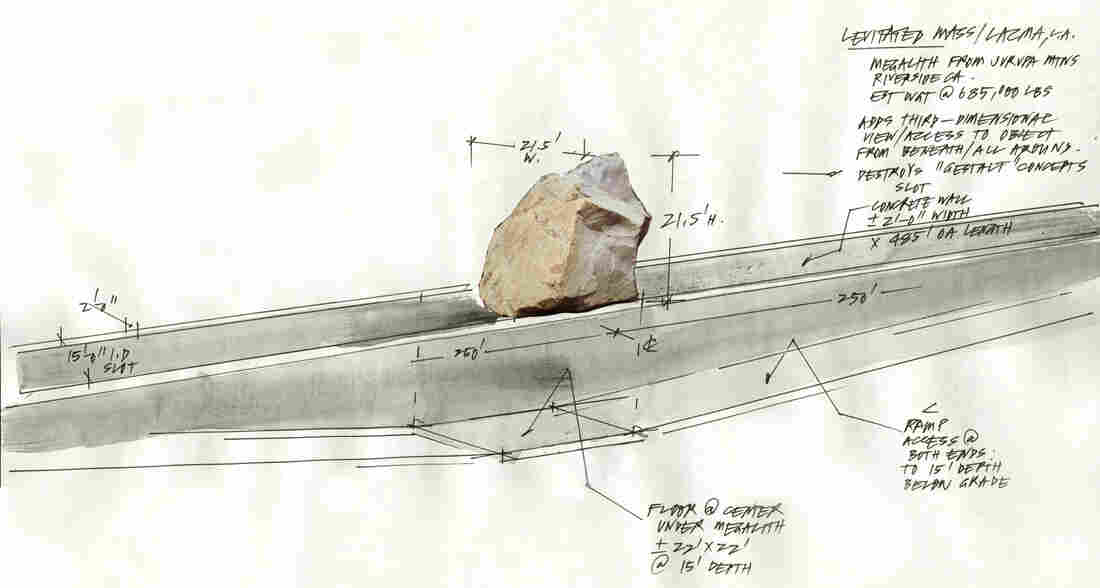 A 2011 sketch by artist Michael Heizer shows the walkway visitors will use to pass under the granite boulder at the center of the Los Angeles County Museum of Art's installation. (Click here to enlarge.) Courtesy of Michael Heizer hide caption

Los Angeles has a new rock star — a 340-ton boulder perched above a long walk-through trench at the Los Angeles County Museum of Art. The installation, called Levitated Mass, is a new work by artist Michael Heizer that opens to the public on June 24.

Workers began digging the installation's trench in the parkland outside the museum more than a year ago. Back then, museum Director Michael Govan could visualize just how the finished piece would look once the enormous boulder arrived. "You'll be able to walk down under it," he said. "And as you walk down under it, that rock bottom moves up and you will feel the sense of a huge monolith that's kind of levitated. It's magic." 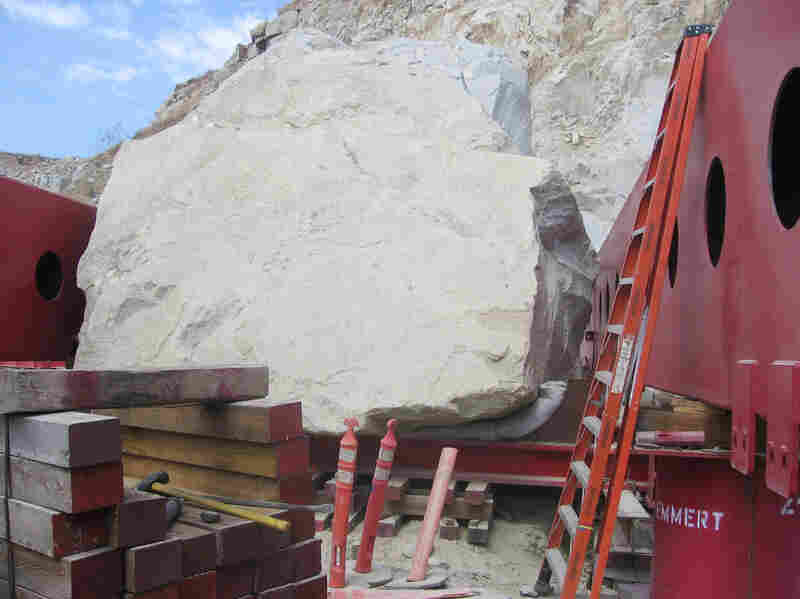 Artist Michael Heizer's handpicked boulder, and its custom-made transporter, sat at the Stone Valley Quarry for months while the moving team acquired permits to haul it through four counties and 22 cities en route to L.A. Ina Jaffe/NPR hide caption 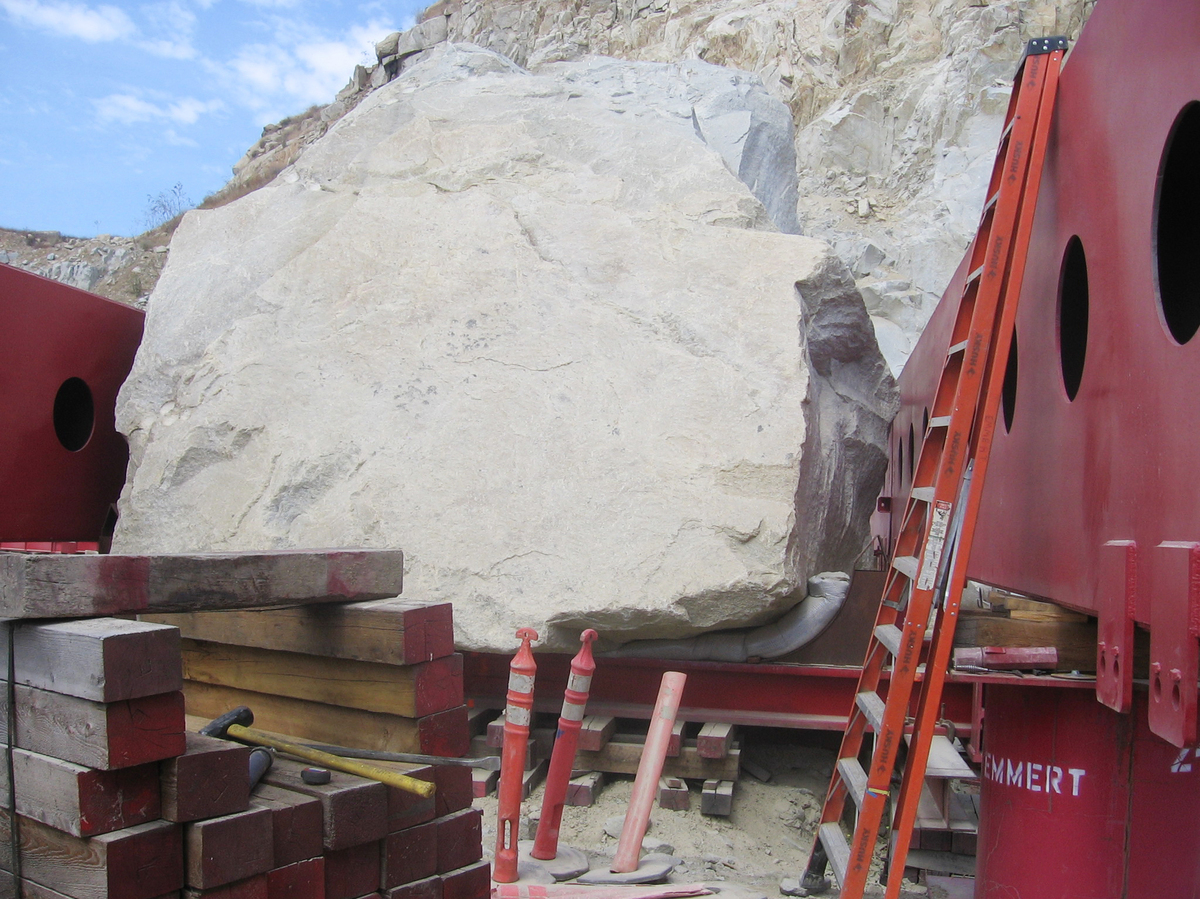 Artist Michael Heizer's handpicked boulder, and its custom-made transporter, sat at the Stone Valley Quarry for months while the moving team acquired permits to haul it through four counties and 22 cities en route to L.A.

How To Haul A Boulder To L.A.

At the time, the big rock was waiting at Stone Valley Quarry about 60 miles east of L.A. That's where workers from Emmert International, the company charged with managing the boulder's transportation, assembled the vehicle that would carry it to the museum. Moving the rock involved stringing it up on cables between two long pieces of red steel to evenly distribute its weight.

Rick Albrecht, who oversaw the job for Emmert, said his company had a lot of experience when it came to hauling big things around: "This might be the first time for a rock, but we just moved a building in Salt Lake City that was brick and had old, cheap mortar in it. It held together."

Once Emmert's boulder-hauling vehicle was finished, it measured roughly 300 feet long and had 22 axles and about 200 tires. Albrecht anticipated it would chug along at about 5 miles an hour, only on city streets and only at night, with a crew of 12 and police escorts. But then, nothing happened. It turned out permits to move a rock of this size through the four counties and 22 cities en route to the museum were harder to come by than expected.

For months, the rock and its transporter sat at the quarry. Finally, at the end of February, the boulder began its 11-day journey. Wherever it stopped, people turned the occasion into a spontaneous street party. Dallas Williams couldn't pass up the opportunity to check the rock out when it stopped in Long Beach, just south of L.A. 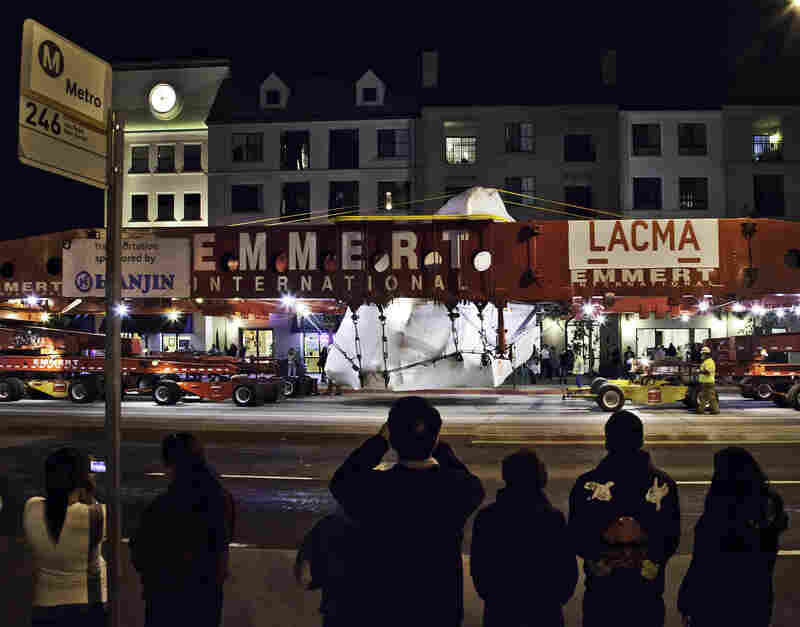 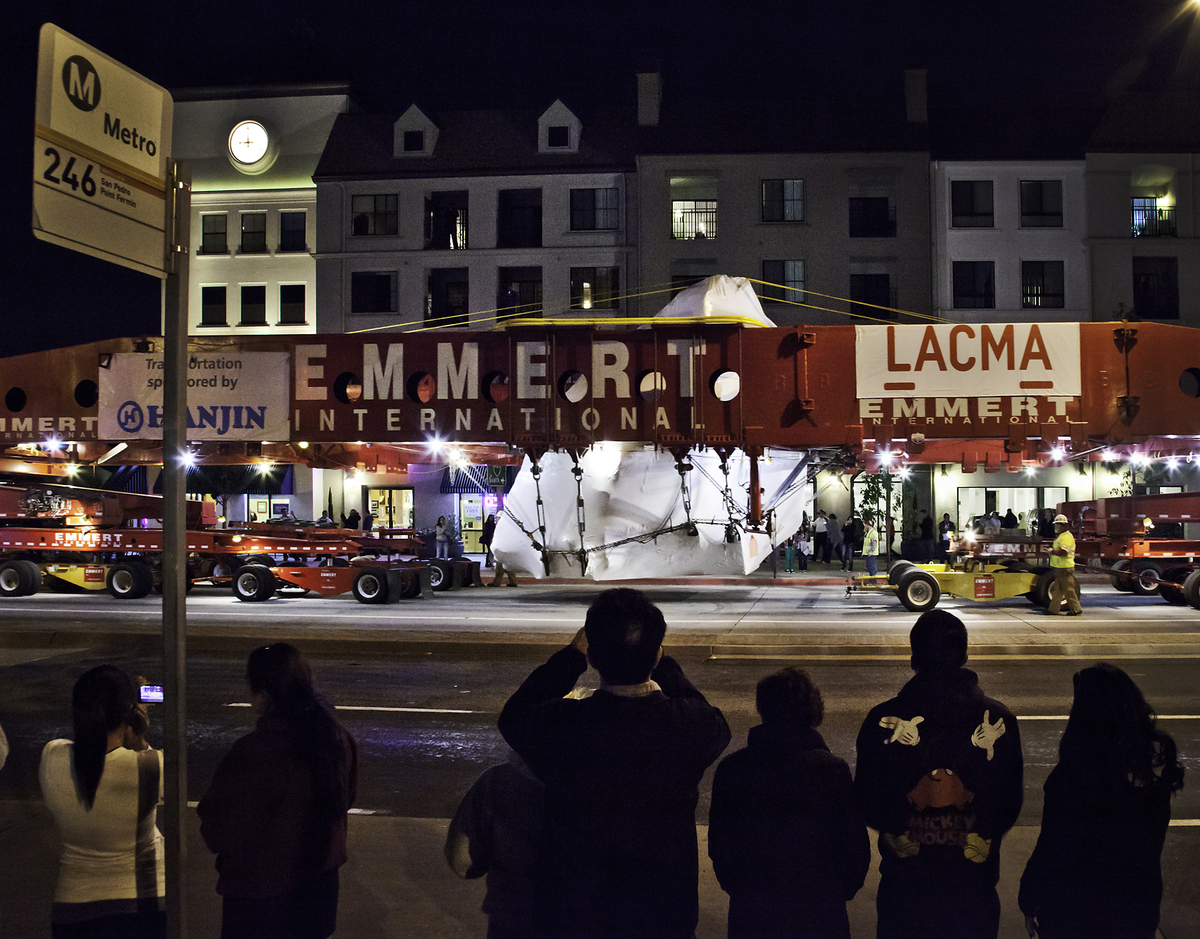 Artist Michael Heizer's megalith finally arrived at the Los Angeles County Museum of Art on March 10. It took years for Heizer to find the perfect rock.

Decades In The Making

It may have taken months to transport the rock to the museum, but that's nothing compared with how long it took artist Michael Heizer to find the right rock. Heizer first sketched the project in the 1960s, but it wasn't until 2005, when a routine blast at Stone Valley Quarry finally produced the boulder he'd imagined, that the project started coming together. Then, Heizer had to find the right patrons. The museum funded Levitated Mass with about $10 million in private donations.

In his trailer on the museum grounds, Heizer shuffles through geologists' renderings of the boulder. "What's interesting about this rock is it's not just a piece of quarry fragment, blown-up junk," he says. "This doesn't have really any fractures on it at all. This is actually a specimen. This is a geologic specimen."

Heizer prefers to limit the conversation to the rock itself, perhaps to avoid answering questions like, "Why is this art?" The 67-year-old has no patience for that kind of talk. He makes what is known as land art; his masterwork is a mile-and-a-half-long collection of mounds, berms and depressions called City in the Nevada desert near his home. He began working on it in the '70s and won't be done for a few more years. Until then, no visitors are allowed.

But Levitated Mass won't be so isolated. Museum Director Govan says it will be in the heart of the city. "In fact, the work will be freely accessible from the park," he says. "You won't even need an admissions ticket."

Boulder Gathers No Moss On Its Way To Los Angeles March 7, 2012