Accessibility links
Bishops Launch 2-Week Campaign Against Health Law The effort, dubbed "Fortnight for Freedom," will involve praying, fasting and rallies against what the Catholic bishops call an assault on religious freedom by the Obama administration. But parishioners worry that the movement is splitting the church. 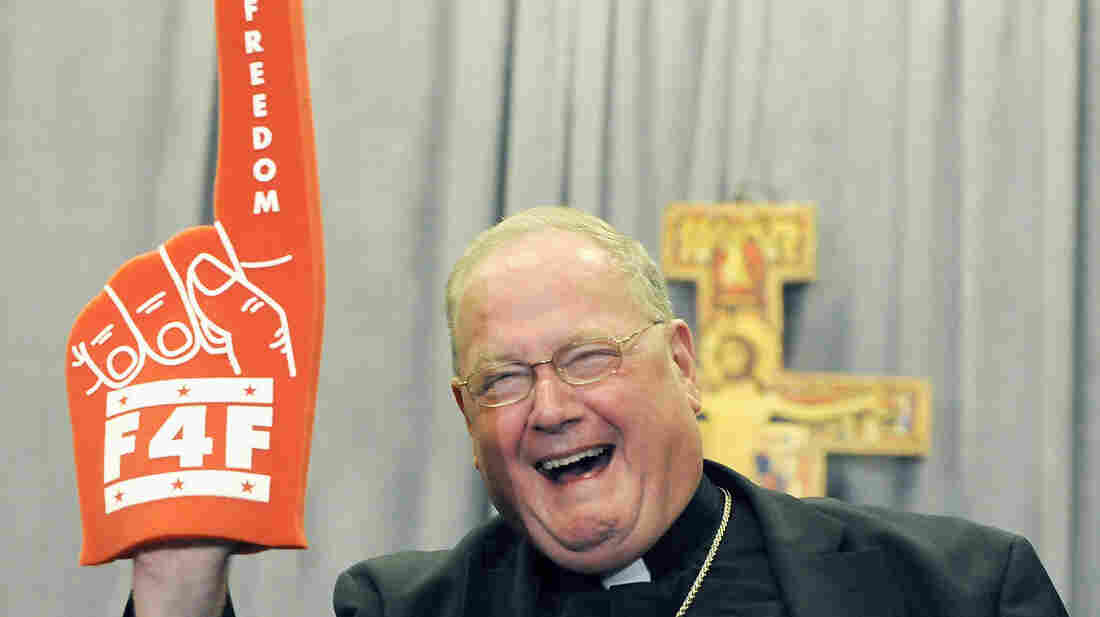 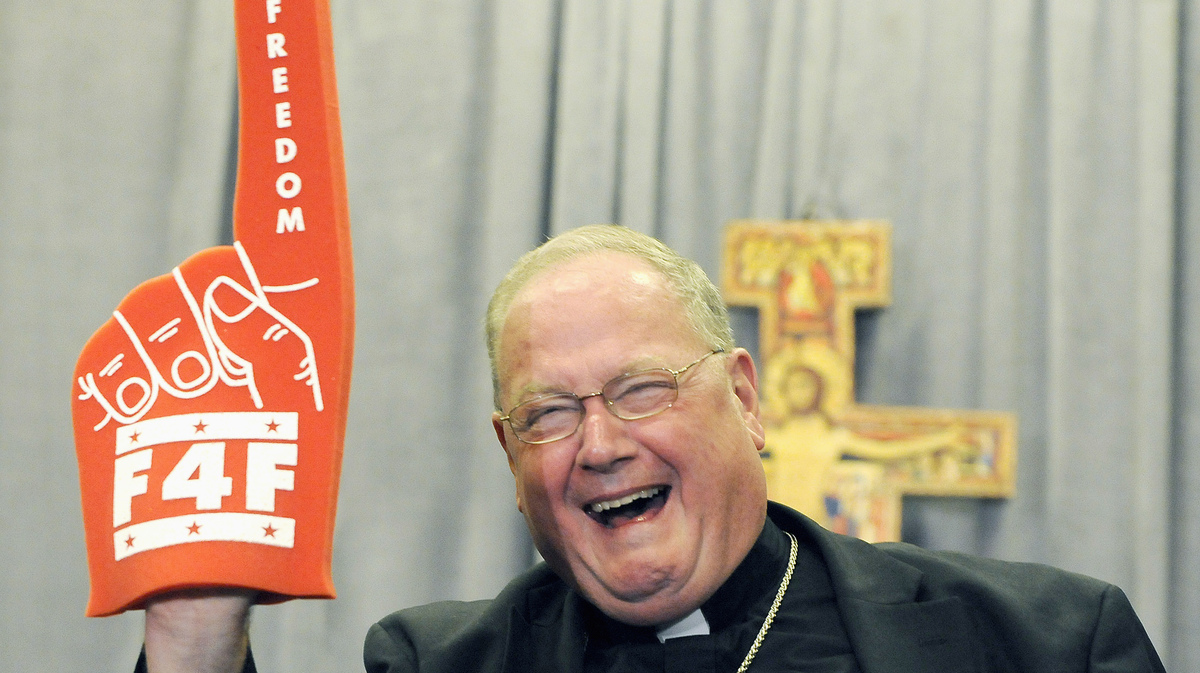 The U.S. Conference of Catholic Bishops launches what it's calling the "Fortnight for Freedom" on Thursday — two weeks of praying and fasting because the bishops believe the church's religious freedom is being threatened by the Obama administration's health care policies.

"This is the first time that I've felt personally attacked by my government," parishioner Kathleen Burke says after a service at Our Lady of Lourdes Catholic Church in Bethesda, Md.

Another parishioner, Tom Shuler, says the government has always made exceptions for religious organizations to adhere to their beliefs, until now.

"The Obama administration and all of the accompanying executives there are clearly anti-religious," Shuler says.

His wife, Jamie, is delighted the bishops are fighting back. "Obama has brought this on himself," she says. "If he doesn't want to play with fire, then don't light the match."

The Fortnight for Freedom campaign, which runs through July 4, includes special Masses and sermons devoted to the theme. Radio spots and videos produced by the bishops conference accuse the Obama administration of taking "the first step to deny religious liberty."

Archbishop William Lori of Baltimore, who is heading the campaign, says the bishops have a simple goal. "We're trying to protect our institutions and our fundamental freedoms as individuals," he says, "and so this seemed to be the moment that we have to draw the line in the sand." 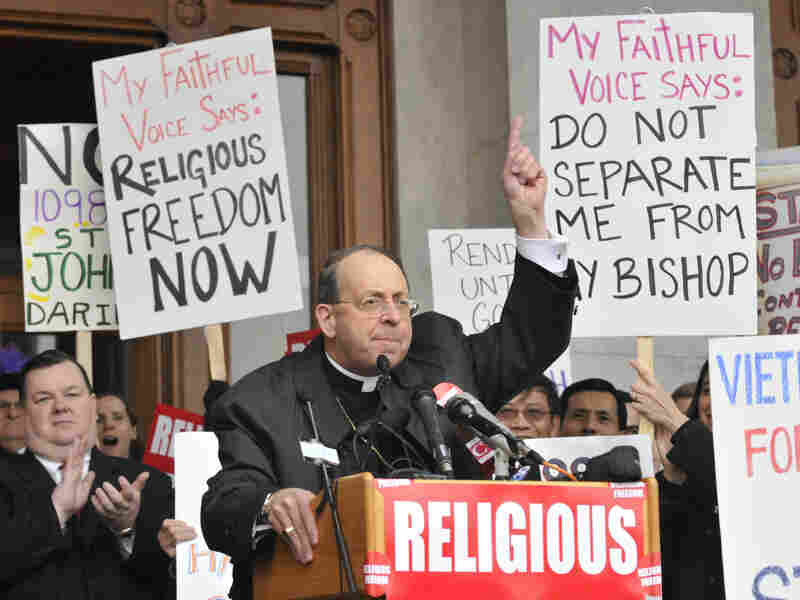 Archbishop William Lori of Baltimore, shown speaking at the state Capitol in Hartford, Conn., in 2009, is the head of the U.S. bishops' Fortnight for Freedom campaign. Jessica Hill/AP hide caption 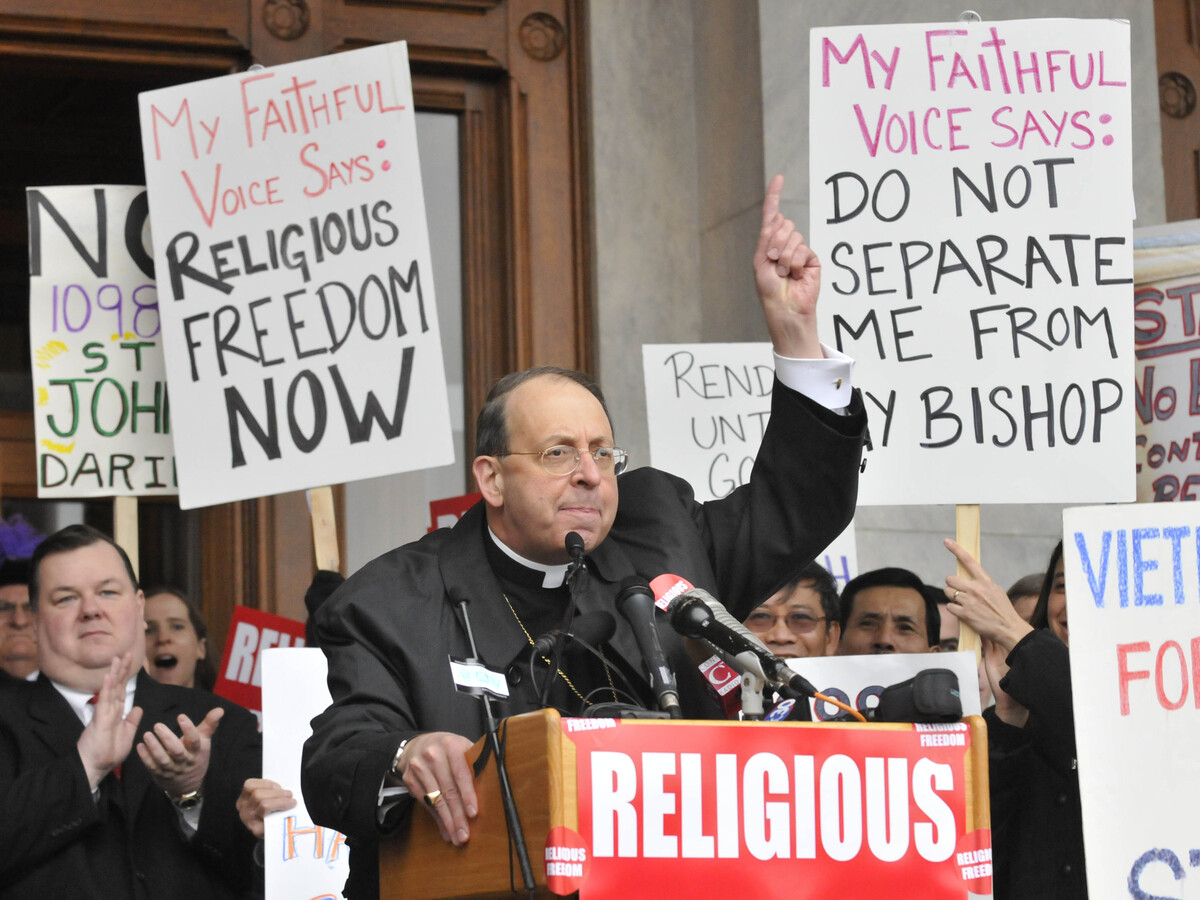 Archbishop William Lori of Baltimore, shown speaking at the state Capitol in Hartford, Conn., in 2009, is the head of the U.S. bishops' Fortnight for Freedom campaign.

The rhetoric is pretty strong. Cardinal Timothy Dolan of New York, who leads the bishops conference, says the White House is "strangling" the church. The bishop of Oakland warns of "despotism." And then there was an April sermon by the bishop of Peoria, Ill., Daniel Jenky.

"Hitler and Stalin, at their better moments, would just barely tolerate some churches remaining open," Jenky says in the video, adding that the dictators would not allow the church to compete in education, social services or health care.

"President Obama with his radical pro-abortion and extreme secularist agenda now seems intent on following a similar path," he says.

"Sometimes prophets are thought to be unduly alarmist, and sometimes their speech is a little bit strong," the archbishop says. "But that's what prophetic speech always has been."

He contends Catholics are fully behind the campaign, dismissing a poll by the Public Religion Research Institute that found 57 percent of Catholics are not worried about their religious liberties.

A Plea For Nonpartisan Preaching

Marion McCartney, who attends the Shrine of the Most Blessed Sacrament in Washington, D.C., opposes the bishops' campaign. She's part of a group, Blessed Sacrament Families United in Faith and Action, that wrote a letter to its pastor, saying the partisan nature of the campaign is "a step too far."

"Nobody's religious freedom is at stake. That's just ridiculous!" McCartney says. Is "[Health and Human Services Secretary] Kathleen Sebelius going to come and close all the church doors? I mean, it's just foolishness."

Another member of that group is Jim Zogby, who has worked on human-rights issues overseas. He says the U.S. bishops were spoiling for a fight over social issues with the Obama administration.

"They declared war on the administration, and we the faithful are paying the price for it," Zogby says. "Our religious freedom, our ability to simply go to church, worship, feel a community, feel safe in that community" has been compromised.

"We're now being put in the middle of a partisan fight, and that's wrong."

His wife, Eileen, says Blessed Sacrament, with its mix of liberals and conservatives, has always put politics aside. Not now. At a recent parish meeting about religious freedom, people began attacking President Obama, she says, getting more and more heated.

Marion McCartney, parishioner at the Shrine of the Most Blessed Sacrament in Washington, D.C.

"Until finally one person leaned forward and he said, 'Well, I have seen cars in our parking lot with Obama stickers on them, and they are complicit in all of this.' And I thought, 'Well I guess I'm not welcome here, because I have an Obama sticker on my car.' "

University of Notre Dame historian Scott Appleby says the bishops have lost credibility with many Catholics. There is a valid concern about the health care law, he says, but many Catholics aren't listening because they're unhappy about the sex abuse crisis and the Vatican's investigation of nuns in the U.S.

"Many Catholics are thinking, 'Well there they go again,' " Appleby says. "That's unfair in this situation, but it's understandable because the bishops have been perceived to have made one wrong turn after another for at least the last decade."

Some Catholics are also uncomfortable with the timing of the Fortnight for Freedom campaign, coming just a few months before a presidential election. Lori says the White House started it.

"We did not go looking for a fight in an election year," he says. "It was handed to us."

The archbishop adds that if they don't act now, it will be too late.