Accessibility links
Movie Review - 'The Last Ride' - Hank Williams Takes A Back Seat In Bio-Pic In this recap of Hank Williams' final days, the famed country singer (Henry Thomas) is mysteriously sidelined from the main plot in favor of his young chauffeur (Jesse James). Critic Andrew Lapin says the film features some subtle writing, but makes a poor introduction to its nominal subject.

Hank Williams Takes A Back Seat In 'The Last Ride'

Hank Williams Takes A Back Seat In 'The Last Ride' 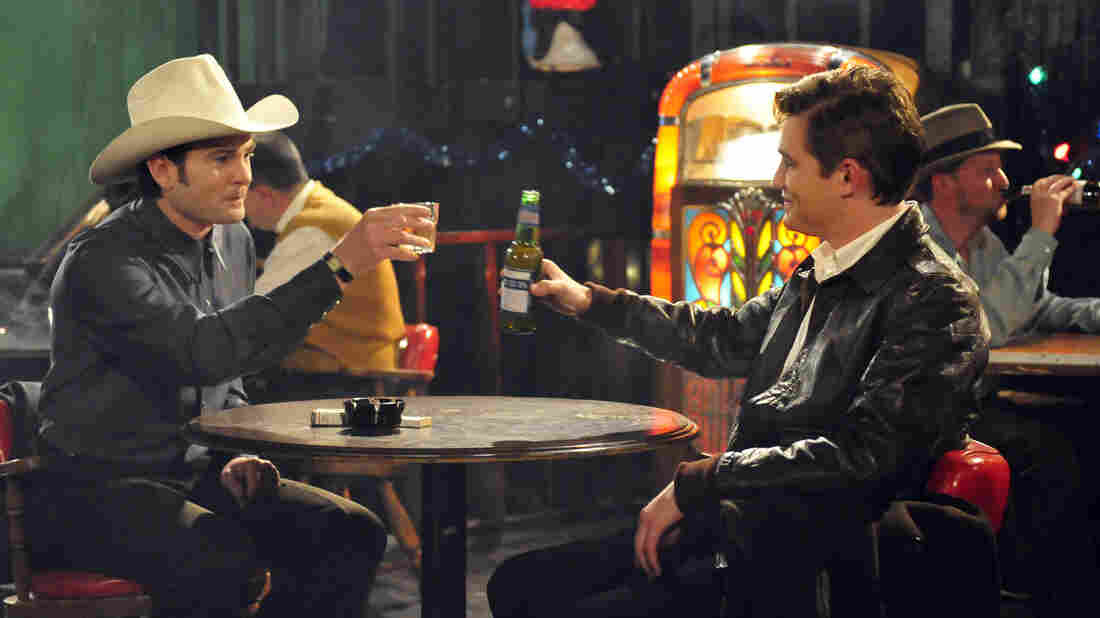 In The Last Ride, Silas (Jesse James, right) is hired to drive Hank Williams (Henry Thomas) to his New Year's gigs and must learn to stand up to the country singer's hectoring behavior. Melody Gaither/Mozark Productions hide caption

Rated PG-13 for thematic elements, some language, a fight and smoking

The Last Ride recounts the final days of country-music legend Hank Williams, but it's strangely short on actual information about the singer. We only sparingly hear snippets of his music on the radio, and we learn almost nothing of his past. In fact, no one ever refers to the man by his proper name.

It's an odd approach to a true-ish story about one of the most influential musicians of all time, a man who's still a big enough draw to receive prime soundtrack placement on this year's Moonrise Kingdom. The music biopic is a genre notorious for bombastic cradle-to-grave immortalization. But The Last Ride bets its stake on the perspective of someone who drifts only briefly into Williams' story — a kid who doesn't listen to music, doesn't own a radio and has no clue who this drunk is.

Silas (Jesse James) is a shy, unmotivated mechanic hired on a whim in 1952 to chauffeur "Mr. Wells" — the star's actual, real-life traveling pseudonym — in his fancy Cadillac from Montgomery, Ala., to New Year's gigs in West Virginia and Ohio. Williams/Wells is played, head lolling, by Henry Thomas, who once took a somewhat more exotic back-seat ride as Elliott in E.T.: The Extra-Terrestrial.

We know Wells won't get out of this world alive: He's only 29, but talks like an old, weary man. He also coughs a lot; in movie language, this guy is obviously doomed, even if history hadn't already dictated his imminent demise from heart failure.

But what actually happened to him on that journey? Not a whole lot, apparently. He drinks, meets with various "doctors," drinks, gets into a bar fight and drinks some more. When he pulls his head up enough to reflect on hinted-at bygone poor career choices, he's a down-home Nietzsche: "Not a damn bit of it matters for nothin'."

None of this is a bad thing, necessarily. It may lack in information, but the script, by Howard Klausner and Dub Cornett, is often impressively subtle, as in a moment where Wells gazes broodingly at a couple of young boys drinking and smoking on the side of the road, about to begin their own needlessly painful life of vice.

Director Harry Thomason takes a bite-size rather than life-size approach, with long takes centered on the singer's face. There are suggestions of Gus Van Sant's minimalist almost-Kurt-Cobain chronicle Last Days. But the filmmakers shift their story from stately void-gazing toward more pedestrian themes about sticking up for yourself.

Wells, you see, eventually reveals his inner schoolyard bully, barking at Silas to drive recklessly and take undue risks — so the film's central dilemma becomes whether Silas will learn how to stand up to that mean ol' drunk in the back seat. When Silas gains a late-game love interest (Kaley Cuoco from CBS's The Big Bang Theory), even their courtship seems like an artificial device, as though the film will do anything to avoid dwelling on Wells himself for too long. 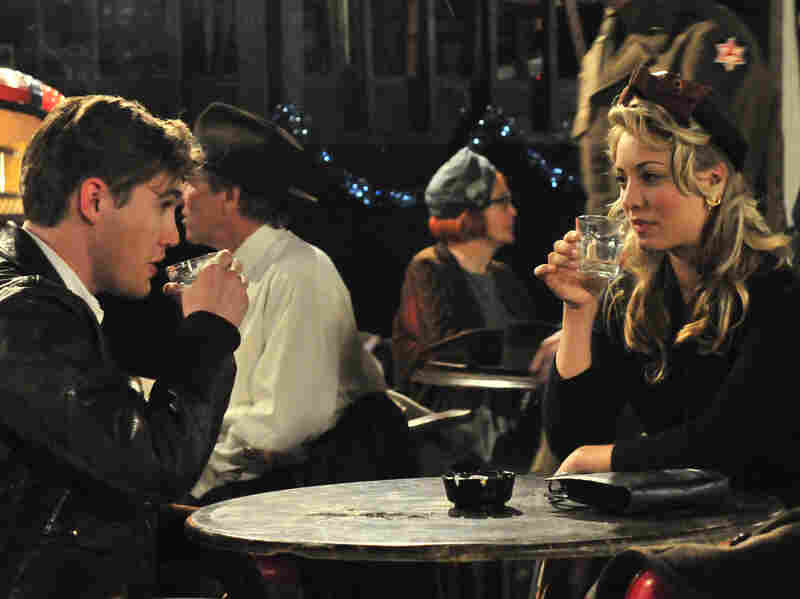 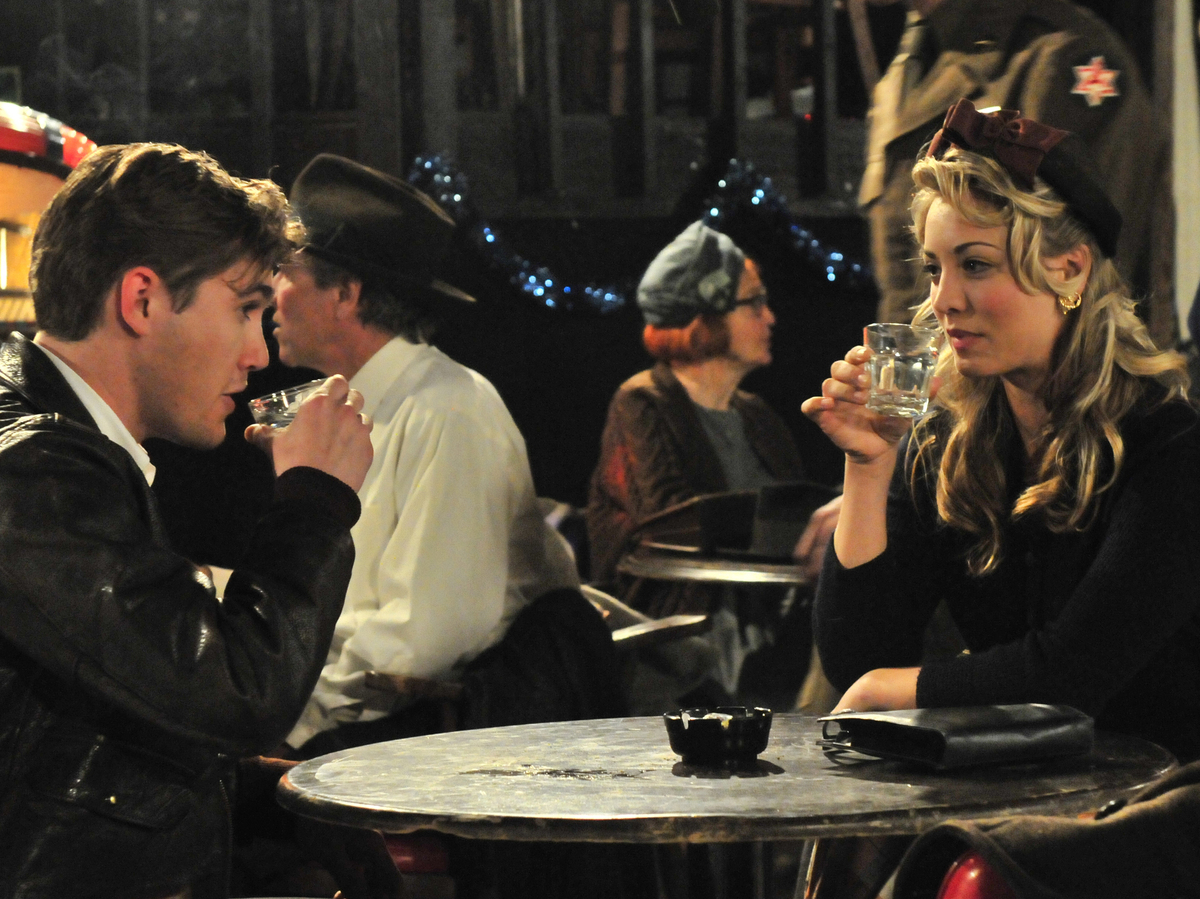 Silas has a drink with Wanda (Kaley Cuoco). The late-game love story shifts the movie's attention further away from its presumed subject, Hank Williams.

One would be forgiven for thinking that such tiptoeing might be deliberate, perhaps the result of a legal dispute, but that's not the case here: The Williams estate was fully behind the project, and there were no rights issues with his likeness or songs. The decision to preserve him in celluloid as an anonymous, whiskey-swilling fatalist who fades into the background of his own final days was a purely creative one.

Was it the right call? As with Mr. Wells' Cadillac, your mileage may vary. But it means the film can't really function as a proper meditation on its subject — because he's not really its subject.

The Last Ride concludes with Johnny Cash singing "The Night Hank Williams Came To Town" over the end credits, a music selection that's so perfect it actually hurts the film. Cash's classic paints a broad and enticing picture of the sheer scope of his idol's onetime influence — "A thousand people sweltered in the gym / Then I heard someone whisper, 'Hey, that's him.' " He's singing about a man with a pen and a voice capable of enthralling millions.

Hearing that at the end of this movie, we think: Must've been a different Hank Williams.