Accessibility links
Movie Review - 'Brave' - A Pixar Princess At Odds With Her Place Pixar tries to solve its female-heroine problem with a movie about Merida, a rebellious princess who, to her mother's dismay, craves freedom from all men. Critic Scott Tobias says the film's powerful character and message are unfortunately surrounded by uninspired plotting and comic relief.

In 'Brave,' A Pixar Princess At Odds With Her Place

In 'Brave,' A Pixar Princess At Odds With Her Place 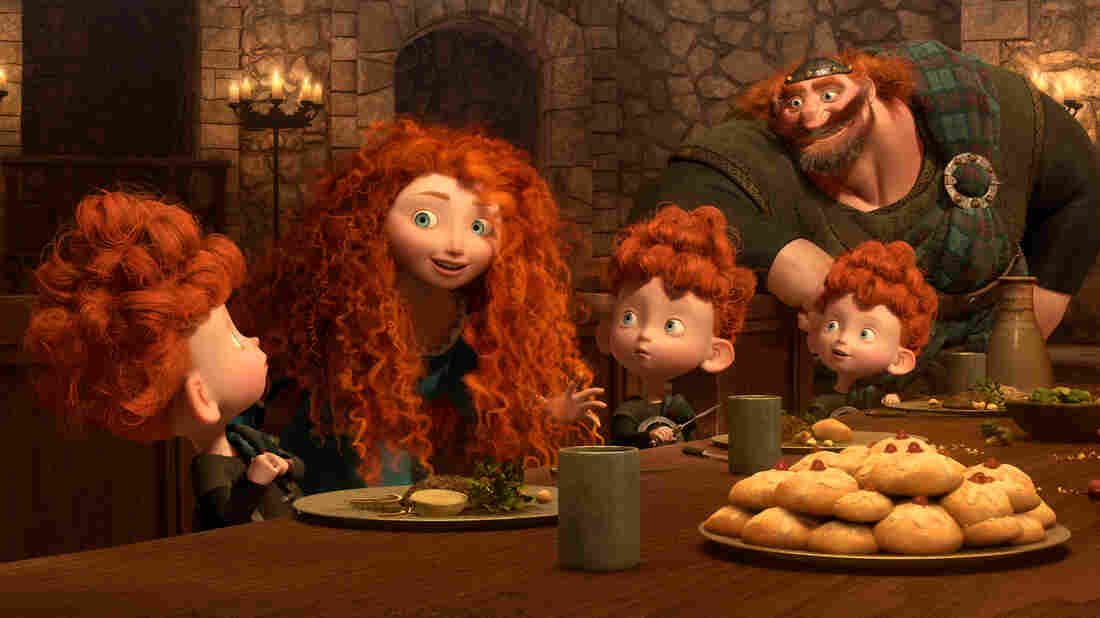 Merida, the heroine in Pixar's Brave, causes much family drama by refusing to get married — and acting more like her father, King Fergus, than a "proper princess." Disney/Pixar hide caption

Rated PG for some scary action and rude humor

Not since Walt Disney's heyday has an animation company enjoyed a creative — and technically innovative — run like Pixar, now on a two-decade stretch that started with Toy Story in 1995 and continued with modern classics like Finding Nemo, Monsters Inc., The Incredibles, WALL-E, Ratatouille and two Toy Story sequels that took on improbable depth and complexity. Over the years, the only persistent knock against Pixar is its lack of one thing Disney movies had in spades: female heroines.

With the vibrant Scottish adventure Brave, the company sets about solving that political problem by offering a distinctly 21st-century princess — strong and rebellious, swift with a bow and uncompromising in her quest for self-determination. Yet they've also solved the problem the Pixar way, which means family comes first, whether it's the surrogate bonds of Cars and Toy Story or the close-knit units of Finding Nemo and The Incredibles. Everything that's good about Brave — beyond the expected eye candy, anyway — stems from the push and pull between the princess' ambition and the demands of family tradition. Pixar may specialize in reinventing genres and creating new worlds, but this theme draws from a vast emotional reserve.

But there's a lot that isn't good about Brave, too, or at least that's woefully conventional by Pixar standards. Beyond the strong core relationship between Merida (voiced by Kelly Macdonald), the film's frisky Celtic princess, and her equally iron-willed mother, Elinor (voiced by Emma Thompson), Brave creates a universe that's beautifully rendered yet thinly imagined, with rote mythology and a wealth of lowbrow gags. At its worst, it would be tempting to say that Pixar is playing on rival DreamWorks' turf — all one-liners and blocky character designs — if DreamWorks hadn't stepped up its game recently with Kung Fu Panda and How to Train Your Dragon.

With an unruly shock of red hair that makes a statement well before she opens her mouth, Merida has more in common with her father, King Fergus (voiced by Billy Connolly), a man of lusty appetites, than her mother, who asserts a quieter power that's rooted more in wisdom than in brute force. When Merida comes of age, Elinor surprises her with the news that suitors from three different clans will compete for her hand in marriage, an arrangement Merida rejects as thoroughly as her mother's lessons on proper etiquette.

Like many a fairy tale princess, Merida flees to an enchanted forest and comes upon a witch, but the spell she hopes will change her mother's mind has unintended consequences. Viewers are better off discovering what happens to Elinor for themselves; suffice it to say that Merida's mother will finally be forced to listen to her for once. 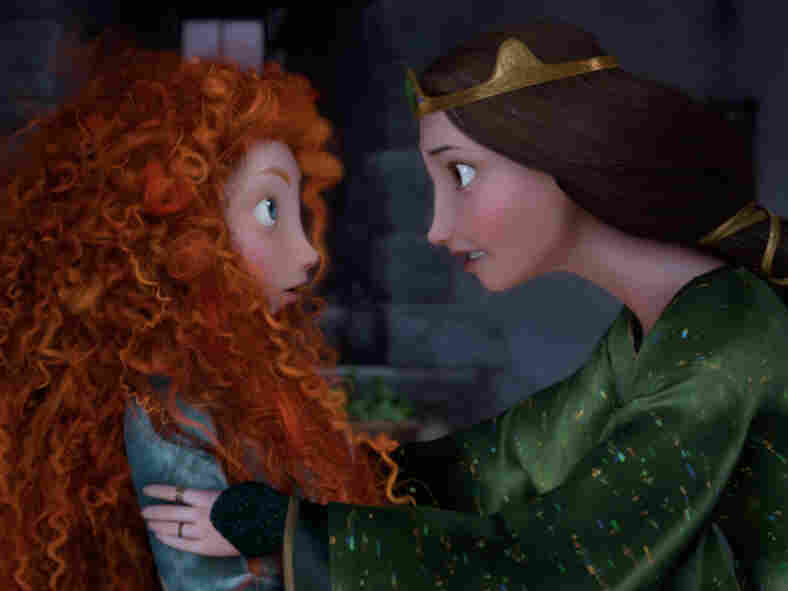 Merida and her mother, Queen Elinor, spar over their very different ideas about what most becomes a princess. Disney/Pixar hide caption 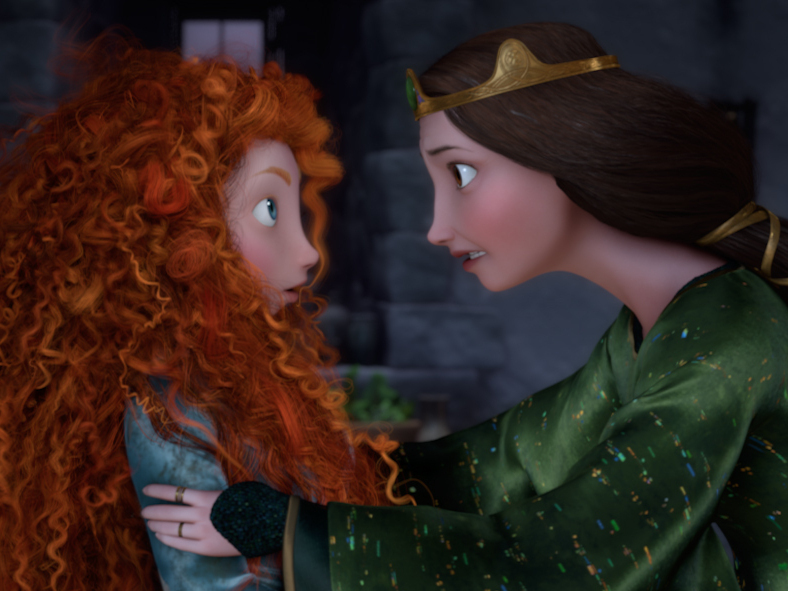 Merida and her mother, Queen Elinor, spar over their very different ideas about what most becomes a princess.

The mother-daughter scenes in Brave have a marvelous tension that turns from dramatic to deftly comic when the spell takes effect and transforms Elinor completely. And the issues between them are not trivial: Granting her daughter the freedom she craves — freedom from all men, not just princes — isn't a simple case of Elinor getting hip to changing times, but a threat to the tenuous peace between clans. For Merida, part of growing up is understanding that personal fulfillment isn't the only consideration, but something that has to be reconciled with the needs of those closest to you.

Brave hits on this powerful message eventually, but it gets there by way of run-of-the-mill plotting and strained attempts at comic relief, from the shenanigans of Merida's three trouble-making little brothers to the bungling oafs in the other clans. The future of Merida's kingdom depends on her family's sustaining a fragile relationship with their neighbors; turning the latter into lovable half-wits and blowhards lowers the stakes a little. While the character of Merida answers Pixar's cultural critics emphatically — and offers young girls a spirited wild card to add to their gallery of satin-gowned Disney princesses — the studio hasn't imagined a vehicle worthy of her.