Accessibility links
Will Your Children Inherit Your E-Books? An old copy of The War of the Worlds, once belonging to rocket scientist Robert Goddard, prompts essayist Amanda Katz to muse on what we lose when we stop reading — and passing along — physical books.

Will Your Children Inherit Your E-Books?

Will Your Children Inherit Your E-Books? 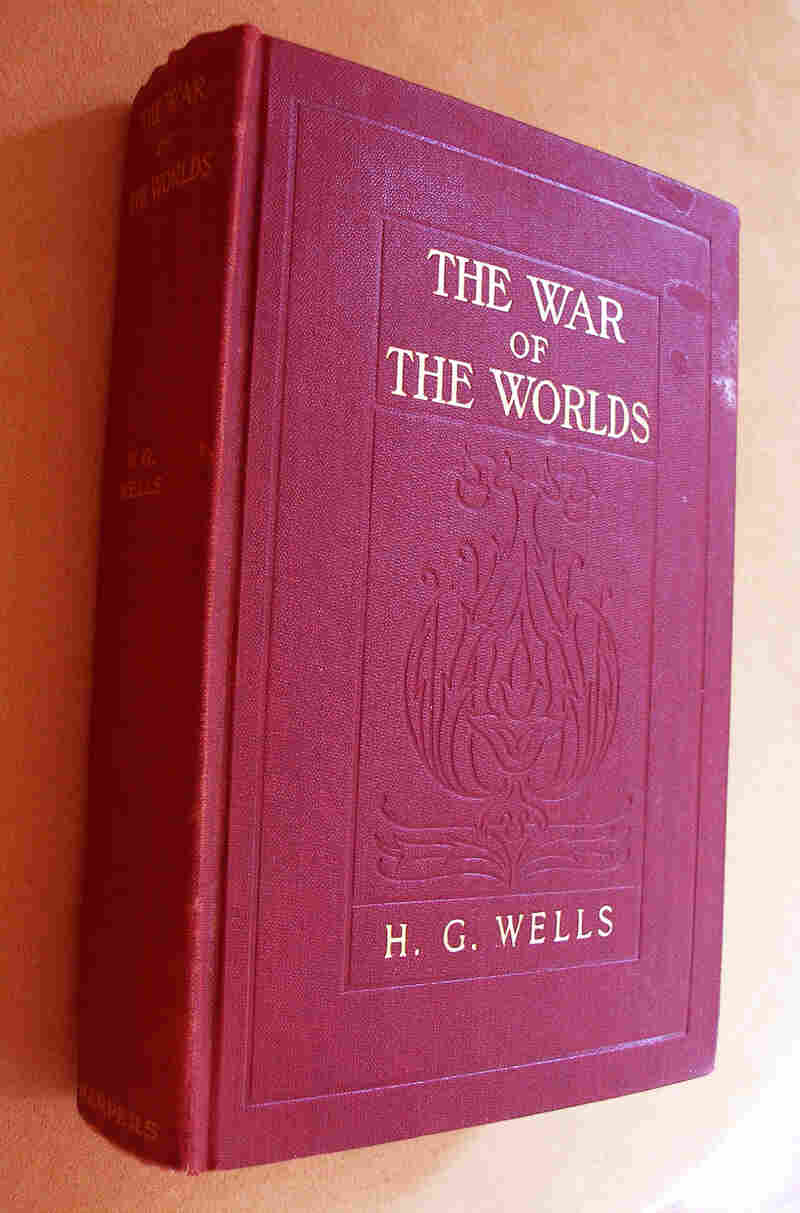 Rocket scientist Robert Goddard's Uncle Spud gave him this copy of The War of the Worlds in 1898. More than a hundred years later, it passed into the hands of essayist Amanda Katz. Amanda Katz hide caption 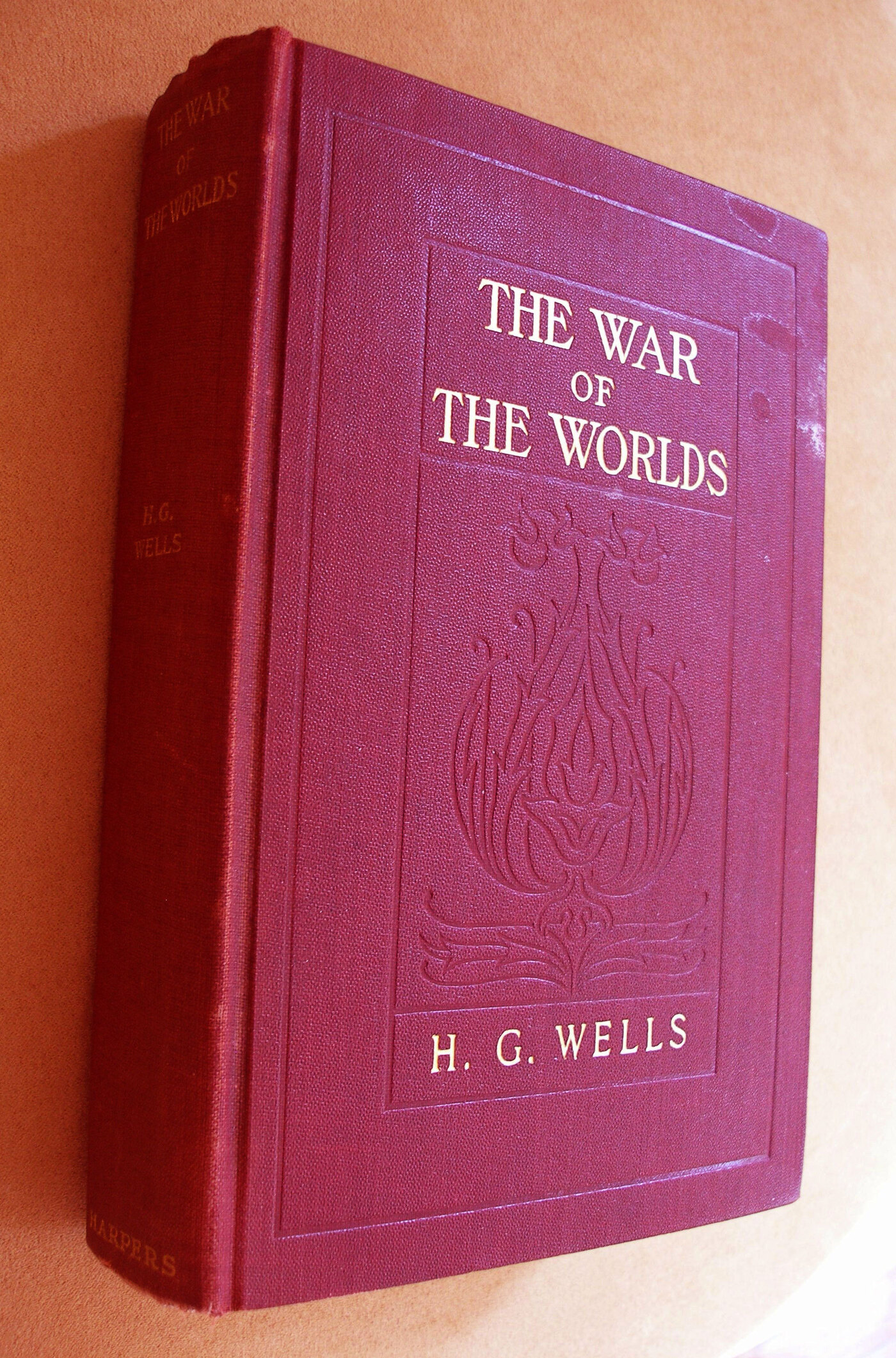 Rocket scientist Robert Goddard's Uncle Spud gave him this copy of The War of the Worlds in 1898. More than a hundred years later, it passed into the hands of essayist Amanda Katz.

The book: H.G. Wells' The War of the Worlds, then just out in America from Harper & Brothers. The ripping tale of a Martian attack that set the mold for them all, it's almost more striking to a reader today for its turn-of-the-century detail: carriage-horse accidents, urgent telegrams, news only via newspapers. Toward the end of the novel, the narrator gets ahold of a first post-attack copy of the Daily Mail: "I learned nothing fresh except that already in one week the examination of the Martian mechanisms had yielded astonishing results. Among other things, the article assured me what I did not believe at the time, that the 'Secret of Flying' was discovered."

This was, of course, science fiction. But it was also prophetic. Uncle Spud's teenage nephew — who stamped his name on the first page of the novel and read it religiously once a year — would himself go on to discover many secrets of flying. That nephew was Robert Hutchings Goddard, inventor of the liquid-fuel rocket.

Goddard died in 1945. In the mid-1950s, a journalist named Milton Lehman began work on the rocket pioneer's biography, This High Man, published in 1963 by Farrar, Straus. A few months before publication, Lehman received a gift from Esther Goddard, Robert's widow. It was her husband's beloved copy of The War of the Worlds. "For Milton Lehman, with gratitude," she wrote, underneath the inscription from Uncle Spud.

Lehman noted the passage about the discovery of the Secret of Flying. "RHG?" he penciled eagerly in the margin. And, on the same frontispiece page where Spud and Esther had left their marks, he noted: "see p. 287 291!" In his own book, he mentions that at 50, Goddard wrote to the elderly Wells, thanking him for his inspiration. Wells wrote back: "Thank you for your fine letter. It's the sort of greeting one appreciates from people like you." 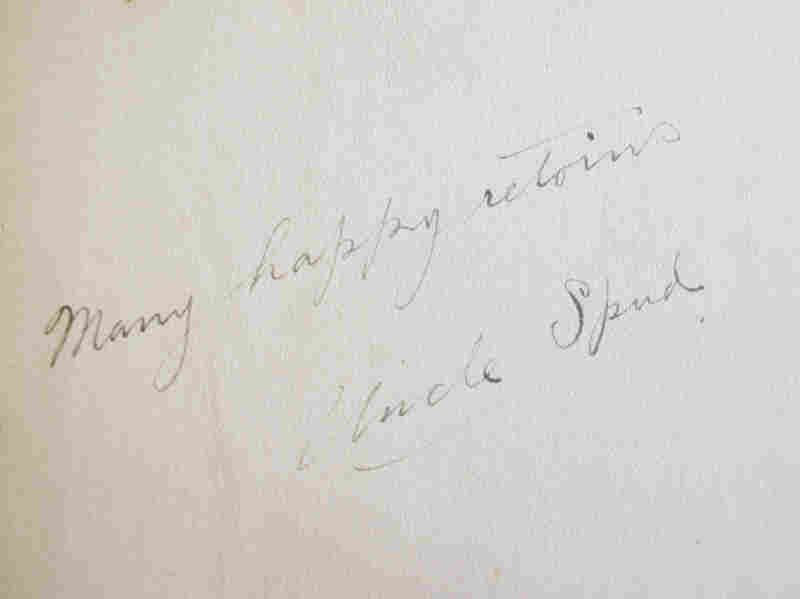 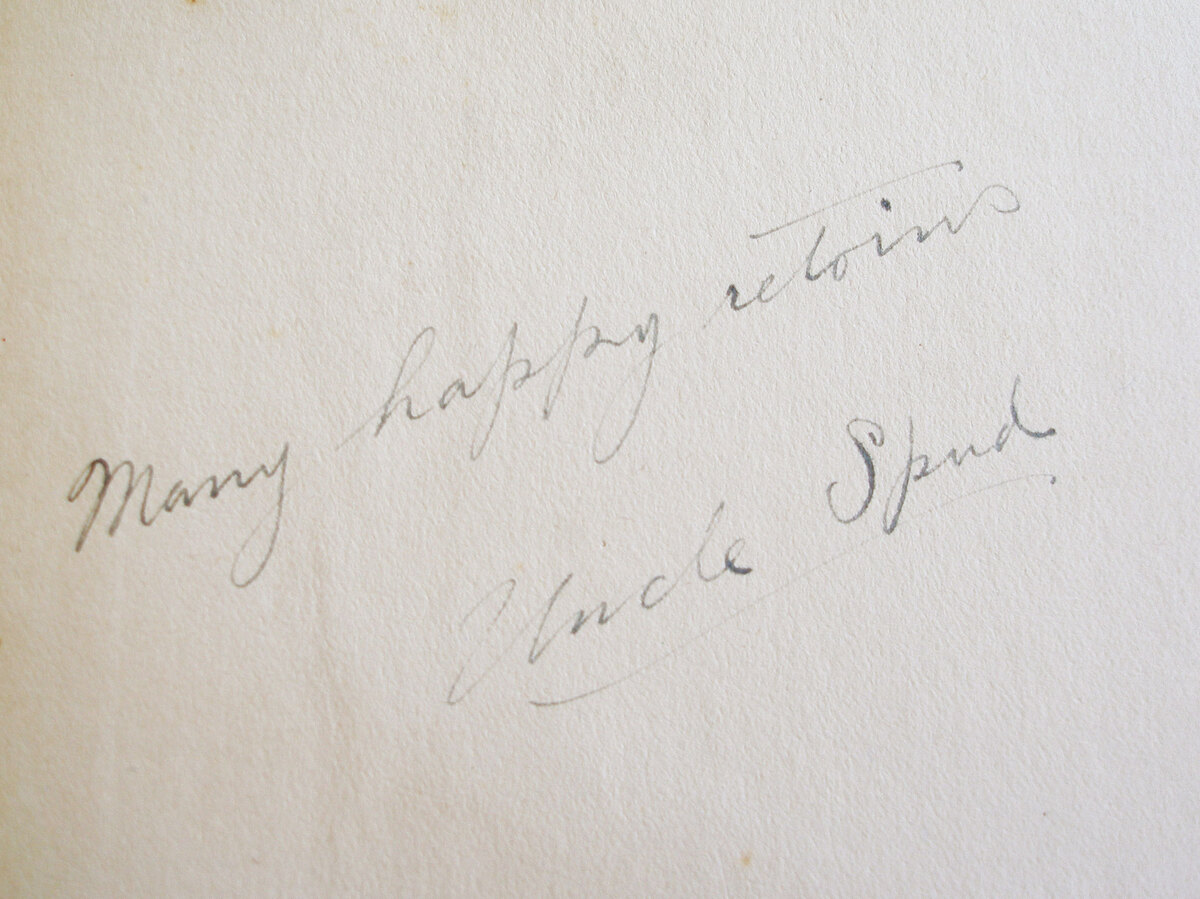 Lehman died in 1966, and the book passed to his own widow, also a writer and an editor. She lived till the age of 93. In March of this year, she died, and The War of the Worlds was packed into boxes with her other books. Weeks later, as her grandchildren sat on the floor sorting through them, they found it. They read the words from Uncle Spud and Robert and Esther and Milton, and realized what it was. Or, I should say, we realized what it was. I am one of those grandchildren, and the book sits on the table in front of me.

What happens to our books when we die? Many books disappear before we do, of course; they fall apart, or we put them out on the stoop for scavengers. A book like this one, however — a text that is still read and reprinted, that has played a notable role in the 20th-century imagination, and then a copy of the text that played an especially interesting role — is likely to be passed down carefully as long as we can preserve and recognize it. Like the Bibles some families use to record their histories, it traces a chain of readers through time.

The Harvard English professor Leah Price, in her recent book How to Do Things with Books in Victorian Britain, mentions that often the very condition of a book changing hands is death: "One measure of the value that readers attach to books (as opposed to, say, newspapers) is that they enter circulation only against the owners' will." This is particularly true of "association copies," the collector's term for books signed by the author to a significant person, or books owned and perhaps annotated by someone of note, which can become a kind of talisman: "Borrowing the logic of the saint's relic, association copies invest the object with value borrowed from the identities of its human users. And like the saint, the previous owner must be dead." 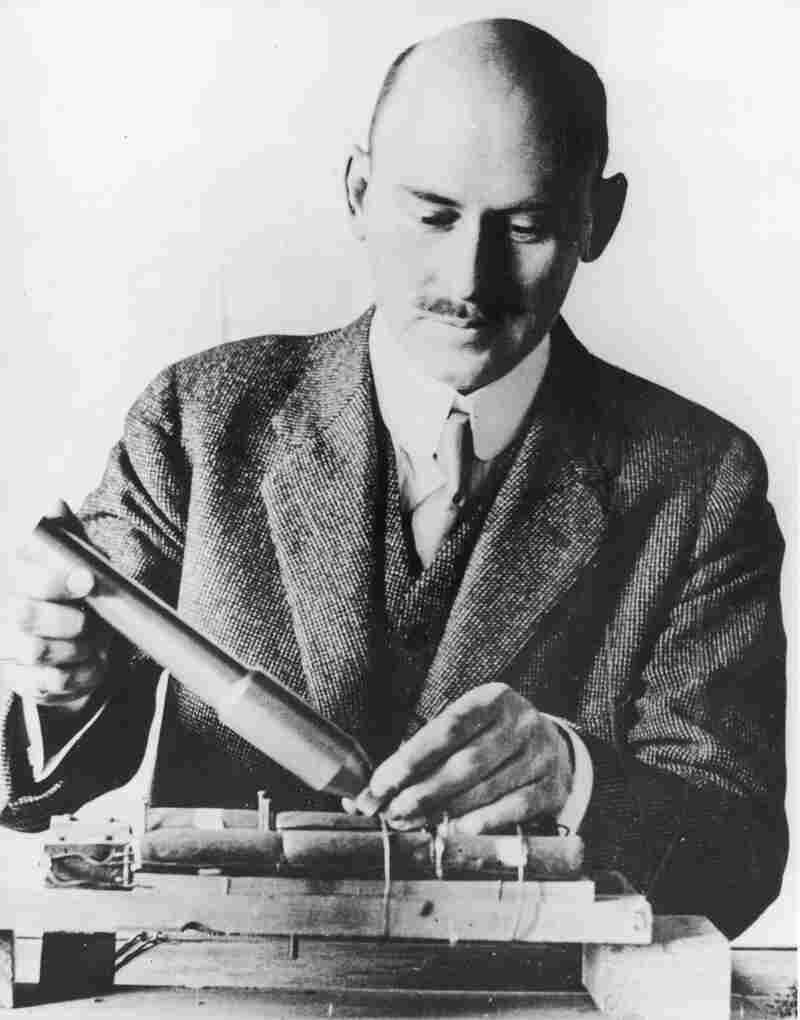 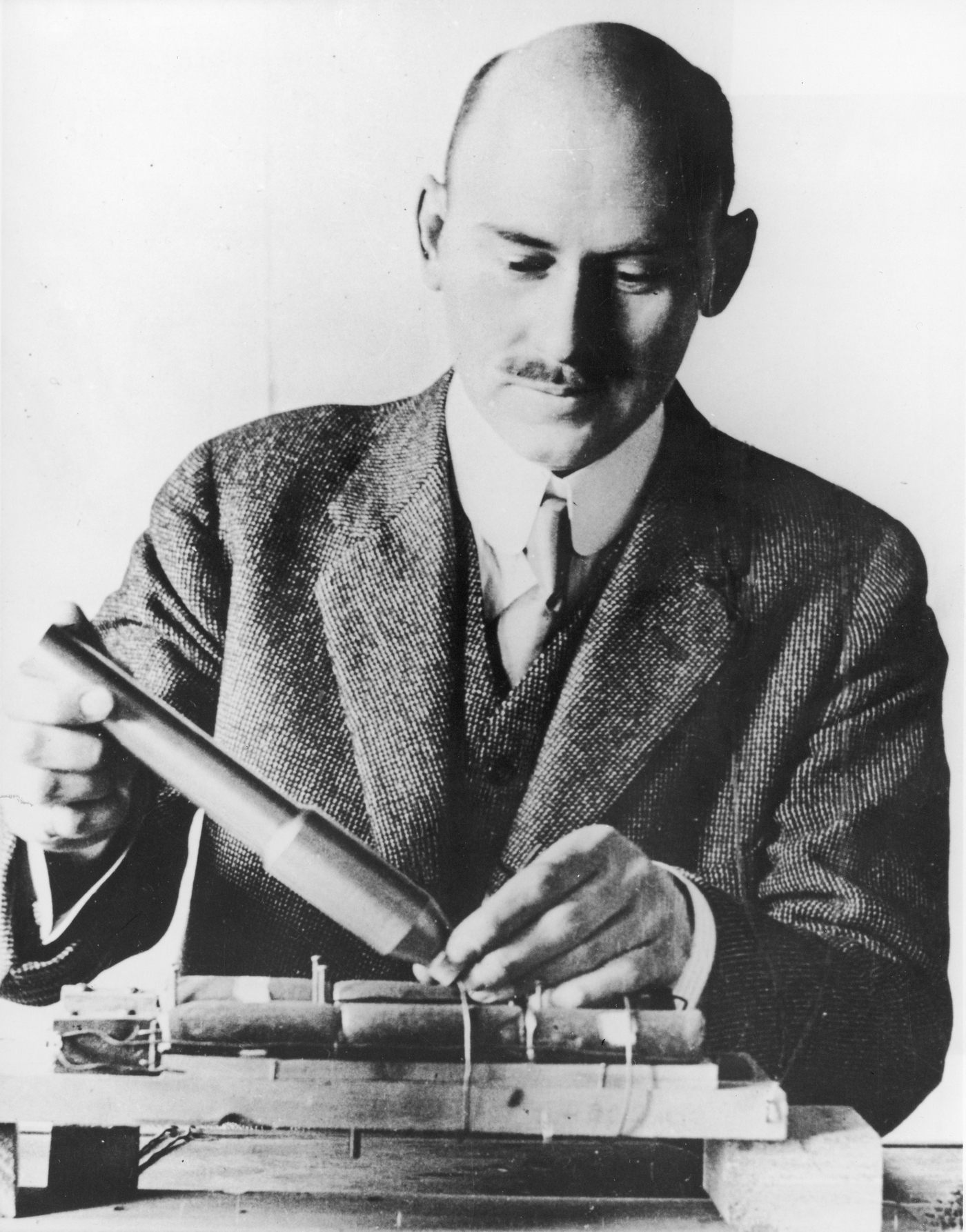 Goddard works with a steel combustion chamber and rocket nozzle, around 1915.

Whenever serious readers die, their heirs face the task of dispersing their books. But few of us like to think about what will happen to our own libraries. Will our children value our books (and will they have shelf space for them)? Will they be bought by a serious research library, or draw bids at Christie's? Not unless we are famous, or they are first editions. Perhaps they will re-enter circulation at a used bookstore, sold for pennies and resold for a few dollars: it's pleasant to imagine them released back into the sea of books, to be caught afresh by a new reader. Of course, this may be something of a fantasy; even New York's Strand, with its "18 miles of books," turns down many offerings these days. (They did accept the huge annotated collection of novelist David Markson after his death in 2010, however, and the treasure hunt for his books sparked a fascinating discussion among his fans.)

As Price's book suggests, the question of what to do with books that outlive their owners has only been a common problem since the mid-19th century, when the steam-powered press and the advent of cheap paper caused a vast expansion of the book market. Before that, few families would have had the problem of a surfeit of books. Now, though, we may be reaching the end of the 150-year-old print boom, and with it a transformation in the way we have shared books, reader after reader and life after life.

In the age of the e-book, the paper book faces two possible and antithetical fates. It may become something to be discarded, as with the books that libraries scan and cannibalize. (In the introduction to another book, Unpacking My Library: Writers and Their Books, Price mentions the severed book spines that hang on the wall at Google, "like taxidermists' trophies.") Alternatively, it may become a special object to be preserved and traded. My grandfather's copy of War of the Worlds obviously falls into the second category — but very few of the millions of books published since the mid-19th century are ones you'd want to own. If Amazon has a "long tail" of obscure but occasionally purchased titles, the tail that goes back 150 years is near endless and thin as thread.

Meanwhile, the kind of "serial" book sharing (as Price describes it) that occurs over time is giving way to simultaneous, "synchronous" sharing. With the Kindle, you can see what thousands of other Kindle readers are highlighting in the book you're reading — a fairly astonishing innovation. But the passage of books from hand to hand, gathering inscriptions along the way, is not part of the e-book economy. Will your grandchild inherit your Kindle books? No one knows, but given password protection and the speed at which data becomes obsolete, that seems highly unlikely.

Still, as far as posterity goes, the e-book system has some genuine superiorities over the old economy. Annotations exist in the cloud, so if your house burns down they are preserved. Your marginalia is accessible to more than just someone who holds the volume itself — biographers of the future will surely appreciate not having to count on a generous widow bequeathing them their subject's reading copy. With e-books, there's no need to fight over a single physical library copy; no trees need be cut down; unsold books need not be pulped; you don't need to lug books from apartment to apartment; pages will never be dotted with mildew.

But what do we lose as we bid farewell to what may turn out to have been a brief period in which common people owned physical books? I think of my own already excessive book collection, with its books that I have loved and worked on (as an editor and translator) and received as presents. Though I hope someone in the generation after mine will love living with them too, it doesn't really matter to me: I won't be there to see it.

But when I think of sorting through the boxes of my grandmother's books — even the ones we couldn't keep, or didn't want — and what we found there, I am grateful not to have been handed her Amazon password instead. Among all the gifts of the electronic age, one of the most paradoxical might be to illuminate something we are beginning to trade away: the particular history, visible and invisible, that can be passed down through the vessel of an old book, inscribed by the hands and the minds of readers who are gone.