Accessibility links
5 Ways To Spark Your Creativity Inspiration may seem rare, but you might be able to increase the odds of having a genius moment. Research points to some surprisingly simple triggers of innovation: taking a shower, living in a far-off land or working in a blue room. Eureka! 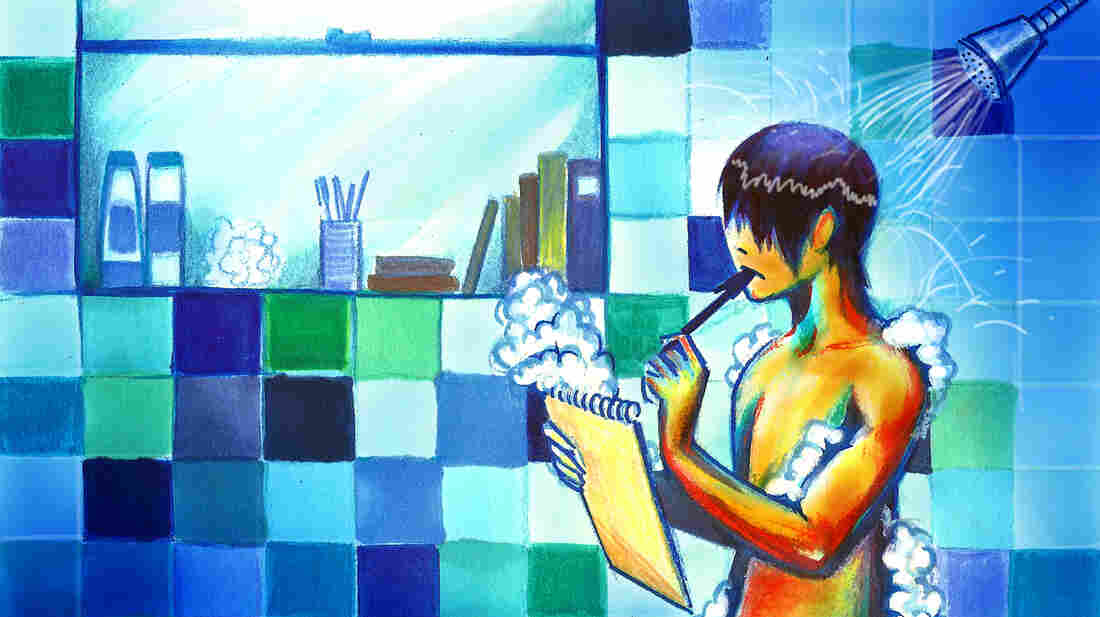 Taking a shower may help inspire big ideas. Working in a blue room may help, too. Ayodha Ouditt/NPR hide caption 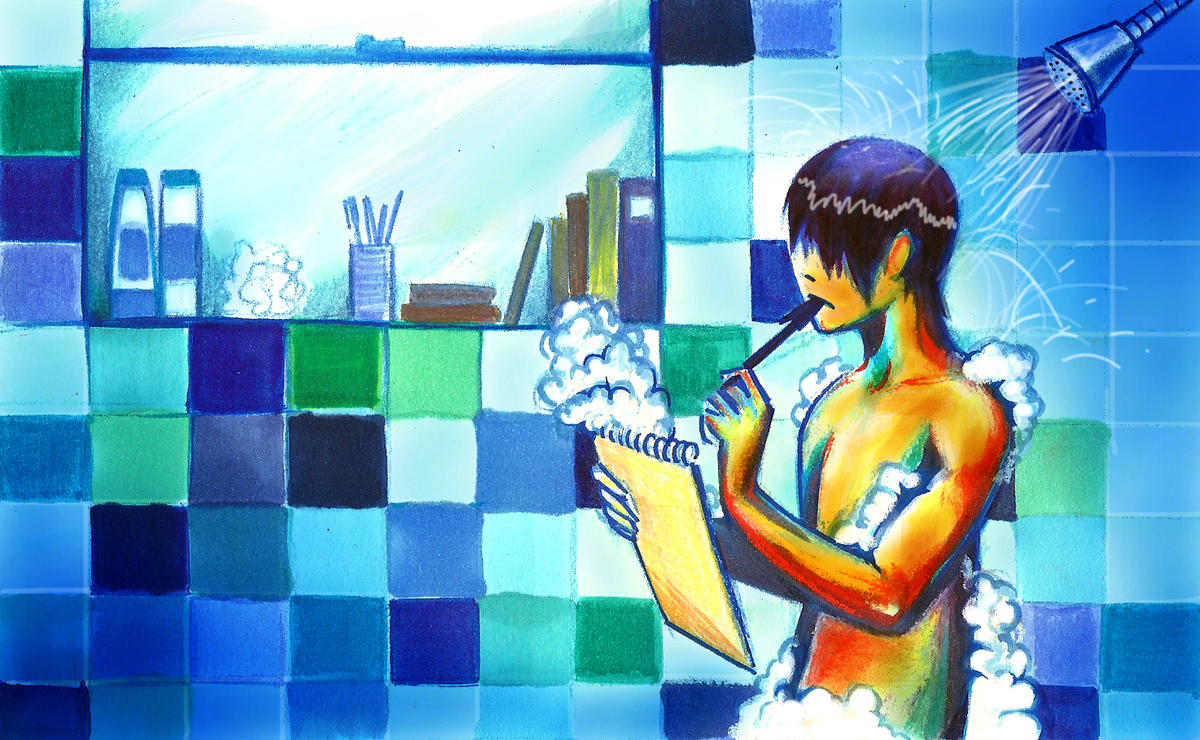 Taking a shower may help inspire big ideas. Working in a blue room may help, too.

Innovation is the name of the game these days — in business, in science and technology, even in art. We all want to get those big ideas, but most of us really have no idea what sets off those sparks of insight. Science can help! In the past few years, neuroscientists and psychologists have started to gain a better understanding of the creative process. Some triggers of innovation may be surprisingly simple. Here are five things that may well increase the odds of having an "Aha!" moment.

A seemingly mindless task — showering, fishing or driving — might help spur creative thoughts, as the mind wanders from "lather-rinse-repeat" to a recent problem, and then back again. There's even history to back this up.

As the ancient Greek engineer Vetruvius told us, Archimedes was lounging in a public bath when he noticed the water level go up and down as people got in and out. He suddenly realized that water could help him calculate the density of gold. "This alteration [of thoughts] may be very useful for churning the creative process," says Jonathan Schooler, a psychology professor at the University of California, Santa Barbara.

Downtime also seems to reset the brain. In an upcoming study in Psychological Science, Schooler and his colleagues gave volunteers creativity problems followed by a period of rest. During that rest period, some were assigned a demanding task that kept the brain fully occupied, while a second group got a simpler task that allowed for mind wandering. A third group was given no task at all. Afterward, they all went back to try to complete the original problems. Those who could let their minds wander during the resting time were more likely to solve the creativity problems.

Researchers aren't quite sure why mindless tasks help the creative process, Schooler says, but it could be that such tasks allow two different brain networks that aren't usually turned on at the same time to be active. Schooler says: "It's possible that there's some opportunity for cross talk that's useful."

As we grow up, colors take on specific associations — red means danger, and blue connotes peace and tranquility. Those associations affect how we think. In one experiment, people facing a red computer screen did better at detail-oriented tasks like proofreading. Volunteers who faced a blue screen did better at creative tasks. That study appeared in 2009 in the journal Science. Why the difference? Red makes us anxious, and "anxiety causes you to focus," says Mark Beeman, an associate professor of psychology at Northwestern University who studies the neuroscience of creativity. Blue, he says, tells us we can relax and let the imagination roam free.

Want to discover a new planet? Live in a foreign land. That's what German-born astronomer William Herschel did while living in England in 1781 — he found the planet Uranus. He's just one of many great scientists, artists, writers and composers who spent significant time living far from their native turf. A week in Paris isn't enough to light the creative spark, delightful though that trip may be. The foreign sojourn has to be long enough to challenge your habitual ways of thinking and living.

People who had lived abroad performed better on creative problems and tasks, such as drawing alien creatures, according to a 2009 study in the Journal of Personality and Social Psychology. They bested people who had traveled for only a brief time, or who had never left home. The researchers think adapting to a new culture may spur some sort of psychological transformation that enhances creativity.

Mood matters when it comes to creativity. Anxiety focuses a person, but good cheer and contentment liberate creativity. It "might not just relax your scope of interest, but actually broaden it further," allowing you to look at a problem in new ways and come up with a solution, says Beeman. It could be as simple as seeing a YouTube video of a laughing baby. That's one of the images that boosted the creativity in a 2010 study in Psychological Science. Mood-boosting music helped, too. Beeman's own research has indicated that a part of the brain called the anterior cingulate cortex is activated. That brain region is linked to decision-making, empathy and emotion. Gearing it up may help the brain reach new insights by detecting ideas it may have otherwise ignored.

Sleep helps generate new ideas in several ways. During sleep, the brain consolidates memories. That act of consolidation actually reorganizes thoughts, much like organizing books on a shelf. The new arrangement can help extract knowledge and generate new associations. And that half-awake period right before you fall asleep or when you wake up may also help you focus on a problem.

Legend has it that Thomas Edison came up with an invention to harness the insights generated during those half-awake moments. When he catnapped, he would hold a handful of ball bearings above a pie plate. If he fell asleep, the ball bearings would fall, waking him up to write down his thoughts.

But you don't need noisy ball bearings to gain the benefit of sleep. Just waiting a day to tackle a problem again takes advantage of the consolidation process, increasing the odds that new solutions to the problem will emerge. But don't expect this to work every time. Beeman says the sleep-on-it solution works best when people feel that they are getting close to an answer that is most likely to be solved by waiting a day. In his own research, he found it's those "it's on the tip of my tongue" moments that are most likely solved with sleep.

"When you're stuck on a problem," Beeman says, "getting away from it for a while helps." Especially if you're in the tub. In a blue room. Watching the Marx brothers.

This article is part of Joe's Big Idea, an NPR project to explore how innovations come about.

The question of what sparks innovation and creativity has been the source of fascination for centuries, and our era is no exception. Recent books on the subject include:

Where Good Ideas Come From: A Natural History of Innovation, by Steven Johnson (Riverhead, 2011).