Accessibility links
The Nation: In Egypt, A President Without Power Egyptians are on edge, waiting to see who comes out of the latest political deadlock as the new president, but, as The Nation's Sharif Abdel Kouddous points out, whoever wins will likely be at the mercy of the military.

The Nation: In Egypt, A President Without Power

The Nation: In Egypt, A President Without Power 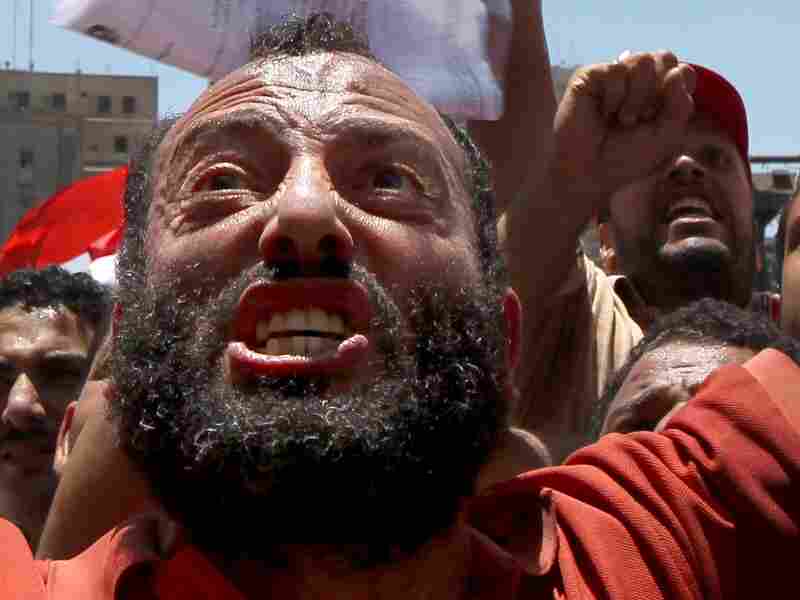 Supporters of the Muslim Brotherhood hold portraits of their candidate, Mohamed Morsi, as the they protest in Cairo's Tahrir square on June 21. Egypt was on edge after the Brotherhood declared an open-ended protest and warned of 'confrontation' unless their candidate is named president. Marwan Naamani/AFP/Getty Images hide caption 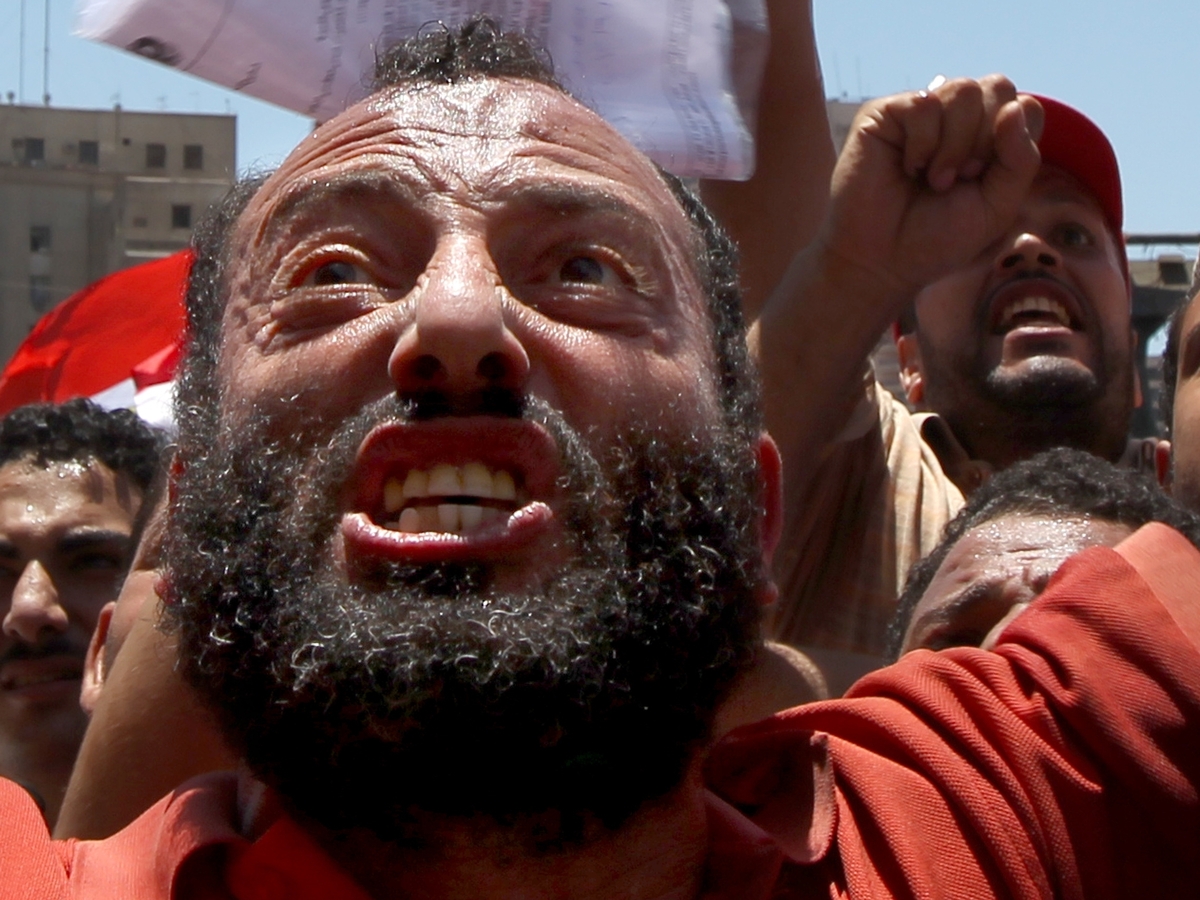 Supporters of the Muslim Brotherhood hold portraits of their candidate, Mohamed Morsi, as the they protest in Cairo's Tahrir square on June 21. Egypt was on edge after the Brotherhood declared an open-ended protest and warned of 'confrontation' unless their candidate is named president.

Read Another Article On The Evolving Situation In Egypt

Sharif Abdel Kouddous is an independent journalist based in Cairo. He is a Democracy Now! correspondent and a fellow at The Nation Institute.

Last week's presidential elections in Egypt were supposed to mark the final step in what has been an arduous transition from military rule to an elected civilian government. Instead, sixteen months after President Hosni Mubarak was ousted in a popular uprising calling for freedom and social justice, the Supreme Council of Armed Forces has assumed near-full control of all of the key branches of state.

Minutes after polls closed Sunday evening in the country's first-ever competitive presidential election, which pitted the Muslim Brotherhood's Mohamed Morsi against Ahmed Shafik, Mubarak's last prime minister, the SCAF issued a set of constitutional amendments that strip the incoming president of almost all significant powers and cement military authority over the post-Mubarak era.

The move by the ruling generals came days after the dissolution of the popularly elected parliament by a court packed with Mubarak-appointed judges, as well as a decree by the Minister of Justice reintroducing elements of martial law to the country by granting the military broad powers to arrest and detain civilians.

"Egypt has completed its full transition into a military dictatorship," wrote Hossam Bahgat, head of the Egyptian Initiative for Personal Rights, after the amendments were made public.

The eleventh-hour declaration awards the ruling generals sweeping powers, including the right to issue legislation in the absence of a sitting parliament, and total control over the military's affairs, shielding the army from any presidential, parliamentary or public oversight. Most prominently, the amendments remove the president's role as commander-in-chief — with SCAF head Field Marshall Hussein Tantawi assuming that power — effectively transforming the SCAF into a fourth branch of state, constitutionally separate from the executive, legislative and judiciary.

The military also tightened its grip over the drafting of Egypt's new constitution by granting itself an effective veto over any clauses that don't meet with its approval. It can even go further and directly handpick the 100-member body that will write the constitution. The Constituent Assembly, elected by the Muslim Brotherhood–dominated parliament two days before it was dissolved, faces allegations by secular forces that it is dominated by Islamists who have secured themselves the lion's share of seats. The new amendments allow the SCAF to dissolve the current body if "encounters an obstacle" — a disturbingly vague condition — and select the Constituent Assembly themselves.

The military council further eroded the authority of the executive with another decree, made public on Monday, to form a seventeen-member National Defense Council, to be chaired by the incoming president, but which will include eleven senior military commanders and will make decisions based on a simple majority vote.

Meanwhile, the head of the SCAF Advisory Council, Sameh Ashour, suggested the winner of the election might only serve on an interim basis, until the new constitution is written. "The newly elected president will occupy the office for a short period of time, whether or not he agrees," Ashour told Al-Jazeera.

Activists and rights campaigners decried the series of moves by the military, which they said render the SCAF's promise to hand over power by June 30 effectively meaningless. The sentiment was reflected in the front-page headline of the privately owned daily Al-Shorouk the morning after the election: "A president without powers."

The runoff itself was deeply divisive, marked by heavy negative campaigning by both sides. Shafik, a stalwart of the former regime, campaigned on a law-and-order platform, vowing to use force to crush protesters, while vilifying the Brotherhood and pledging to act as a bulwark against the rise of Islamists in government. Meanwhile, Morsi sought to portray himself as the revolutionary candidate facing off against the remnants of Mubarak's regime.

Both men were polarizing figures, and their candidacies evoked the binary political landscape that prevailed in Egypt in the decades leading up to the revolution. Enthusiasm among the electorate was clearly low, with many voters saying their choice of candidate was based largely on preventing the other from reaching the presidency.

The Brotherhood has claimed it won the poll, releasing figures that show Morsi with nearly 52 percent of the vote to Shafik's 48 percent. The results appear to coincide with reports from local media outlets and independent observers. However, the Shafik campaign is vigorously denying their candidate has lost and insists Shafik came out ahead with a tally of 51 percent. Both sides have launched appeals against the conduct of the vote before official results are announced on Thursday, June 21.

The Brotherhood has come out strongly against the constitutional amendments and says it does not recognize the Supreme Constitutional Court's ruling to dissolve parliament, a decision widely viewed as highly politicized. The army deployed troops outside the parliament on Saturday to prevent MPs from gaining access to the building.

"This is against the people's will and the SCAF does not have a genuine intention to hand over power," the Brotherhood said in a statement. On Tuesday, the group helped lead a protest of tens of thousands in Tahrir Square and outside parliament, along with a number of other political forces, including the Salafi Nour party and the April 6 Youth Movement.

Adding to the chaos, that very night, the official state news agency caused a firestorm when it reported that Mubarak had been declared "clinically dead" after suffering a stroke. The former president was transferred from his prison cell where had been held since June 2, after receiving a life sentence on charges of involving the killing protesters in January 2011. Conflicting reports soon emerged that he was in fact stable and on a respirator. Reports of Mubarak's failing health had frequently appeared in the media ever since charges were brought against him last year and the latest news was treated with widespread criticism in Egypt. The next day, The New York Times reported that his lawyer denied the former president had nearly died, insisting he simply fell down in the prison bathroom.

Meanwhile, the Carter Center, one of three international organizations accredited to witness the election, expressed "grave concern" about the military's actions. "It is now unclear whether a truly democratic transition remains underway in Egypt," the group said in a preliminary statement released Tuesday.

In Washington, the reaction was similar from both the State Department and the Pentagon. "We are particularly concerned by decisions that appear to prolong the military's hold on power," said State Department spokeswoman Victoria Nuland.

U.S. policy towards Egypt has remained unchanged since before the revolution, when Washington backed the Mubarak regime for decades with $1.3 billion in annual military aid. In March, the Obama administration used a national security waiver to bypass new restrictions imposed by Congress that would have made aid to Egypt conditional on certification from the State Department that the SCAF was making progress on the transition to democracy. The move came in the wake of a crisis in which Egyptian authorities raided several nongovernmental organizations in Cairo, including three funded by the United States, not to mention continued and widespread human rights abuses committed by the military and security forces.

"[The United States] will either have to suspend the aid or be openly in favor of SCAF's constitutional coup if they continue it," writes Cairo-based blogger and analyst Issandr El-Amrani. "The time has come: the US may not be able to influence developments in Egypt, but at least it can stop underwriting them."

The presidential elections mark the third time Egyptians have gone to the polls only to find their votes rendered meaningless. A nationwide referendum on nine amendments to the constitution in March 2011 was supplanted by SCAF a few days later when it unilaterally issued a "Constitutional Declaration" that included over sixty articles. The parliamentary elections last fall were cancelled by this month's court ruling to dissolve the People's Assembly. Now, millions have elected a president who was stripped of most of his authority by the SCAF in a last-minute power grab.

If voting has come to mean nothing with the military in charge, the masses that united to oust Mubarak may soon begin to seek other avenues for change.