Accessibility links
'The Newsroom' Caught Up In A Partisan Divide Aaron Sorkin's new HBO series follows the inner workings of a cable news show that sets out to challenge our hyperpartisan, 24/7 news culture. But critic John Powers says Sorkin has created a show that replicates much of what it thinks it's opposing. 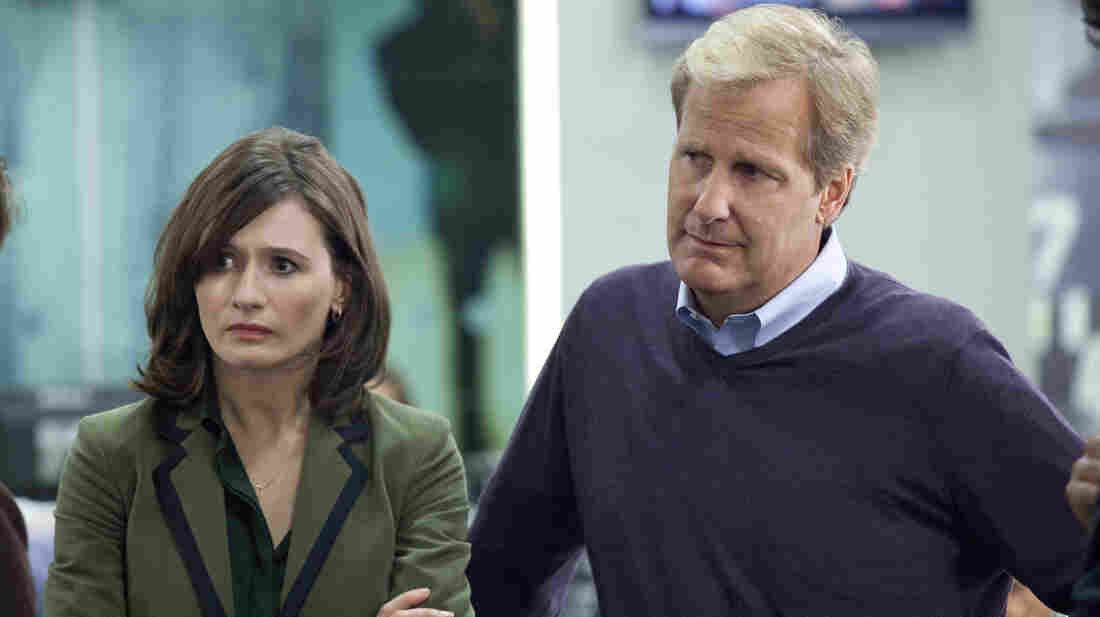 If anyone in Hollywood wears his idealism like a boutonniere, it's Aaron Sorkin. As The West Wing made clear, Sorkin loves telling stories about principled individuals — especially liberals — struggling with institutions that might compromise their integrity.

He's at it again in The Newsroom, a breezy, preachy, exasperating new HBO series set inside an imaginary cable network. Jeff Daniels stars as crusty but decent Will McAvoy, a once-Olympian anchor who's begun playing it so safe he's known as "the Jay Leno of news."

After he has a public meltdown, his twinkly-wise boss, played by Sam Waterston, hires a new executive producer for Will's nightly newscast. Her name is MacKenzie McHale — that's Emily Mortimer — a Peabody-winning reporter back from Iraq who wants to rekindle Will's faith in TV journalism. Trouble is, the two of them have a past. 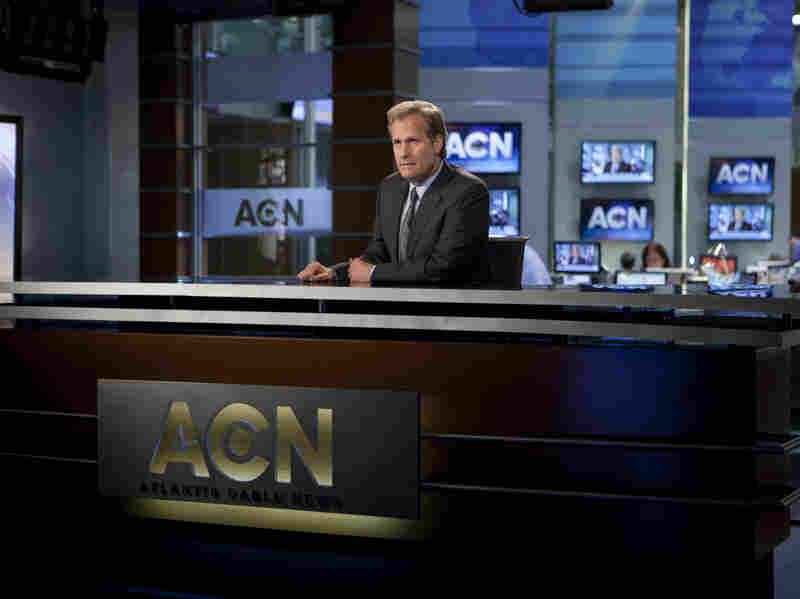 After a public meltdown and a wholesale staff defection, Will McAvoy (Jeff Daniels) decides to take a different approach with his nightly news show. HBO hide caption 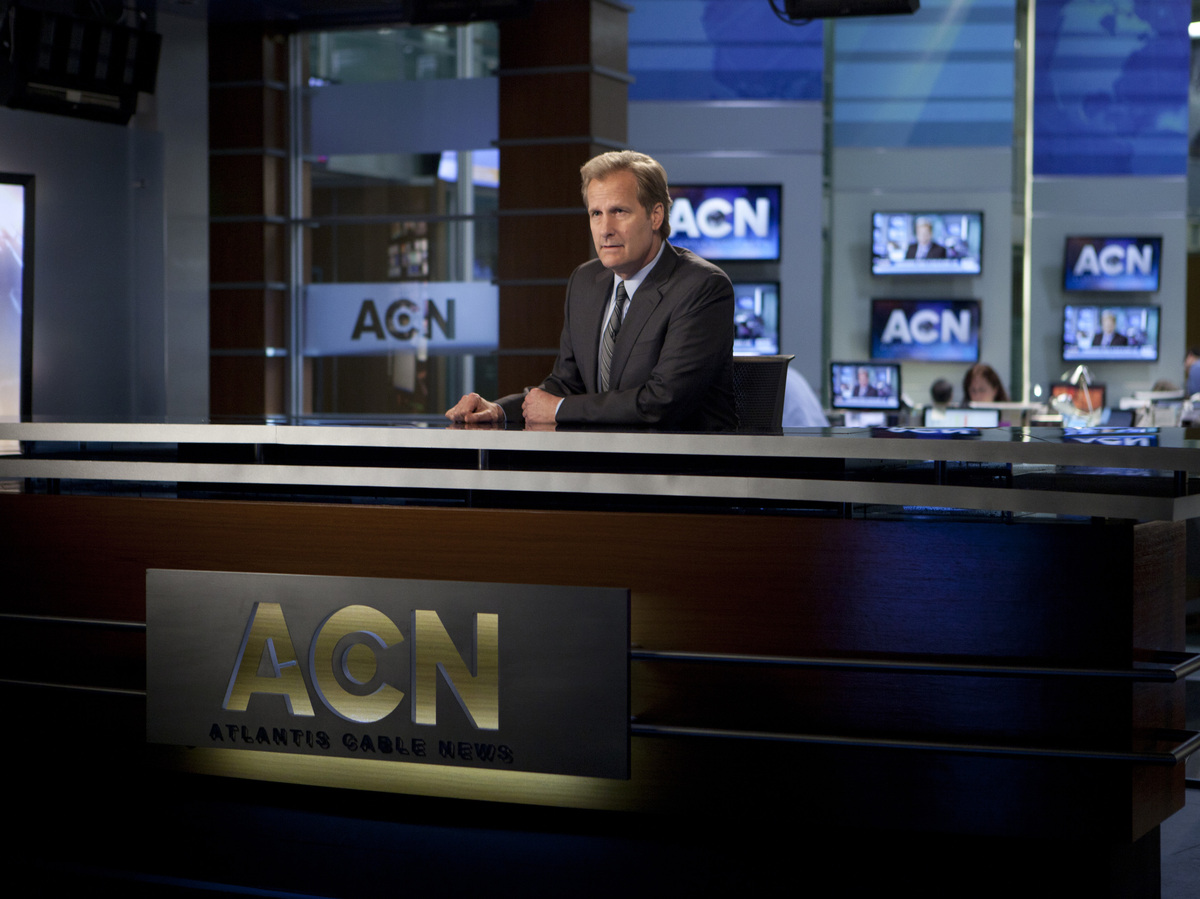 After a public meltdown and a wholesale staff defection, Will McAvoy (Jeff Daniels) decides to take a different approach with his nightly news show.

Even so, MacKenzie wants him to accept the quixotic challenge of doing an honest, truthful, old-fashioned news show like those run by Edward R. Murrow or David Brinkley — and they argue about whether that's even possible nowadays.

But eventually, their argument is interrupted by the news itself — in this case, the beginning of 2010's Deepwater Horizon oil spill. It's part of the show's structure that each week, Will, MacKenzie and their staff cover real-life events, like the rise of the Tea Party or the shooting of Rep. Gabrielle Giffords — and they do it in a way that Sorkin clearly thinks our TV news shows should have covered them.

Now, if you're a news junkie like me, The Newsroom could hardly appear more alluring, for it promises to do two fascinating things: take a smart look at how someone might try to do serious news in our current, unserious culture; and explore the complex lives of the men and women who try to do it.

I'd like to say that the show lives up to this promise, but after seeing the first four episodes, I have my doubts. Yes, Sorkin knows how to write sharp, highly watchable scenes. Yes, Daniels is believable as Will, who physically resembles that shambly bear Chris Matthews. And yes, the cast boasts some terrific young actors — in particular Alison Pill, John Gallagher and Thomas Sadoski as producers who get caught up in a romantic triangle.

Yet for all its virtues, The Newsroom often feels shockingly dated, as if Sorkin had never seen shows like The Wire, Mad Men, or Girls, shows that have raised the level of the TV game. Far from portraying his reporters and producers as adults with rich, dark, complicated souls, Sorkin turns them into overgrown teenagers.

Nobody is married, for instance. Instead, their personal lives are all about dating, and the show's filled with wacky-cute public embarrassments, as when — right before a live broadcast that's in serious trouble — MacKenzie has the sort of silly, unprofessional freakout about a mis-sent email you might expect from Ally McBeal, not from a Peabody-winning reporter wounded in Fallujah.

Sorkin's take on TV news is equally callow. Although supposedly devoted to honest, truthful, old-fashioned news, Will quickly morphs into a version of Keith Olbermann, a prosecutorial anchor on the warpath against the Tea Party, whose members are all portrayed as dopes, dupes or ignoramuses. The Newsroom makes it clear that Will's not merely telling the truth, but that any intelligent, right-thinking person knows he's telling the truth.

In fact, the show's so riddled with disapproval toward those who watch Fox News, read the tabloids or enjoy reality TV that it feeds the cliche of liberals as smug elitists who reflexively look down on anyone who doesn't agree.

Like many of us, Sorkin is driven crazy by what's going in our stridently divided culture, yet he's not quite sure what to do about it. And so, rather like a fly caught in a bottle, he buzzes around and around, touching on lots of things, sometimes quite intelligently, but never escaping outside to get a bigger picture.

Trapped inside the bottle, he's created a show that replicates much of what it thinks it's opposing. It's partisan. It's sermonizing. And it's terrified that if it's too brainy or complex, the audience won't find it entertaining. The Newsroom may think it's grappling with the crisis in American culture, but in the end it's just another symptom.