Accessibility links
Paul Williams: The Trailblazing Black Architect Who Helped Shape L.A. When Paul Williams decided to become an architect, people told him no white clients would work with an African-American. But he persevered, eventually designing thousands of buildings, including the Beverly Hills Hotel and homes for stars like Frank Sinatra and Lucille Ball.

Paul Revere Williams began designing homes and commercial buildings in the early 1920s. By the time he died in 1980, he had created some 2,500 buildings, most of them in and around Los Angeles, but also around the globe. And he did it as a pioneer: Paul Williams was African-American. He was the first black architect to become a member of the American Institute of Architects in 1923, and in 1957 he was inducted as the AIA's first black fellow.

His granddaughter, Karen E. Hudson, has been chronicling Williams' life and work for the past two decades. Her latest book, Paul R. Williams: Classic Hollywood Style, focuses on some of the homes of his celebrity clients. They feature many characteristics that were innovative when he used them in the 1920s through the '70s and are considered common practice now — like the patio as an extension of the house, and hidden, retractable screens.

When Paul Williams began his career, he could find no black architects to be his role models or mentors. Born in downtown Los Angeles in 1894, Williams became orphaned before he turned 4 when his parents, Chester and Lila, died of tuberculosis. A family friend raised him and told him he was so bright, he could do anything he wanted. And what he wanted was to design homes for families — perhaps because he lost his own so early in his life. Despite warnings from those who thought he was being impractical ("Your own people can't afford you, and white clients won't hire you," was one such warning), Williams became an architect. 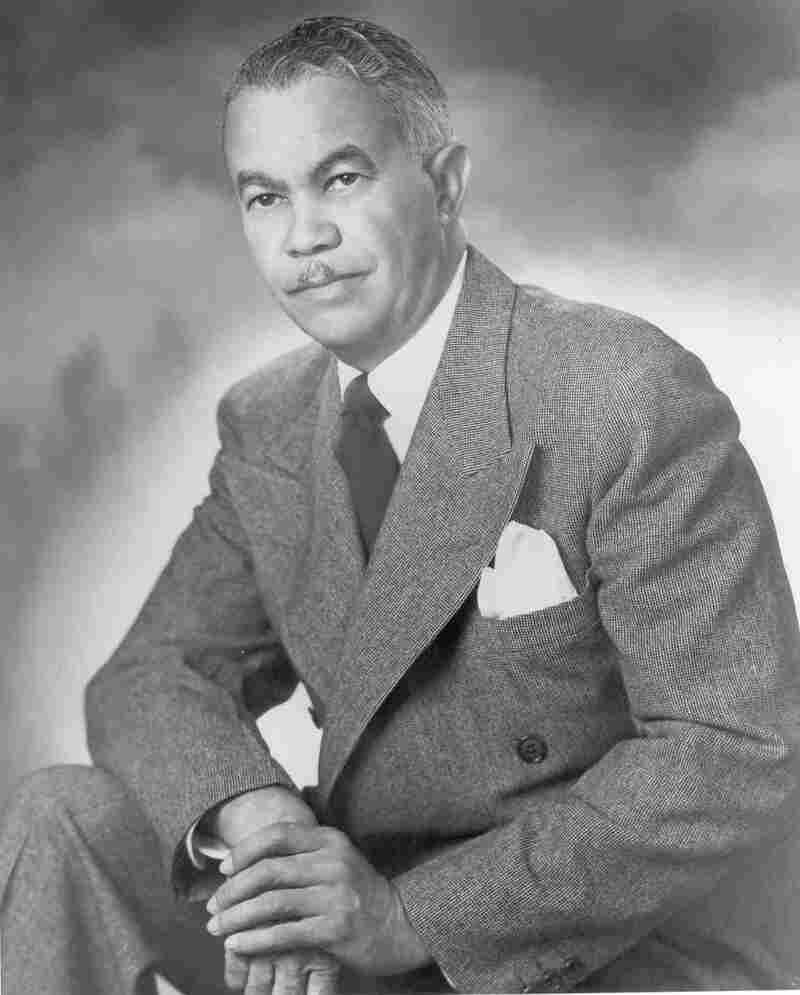 Architect Paul Williams (in a photo thought to be from the 1940s or '50s) developed the ability to sketch buildings upside down to accommodate white clients who might not want to sit next to him. Courtesy of Karen E. Hudson hide caption 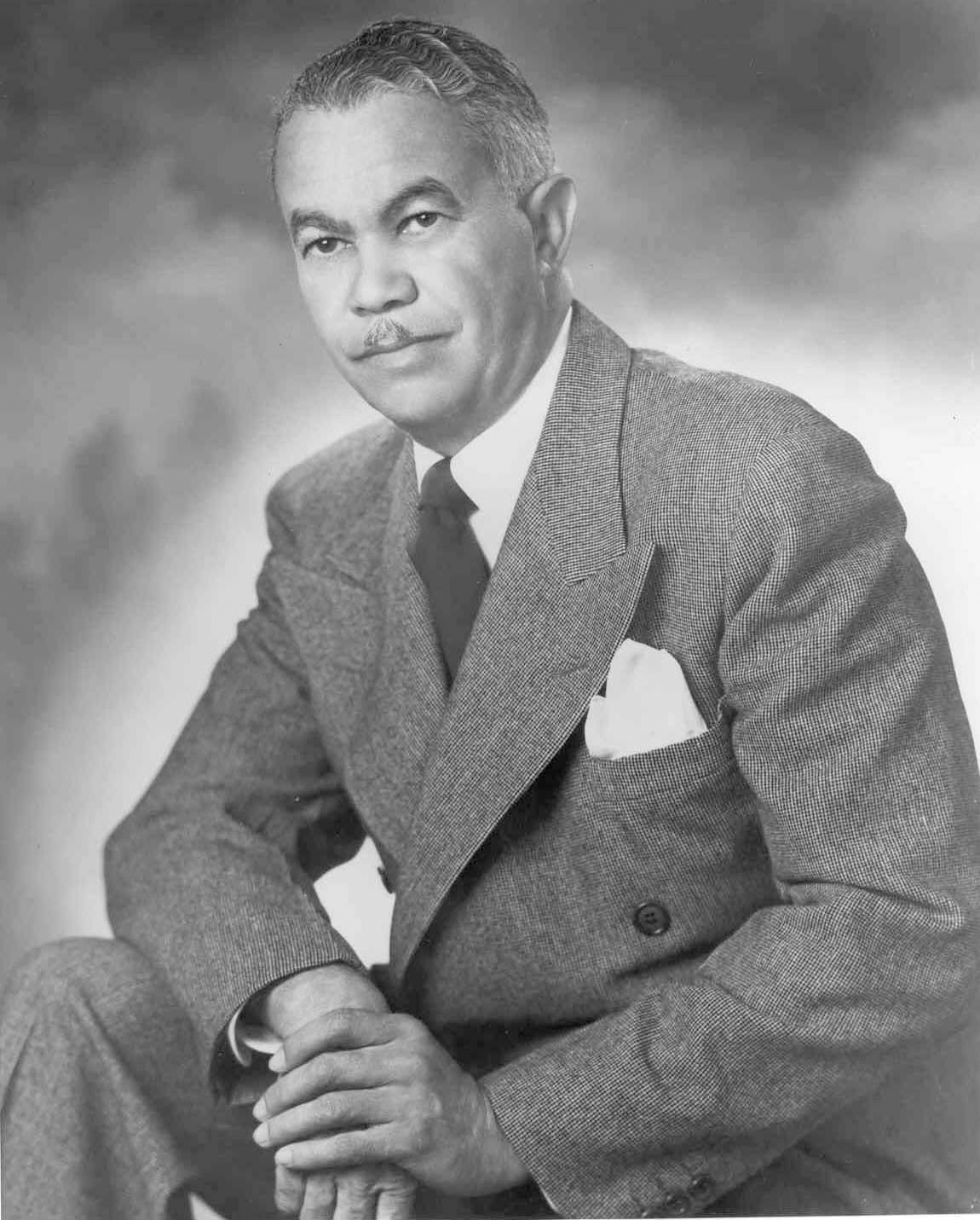 Architect Paul Williams (in a photo thought to be from the 1940s or '50s) developed the ability to sketch buildings upside down to accommodate white clients who might not want to sit next to him.

His work has come to signify glamorous Southern California to the rest of the country — and to the world. One of his hallmarks — a luxuriantly curving staircase — has captivated many a potential owner. Retired financial services magnate Peter Mullin remembers how he felt when he saw his 1925 Colonial, the first one Williams built in L.A.'s posh Brentwood neighborhood.

"The first time I saw it, I didn't think I could afford the house, but if I could afford the staircase, I wanted to take it with me!" Mullin laughs. He bought the house — once inhabited by producer Ingwald Preminger, brother of director Otto — and has enjoyed it for 35 years.

"Every now and then, I think about leaving," Mullin admits. "Then I look around ... and I can't. I just love this place."

That sentiment may explain why Williams' homes don't come on the market very often.

Bret Parsons is head of the architectural division of John Aaroe Group, a Beverly Hills real estate brokerage handling multimillion-dollar properties. He says when Williams homes come up for sale, real estate agents scramble to get the listing. "They're gobbled up in seconds," he says. "They're an absolute pedigree for someone to have in their arsenal."

Several of them were celebrities from Hollywood's heyday. Williams built an elegant bachelor pad for Frank Sinatra when the singer was between marriages. Lucille Ball and husband Desi Arnaz were clients. So was Cary Grant. Danny Thomas was both client and friend — Williams designed St. Jude Children's Hospital in Memphis gratis, as a favor to Thomas (and made Thomas promise not to tell, so he wasn't deluged with similar requests). In recent years, Denzel Washington, Ellen DeGeneres and Andy Garcia all have lived in Williams homes.

At the Beverly Hills Hotel, Williams designed the iconic Polo Lounge, the Crescent Wing and the Pink Palace's signature loopy signage. He also chose the colors — pink and green — that would signify the ultimate in service to its pampered guests for a century.

Actor-philanthropist Bill Cosby recalls seeing a Williams home when he and wife Camille went house-hunting. The TV series I Spy made Cosby famous — and rich. He and Camille wanted to live in Beverly Hills, and they wanted a brick home. "Brick is not conducive to the desert heat that is Los Angeles," Cosby chuckles, "but we were looking for brick."

See More Of Our Series On Innovation

To the East Coast Cosbys, brick symbolized a certain kind of moneyed refinement. "Back home, stucco was for poorer people — and in the winter, it was cold," he recalls. So when they were shown a 1932 brick Colonial Revival floating on rolling lawns, they were intrigued. When they walked inside, they were sold. "The entry was grand," Cosby says, drawing the swirl of the staircase in the air with one finger, "but once one entered the house, it became a home."

That innate ability to make grand spaces cozy is another Williams signature.

Sitting in the 1951 home Williams designed for himself, his granddaughter says her grandfather made many pragmatic adjustments to the reality of racism in his day. "He taught himself to draw upside down so white clients wouldn't be uncomfortable sitting next to him." And, Hudson says with a smile, "it became one of the things he was known for." Williams toured construction sites with hands clasped behind his back, like an English royal, because he wasn't sure every person would want to shake a black man's hand. So he gave them the option of extending their hand first. Many of the neighborhoods in which his homes were located were closed to him because of his race.

That's something California had in common with several other American states — not all of them in the South. Hudson notes that there were also restrictive covenants in greater Los Angeles. "By law, he could not live in some of the places [where he designed homes]. Particularly in Flintridge, where he designed his first home in his own office, the land deed said a black person could not even spend the night."

She says Williams found a way to work around such barriers because he had an ultimate goal in mind. "He believed that for every home and every commercial building that he could not buy and that he could not live in, he was opening doors for the next generation."

In a 1937 essay for American Magazine called "I Am a Negro," Williams shared some of his own philosophy.

"Virtually everything pertaining to my professional life during those early years was influenced by my need to offset race prejudice, by my effort to force white people to consider me as an individual rather than a member of a race," he wrote. "I encountered irreconcilables who simply refused to give me a hearing, but on the whole, I have been treated with amazing fairness."