Accessibility links
Movie Review - 'Brave' - A Fast And 'Brave' Female Comedy The movie Brave is Pixar's first feature with a female protagonist — a medieval Scottish princess named Merida (voiced by Kelly MacDonald) who asserts her independence and wreaks havoc. Critic David Edelstein says the film is "pure Pixar in its mischievousness and irreverence." 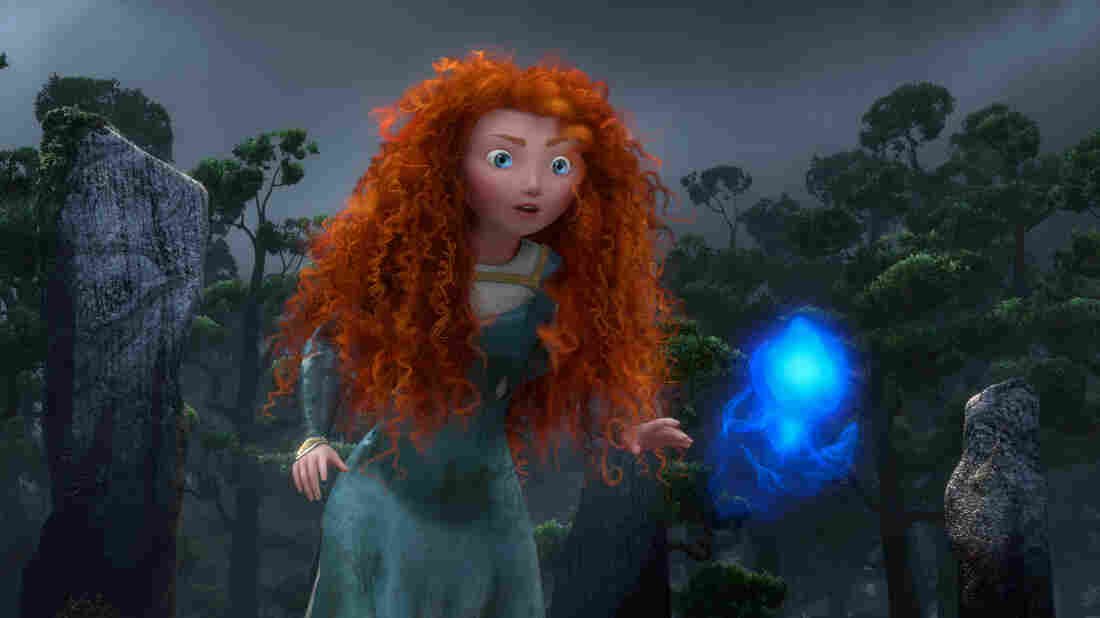 In Brave, Merida goes in search of a spell to get back at her mother, who wants to force her to marry a suitor. Disney/Pixar hide caption

Rated PG for some scary action and rude humor

First, I hate the title, and not because it's an adjective. Notorious, Ravenous, Rabid: great titles. Brave? Generic. And with the poster of a girl with flame-red curls pulling back a bow, it looks like yet another female-warrior saga, another you-go-girl action picture suggesting the biggest injustice to women over the last millennium has been the suppression of their essential warlike natures.

You'd hardly know this latest Pixar movie is a broad comedy, a farce, and that it centers not just on the redhead who wants to shoot arrows but the mom who constantly undermines her. It's closer to the uproarious Freaky Friday than the recent, glumly revisionist Snow White picture — and all the more delightful for it.

Now, the first part of the film is a bit misleading. After a prologue in which the huge medieval Scottish king Fergus goes nose-to-snout with a giant bear, Brave depicts his daughter, Merida, growing up and longing to head out. She wants to shoot arrows like her dad, to chase the wind and touch the sky — as proclaimed in a Celtic-inflected song on the soundtrack called, uh, "Touch the Sky."

But then the central conflict emerges: Merida, who teases her dad for constantly declaiming the bear-who-took-his leg story to anyone who'll listen, and who walks around with a longbow; and the mom who wants her to act like a stereotypical princess.

The hearty Scottish verbal attacks throughout the film splendidly evoke a world in which all the people are wayward, headlong, acting before thinking. After Merida humiliates three ludicrous suitors from three different clans competing for her hand, she gallops off and sees a magical glowing orb called a will-o'-the-wisp that leads her to the house of an enterprising witch who sells her a spell. I can't tell you what that spell does — it's a major spoiler — but the rest of Brave consists of Merida trying to undo it and prevent a potentially fatal disaster. 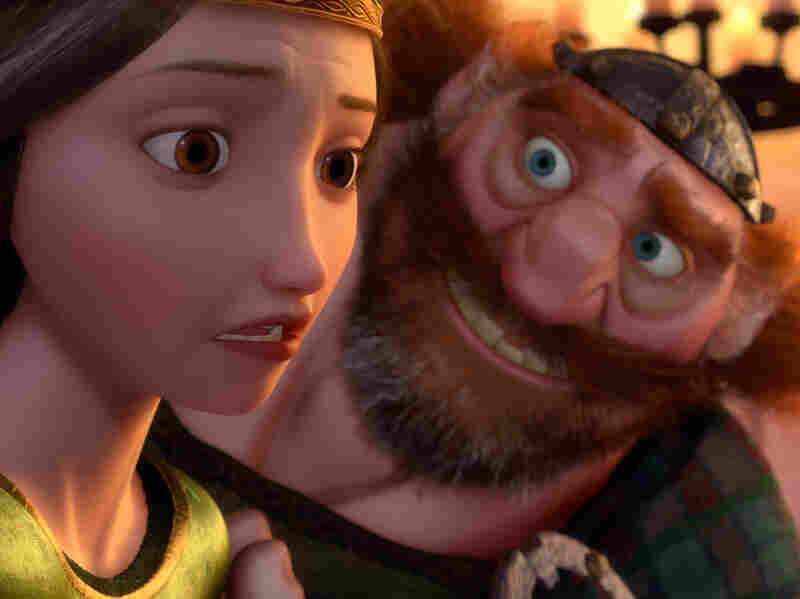 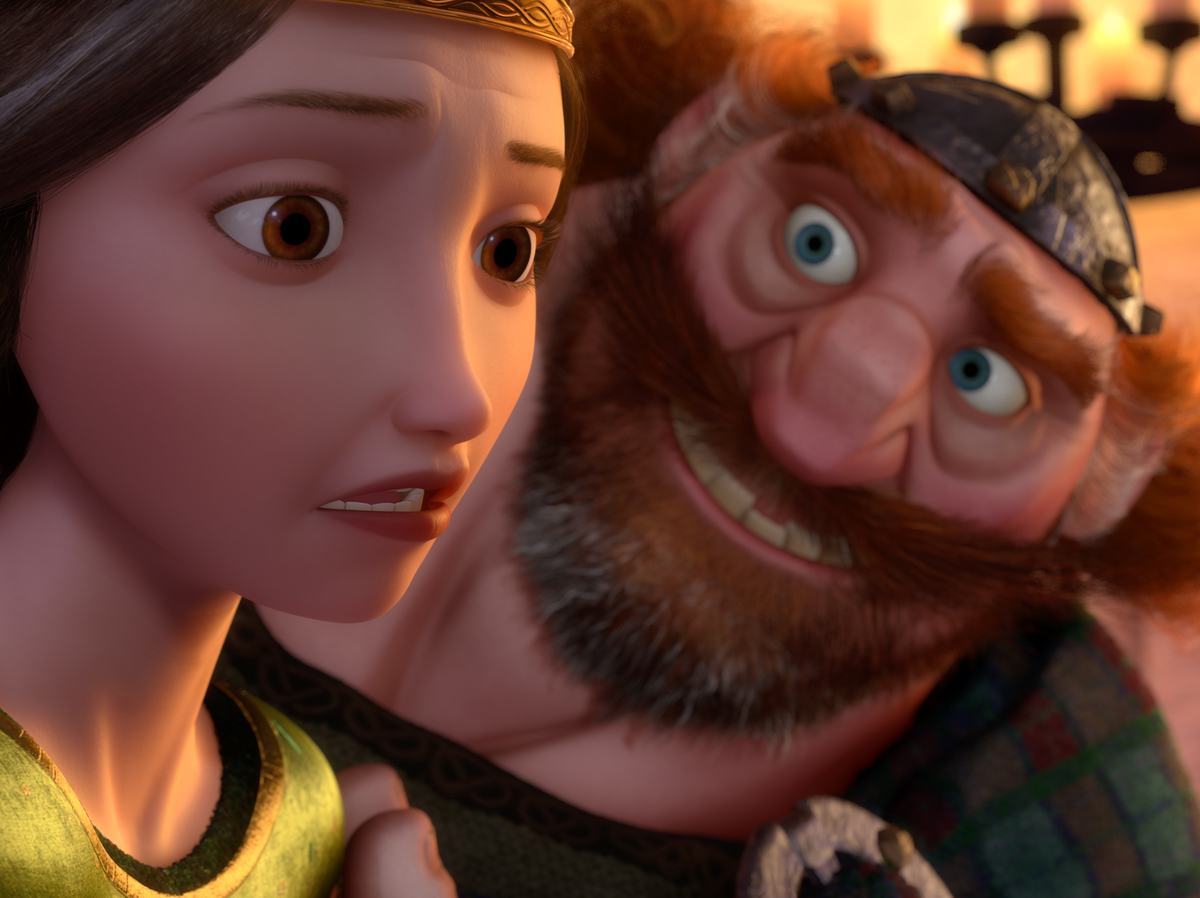 The film has three directors, Mark Andrews, Brenda Chapman, and Steve Purcell, and my tam-o'-shanter is off to them for a second half in which farce, suspense, and surprising sentiment are in perfect balance. You can detect the influence of the great Japanese animation director Hayao Miyazaki in those will-o'-the-wisps and in the central idea of a misunderstood child who wishes a parent would change and then has to use all her wits and strength when the parent changes too much. But Brave is pure Pixar in its mischievousness and irreverence and the brilliantly delineated facial movements of its characters — with Kelly MacDonald an inspired choice for Merida, her voice both melodious and edged with exasperation.

Some Hollywood commentators have pointed to the previews for Brave and the recent, poorly-received Cars 2 to wonder if Pixar is losing its edge and becoming more formulaic. True, Brave is not as groundbreaking as the last two Toy Story pictures, Finding Nemo or Ratatouille. But it's fast, funny, and unpretentious, its message more powerful for its lack of stridency. Merida wants nothing more than to control her own fate, her rage provoked by her mother's refusal to see the world through her eyes. Her cataclysmic attempt to change her mom's mind at least has the effect of giving them both a common cause and spares Merida the kind of estrangement that nowadays would lead to thousands of dollars in therapy.