Accessibility links
Some Immigrant Students Still Dreaming Of Clarity One question left unanswered by President Obama's immigration action was what the policy change will mean for students. In Georgia, where illegal immigrants are banned from attending five public colleges, one professor says she worries students could identify themselves and end up at risk. 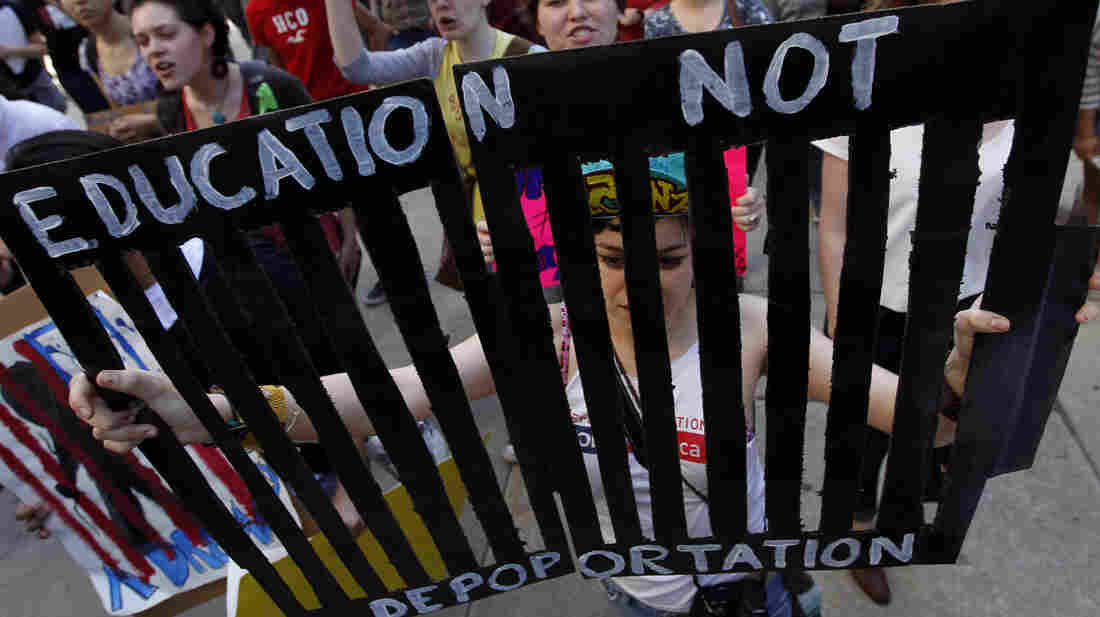 Jovanna Hernandez carries a sign in support of young illegal immigrants during a protest march, which concluded in front of the U.S. Immigration and Customs Enforcement office in Philadelphia in March. Alex Brandon/AP hide caption

One question left unanswered by President Obama's announcement last week that he would stop deportations of some young illegal immigrants was what the policy change will mean for students.

Professors and students are wondering whether the changes Obama announced will really help them. The president's executive action defers deportations for illegal immigrants who are 30 or under and meet certain conditions, giving them the ability to apply for a work permit.

While some in the Latino community are celebrating the president's announcement, others say its effect on education is murky.

Georgia bans illegal immigrants from attending the state's five most prestigious public colleges, including the University of Georgia. Kaplan says it's unclear whether schools will begin accepting these students again.

"I don't see any element that would put pressure on the schools in Georgia to lift the ban, but I think we have to wait and see," says Kaplan.

Another concern is that state and local officials will have discretion as to whether illegal immigrants who meet the criteria will get deferred status. University of Georgia professor Lorgia Garcia-Pena says she worries students could identify themselves and end up at risk.

"A student could apply for this and still get deported. There's no process of appeal. There's no guarantee that the person that applies for this ... will receive it. It's really very vague," Garcia-Pena says.

A University of Georgia spokesman says the school will look to the state Board of Regents for guidance on Obama's directive. The board says officials are examining the implications.

State Sen. Barry Loudermilk, a Republican, supports banning illegal immigrants from attending all public colleges in Georgia. He says even if students get deferred status as the president has suggested, that doesn't mean they are legal residents.

"I think that's something that ... we're going to have to take a close look at," Loudermilk says. "And will the state stand up and say, 'We're still not going to do this'? So does it really become law? In my opinion, it does not."

Taxpayers are subsidizing public colleges, Loudermilk says, so that benefit should not go to students who are illegal immigrants. 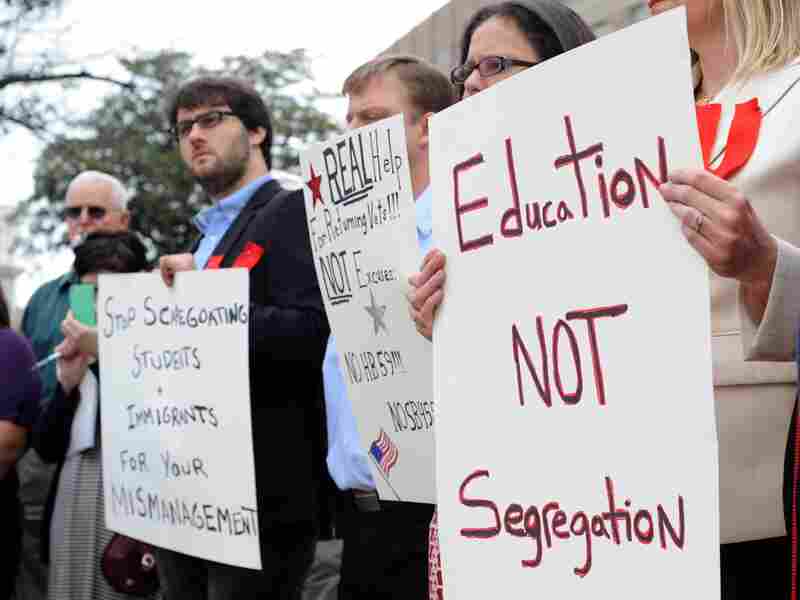 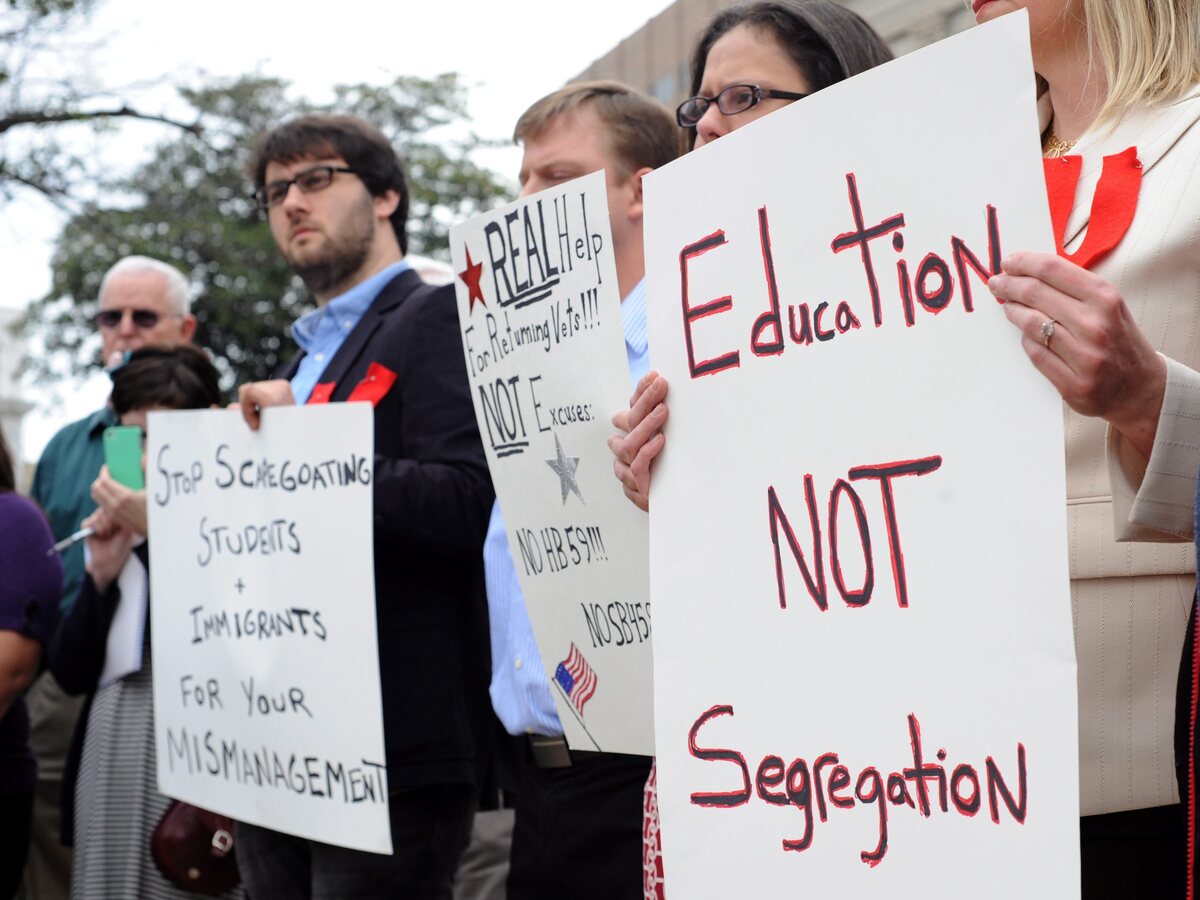 Demonstrators rally in February in opposition to a bill that proposed banning undocumented students from attending public higher education institutions in Georgia.

South of Atlanta in Griffin, Ga., Gustavo Madrigal is cleaning up dishes in the home his family rents. He came to the U.S. from Mexico when he was 9 and is undocumented.

"I never really knew what it would mean for me in college," Madrigal says.

Madrigal was a good student in high school, with a 3.9 average his junior year. He found out in 12th grade, he says, that he wasn't eligible for most scholarships.

"I don't think education should be about immigration status. It should be about merit. And I mean, the University of Georgia — I could have made a huge contribution to it by going there and studying there," he says.

Now 20, Madrigal is with the Georgia Undocumented Youth Alliance, a group lobbying for passage of a bill that would allow a pathway to citizenship. He says this latest White House announcement is not enough.

"We don't want people to end [up] working at McDonald's the rest of their lives, you know. Not that that's not respectable but, you know, there's just so much potential with our community that it would be a shame to see it go ... to waste and nothing happen with it," Madrigal says.

Another undocumented immigrant, Keish Kim, 20, came to the U.S. from South Korea when she was 8. She graduated from high school but is also unable to attend college here despite good grades.

"We've been delaying and putting thousands of people on a limbo state for over a decade," she says.

"I definitely don't want to belittle President Obama's step, [his] courage to stand up and announce that memo, but I think we have to be cautious. I am cautious about it and very hesitant," Kim says.

Kim says students want to see concrete action that would allow them to pursue their education legally. She worries the directive could be overturned if Obama is not re-elected.