Accessibility links
40 Years On, Title IX Still Shapes Female Athletes The landmark Title IX changed the face of women's sports, becoming the most recognizable part of the federal legislation signed into law on June 23, 1972. But its guarantee of equal access in student athletics has not always played out, and the law has its critics. 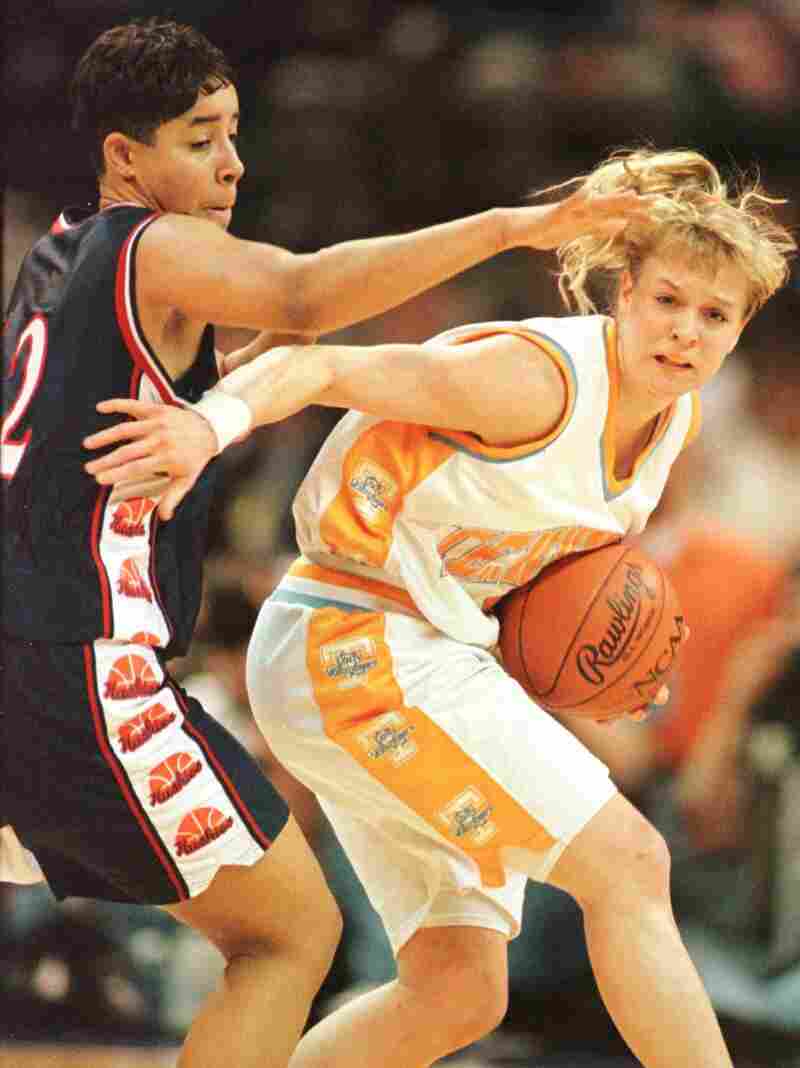 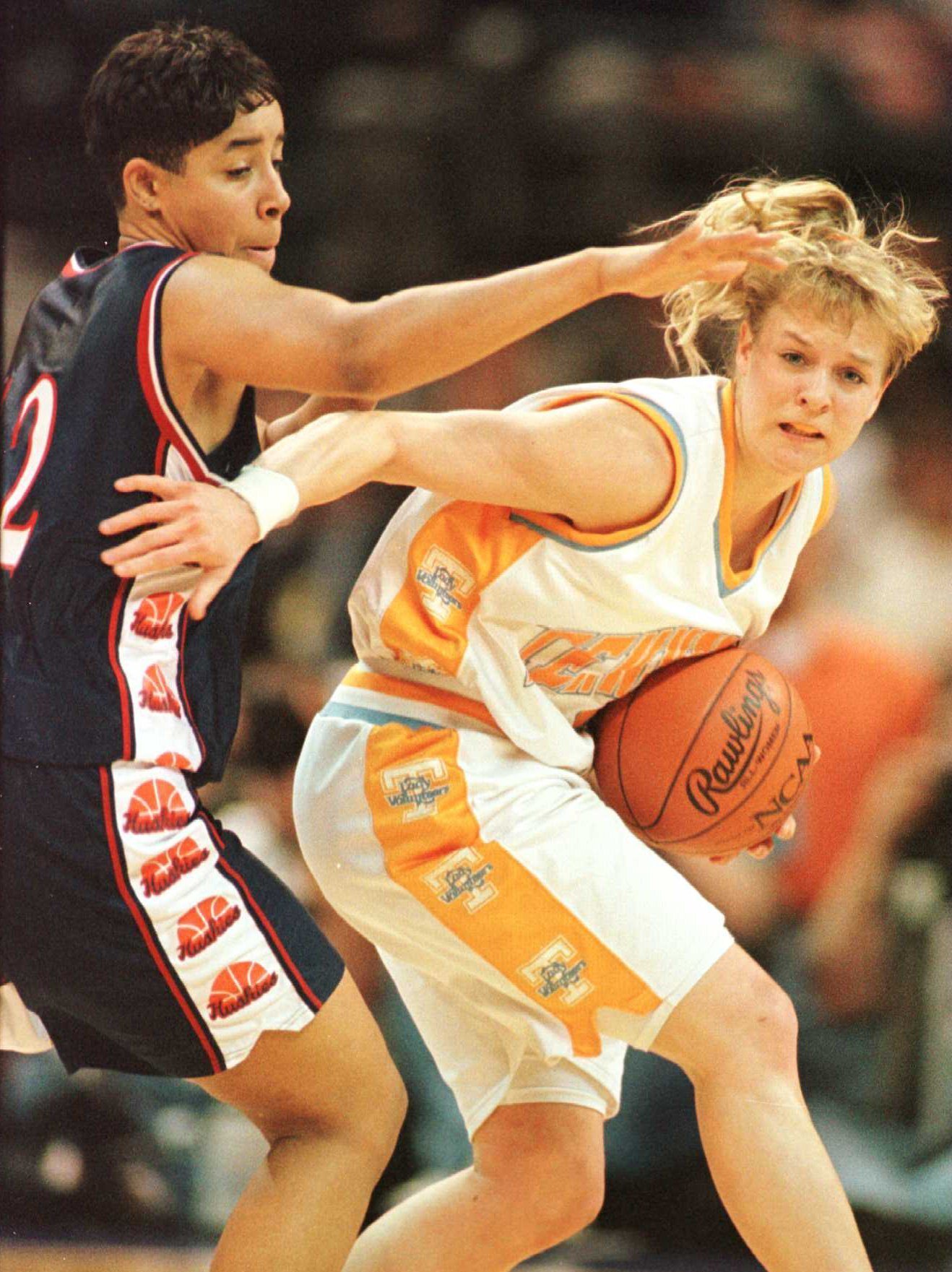 Michelle Marciniak (right) of the University of Tennessee Lady Volunteers attempts to elude the defensive pressure of Nykesha Sales of the UConn Huskies during the 1996 NCAA Women's Final Four.

Its guarantee of equal access to sports was a small part of the original legislation. But it's become the most recognizable part of Title IX. That guarantee has not always played out, and the law has its critics. For four decades, however, it's played a huge part in shaping lives.

'I Can Handle This World'

Even today, when Bernice Sandler beams with pride, watching women athletes walk, as she describes, "with their heads up and feeling like, yeah, I can handle this world," there's part of her that laughs, too.

Back in the late 1960s, when Sandler, a career educator, and other Title IX pioneers said enough with sex discrimination in education, she really wasn't thinking about a sea change in sports.

"I remember saying, 'Isn't this great news? On field day [when schools cancel classes and students participate in athletic relays and other outdoor games] ... there's going to be more activities for girls,' " Sandler recalls.

It was a time when sports was still a man's world, and it was difficult to even imagine the iconic moment of women's sports that would take place three decades later.

What Is Title IX?

Banning sex discrimination in sports may be one of Title IX's most notable achievements, but the original federal legislation that President Nixon signed into law as part of the Education Amendments of 1972 actually doesn't mention sports or athletes.

The first part of the law reads, "No person in the United States shall, on the basis of sex, be excluded from participation in, be denied the benefits of, or be subjected to discrimination under any education program or activity receiving Federal financial assistance."

In addition to unequal opportunity in student sports, discrimination covered under Title IX includes sexual harassment of students, unequal pay for female teachers, and discrimination against pregnant students. Title IX does not apply to fraternities or sororities, voluntary youth service organizations like the Girl Scouts and Boy Scouts, and "educational institutions of religious organizations with contrary religious tenets."

On July 10, 1999, as Brandi Chastain prepared to take the last penalty kick of the 1999 Women's World Cup soccer final, she was not thinking about the moment as a watershed in women's sports or about the record 90,185 fans at the Rose Bowl in Pasadena, Calif. Like any good athlete, Chastain was focused on the task at hand — make good contact with the ball, don't let the goalkeeper for China stare you down and psych you out.

She didn't. And the picture of a celebrating Chastain — shirt ripped off, fists clenched, muscles flexed — has become a Title IX touchstone for women and girls — and at least one 6-year-old boy. Chastain's son Jaden sees the photo every day, hanging in his house.

"He used to sing cute little songs," Chastain recalls. "You know, 'Jaden is the silliest' or 'Nana is the happiest.' And I would say, 'Daddy is the strongiest,' and he goes, 'No, Mom. You're the strongiest.' "

With 'Title IX' On Their Backs

It was anything but a straight line from Sandler's hopes for field day to Chastain's "strongiest" moment. Along the way, and to the present, there's been a kaleidoscope of characters and events weaving a Title IX tapestry.

In 1976, four years after Title IX became law, Ginny Gilder and her rowing teammates at Yale University were getting sick. There were no shower facilities available right after practice, and they'd have to get on a bus, cold and wet.

The men had showers. So Gilder and her teammates staged a naked protest in a school administrator's office. "We all turned around, took off our clothes and stood there naked, with 'Title IX' on our backs," Gilder remembers.

Team Captain Chris Ernst read a statement, as recounted in the documentary film A Hero for Daisy: "These are the bodies Yale is exploiting. On a day like today, the ice freezes on this skin."

The words and protest were persuasive. The women got their showers, and schools that ignored Title IX got a reminder: don't. And Gilder got something personal. 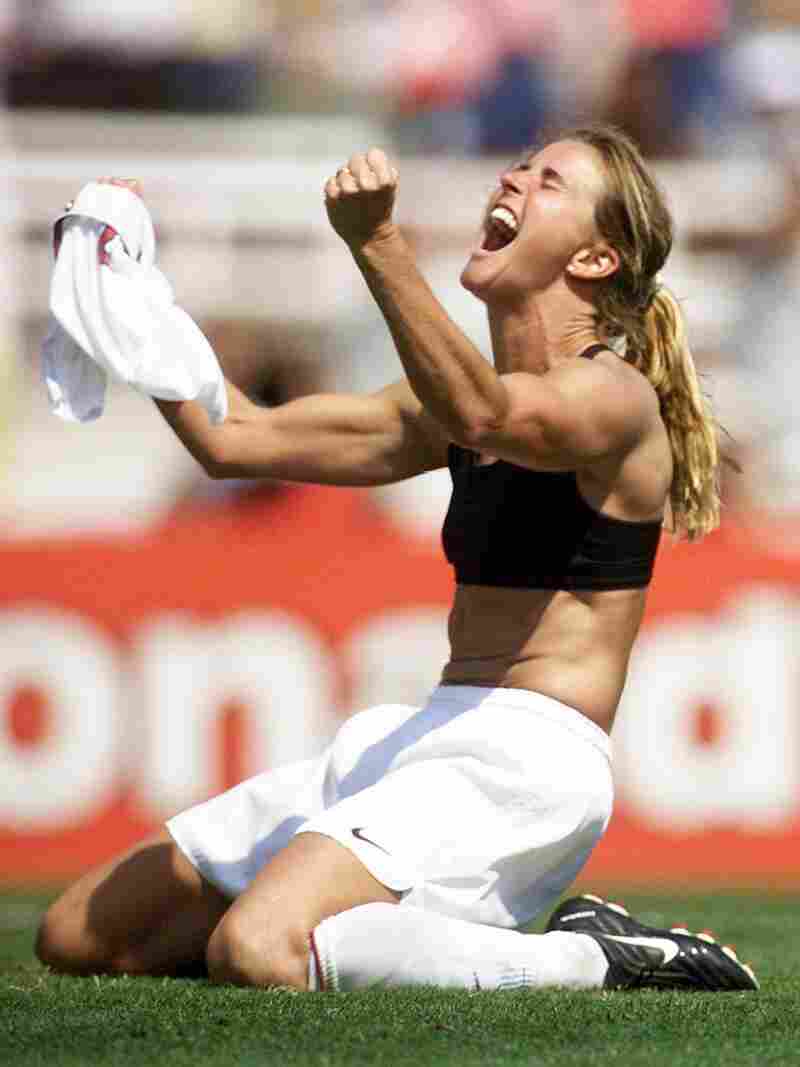 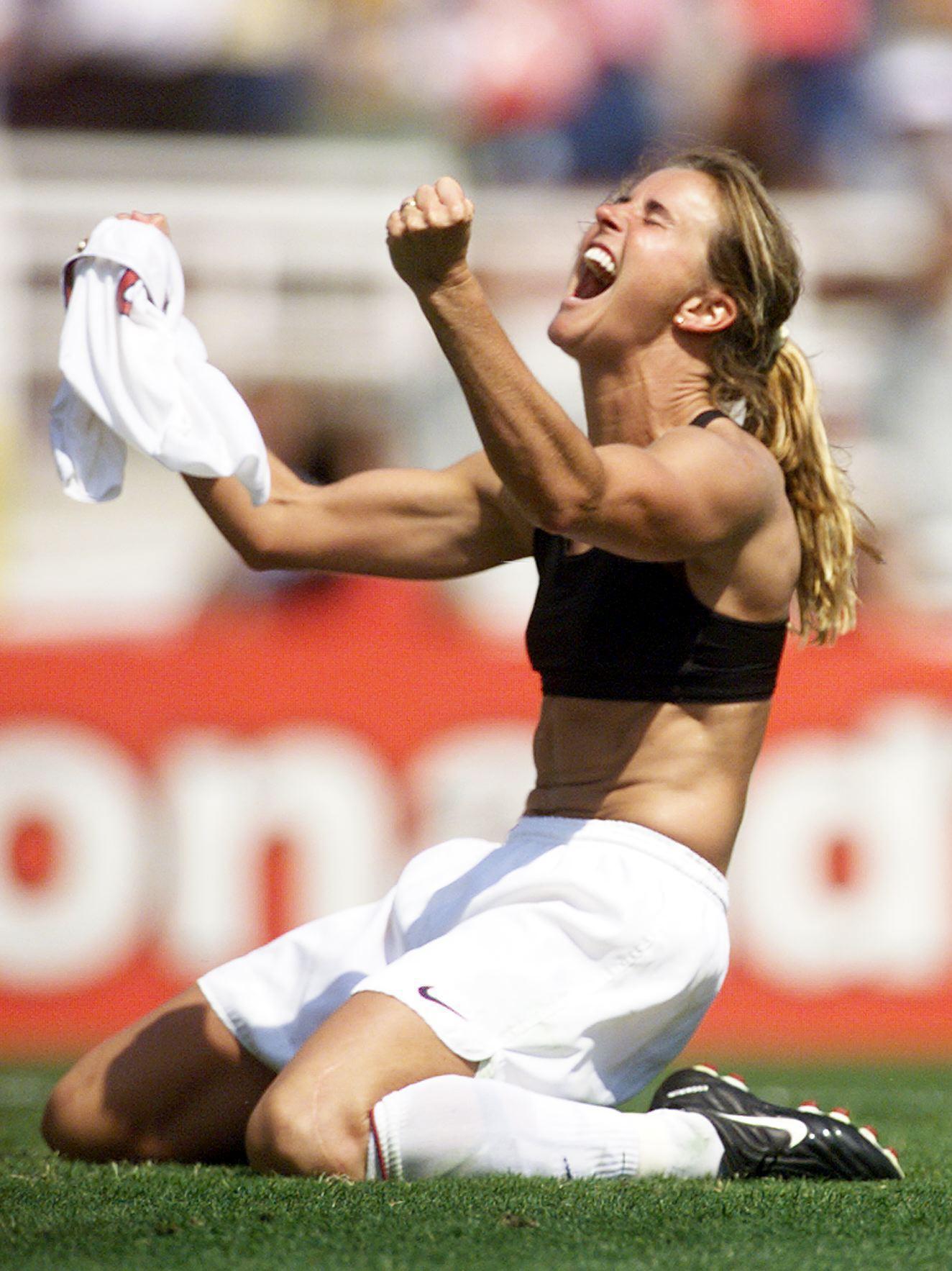 Brandi Chastain celebrates after kicking the winning penalty shot to win the 1999 Women's World Cup final at the Rose Bowl in Pasadena, Calif., in 1999.

"You know, it's a certain outing of oneself to take a stand," she says. "And there's no going back once you do something like that. There's no place to hide."

Hiding was never an option for Michelle Marciniak. She was an uber-jock as a kid growing up in the 1980s. Her only real competition in soccer, baseball and especially basketball was with boys — until she realized she couldn't win the battle against testosterone.

"There is a ceiling," Marciniak says. "I mean just talent-wise, pure physical ability [and] strength."

Marciniak says it was then that she truly appreciated Title IX and the chance to keep excelling in basketball. She later played for the University of Tennessee Lady Volunteers and Hall of Fame head coach Pat Summitt. Marciniak was the starting point guard on the 1996 National Championship team and went on to play in the WNBA.

Today, as co-founder of SHEEX, a company that makes bedsheets out of athletic fabrics, Marciniak says she draws on her sports background daily. "There's not a boardroom that I've been in, there's not a man who I've been in front of in the business world that doesn't know basketball," Marciniak says. "I'll talk basketball as far as the day is long with anyone ... and I think there's a certain amount of respect that guys give you if you can talk sports with them."

When you use my tax money to enforce your bias, and when your bias is a sexist pig's bias, then you and I are going to a barbecue pit!

Liberty University has cut men's wrestling twice, most recently last year, when it was demoted from NCAA Division I status to a club sport. "It felt like I had a sibling die," says Knowles, who had always dreamed of ending up on the podium at the NCAA tournament.

"Right away [when men's wrestling was reclassified as a club sport], that's what I was thinking about — that my last shot had just been taken away," Knowles says.

Whether the cuts are Title IX's fault still, on its 40th anniversary, is a topic of debate. But it doesn't deter Herb Dempsey, a 75-year-old grandfather from Battle Ground, Wash., who calls himself a "nasty old man" and is one of Title IX's strongest, and unlikeliest, supporters.

Dempsey, a former teacher with some law enforcement experience on his resume, has made Title IX enforcement his latest career — or at least an active hobby in retirement. He uses Google Earth to identify shoddy sports facilities. He's lost count of all the Office for Civil Rights complaints he's filed over the past 20 years, dealing with girls' sports getting cut or shortchanged.

"Everybody has biases. It's healthy. It's good. We're born with them. They give us a value system," Dempsey admits. "But when you use my tax money to enforce your bias, and when your bias is a sexist pig's bias, then you and I are going to a barbecue pit!"

Dempsey's fight continues and is emblematic of the challenges still facing Title IX after 40 years, such as the need for stronger enforcement, more sports opportunities for minority girls and women, and ensuring that compliance does not dash dreams for male athletes.

There are also those small moments on the field or court that continue to challenge equality. On the golf course the other day, a guy who every time one of his putts rolled up short of the hole would say, "Hit the ball, Alice." It's the kind of low-grade insult that a lot of men never think twice about uttering. But 40 years after Title IX, it's out of date, because it's a good bet that Alice is "strongier" than you think.