Accessibility links
Sync Or Swim: Olympic Duet Practices Togetherness Only two members of the U.S. synchronized swimming team are going to London for this summer's Olympics. The pairing is fairly recent — they even used to be rivals — but some of their competitors have been swimming together since childhood. 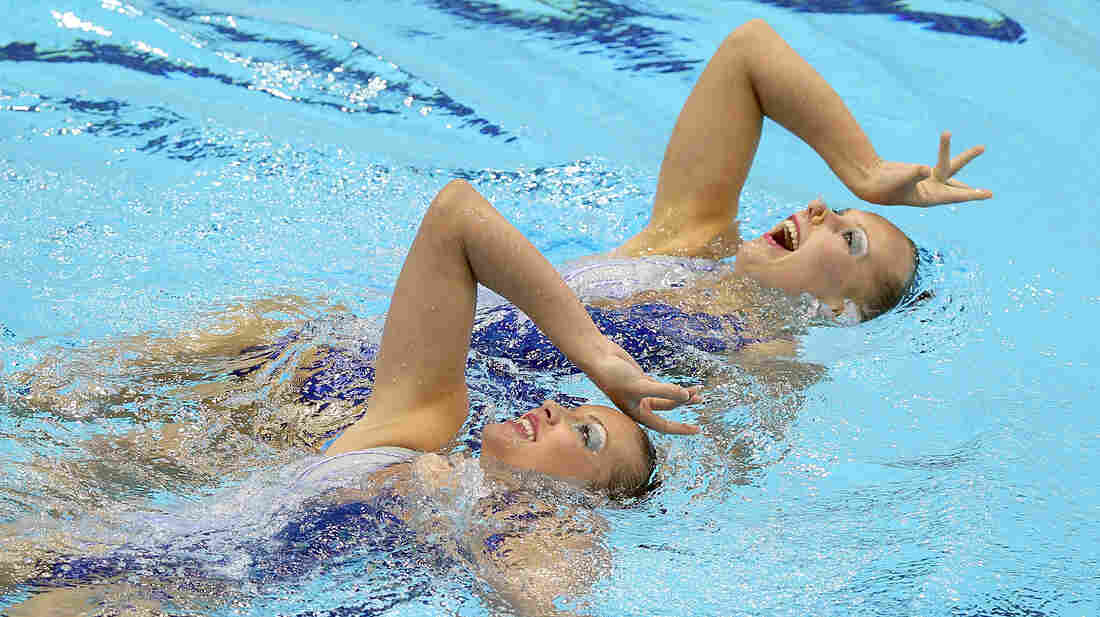 Mary Killman and Mariya Koroleva of the U.S. compete in the Olympic qualifiers in April in London. They'll compete together in the Olympics this summer. Clive Rose/Getty Images hide caption

Mary Killman, 21, and Mariya Koroleva, 22, became roommates early last year, training with the national team in Indianapolis. Previously, they had competed against each other in the San Francisco Bay Area.

Last August, they were paired to compete as duets just six weeks before the Pan American Games, the first Olympic qualifier. They stunned competitors by taking home a silver medal there.

On the front porch of their small downtown apartment, Koroleva says their early success is encouraging.

More From Our Olympic Games Series

"That was our first time swimming together as a duet, so I think we just kind of wanted to show ... we're going to be good," she says. "We just got paired together, we're on the rise ... kind of like, watch out."

But former Olympic duet competitor Christina Jones says it's going to take a lot more than spirit and long training hours for the women to do well in London. A competitor in Beijing in 2008, Jones performs for Cirque du Soleil in Las Vegas now. Jones competed with both women on top rival teams in California and says while they faced stiff competition there, it's entirely different competing on the world stage.

"In countries like China and Russia, girls are paired up from childhood, and they are trained specifically for this event," she says. "The Russian duet in 2008 ... Anastasia Ermakova and Anastasia Davydova ... were swimming together since they were little, little girls."

Killman and Koroleva's coach, Mayuko Fujiki, took home a bronze for her native Japan in 1996 and coached Spain to two silver medals in 2008. She's encouraging the women to do everything they can to catch up, even if it means being together day in and day out.

Like it or not, Killman and Koroleva are spending nearly all their time together, trying to master their routines.

Eight-hour practices now stretch to 12 hours. In between, they drive together to weight training, yoga and Pilates.

"We do go through ... our ups and downs, but I feel like we've handled it pretty well," Koroleva says. "You know, I think we both still know that in the end we have to do this together."

Both athletes say they know this is the chance of a lifetime, and hope all these long days of togetherness will pay off in London.