Accessibility links
Shirley Clarke's 'Connection': Will It Click At Last? When it was released in the early '60s, Shirley Clarke's controversial film about heroin addicts got shut down by New York police after two screenings. Now, a half-century later, audiences get a second chance to see the newly restored movie in theaters. 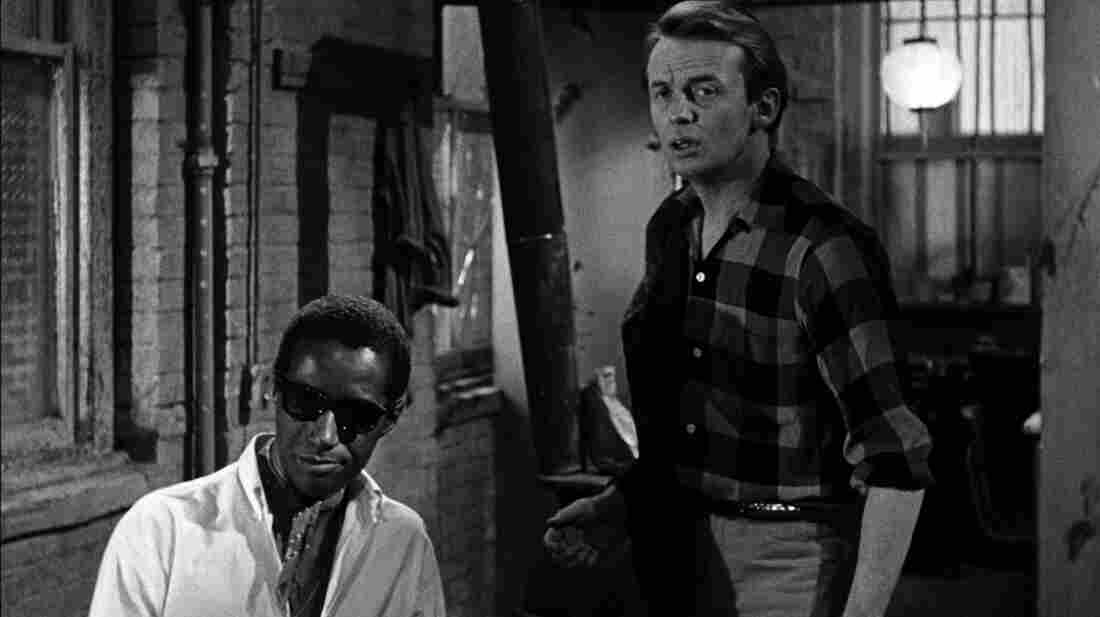 In The Connection, Leach (Warren Finnerty, right) and his friends wait around for their heroin fix, which eventually comes courtesy of Cowboy (Carl Lee). The controversial film was shut down in New York after two screenings in 1962. Milestone Film hide caption

Fifty years ago, a movie called The Connection opened in New York — then closed after two showings. Police shut down the theater and arrested the projectionist.

The movie is about drug addicts, and the language is sometimes frank — too frank for 1962 standards. The director was an independent pioneer named Shirley Clarke, whose movie has been restored and is back in theaters, soon to be followed by restorations of nearly all her work.

From 'The Connection' - 'Two Solos'

The Connection started out as an Obie Award-winning play written by Jack Gelber and premiered in 1959 at The Living Theatre. Like all the groundbreaking troupe's work, it was provocative — an unapologetic look at a group of heroin addicts waiting together in a seedy apartment for their dealer to arrive with a fix. One character panhandled the audience in the lobby. Often characters heckled the audience from the stage.

"I was one of those guys in the play who shouted at the audience: 'You don't want to know me,' " says Garry Goodrow. He portrayed an insecure horn player named Ernie, who's hocked his horn to pay for drugs.

Like most of the play's cast, Goodrow repeated his role in the film adaptation. Clarke, an experimental filmmaker undertaking her first independent feature film, kept the play's confrontational tone. Characters address the camera with defensive confessions and growing hostility.

"Like I only care to play — a little dope makes life enjoyable," says sometime musician Ernie in the film. "Right. Well I play the same with or without it, that's the truth." When the other addicts laugh knowingly, Ernie continues. "And no jive mother's gonna change me either, man."

The Four-Letter Stone That Sank 'The Connection'

Each actor gets his own solo, just as the jazz musicians in the cast get theirs. The actor solos are in the form of monologues delivered as they all wait, egged on by two characters created for the film — an aspiring white documentary filmmaker who's "just trying to make an honest human document," and his cameraman, a cynical black man unimpressed by his boss's bogus attempts to seem hip. 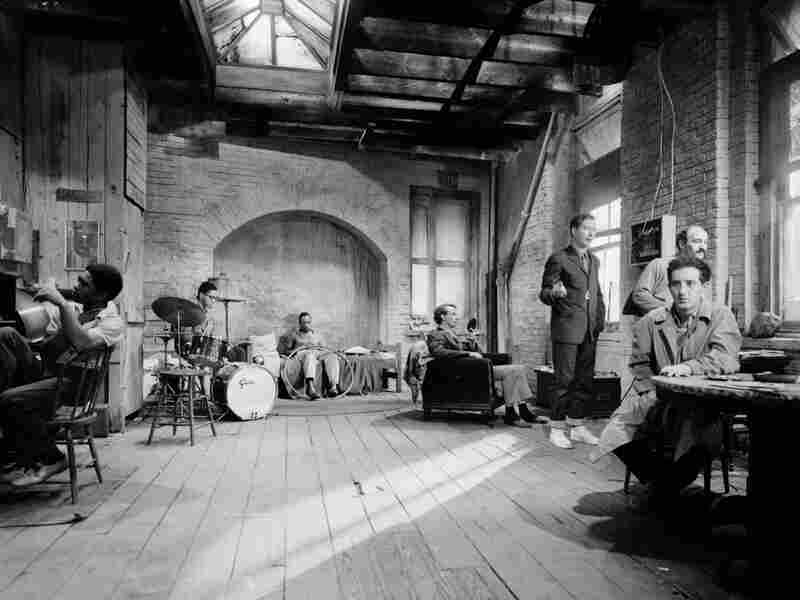 The set of The Connection with much of its cast. The film included a four-piece jazz band, assembled by pianist Freddie Redd, playing and soloing throughout. Richard Sylbert, Albert Brenner/Milestone Film hide caption 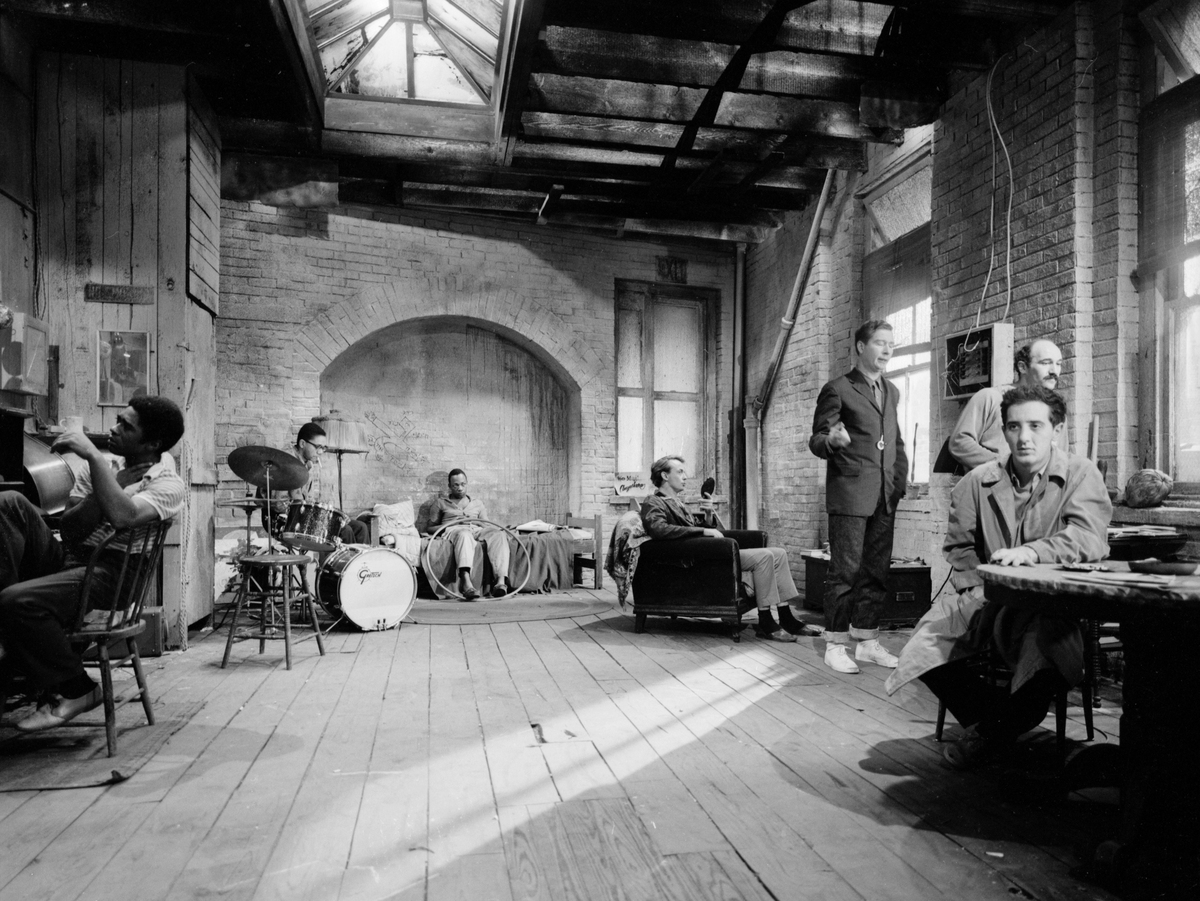 The set of The Connection with much of its cast. The film included a four-piece jazz band, assembled by pianist Freddie Redd, playing and soloing throughout.

The movie also retained the notorious language of the play, recalls Goodrow. "I don't know if I could use this word," he says. (And, no, you still can't and not get bleeped.)

"One of the critics, using his little counter, I guess, counted 50-some times during the course of the film that the word" — a four-letter slang term for either bodily waste or drugs — "was used."

The number was 28, as reportedly counted by Variety. NPR counted about a dozen — but whatever the number was, it was quite enough for the film to be declared out of bounds by the division of New York's Board of Regents that decided whether films were obscene.

The board was the last in a long line of agencies given the power by New York legislators to approve or disapprove of every film seeking to open in a commercial theater. No movie could open legally without a license issued by the board, and it refused to issue one for The Connection, citing the word in question and a glimpse of a magazine with nude photographs.

Clarke's production company challenged the decision in court, noting that the word was used in The Connection as slang for drugs rather than as an expletive. They won an appellate court ruling, but the Board of Regents still would not issue the license. So the producers opened the film as a civic protest — and it was promptly shut down by police. (The theater owner, expecting them, locked the projection booth as a precaution; he managed to screen the film twice before the police arrived.)

New York filmgoers had no opportunity to see the film until the board exhausted its appeals weeks later. Again, the producers of The Connection won, and the film resumed its run. But by then the publicity had died down. And it didn't help that the New York Times critic had panned Clarke's film, even though it had already won a critic's prize at the Cannes Film Festival and had been shown at the White House. The Connection seemed doomed to an obscure corner of film history.

But the film's musical score helped keep it alive. An album was released, and jazz fans collected it, because the LP was all that was generally available of this mysterious movie about junkies that featured acclaimed saxophonist Jackie McLean.

McLean was part of a quartet that pianist and composer Freddie Redd assembled for the stage production and carried into the film. The musicians were part of the cast, as well as providing a score right from the stage. McLean himself struggled with drugs, but Redd remembers he was a cutup on stage. There's a moment in the play when someone says the police are coming. In the script, they weren't supposed to show up. Redd says one night they did.

"A knock came on the door," says the soft-spoken Redd, "and when the gentleman who was the head actor [playing the character] Leach, he opened the door, there was a real uniformed policeman there. Jackie McLean had gotten the policeman on the beat to come up and stand there. So we all thought we were being busted."

It was a joke with an edge for some of the musicians. McLean had lost his cabaret license to perform in New York after a bust. Redd had lost his, too. Both found the play and the film to be a welcome source of income while they waited for reinstatement of legal permission to perform in concert or in clubs. 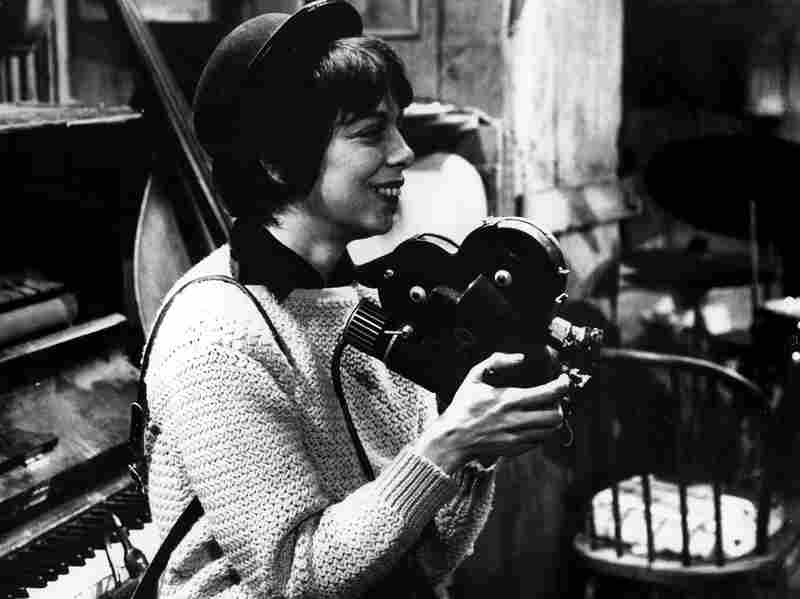 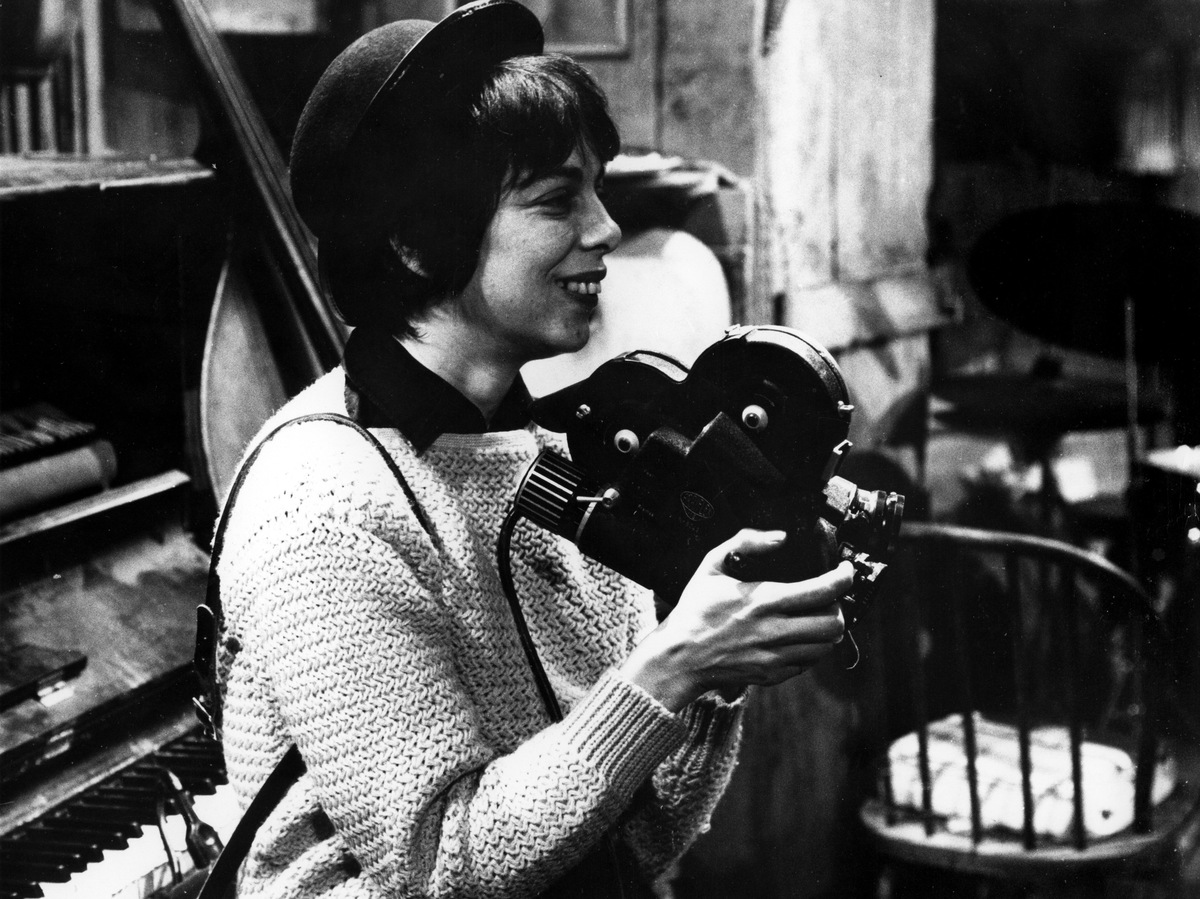 Shirley Clarke, the director of The Connection, had strong ties to New York's independent film scene. She lent John Cassavetes equipment for his first film.

An Oscar Winner 'Always In Motion'

Freddie Redd says Shirley Clarke didn't let the actors get away with much.

Clarke's career was always in motion, too. A former dancer, she started in filmmaking by trying to capture modern dance on film, then moved into experimental shorts and unconventional documentaries. Her 1963 film Robert Frost: A Lover's Quarrel with the World won an Oscar. She ventured into experimental feature films that were hybrid blends of documentary and scripted work, very much ahead of their time.

Clarke: "I was not above using feminine wiles"

Viva Hoffmann: “She was never away from her work!"

She brought the lives of Harlem teenagers to the screen in The Cool World and captured the voice of an out gay man, in Portrait of Jason, when that was rare. She always used her camera to create a startling intimacy with her subjects, putting her audience in the same room — often closer than that. In a 1970 French television documentary, she described this desire to dissolve barriers:

"I think that I've gotten to the point that I believe so much that the audience and the film must be part of something together, and I don't want them separated behind the screen," she says in the film. "But I'm well aware of who my audience is. Most of the time it's the people who already agree with me, which is rather unfortunate," she laughs. "But you know — and I would, I think, really like to broaden that."

An Early Adopter, And An Inspiration For Many

Clarke was part of a tumultuous time in independent filmmaking in New York, when filmmakers had indeed begun to dream of Hollywood-sized audiences — for stories and styles that challenged Hollywood conventions. She was one of the few women involved, but she was an influence and catalyst for many.

John Cassavetes, considered now the dean of American indies, borrowed Clarke's equipment to shoot his first film. The eminent documentarian Frederick Wiseman first became involved with film by investing in The Connection, which was financed by the then-unheard-of sale of limited partnerships. Wiseman went on to produce Clarke's next film, The Cool World.

Clarke, always eager for the next thing, was an early adopter of video, convincing her best friend, Viva — the Warhol "superstar" and video diarist — to switch to videotape in her own work.

Clarke and Viva had many adventures when Clarke lived in a penthouse apartment at the legendary Chelsea Hotel, even getting arrested together in 1971 when Clarke dragged her friend to film an apartment building with a collapsed wall. Clarke couldn't resist shooting the image of a structure that now looked "just like a dollhouse," Viva recalls. She says she's pleased that Clarke's films are going to get their due, even though it's long after the filmmaker died in 1997.

"I'm just sorry that Shirley had to wait until she was dead for so many years — on top of being dead — before she got all this attention for her fabulous genius work," says Viva in her inimitable cadence. "I hope she's watching from heaven. I have to believe in heaven now so that Shirley can see that her work is being appreciated."

'She Broke Just About Every Rule'

That appreciation is mostly the work of Dennis Doros, the film distributor and archivist who's releasing The Connection as part of what he calls Project Shirley. He'll release four of Clarke's features, newly restored by UCLA, in theaters. And many of her short films will be included in an eventual DVD release. They will show, he says, the range and rebellious genius of Shirley Clarke.

"She really wanted to break molds. She really wanted to break rules. And with The Connection, she broke just about every rule you could in film. She played with the idea of what's reality, what's fiction, what you think of people. One of the things that upset people is that these junkies are unrepentant, that there's no tragedy that happens to them. They're not people who have fallen on bad times and regret their lives. There is no regret in these films."

And the woman who made The Connection was unrepentant as well. As Clarke told NPR in 1983, she would have done anything to overcome the obstacles mounted by censors, Hollywood, and men who thought women had no place in filmmaking, independent or otherwise.

Now, for the first time in half a century, everyone has a chance to decide what Shirley Clarke accomplished.