Accessibility links
'Who Would Believe A Kid?' The Sandusky Jury Former Penn State assistant coach Jerry Sandusky, once the heir apparent to legendary football coach Joe Paterno, was convicted of sexually abusing 10 boys over a 15-year period. After the verdicts were read Friday night, his attorney told reporters why Sandusky didn't testify on his own behalf. 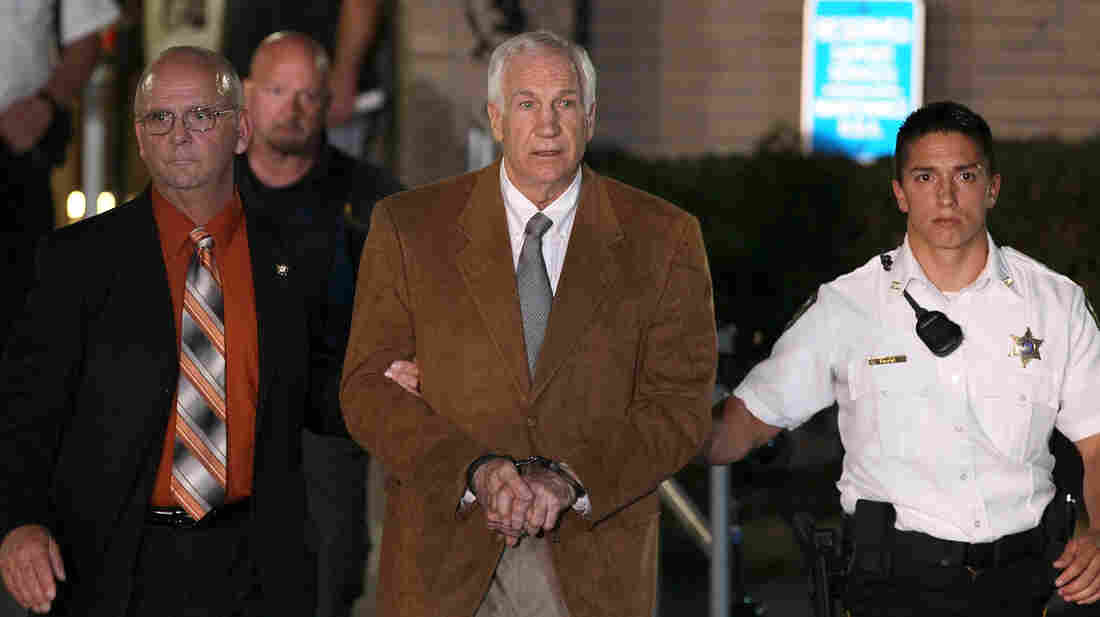 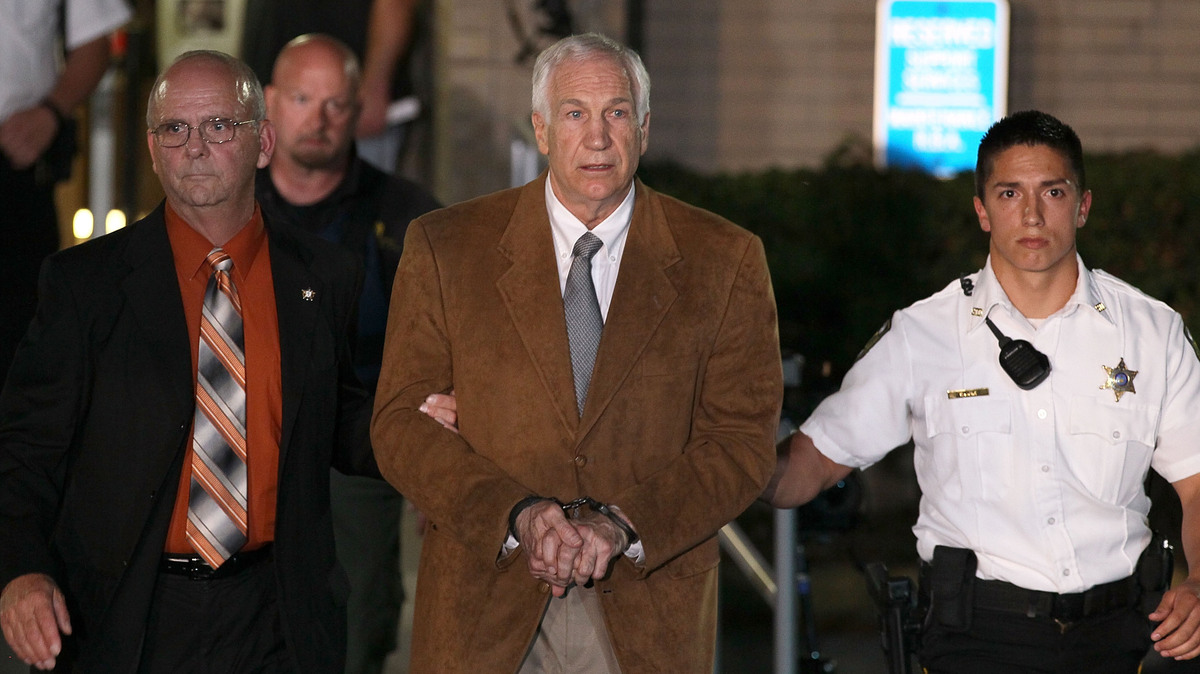 Former Penn State assistant football coach Jerry Sandusky spent what could be the first of many nights behind bars Friday after a jury found him guilty of sexually abusing 10 boys over a 15-year period.

In Bellefonte, Pa., Friday night, a crowd outside the county courthouse cheered when the guilty verdicts were announced.

The cheers continued as Pennsylvania Attorney General Linda Kelly praised the investigators and prosecutors at her side.

"I also want to offer my most sincere thanks to all the young men — the victims in this case — who came forward to bravely testify during this trial," she said.

Sandusky was found guilty of 45 out of 48 counts. Kelly says she hopes the convictions will help victims.

"One of the recurring themes of the witnesses' testimony, which came from the voices of the victims themselves in this case, was, 'Who would believe a kid?' And the answer to that question is, we here in Bellefonte, Pa., would believe a kid," she said.

The charges against Sandusky were at the heart of a scandal that hit the Penn State campus last fall and resulted in the firing of the university's legendary coach Joe Paterno. Paterno, 85, died in January after a battle with lung cancer.

Even before the verdict was read, it seemed clear the Sandusky family was expecting bad news. Sandusky's wife, Dottie, appeared to fight back tears even before the jury entered the room to announce their verdicts.

Earlier in the day, Sandusky's attorney, Joe Amendola, held an impromptu briefing with reporters and said he would probably die of a heart attack if the jury came back with an acquittal.

In front of the courthouse after the verdicts were read, Amendola explained one big question — why Sandusky didn't testify on his own behalf. Amendola says there was a surprise development involving Sandusky's 33-year-old adopted son, who contacted prosecutors during the trial.

"Matt Sandusky had ... contacted them late Thursday afternoon, then made a statement to them Thursday evening, indicating that Jerry had abused him years earlier," Amendola said.

Amendola said if Sandusky took the stand, prosecutors would then have called his son to testify.

"To put Jerry on the stand — to set him up to have Matt come in to this jury and testify against him, would have absolutely destroyed whatever chances he had at acquittal," he said. 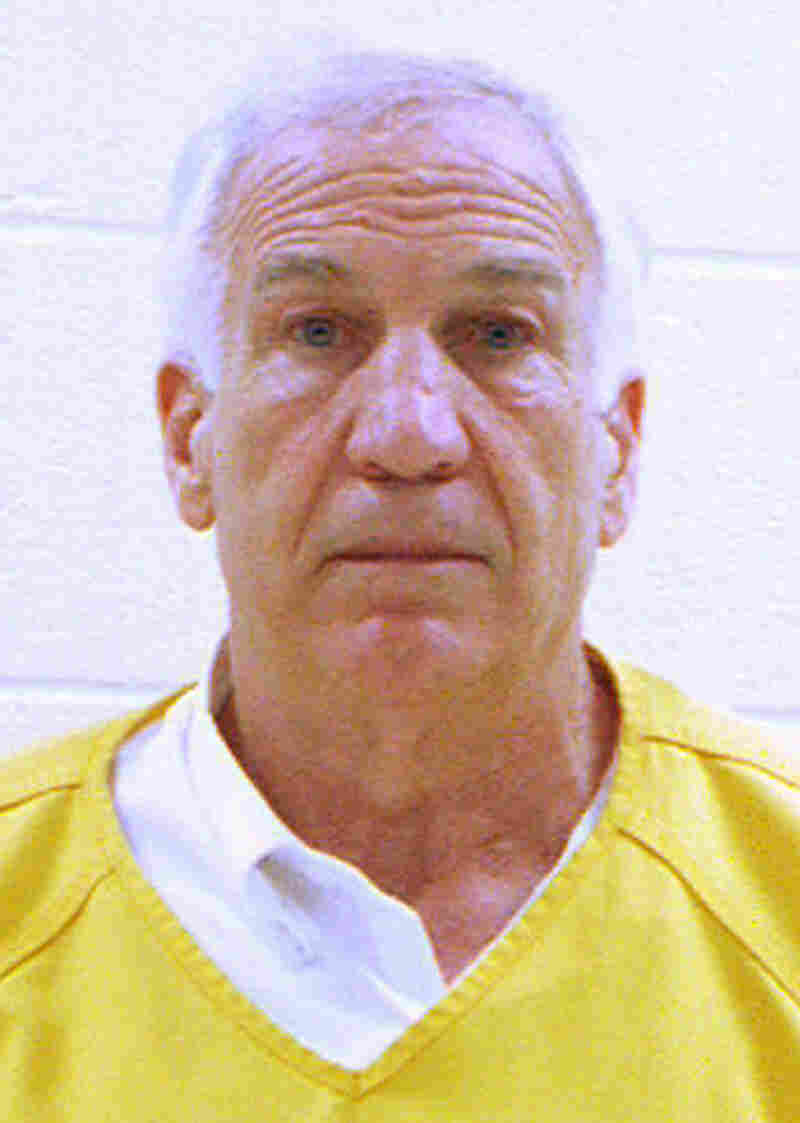 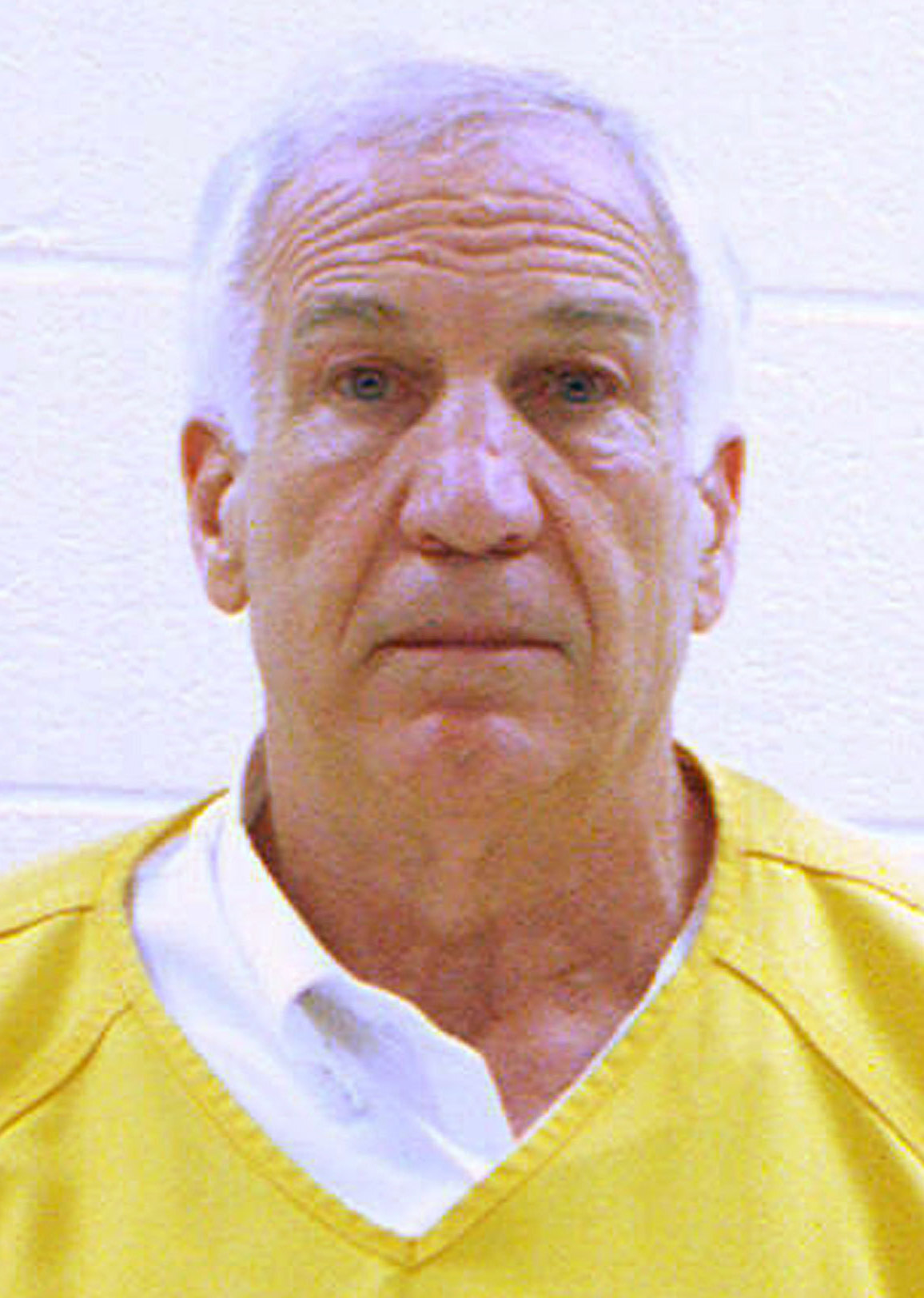 The verdict means Sandusky, the man once considered a successor to coach Joe Paterno, will likely die in prison.

Sandusky was taken into custody at the courthouse and driven to Centre County's jail. Sentencing will take place in about 90 days. Amendola said Sandusky faces a long time in prison.

"Essentially, the sentence that Jerry will receive will be a life sentence, just due to the length of it," he said.

Several hundred people showed up at the courthouse to hear the verdict.

"I'm very happy. I'm excited. I teach martial arts, and I teach about 36 students — ages 5 through 12 — and I make sure that they know about predators and not to trust people," Aida Campbell said.

Campbell's husband, Bill, is an adjunct faculty member at Penn State. He also was pleased with the verdict.

"But it should not be a reflection on the university and the people that work there, the people that go to school there," he said. "This is one evil man who did some evil things."

Such strong reactions came from all around — except from Sandusky himself. As the verdicts were read, and then as sheriff's deputies escorted him out of the room, he had no visible reaction to what had just happened.