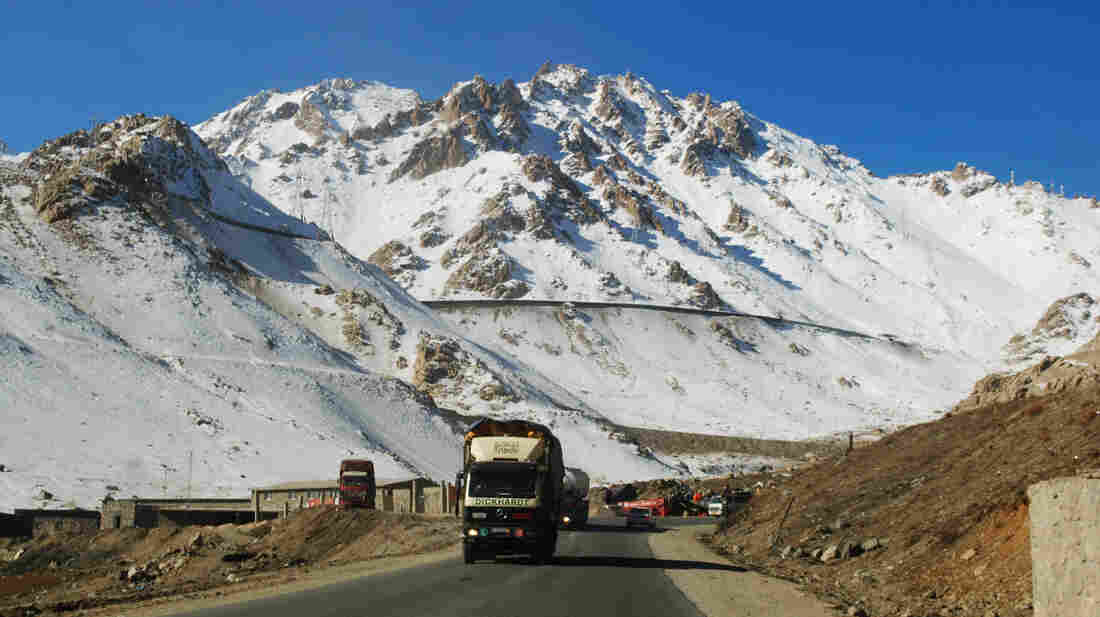 A truck drives down a highway on Salang Pass in Afghanistan's Parwan province in December. The Salang Tunnel, which crosses under the pass, provides a vital link between Central Asia and northern Afghanistan to Kabul. Qais Usyan/AFP/Getty Images hide caption

The U.S. military says it's spending an extra $100 million a month on the war in Afghanistan since Pakistan closed its border to NATO supply convoys. Now, NATO is using a route thousands of miles longer through Russia and Central Asia.

That route passes through Afghanistan's perilous Salang Tunnel, 11,000 feet up in the Hindu Kush mountains. The Soviet-built tunnel was heralded as a marvel of engineering when completed in 1964.

But years of war, neglect and geology have turned it into a dangerous bottleneck.

Driving through the Salang Tunnel is a pretty harrowing experience. Water pours in through holes in the wall. Whatever pavement might once have existed has long since deteriorated into an extremely rough, bumpy, dirt, and in some places, mud road.

The tunnel is barely wide enough for two lanes of traffic, and the uneven road surface means trucks often tilt over at precarious angles.

Even though the tunnel is only 1.6 miles long, a recent drive through it took more than 20 minutes because it's jammed with massive trucks inching along the cratered road.

The diesel fumes were dizzying. At one point, the dust was so thick you could barely see five feet in front of you. It's no wonder the tunnel has become known as a choke point.

"It takes us 10 to 12 days to get from the [Afghan] border through the Salang Tunnel," says Najibullah — Afghans typically go by a single name — a truck driver sitting on the southbound side of the road. The distance covered in this journey? About 200 miles. 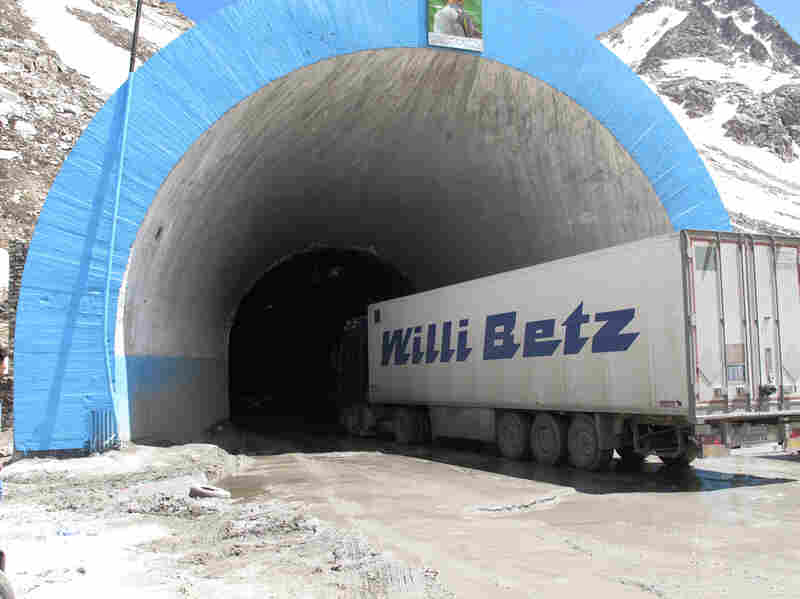 A truck carrying food for NATO troops drives into the northern entrance of the Salang Tunnel. This truck waited several days to be able to enter the tunnel. Sean Carberry/NPR hide caption 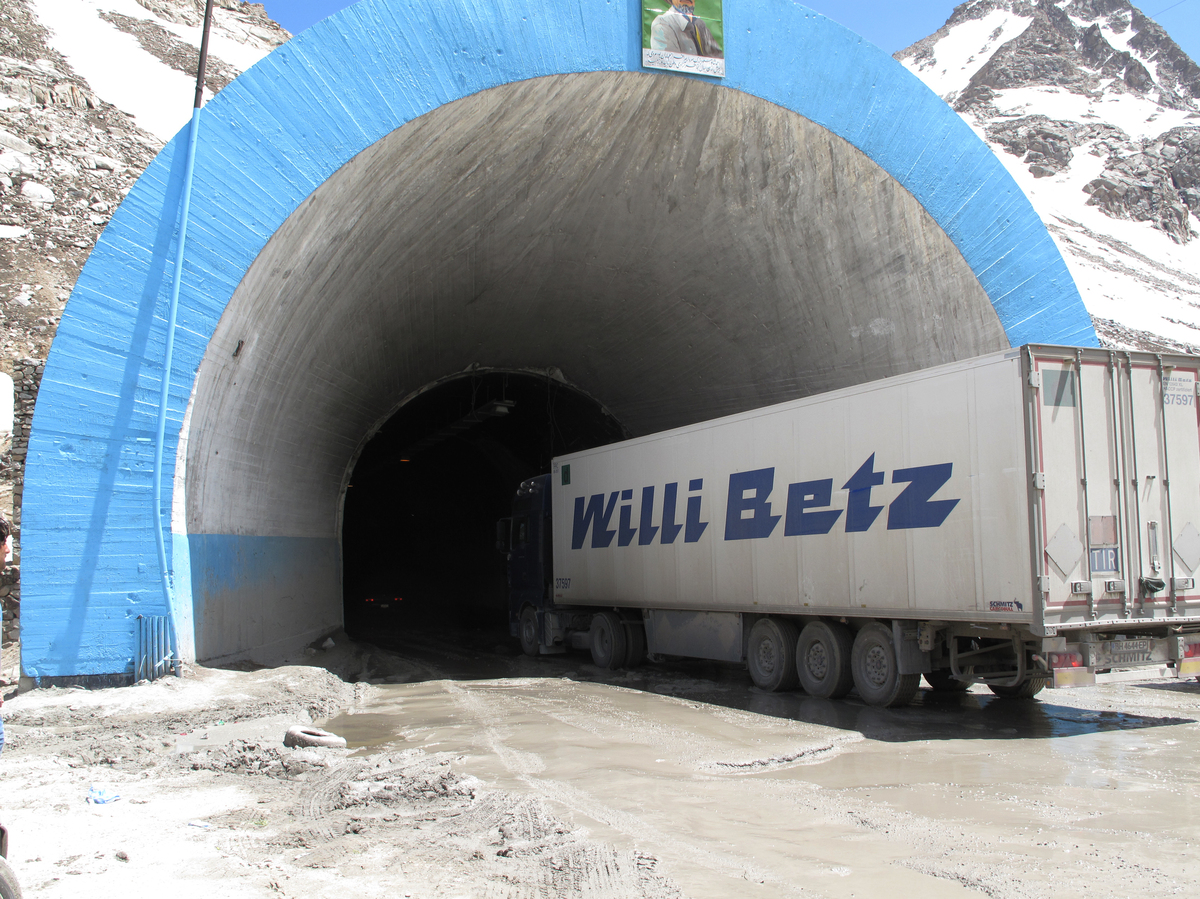 A truck carrying food for NATO troops drives into the northern entrance of the Salang Tunnel. This truck waited several days to be able to enter the tunnel.

Lines of trucks waiting to pass through the tunnel often stretch up to 10 miles on either side. That's because truck traffic is restricted to one direction at a time. Every 12 hours, the traffic alternates directions.

Najibullah is hauling food for NATO troops that he picked up at Afghanistan's border crossing with Uzbekistan.

"A year ago, it used to take us one to two nights" to make the approximately 265-mile journey from Uzbekistan to Kabul, he says.

A year ago, 1,000 to 2,000 vehicles passed through the tunnel each day. But since the Pakistanis stopped allowing NATO to use their roads last November, traffic through the Salang has soared. An estimated 10,000 to 20,000 vehicles are now passing through daily, and it's getting more complicated with the drawdown of U.S. forces.

Stephen Biddle, an Afghanistan expert at the Council on Foreign Relations, sums it up this way: "The issue is the mathematics of the stuff you need to move, the size of the pipe through which you're moving it, and how much time you're willing to take."

He says that the troops will fly out on schedule, but their equipment might take a bit longer. And, hauling armored trucks and generators out via Salang could cost five times more than going through Pakistan. It's putting even more strain on a situation that's already dangerous. 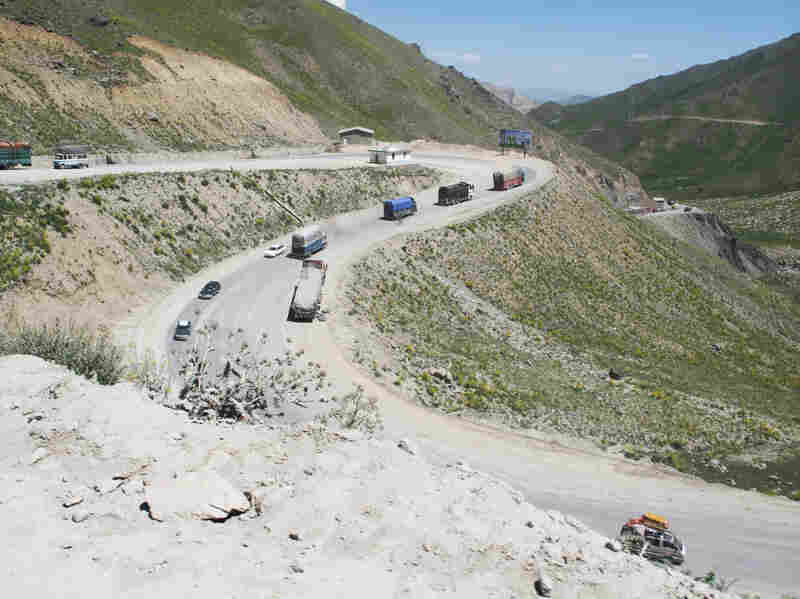 Vehicles drive one of the many switchbacks as the Salang Highway climbs from just over 5,000 feet at the valley floor to the Salang Tunnel, 11,000 feet up in the Hindu Kush range. Sean Carberry/NPR hide caption 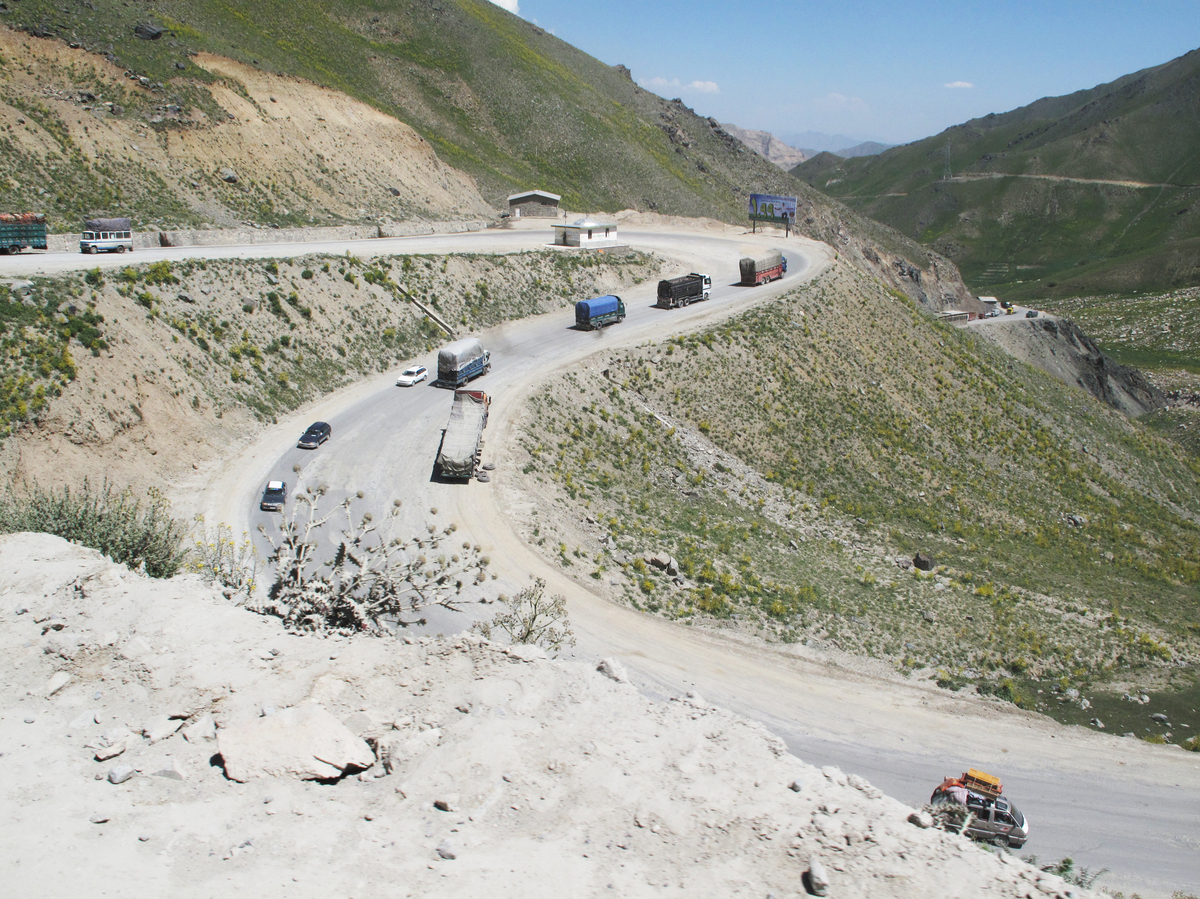 Vehicles drive one of the many switchbacks as the Salang Highway climbs from just over 5,000 feet at the valley floor to the Salang Tunnel, 11,000 feet up in the Hindu Kush range.

Setting aside questions of avalanches, washed-out roads and asphalt collapsing under the weight of heavy trucks, Biddle says, "simply getting through the Salang Tunnel itself is a dangerous undertaking that could very easily yield a catastrophe with a significant loss of life."

Mahmoud is another trucker waiting to pass through the tunnel. He's been driving this route for 30 years, and he says the problems are growing day by day.

"They are not giving us extra money. Because of the bumpy roads, we are getting flat tires. When we spend 10 to 15 days here, we are spending our own money to refuel the truck and also to refuel the freezer," he says.

Biddle says the U.S. would rather take its chances with the Salang Tunnel.

"It increases our cost," he says, "but we're already spending an enormous amount of money."

On a recent day, a convoy of SUVs pulls up at the Salang Tunnel's northern entrance, and Afghan Gen. Mohammed Rajab stepped out. He's been the chief of maintenance for the Salang highway for 10 years. He looked at the crumbling concrete on the opening jutting out from a snowcapped mountain peak. He's worried about a disaster — like the 1982 fuel truck fire that killed hundreds of Soviet troops and Afghans.

"Our big concern is from the ventilation," he says. "When there is an accident inside the tunnel, possibly the pollution will kill all the people who are stuck inside."

Rajab has been pushing for NATO to fund renovations. He says it would take at least four months with the tunnel completely closed to make needed repairs. That's not an option given NATO's demand for supplies.

Last summer, USAID spent $5 million repaving the tunnel, sealing leaks and repairing the lights. But that pavement is already gone, water is pouring in, and the lights barely illuminate part of the tunnel.

A trip back through the tunnel, on the return to Kabul, is another anxiety-inducing experience. To top it off, traffic coming the other direction is blocked because a truck has wedged itself against the inside wall.