Accessibility links
Planes, Patience And Slightly Kid-Friendlier Security School's out and that means families with young children are packing their bags and boarding flights. This summer, though, kids going through airport security are being treated just a little bit more like kids. The Transportation Security Administration has announced some new policies. 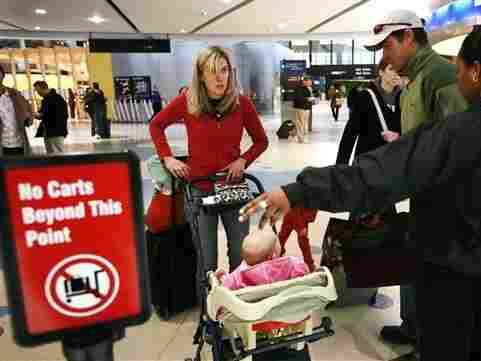 Children going through airport security are being treated just a bit more like children thanks to new TSA rules. Steven Senne/AP hide caption

It's 7 a.m. at the Kimball's Washington, D.C., home. Peter and Leslie Kimball are running up and down the stairs, changing diapers and trying to feed their kids breakfast.

They're packing for a work conference in Orlando, Fla., but they've also planned a surprise for their daughter Lane's birthday: a visit to Disney World.

This summer, more than 200 million people are expected to fly out of U.S. airports. The Kimballs are one of many families flying with their kids.

They made their flight with time to spare and Leslie says they enjoyed the flight. But for many families, flying is anything but fun.

"It is stressful when you have three kids, you've got carry-ons, you're trying to comply with all the rules, you're being yelled at by a TSA agent, that all raises your blood pressure," says Christopher Elliott, a father of three young children and a consumer advocate based in Orlando. He writes about the TSA for publications like National Geographic Traveler and The Washington Post.

Elliott says he understands why kids have to go through security checkpoints — but still.

How To Get Through Security With Kids

"When I see my daughter go through the checkpoint, I'm always thinking, 'What if she's singled out for a more thorough check, and how am I going to react?' " he says. "As a parent, that kind of freaks me out. I would not want anyone touching my kids like that."

TSA spokeswoman Lisa Farbstein says last fall, the agency began to reduce — though not eliminate — the number of pat-downs for kids.

If they set off an alarm, kids can now go through the metal detectors more than once. If they continue to set off alarms, instead of getting a pat-down, they'll be swabbed — usually on their hands. The swab then goes into a machine to check for explosive residue.

Pat-downs are among the top five complaints the TSA received last year.

"One of the things that is going to be met with much happiness, from the parents anyway, is that passengers who are 12 and under no longer need to take off their shoes," Farbstein says.

She says there's a reason agents screen kids and their belongings. Last month, in Providence, R.I., a parent had sown gun parts into a child's stuffed animal. Once on the plane, the parent could have reassembled the handgun if TSA officers did not screen the child's toy.

Keep The Shoes On, And Have Some Patience

Amy Selco is a mother of two boys in Silver Spring, Md. She says the new rule allowing her sons to keep their shoes on has been very popular with her family.

"The first time my son had to take off his shoes, he flipped out," Selco says. "I mean, that's kind of a violation. He was in this new environment anyway. And he screamed and he cried."

Monika Sakala, a mother of two young girls, writes about her experiences for her blog, Wired Momma. She says for her, the most difficult part of traveling with kids is often dealing with the adult passengers.

"People see little kids coming on an airplane and they immediately recoil," Sakala says. "Parents do not want their kid crying or acting out at all. It's their nightmare."

She says she's surprised when people don't offer to help a parent traveling alone with their kids. Families have to think about a lot of things other passengers don't: packing strollers, car seats, baby formula, diapers, snacks and entertainment for their unpredictable kids.

"I'm always just worried about other passengers. Sometimes they're in a bad mood," Clark says. "I remember when I didn't have kids, being disturbed by a kid kicking the back of my seat. Now I'm much more understanding."

As for other parents flying with their kids this summer, Selco has a word of advice: patience. Lots of it.