Accessibility links
The Fight For The Right To Hear, 'Yes, Chef' Celebrity chef Marcus Samuelsson was born in rural Ethiopia, adopted and then raised in Sweden. As a black chef, he was conscious of breaking through the racial barrier. The heat in the kitchen never let up. "Through that process of being yelled at in German, French and English and Swedish, I learned a lot," he says. 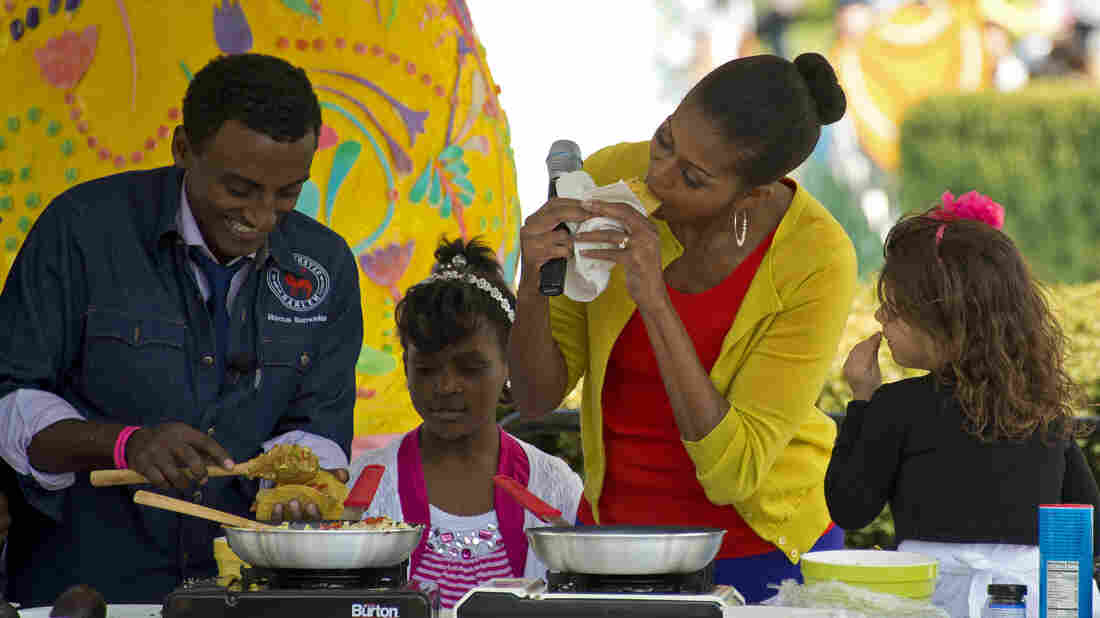 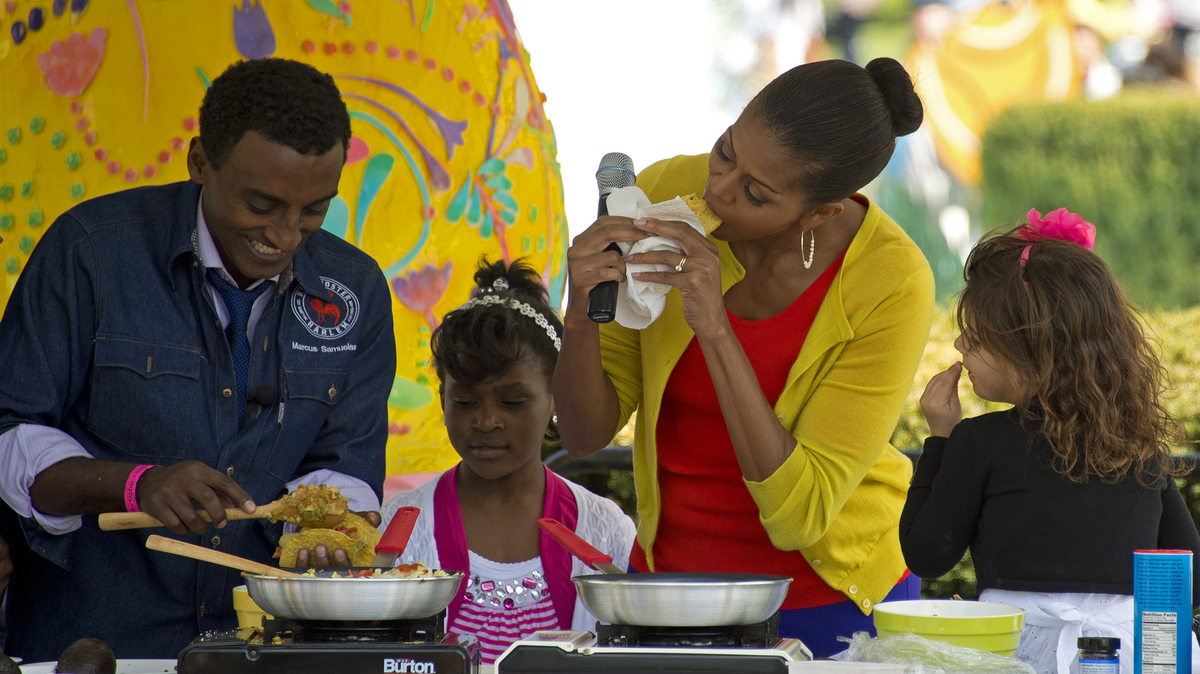 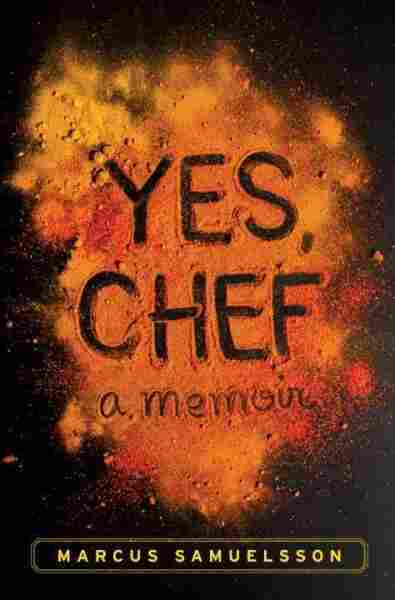 As you walk in the doors of Red Rooster, you immediately see a key piece of design: a bar dominates the front room, nearly touching the street, as if to say to the people of Harlem, N.Y., "Come on in."

The story behind the restaurant's owner, celebrity chef Marcus Samuelsson, is more about life than food.

Samuelsson was born in rural Ethiopia. He and his sister were adopted and raised in Sweden. Eventually, Samuelsson became world-famous. But he's never forgotten where his journey began. His new memoir, which shares these challenges and triumphs, is called, Yes, Chef.

Inside his kitchen at the Red Rooster, cooks are too busy to smile, and the yard bird is a signature dish. Samuelsson says it was very important to get it right.

"Coming to Harlem, I knew my fried chicken had to be better than yours," he says. "And you had to find authorship in the food."

With his employees, Samuelsson speaks firmly. He is quick to say he's not asking anyone anything.

"In a kitchen ... you have to be very direct. Very direct. There needs to be one leader, and there needs to be a couple of sous chefs, and the cooks need to say, 'Yes, Chef,' " he says. "Why is being humble something wrong in our society? I was humble many times for a long, long time. And through that process of being yelled at in German, French and English and Swedish, I learned a lot."

Once, while building his career, he was told to cook for the owner's dog.

"Cooking for a dog could be demeaning, but it could also be the greatest gift if you know where you're going," he says. Samuelsson knew it was a test. "Is he gonna break? And how do I react? That's what they wanted to see. And also know, as a black chef, I have a very small window for errors."

Long before that process began, Samuelsson was a sick child in an Ethiopian village. 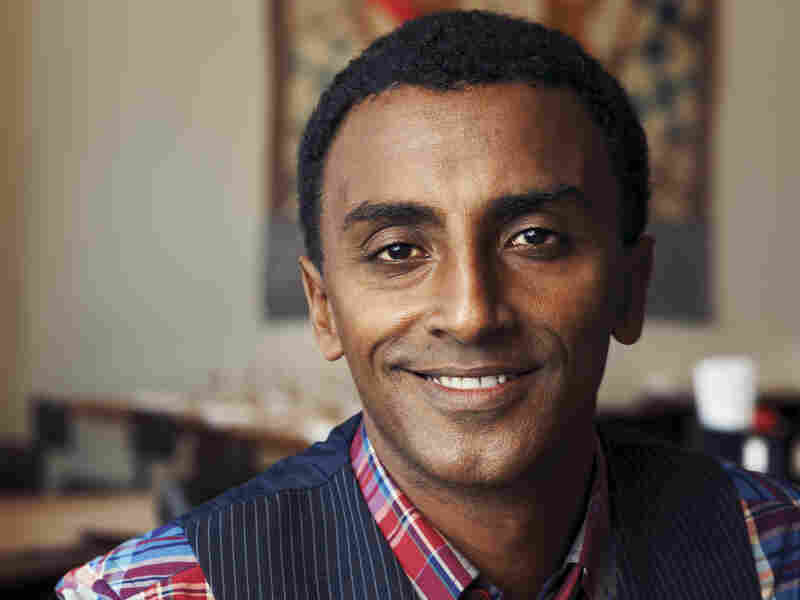 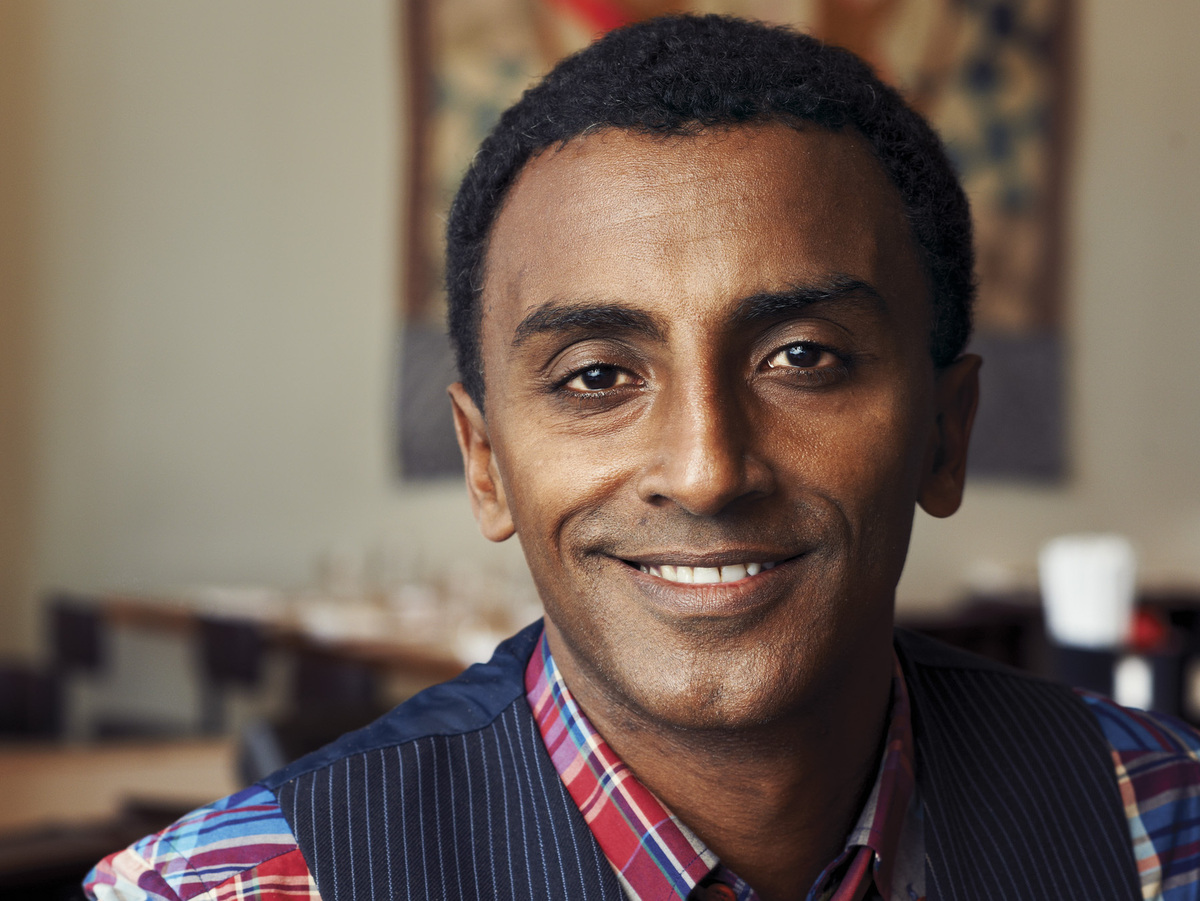 Marcus Samuelsson is the proprietor of Harlem's Red Rooster restaurant.

"I've never seen a picture of my mother, but I knew a couple of things. I knew my sister and I and my mom were sent out on a journey," he says.

They walked from their village, about a two-hour drive from the capital of Addis Ababa, to get to the city. He says they walked mostly at night to stay out of the sun. All three had tuberculosis.

"And [my mother] knew if she could just get us to the city, she could also then have somebody that could take us to a hospital," he says. "And we got to the Black Lion Hospital, but she sadly passed away, and me and my sister, Linda, survived."

He says he looks for a photo of his mother every trip to Ethiopia.

"When I get that picture, I want to put her [in] a nice place here in the restaurant. It shows dignity," he says. "It's thanks to her that I'm here. Thanks to her, my sister's here. She really offered her life in order for us to survive. So I owe her that."

On breaking a racial barrier in the kitchen

"It didn't exist, the concept of a black chef. There were black dishwashers, but there was not — ever, ever, ever — a black chef. So I had to not only open the door, but with the concept that it would be even possible. But it also made me stronger. I always feel, get me in a room, give me my pots and pans, give me the ingredients, and I'll be fine.

On hiding an unplanned daughter from co-workers to avoid stereotyping

"I think I was always aware that my resume did not just have to be great, it had to be fantastic, with zero way of my employer to say, 'Well, we're not going to hire him. There might be something.' And I was very young and just didn't know how to deal with the whole situation properly. And I always lived in this fear that maybe they're not going to hire me ... I felt like if I go out of the world and work, and go as far as I possibly can, then that's my way of taking care of her. I could deal with that at 20 years old. ...

"I didn't want to be another black man that was not responsible. In many ways, maybe I wasn't responsible, but I was lucky enough to have a structure with my Swedish mother to help me out."

On meeting his father in Ethiopia

"In the beginning, obviously I had all of those questions [about why he let us go]. ... But once you start to see, in his mind, we were saved because we were in Europe. And in his mind, that was good. Good enough. These kids were OK. And that's an approach that's very hard maybe in the West to understand, but that's an approach that a lot of people from Africa would agree with. You know, 'They're educated in Sweden, what's their complaint?' "

Read an excerpt of Yes, Chef