Accessibility links
A Year Without Mexican-American Studies In Tucson An Arizona law that went into effect last year essentially ruled that the program offered in the city's public school system was divisive and should be scrapped. At the end of the first semester without the classes, hard feelings still linger. 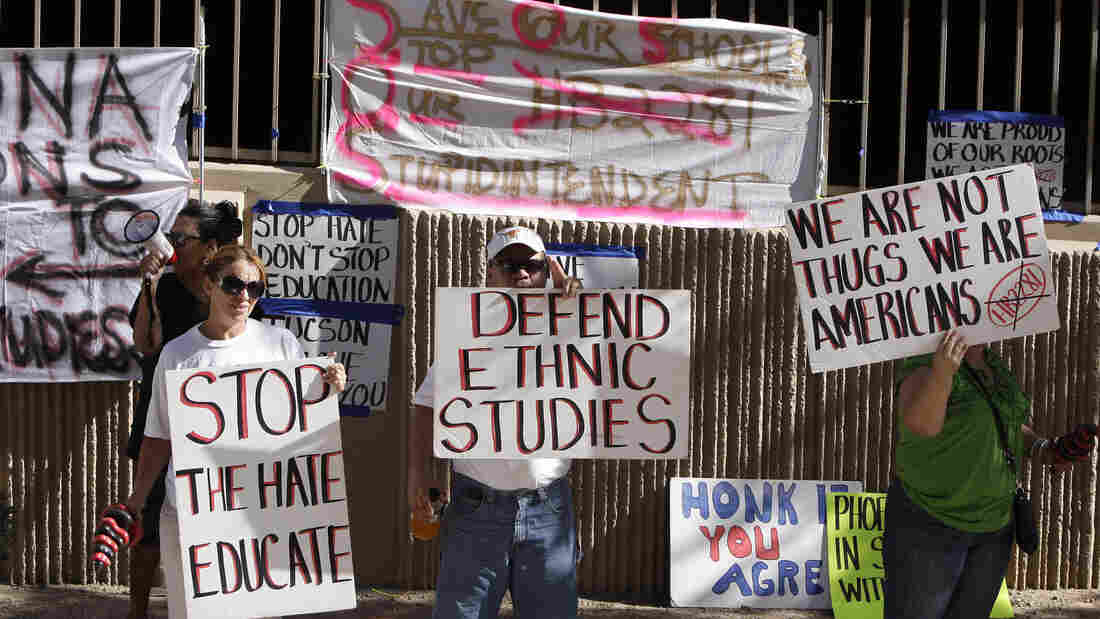 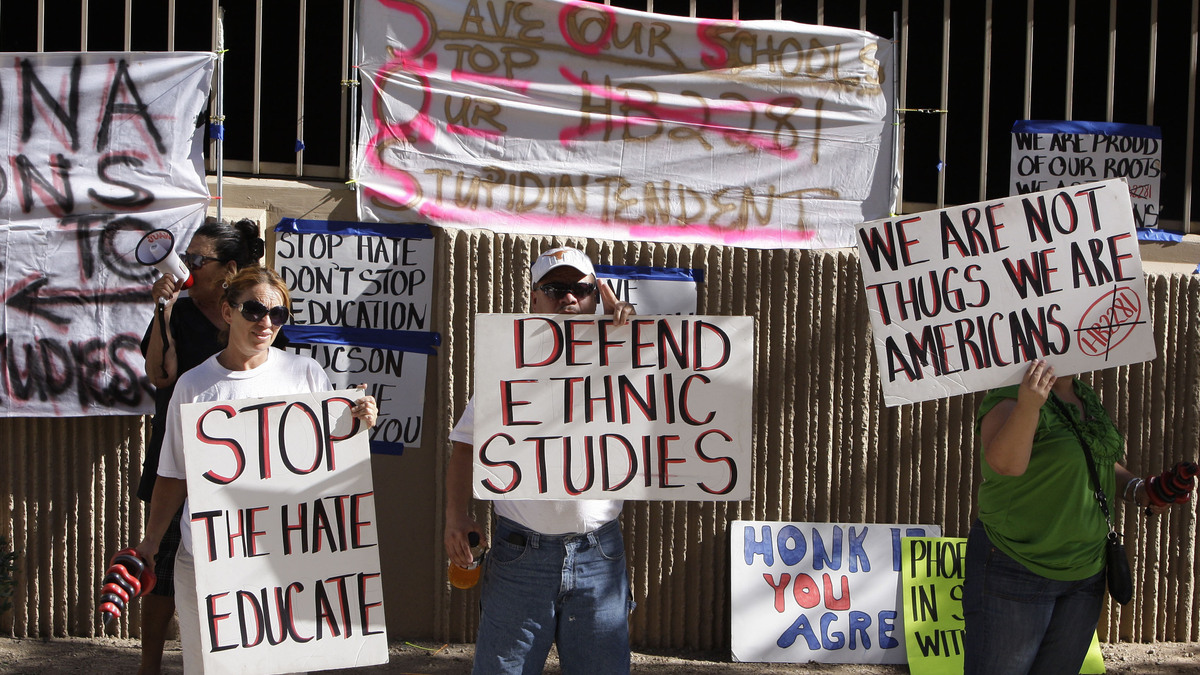 Protesters are seen in June 2011 in support of the Tucson Unified School District's Mexican-American studies program. A new state law effectively ended the program saying it was divisive.

An Arizona law that went into effect last year essentially ruled that the Mexican-American studies program offered in the Tucson public school system was divisive and should be scrapped. At the end of the first semester without the classes, hard feelings still linger.

For eight years, until this past January, Lorenzo Lopez taught Mexican-American studies at Cholla High in Tucson, Ariz., the very school from which he graduated in 1992.

After high school, Lopez spent a couple years working odd jobs as a miner and a factory worker; anything to pay the bills. But when he enrolled in college to get ahead, it was one class — a course in Chicano literature — that changed everything.

"It validated the struggle of folks who were just like me, the immigrant story," Lopez says, "the story of not quite fitting in to this American fabric."

Before this class, Lopez says he felt alienated by what he was being taught because he couldn't see his own reflection in the classes. The Chicano literature brought it all in focus and made him feel like he had a part in the story that is America.

After graduating college, Lopez jumped at the chance to pass that sense of empowerment on to a younger generation of Latino students.

"It's a process of consciousness-building, and that process begins with themselves as individuals," he says.

Lopez says he tried to instill in his students a sense of pride in their Latino heritage, in the hopes that it would empower them. He used music, literature and current events to awaken the kids to politics and civil rights. He says his students loved the class.

But in January, after a contentious community debate, the school board handed down an edict: Its members told Lopez and the rest of the Mexican-American studies instructors in the county to stop teaching the class and switch to a more standard curriculum.

"It was horrible," Lopwez says. "It was heartbreaking to have students who've experienced this class in the first semester, and know the potential and know what they should be getting ... and just have to stop."

Lopez says students were pleading for him to teach the class anyway, but he couldn't. Now, Lopez teaches traditional social studies, history and government.

Classmates Camile Chantharath and Adilene Viramontes were students in Lopez's Mexican-American studies class. They say going to Lopez's class was like flipping on a light switch, learning about their ancestors and what their families went through.

That work turned into political action when the cancellation was announced. Camille and Adeline helped organize a student walkout from their school. But it was this very activism that fueled the anti-Mexican-American studies argument, especially following a raucous event last year.

Protesters, mostly students, mobbed a school board meeting to try and save their courses. Though the classes were voluntary and open to all, not everyone was sorry to see the classes discontinued.

"She came home and started telling me that the teacher [was focused] on Republicans, his hate for Republicans [and] saying that all Republicans are white and that they hate Mexicans," says Irene Corella, the mother of Mariella, a senior at Tucson High School.

Irene Corella says she is a conservative Republican, and her daughter had hoped to enroll in a regular English class at Tucson High. The course was full, however, so they put her into Mexican-American Studies. Mariella says she thought it she'd be learning about her Hispanic heritage.

"Immediately when I got into the class, they weren't really on that topic," Mariella says. "They'd just talk about [how] immigration."

This sounds different from what was happening in Lopez's classes at nearby Cholla high school, and that's the problem. Like in any school district, there were good teachers and others that were not so good.

It was the strident nature of some of those classes that led then-state school Superintendent Tom Horne and his successor, John Huppenthal, to push for the law that eventually killed Mexican-American studies.

They found an unexpected ally in Loretta Hunnicutt, a self-described liberal Democrat from Tucson who's been involved in school reform for 30 years. The classes sound like something she would normally support.

"It would be everything I would defend normally, and I came out in defense of the classes," Hunnicutt says. "That's how I got pulled into this whole situation."

Two years ago, Hunnicutt began talking with other teachers and parents, and she started rethinking her opinion of the program. She says the class had morphed into a very political class that had virtually no emphasis on culture or history.

"It seeped into every single one of the class offerings, unfortunately," she says. "So even when you had really conscientious teachers, it couldn't help but become political in nature."

This was all going on right around the time when the Arizona legislature introduced Senate Bill 1070, the law aimed at stopping illegal immigration. Many in the Latino community felt like they were under siege.

For their part, Cholla High seniors Viramontes and Chantharath are proud of the history and activism they absorbed in Lopez's Mexican-American studies class. They says they think that even 20 years from now, it will still be a part of who they are.

"[It's] like a good memory that motivated me to fight for what I thought, and like a class that I was actually learning what I wanted to learn because I picked it because I wanted it," Viramontes says.

Chantharath says she'll look back on it as the best year of her life because she learned about so many things from Mexico and her culture. Her wish is that her kids will have the opportunity to learn about their culture as well.

Perhaps they will. There is a chance that down the road a less political version of Tucson's Mexican-American studies program will be reintroduced. Before that can happen, however, this community will need to mend.

Tucson's struggle over the classes was a fight that quickly turned nasty and personal. Latino school board members who voted to terminate the courses were called sellouts by their neighbors. Good teachers found themselves facing disheartened students and many — on both sides — felt like an opportunity had been wasted.

Al Letson is the host of NPR's State of the Re:Union.