Accessibility links
What's A Taxi Ride Worth? You Set The Price Eric Hagen has gone from Wall Street to the streets of Burlington, Vt., and his one-man taxi service is accruing a flock of faithful customers. His Recession Ride Taxi puts riders in charge of deciding a fair fare. 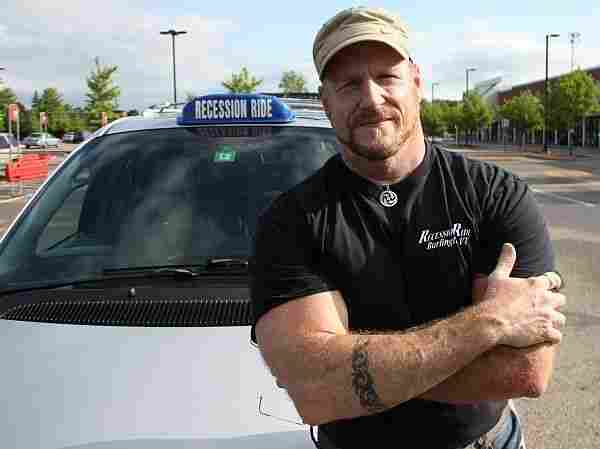 Eric Hagen charges people only what they can afford in his Recession Ride Taxi in Burlington, Vt. Kirk Carapezza for NPR hide caption 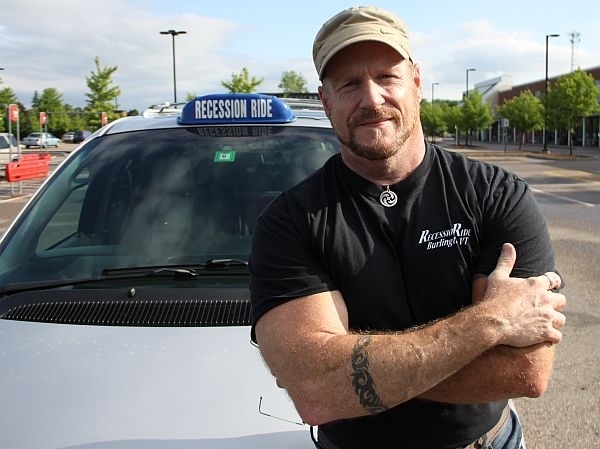 Eric Hagen charges people only what they can afford in his Recession Ride Taxi in Burlington, Vt.

In a recession, watching the meter on a taxi tick higher and higher can be distressing. But in Burlington, Vt., the Recession Ride Taxi lets customers set their own price.

It's too early on a weekday morning, and Hagen is picking up Alan Flanders outside his apartment in Burlington's Old North End. Flanders is tired. He's heading south across town, about four miles to the country club where he works as a sous chef. Until three months ago, Flanders was unemployed, so he appreciates Hagen's taxi service.

"I'd be walking to work this morning if it wasn't for Eric," Flanders says.

In most cabs, this ride would cost more than $20. But Hagen takes whatever amount Flanders can afford. Today, it's $12.

"Because I don't have a meter, it is 'pay what you want.' If I had a meter, it would still be operated the same way," Hagen says.

In the three years he's been running this business, Hagen says, he has never been stiffed. He averages about 100 rides each week, with an average fare of $10 to $15. At a time when his former colleagues on Wall Street continue to feel public scorn, Hagen says Recession Ride Taxi is running on trust.

"People know that there's value in a service. And they're generally not going to try to get over on you," he says. "People can decide for themselves."

After dropping Flanders off at the country club, Hagen weaves his silver Dodge Caravan back downtown.

The Experiment: In Good Times And Bad

After a series of layoffs on Wall Street, Hagen got a job with the American Red Cross in Vermont. But he says his new paycheck wasn't going far enough.

By 2009, his mortgage was underwater. Hagen says that's when he got the idea for a "pay-what-you-want" taxi service.

"I was in trouble. I was like, 'Look at my mortgage. Look how high this is. Why is everything so expensive? Why not try something that gets away from price and see what people do, how they react?' " he says.

Deb Clark says she could definitely use more services like Hagen's. On a recent afternoon, she sits in the front seat, like a friend, as Hagen transports her between her two jobs. Clark says she depends on Recession Ride each week.

"I recently had to take a local cab company, and I called them ahead of time and asked for the price on the phone," she says. "They gave me a certain price. I got in the cab, and they changed the price. I find that very common with cabs. And Eric is always straightforward."

Hagen has left his job at the Red Cross to operate his taxi full-time. Now, he hopes to expand by adding another car or two.

Considering the economy, he thinks there will be plenty of riders.

"I don't see those explosive economic days that we previously had. It's changed," Hagen says.

Even if better days do return, Hagen says — in good times or bad — his "pay-what-you want" business model will remain the same.