Accessibility links
As NATO Draws Down, Afghans Fear A Brain Drain Afghanistan's anemic economy has been propped up for the past decade by international aid. But as NATO troops draw down, international assistance is also shrinking, which could put many jobs at risk and lead skilled Afghans to look elsewhere for work. 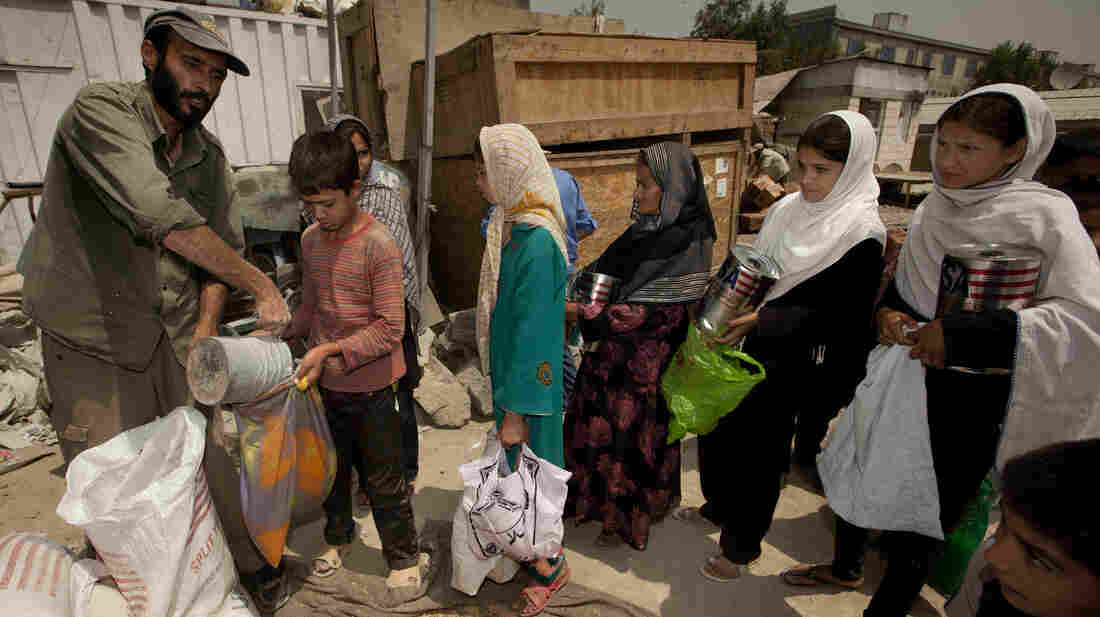 International aid has poured into Afghanistan in recent years, but it is expected to fall sharply as NATO forces pull out. That will place great strains on the economy, and may lead skilled Afghans to leave if they can't find work. Here, street children in Kabul collect food from an aid group. Dar Yasin/AP hide caption

As NATO troops leave Afghanistan, there will also be a decline in aid money that has flooded the country over the past decade and created hundreds of thousands of jobs funded by donor money.

That means fewer jobs for Afghans, and skilled Afghans may be tempted to leave the country as part of a brain drain that could further weaken a fragile state.

Many Afghans, particularly those with an education and means, fled the country during wars dating back more than three decades. Some have come back in recent years. But another mass exodus would deprive Afghanistan of a critical building block.

Sitting in the basement of a large house-turned-office isn't where Rohullah Zarif wants to be. He spent 15 years with the development organization CARE Afghanistan. Now, he's a technical adviser for an international construction and support services firm.

"Here, I am working for one person. He's the owner of the company," Zarif says. "When I worked for CARE, it means my [efforts] reached to the poor communities that are in need."

CARE is just one of hundreds of private groups working in Afghanistan. It used to receive 80 percent of its funding from the U.S. Agency for International Development, or USAID. Last fall, that well ran dry: Zarif and 460 others lost their jobs and had to look elsewhere. 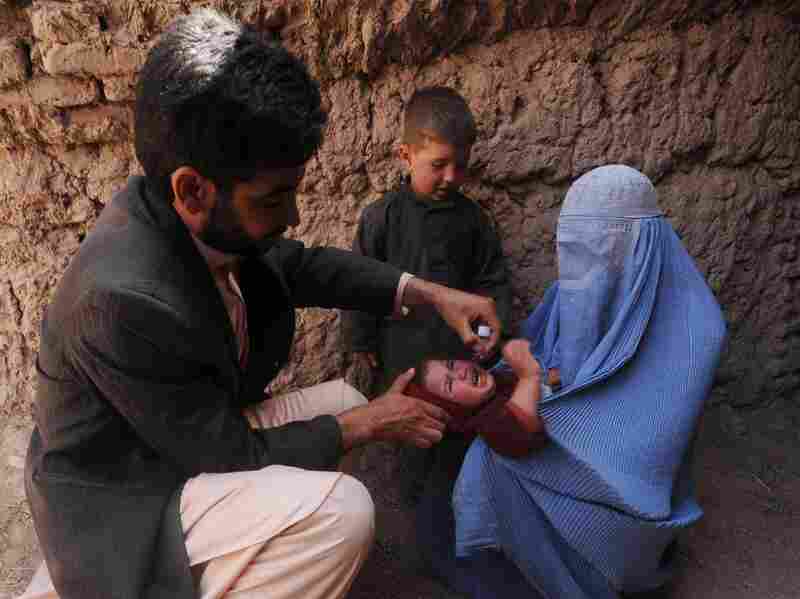 Many Afghan government programs depend on foreign aid. Here, an Afghan health worker administers a polio vaccine to a child in the western province of Herat on March 27. Xinhua /Landov hide caption 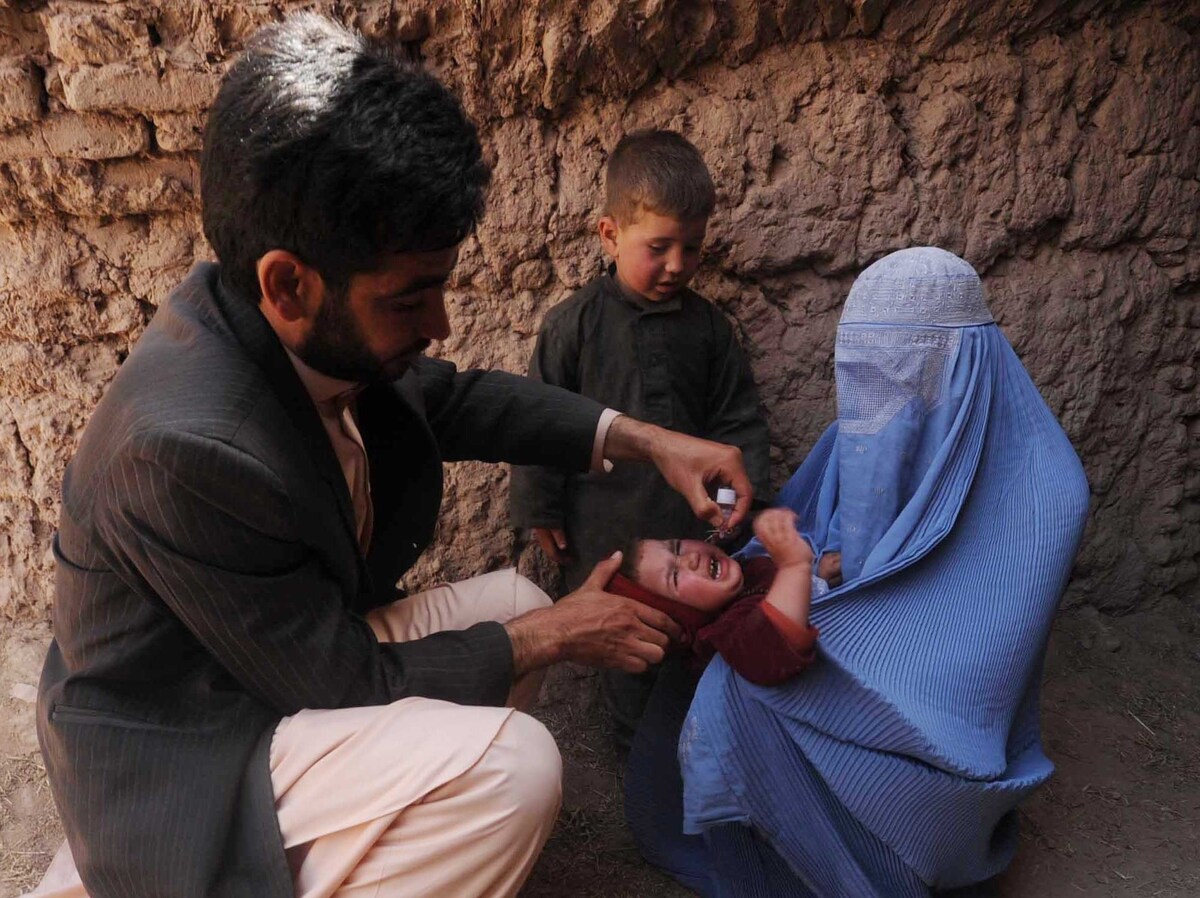 Many Afghan government programs depend on foreign aid. Here, an Afghan health worker administers a polio vaccine to a child in the western province of Herat on March 27.

While he has a job, it's not the one he wants, and he doesn't know how long it will last. Still, he has fared better than many former colleagues at CARE. He says one has a doctorate and has been jobless for seven months. Another is a civil engineer who got tired of looking for work at his skill level.

"Now he's a shopkeeper, not an engineer," Zarif says.

Jennifer Rowell, director of advocacy for CARE Afghanistan, says a few years ago there was a massive surge in international funding for development work in the country. She describes it as an aid bubble that was going to have to burst.

"A lot of people who have left some pretty nice jobs in some great NGOs where they were able to build their skills and really contribute, they're struggling, they can't find anything," says Rowell. "Bottom line, there will be a hit, and that hit has begun."

UNAMA, the U.N. Mission in Afghanistan, itself is facing a $30 million funding cut this year. The mission will have to close offices and lay off skilled Afghans. Afghanistan's anemic private sector is nowhere near able to absorb these people, especially at the salaries they were making with NGOs. The country already suffers from very high underemployment.

"The few skilled positions we're recruiting for," says Rowell, "we have about five times the number applicants applying for the job this year than we did last year."

According to Afghanistan's Ministry of Economy, there are roughly 50,000 skilled Afghans working for NGOs.

A Government Dependent On Aid

And it's not just those positions that are at risk. According to World Bank statistics, 106,000 Afghans working in key ministries are paid through donor funds and paid quite well. Donors also provide salary supplements to thousands of other government workers to attract and retain skilled individuals.

"You know that Afghan government does not have that much power or money to fund projects like I'm working on," says Ghullum Rasul Nawabi, team leader of the Kabul Urban Reconstruction Project.

Nawabi's office is in the Ministry of Urban Development, but the World Bank pays his salary.

"And the World Bank, they want to give some funds for the continuation of this project, but it's not clear yet," he says.

Nawabi says if his job is cut, he might have to move to Pakistan or Iran.

CARE's Rowell says many of the people in these sponsored government positions are dual nationals who returned to Afghanistan when the Taliban fell. They have other places they can take their skills to if funding dries up for their positions here, or if they are unsure about security.

"And I expect that the brain drain is going to be at that level, the senior civil service level," she says. "We might lose them depending on how those programs continue or are ended or shift, or are funded differently. This will be the group to watch."