Accessibility links
As 'Hungry Season' Nears, Yemenis Struggle For Food For years, Yemen has been a crisis of one sort or another. But now, after a year of protest and unrest, the situation for millions of Yemenis is dire. About 10 million people are without enough food to eat, and more than half of Yemeni children are malnourished, aid groups say. 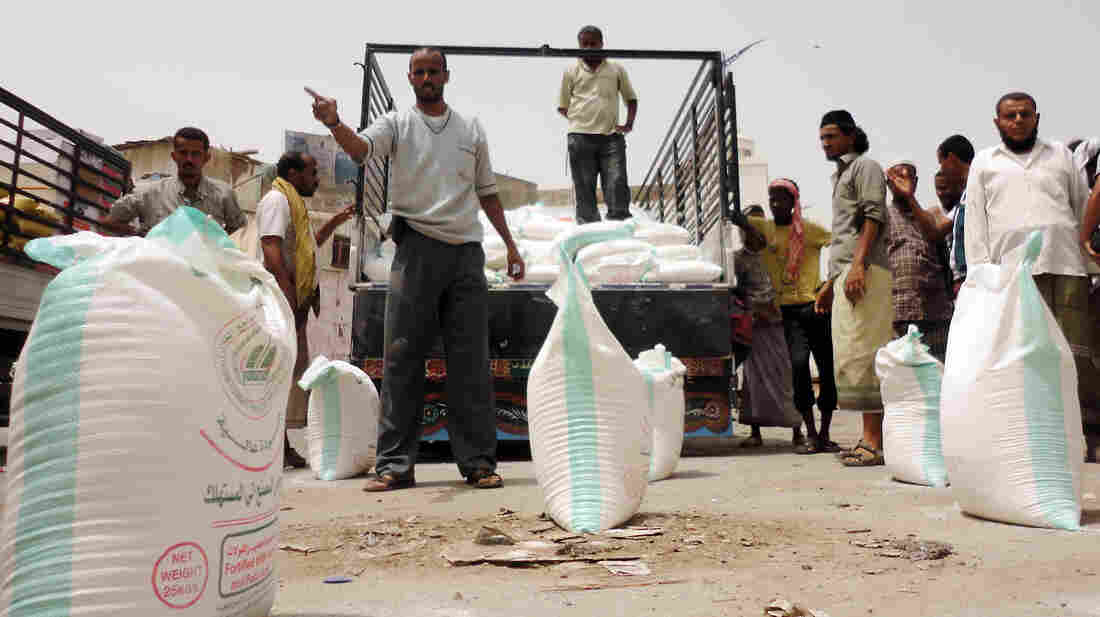 Displaced Yemenis receive food aid from the U.N. High Commissioner for Human Rights in the southern province of Abyan. While food is available in the country, many Yemenis cannot afford to buy it. About 10 million people are going hungry, aid groups say. AFP/Getty Images hide caption

Yemen has long struggled as one of the least developed countries in the world. But now, after a year of protest and unrest that saw the country's longtime dictator step down, the situation for millions of Yemenis is dire.

Aid groups say some 10 million people are now without enough food to eat, and more than 200,000 children face life-threatening levels of malnutrition.

If [the men in the village] find fish, they bring it. If they don't, we don't have food.

A woman in Dhami Robat, a fishing village along Yemen's western coast

Meat and vegetables are sold in Hays' main souk, a commerce center that serves a lot of the surrounding villages. But the people living at the margins simply do not have the money to buy food.

Just outside Hays and off the main road is the tiny fishing village of Bani Al-Robat, where women in brightly colored prints greet us with kisses. One pulls me toward a young mother, whose husband has drowned in the sea.

She is holding a very tiny baby, whose legs are about as big around as a carrot. This tiny person, the smallest baby I've ever seen, is 2 years old. The women say the child is very sick. It's likely the child has severe, acute malnutrition, which means he could die if not treated soon.

There are no men in the village because they're all at sea, fishing, the women say. "If they find fish, they bring it. If they don't, we don't have food," one woman explains.

The women say they sometimes go for weeks on just bread, tea and a watery salsa called sahouwak, made of tomatoes and spices. The result is not just the at-risk 2-year-old but dozens of too-thin, stunted children. In all, we counted more than 30 children who belong to just five households.

We can't wait. People at the moment are hungry.

Aid workers say Bani Al-Robat has always been poor but managed to survive. Now a perfect storm of factors has dragged the village into a crisis. First, the rain stopped coming a few years ago. Then, pirates started robbing the fishermen of their catch, and political unrest last year caused a massive fuel crisis.

That meant nearby farmers stopped farming, and the little work these women could get came to a halt. It also meant the cost of transportation to the nearby market was simply too high. Now the women and children have no idea where the next meal will come from.

Running Out Of Time

The British charity Oxfam is distributing cash to communities like Bani Al-Robat so they can go to the market and buy food. But this particular village was not registered on the government list that charity groups use, so these people have fallen through the cracks.

More On Yemen From NPR

Al-Qaida Takes To The Hills Of Yemen's Badlands

"But we can't wait," Fearon says. "People at the moment are hungry. And you can't wait until you've got perfect systems and perfect lists before you can actually address the needs that you can meet." Oxfam has set aside money for some people who didn't make the list, Fearon adds.

Aid groups acknowledge that cash payments are only a short-term solution for people who live near markets. Others, who have no money and no market, simply need food fast.

At a recent meeting of the so-called Friends of Yemen in nearby Saudi Arabia, $4 billion in aid was pledged. But a subsequent donor conference has been postponed.

Aid groups say they've received about half of the money they need to address the most dire cases. But with Yemen's so-called hungry season of hot, dry months approaching, Fearon says, people are simply running out of time.