Accessibility links
The Nation: Scalia's Broken Moral Compass As the Supreme Court's decision on the Affordable Care Act looms in the very near future, The Nation's Ilyse Hogue worries about the value system of one of the court's most outspoken members. 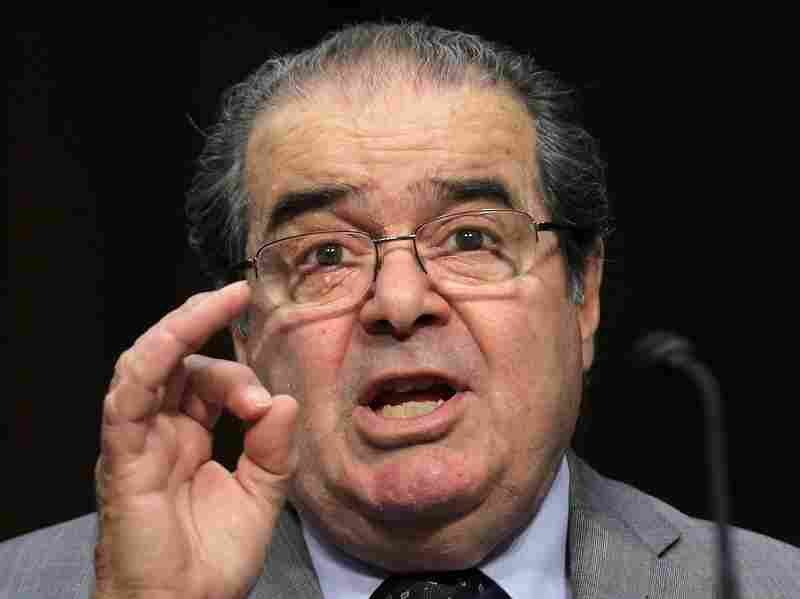 Supreme Court Justices Antonin Scalia testifies during a hearing before the Senate Judiciary Committee October 5, 2011 on Capitol Hill in Washington, D.C. No matter what decision the court makes, it is likely Scalia, known for his fiery opinions, will play a leading role. Alex Wong/Getty Images hide caption 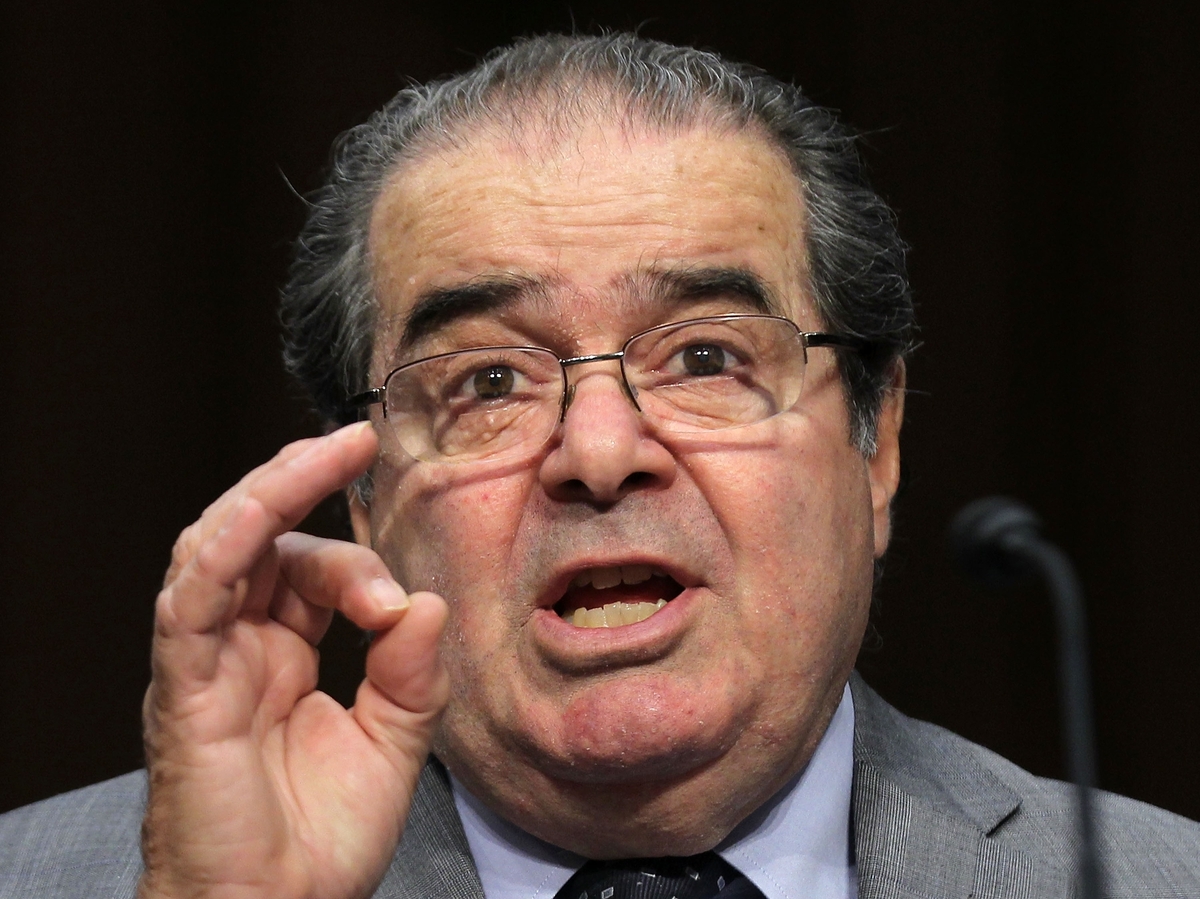 Supreme Court Justices Antonin Scalia testifies during a hearing before the Senate Judiciary Committee October 5, 2011 on Capitol Hill in Washington, D.C. No matter what decision the court makes, it is likely Scalia, known for his fiery opinions, will play a leading role.

Ilyse Hogue is a columnist for The Nation.

The Supreme Court's highly anticipated ruling on Obama's healthcare reforms could come any day now. Whatever the verdict, expect much ado about the hotly debated role of broccoli in healthcare and arcane explanations of the Commerce Clause that is at the center of the legal case against the individual mandate. But buried deep in hearings filled with legalese and judicial sparring was a short exchange that illuminates an American ideal that truly hangs in the balance with this decision — the idea that in a civilized society, we do not sit idly by and watch our neighbors die.

Read A Different Opinion On The Court

The specific back-and-forth in question occurred on the third day of the hearings between Justice Antonin Scalia and Solicitor General Donald Verilli, the administration official charged with defending the law in court. It went like this:

GENERAL VERRILLI: No. It's because you're going — in the health care market, you're going into the market without the ability to pay for what you get, getting the health care service anyway as a result of the social norms that allow — that — to which we've obligated ourselves so that people get health care.

JUSTICE SCALIA: Well, don't obligate yourself to that. Why — you know?

Read An Opinion On The Popularity Of Health Care Reform

GENERAL VERRILLI: Well, I can't imagine that that — that the Commerce Clause would — would forbid Congress from taking into account this deeply embedded social norm.

JUSTICE SCALIA: You — you could do it.

If you are not a frequent watcher of the Court and therefore not fluent in the cadences of judicial banter, this short, seemingly banal interchange in an exhaustive debate may not have even registered. The "deeply embedded social norm" that Verilli refers to — in fact seems confused that he has to explain to Justice Scalia — is the norm that dictates that people will step in to aid others who are ailing or in danger of death.

Scalia's statement that "you could do it [defy these norms]" eerily evoked the appalling moment at the September 2011 Republican presidential debate when the audience wildly applauded Wolf Blitzer's stunned probing of whether candidate Ron Paul would allow a 30-year-old uninsured man in a healthcare emergency to die. "Yes!" shouted unashamed audience members, turning a presidential debate into something reminiscent of the Roman Colosseum. When Justice Scalia argued against the social norms that Verilli was presuming sacrosanct, he was essentially saying, "Let him die!"

While we've grown to expect this kind of mob mentality from a radical right wing whipped up in a Tea Party frenzy, this bizarre display of indifference from a Supreme Court Justice breaks new ground in an evolving culture that seems to prize resistance to any and all government over the compassion that is the essence of civilized society. The right screams often and loudly that President Obama has declared war on the Judeo-Christian underpinnings they hold as American as apple pie. But in fact, it is Justice Scalia, from his exalted perch, who appears intent on vacating the Golden Rule and undermining the parable of the Good Samaritan, both core to Christian theology.

Dahlia Lithwick hit the proverbial nail on the head in her description of Justice Scalia when she wrote in Slate in 2003:

Scalia doesn't come into oral argument all secretive and sphinxlike, feigning indecision on the nuances of the case before him. He comes in like a medieval knight, girded for battle. He knows what the law is. He knows what the opinion should say. And he uses the hour allocated for argument to bludgeon his brethren into agreement.

Scalia, ever the showman, joked during the March hearings that having to read the entire healthcare law in order to rule on it would amount to cruel and unusual punishment, prohibited by the Constitution. At the same time, he displayed an egregious ignorance regarding which provisions in the bill actually passed. And on the final morning of arguments, Scalia laid his cards on the table when he argued that stripping out the individual mandate would cause the whole law to topple.

The mandate, more descriptively titled the "free-rider clause," fines uninsured individuals who expect taxpayer-supported emergency services to cover calamities that befall them. It is also the component of the reform that allows insurance companies to affordably cover those with pre-existing conditions. Cutting the mandate, Scalia mused, cuts the heart out of the entire reform and would almost certainly kick the whole matter back to a gridlocked Congress, while millions of lives hang in the balance.

A recent Pew poll shows that approximately 83 percent of Americans are affiliated with an organized faith, be it a form of Christianity, Judaism, Muslim, Hinduism or Buddhism. A whopping 78.4 percent of us fall somewhere in the Christian camp. Yet, it is core Christian values that are currently on trial at the Supreme Court.

Perhaps this emotional dissonance is what drives a new poll from the New York Times that shows that only 44 percent of Americans approve of the job the Supreme Court is doing. Once a venerated institution that seemed immune to the partisan squabbles of the other branches of government, the Court has consistently displayed its corporate and right-wing allegiances in decisions that span from 2000's Bush v Gore when it picked our president and irrevocably altered the course of history (Scalia later told Americans to "get over it!" when asked about the decision) to the 2009 Citizens United decision, the impact of which is being felt acutely this election season. Now, 75 percent of Americans say that the Justices' political preferences motivate their decision making on the bench.

When healthcare reform passed in 2010, the United States ranked dead last among similar countries in a study comparing cost and quality of healthcare. America consistently spends twice as much for lesser care than its industrialized allies. While the Affordable Care Act left some of the best solutions on the table, it offers real hope to the one in four American adults that go without healthcare each year due to job transitions or other circumstances. So many of our neighbors live in terror that a single unexpected calamity will drive their family into bankruptcy spurred by emergency medical bills. Now, when the verdict comes in, those fellow Americans can add a new fear to their list: that a Conservative Catholic Supreme Court Justice will lead the charge to let them die.