Accessibility links
Mexico's Election: A Fresh Face For An Old Party The favored candidate in Sunday's presidential election is from the PRI, which ruled Mexico for decades, until it was ousted from power in 2000. Enrique Pena Nieto promises a different approach to drug violence and says he can boost a struggling economy. 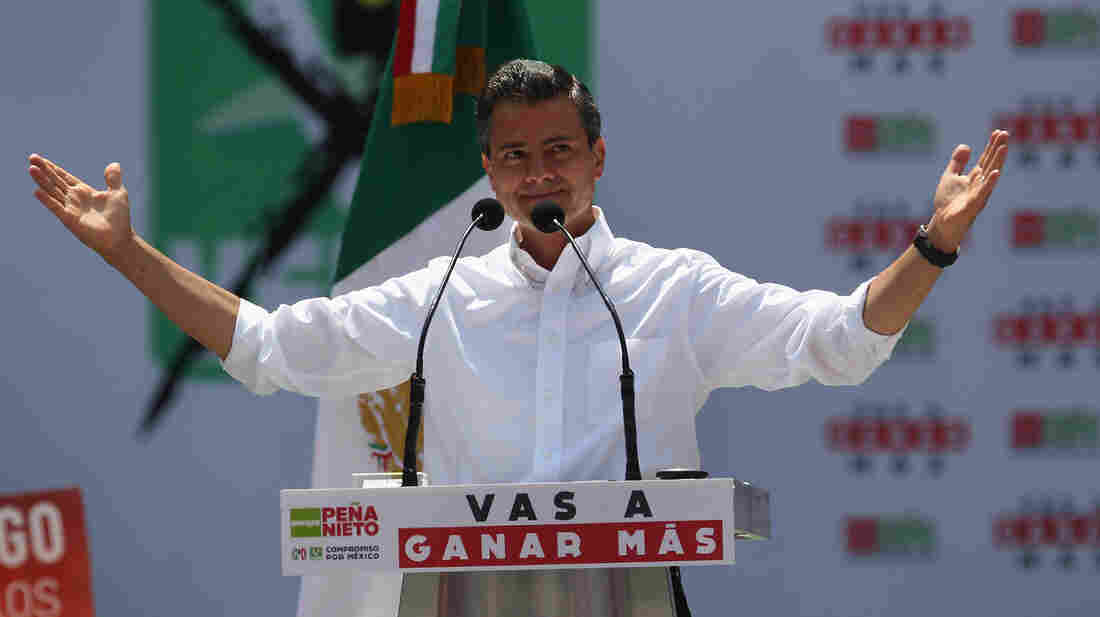 PRI candidate Enrique Pena Nieto campaigns in Mexico City. Pena Nieto is heavily favored in Mexico's presidential election on Sunday. He says his party, which has been out of power for 12 years after ruling for seven decades, has changed its ways. John Moore/Getty Images hide caption 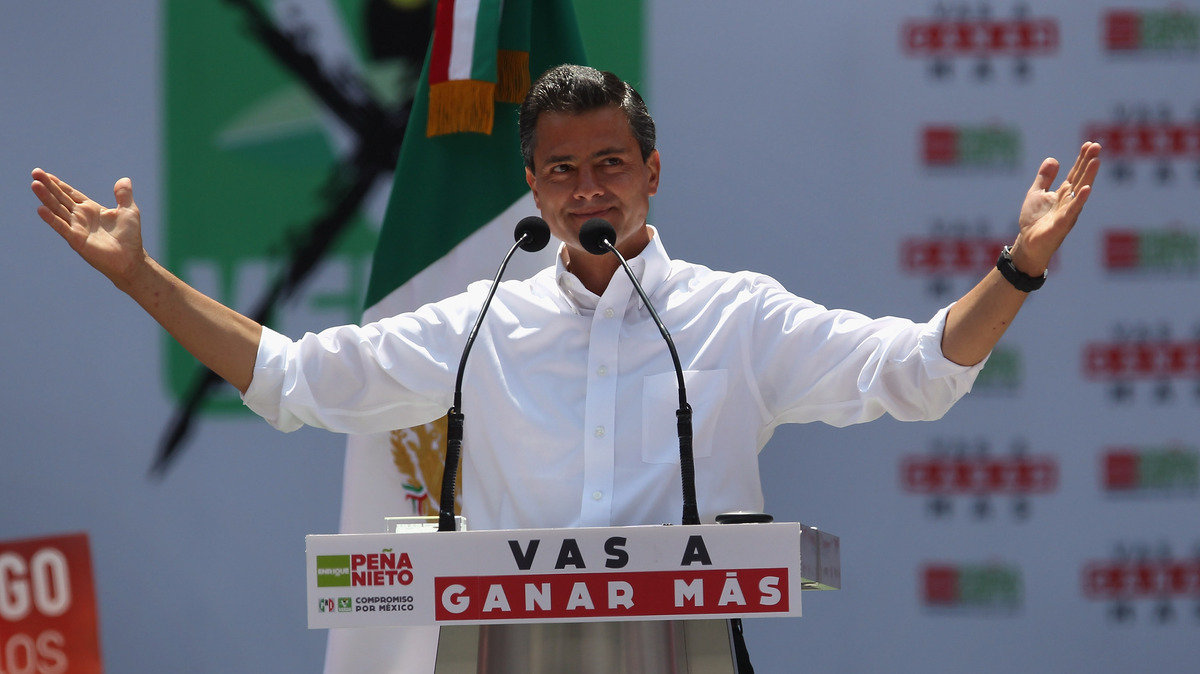 PRI candidate Enrique Pena Nieto campaigns in Mexico City. Pena Nieto is heavily favored in Mexico's presidential election on Sunday. He says his party, which has been out of power for 12 years after ruling for seven decades, has changed its ways.

The clear front-runner in Mexico's poll on Sunday is Enrique Pena Nieto, a member of the Institutional Revolutionary Party (PRI), which ran Mexico for 71 years until ousted from power in 2000.

I happen to think that our representative democracy is OK, so I can't see how even a formerly authoritarian party would perform in an authoritarian way.

Pena Nieto, 45, insists his party has changed its old authoritarian ways, and he's promised a new approach in the drug war, while saying he will take care of the country's failing education system and boost the salaries of hard-working Mexicans.

That's a much different tune than that of the old PRI, which had a reputation for widespread corruption, election rigging and colluding with drug traffickers.

This week nearly 100,000 party faithful packed the massive Aztec Stadium in Mexico City to see the candidate. Many traveled hours from nearby states on buses, filled with meals and snacks, paid for by the PRI.

Pena Nieto told the crowd that together they will leave the old political practices behind.

"We will be a modern government committed to democratic values of liberty, transparency and a full accounting of resources," he said.

Referring to the past 12 years under presidents from the National Action Party, or PAN, Pena Nieto said it was time to leave behind economic stagnation, social decline and violence. 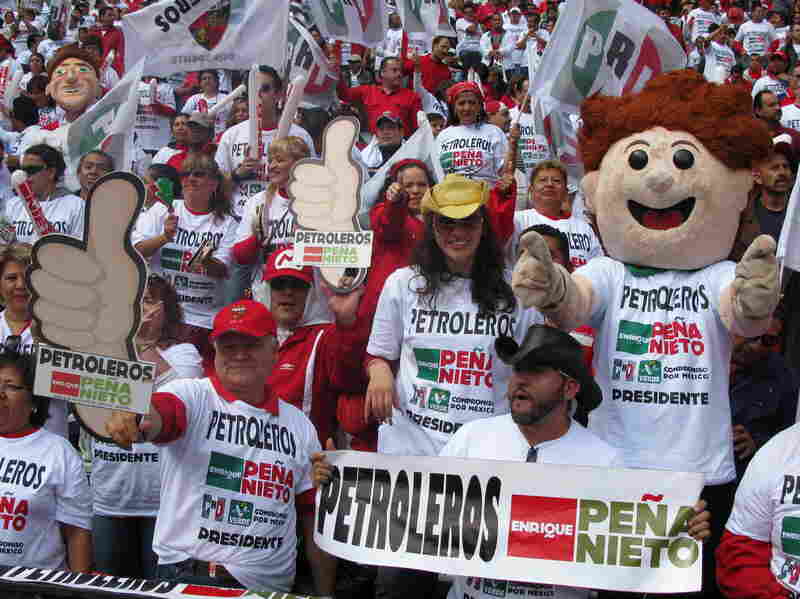 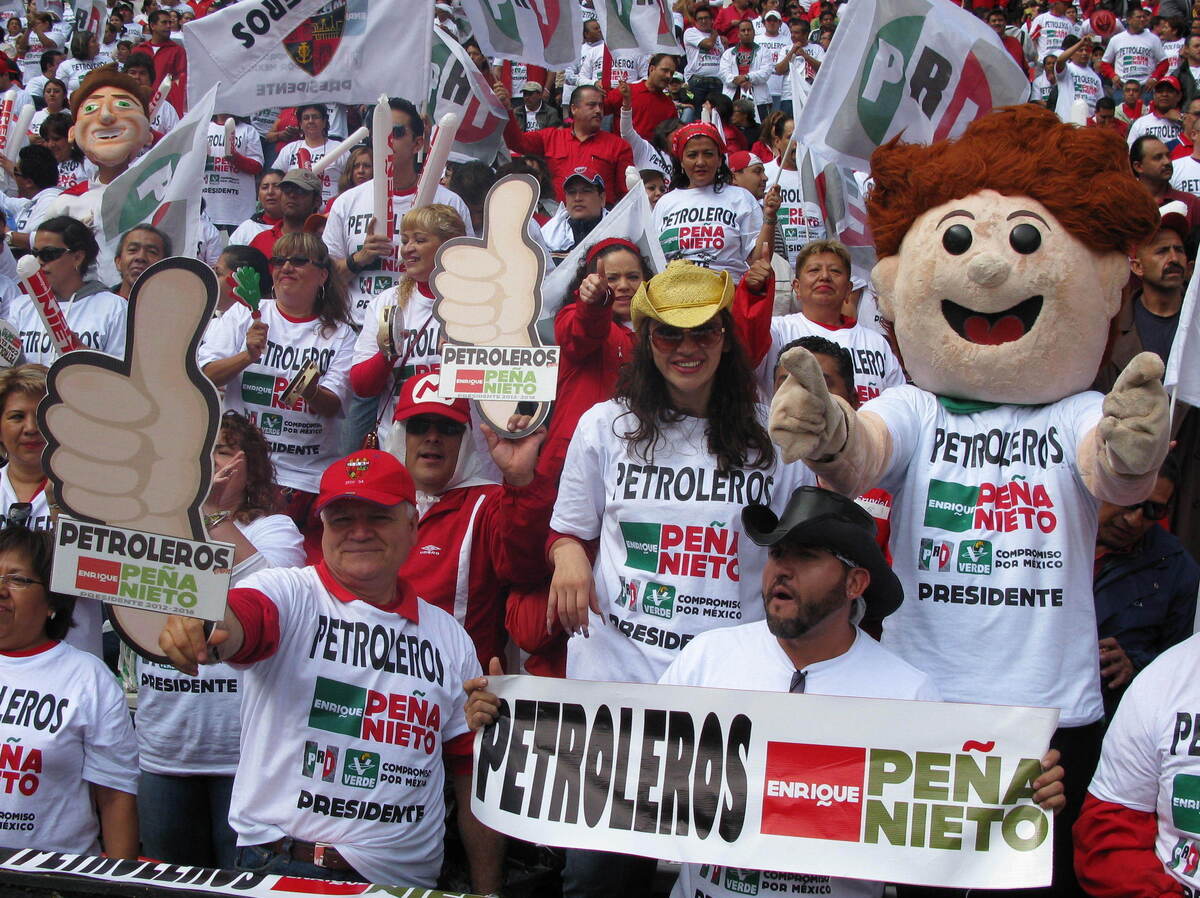 An estimated 100,000 people turned out for Pena Nieto's rally Sunday at Azteca Stadium in Mexico City.

Polls show that his message is resonating. In nearly all polls, he's had a solid double-digit lead for months.

Voter Romel Velez Gonzales, who came to the rally, said the current PAN administration hasn't made the country safer or more prosperous.

Velez, who runs a small business, says when it comes down to it he doesn't really believe the PRI has changed — but he's willing to give it the benefit of the doubt.

This is huge shift in popular opinion for the party that dominated Mexico for nearly all of the 20th century.

But many Mexicans feel the right-of-center party that's ruled since 2000, the PAN, hasn't fulfilled its promises of political and economic reform.

On top of that, current President Felipe Calderon's war on narcotrafficking has left more than 50,000 people dead and vast parts of northern Mexico are now ungovernable.

Out Of Power, Party Regroups

Political analyst Joy Langston Hawkes says the PRI masterfully regrouped and has come back roaring. The party now holds hundreds of mayor's posts, and more importantly, a majority of the governorships.

"Governors are very, very important in vote winning and vote mobilization," she says.

She says this time around the PRI picked — some say groomed — a very popular candidate in Pena Nieto.

Mexico's Once Dominant Party Poised For A Comeback

He was the governor of the state of Mexico, just outside the capital, and left with high approval ratings. He is young, handsome and is married to one of the country's most famous soap opera stars.

Pena Nieto has recently picked up influential endorsements. To the surprise of many, former President Vicente Fox — who is from the PAN — announced he's backing Pena Nieto.

Fox told NPR he's convinced that Pena Nieto is the only candidate capable of breaking through Mexico's political gridlock.

Fox's former foreign minister, Jorge Castaneda, a longtime critic of the PRI, says people shouldn't worry about what looks like an inevitable return of the PRI to power. Castaneda says Mexico is not the same country it was back in the 1990s. Its democratic institutions, while not fully matured, are strong.

"I happen to think that our representative democracy is OK, so I can't see how even a formerly authoritarian party would perform in an authoritarian way," he says.