Accessibility links
What Nora Ephron Taught Me About Love In The Movies Nora Ephron, who died Tuesday, wrote a trio of romantic comedies about love, inevitability, and truly great conversation. 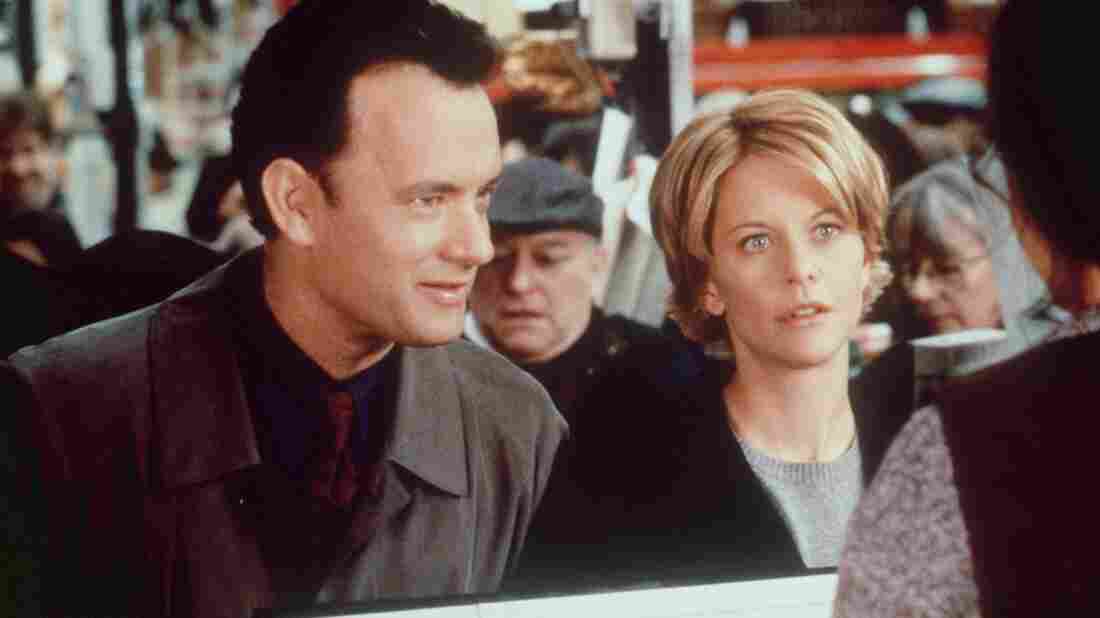 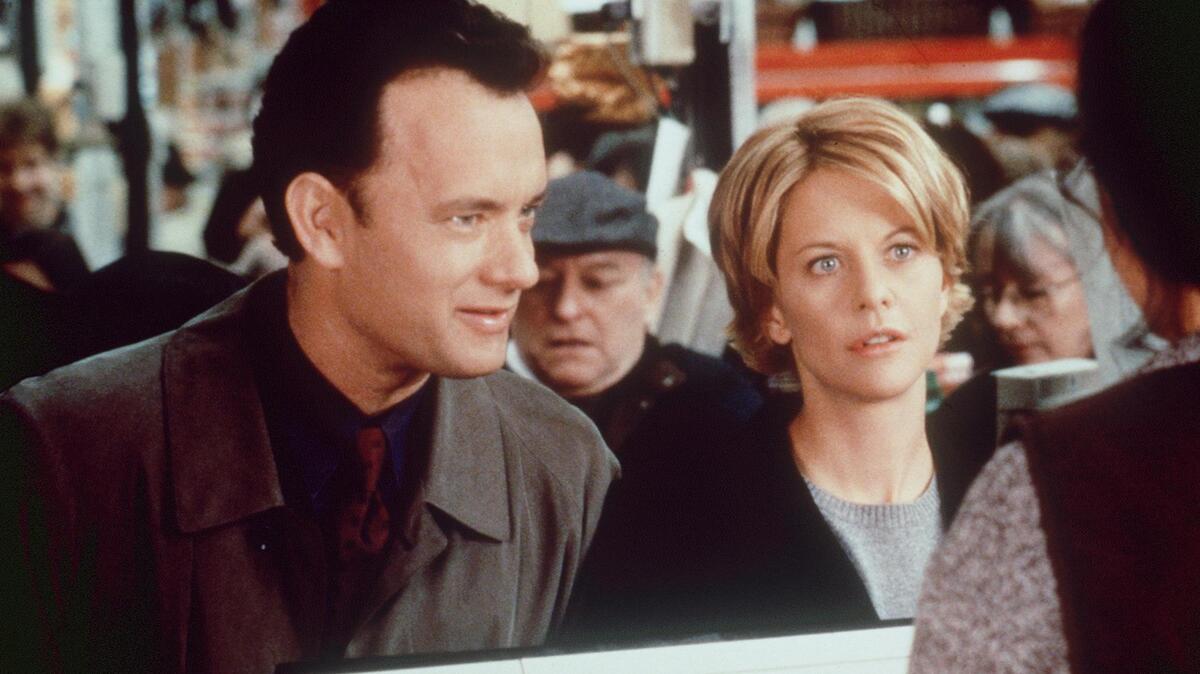 Tom Hanks and Meg Ryan in a scene from You've Got Mail.

To say I was the target audience for a particular segment of Nora Ephron's work is to understate the case.

In fact, if the famous trio of romantic comedies she wrote or co-wrote – When Harry Met Sally, Sleepless In Seattle, and You've Got Mail – had been a metal detector skimming a white sand beach, I would have been a long-buried doubloon. And if someone had followed with a strong enough magnet, I would have come up out of the sand and plastered myself to the bottom of it, and I would have rusted there.* I would be there still; I am there still, getting angry if anyone disturbs me.

When Harry Met Sally came out a few weeks after I graduated from high school, and somehow, I had not really connected my fiendish desire to chew on piles of words that felt good in my mouth to writing. But all that I loved was really just words I loved saying: Moonlighting and The Goodbye Girl and Singin' In The Rain and Tom Lehrer songs and Dave Barry books and Nikki Giovanni poems.

It gave me hope at 18, the way Harry tells Sally at the end, "I love that it takes you an hour and a half to order a sandwich." I've always thought love should be above all else generous and specific; what could be better? Despite being played by movie actors, they were just two giant goobers, really, talking and talking about days-of-the-week underpants and singing karaoke in The Sharper Image. It sounded human; my friends and I were all pretty much giant goobers, too. We still are, even though the particular friends are different. And we're definitely not as funny as Nora Ephron dialogue, which was so funny, even when there weren't jokes. (I still say "Why is this necessary in life?", just like Sally in the pith helmet.)

All three movies in this trio are variations on a dream of inevitability. If When Harry Met Sally is about the dream of inevitably getting better at relationships as you get older (it is not about whether men and women can be friends), Sleepless In Seattle is about the dream that inevitability itself – fate, signs, all that – can produce happiness.

This is a step into nonsense, and I mean that lovingly and etymologically. Sleepless is about love cut adrift from sense; it is about non-sense, and while wandering off with someone you've never met and know almost nothing about is in reality a great way to blow up your life, the desire to believe in this idea is a deeply human form of faith.

Sleepless isn't really about love in the movies, it's about loneliness, isn't it? It's about starting a halting conversation with Dr. Marcia the radio love guru because your house is so quiet. It's about agreeing that ten place settings is the right number but knowing that everything is wrong. And it's about leaning on your friends: Meg Ryan and Rosie O'Donnell have a quick phone call where, at the end of it, they say, "I love you," and "I love you, too." I was so struck by that, I remember – that in most movies, you're lucky if people say goodbye before they hang up, but this one knew that with your best friend, when it's important, you say, "I love you," and "I love you, too."

In grand, life-decision-making ways, it's ridiculous to meet on a roof and walk off together. But haven't you ever met someone you couldn't believe loved the same line from the same movie you did? Have you never said that something was a sign, even if you were officially kidding? Have you never said that "the rest was history," which implies that a moment happened, and then history just followed, like you were letting out the kite string but the wind was doing the work?

Ephron wrote fairy tales that spun things that really happen – reconciliation over time, mysterious chemistry, complex and loaded friendships, love after grief and loss – into things that don't happen, or don't happen very much. But I always recognized in those stories pieces of people I knew and conversations I had had; they were like choral compositions where everything else is just pretty sounds, but you can pick out the alto line because you sang it in choir fifteen years ago. You could never reproduce the entire thing without amplification and help, but that one part makes sense.

A lot of people will tell you that You've Got Mail is terrible, and I freely admit I haven't watched it nearly as often as the other ones. But I always liked the fact that it has the most fully developed sense of melancholy. It makes sense, since we were all of us getting older – you and me, and Meg Ryan, and Tom Hanks. The little bookstore is not saved; the crushing blows of changing shopping habits do not stop and spare this one place just because it happens to be in a movie. Girl's mother's spirit doesn't save it, and Boy doesn't secretly buy her building and grant her a perpetual lease for one penny a year and put her mother's picture back up. And yet, she has learned that he is a decent person and not a monster.

No matter how much Nora Ephron obviously sympathized with the tiny store over the big store, no matter how much she gave it every sentimental advantage and acknowledged that the big store would always lack its personal touch and curation, she suggested that this, like so many things, like the death that really forms the heart of Sleepless, is a sad thing that happens. It does not have to break you, and there does not have to be a bad guy to beat. This is inevitability for grownups. You will get your heart broken and you will feel lost – inevitably. But you will get up – inevitably.

When I heard that Nora Ephron had died, I felt a bit embarrassed that while I know she was an essayist of great wit, and while I've read some of her New Yorker pieces, and while I know she worked on more serious material like Heartburn and Silkwood and was one of a relatively few female directors who could get big projects made, my hand flew to my heart because of these pieces of pure popular film that I absolutely loved. Perhaps not as art, but as culture, if that's a distinction I can draw.

Nora Ephron would be part of any box of influences I might try to pull together that explained how I started writing, how I learned what kinds of jokes I like, and how I learned what kinds of love stories I respond to. I suspect I still accidentally try to talk like I'm in a Nora Ephron romantic comedy; I wouldn't know it, because I'd just think of it as trying to make great conversation.

I love that she wrote goofy stuff like spitting grape seeds into the window. I love that she used just the right amount of profanity. I love that I still like saying "Mr. Zero knew" and "Waiter, there is too much pepper on my paprikash," and that there is almost no occasion when I will not say "Baby Fishmouth."

I'm very grateful, really, for all of it.

*Please ignore everything I do not know about metals. It's figurative. She would forgive me.