Accessibility links
'Beasts' Finds Its Heart In A 6-Year-Old Heroine The film Beasts of the Southern Wild won top honors at Sundance and took a prize for best first film at Cannes. NPR's Melissa Block talks to director Benh Zeitlin about the isolated community he's imagined — and the extraordinary girl who narrates the picture. 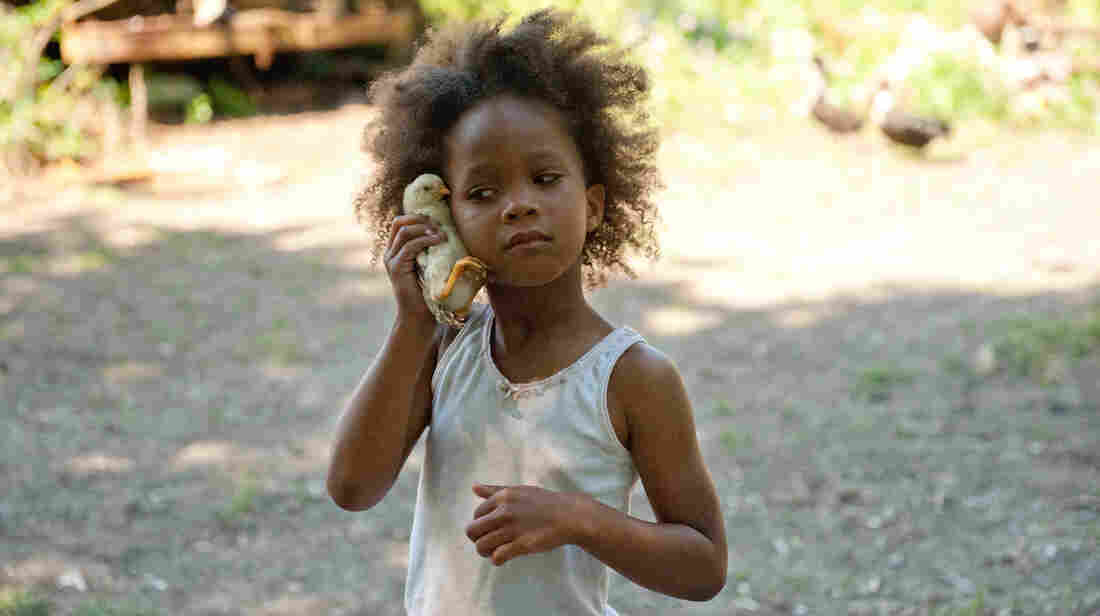 Hatching A Star: The tenacious Hushpuppy, of Benh Zeitlin's Beasts of the Southern Wild, is played by the equally fearless Quvenzhane Wallis, who was plucked for the role from a Louisiana elementary school. "It was an absolute miracle that we found her," Zeitlin says. Jess Pinkham/Fox Searchlight hide caption

The most captivating narrator in a movie right now has to be the fierce, brave 6-year-old girl at the center of director Benh Zeitlin's new film, Beasts of the Southern Wild.

Her name is Hushpuppy, and she lives with her father in the Bathtub, a ramshackle, isolated community that clings to the Louisiana coast — and is perched on the edge of extinction. The Bathtub is cut off by a levee built to protect the other side, but one day, Hushpuppy explains, a storm will blow in and breach that levee.

"The water's gonna rise up so high, ain't gonna be no Bathtub," she says, "just a whole buncha water."

The film is based on a play by Lucy Alibar, with whom Zeitlin also co-wrote the screenplay. It won top honors at the Sundance Film Festival and earned the best first film award at Cannes.

Zeitlin tells NPR's Melissa Block that despite being cut off from the world, Hushpuppy's home is an extremely vibrant place.

"They're pulling a feast out of the water every night and celebrating," he says. "It's this very joyful place that exists on ingenuity and fearlessness and tenaciousness. And it's a group of people that, under the most hostile conditions, are refusing to get pushed out of their homes and off their land."

"We actually originally wrote that character to be 11 years old, thinking that that was the youngest we could possibly find someone that could handle this role. But as we did casting — and we were casting as we were writing — we realized sort of to our horror that the mind we were trying to explore was actually a 6-year-old mind. And so that was sort of a disastrous moment where I told my producers this, and they were like, 'Oh, my God, this is impossible.' But we just searched and searched and searched. We looked at 4,000 kids over the course of about nine months, and, you know, sometimes the world guides you to your person. 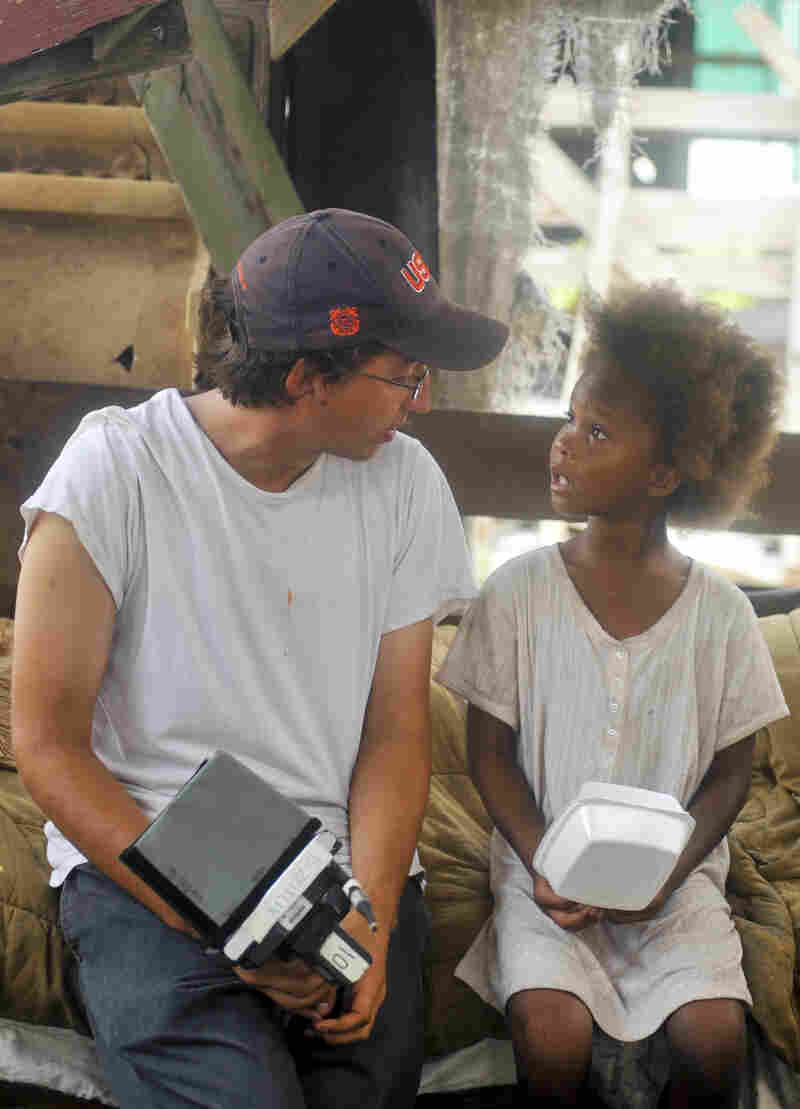 Director Benh Zeitlin says Beasts of the Southern Wild was a collaborative effort, with then-6-year-old actress Quvenzhane Wallis contributing lines like, "When you're small, you gotta fix what you can." Jess Pinkham/Fox Searchlight hide caption 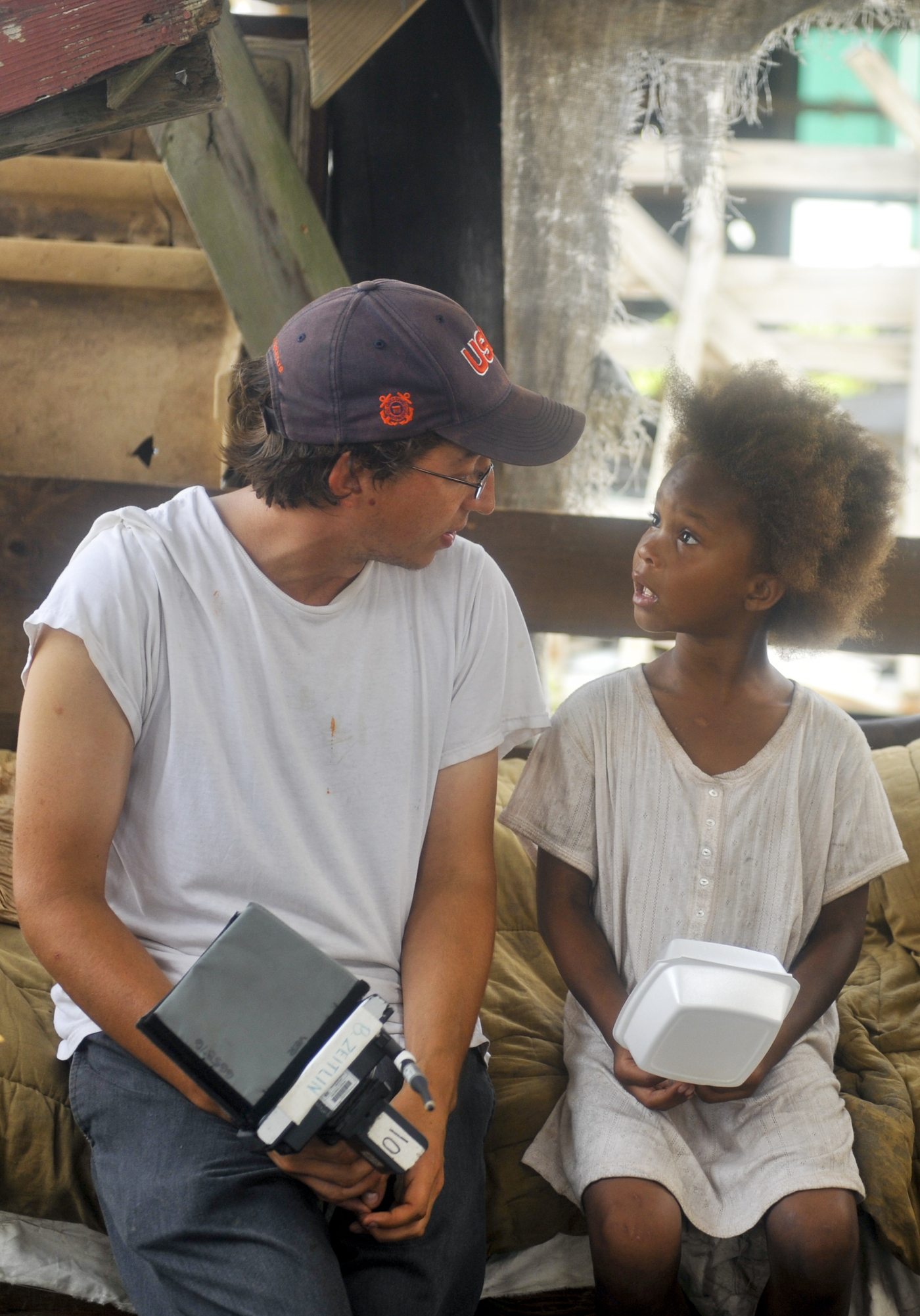 Director Benh Zeitlin says Beasts of the Southern Wild was a collaborative effort, with then-6-year-old actress Quvenzhane Wallis contributing lines like, "When you're small, you gotta fix what you can."

"The moment [Quvenzhane Wallis] walked in — I have it on tape. You just see this wisdom and focus and tenacity and fearlessness in her eyes that she didn't have to say anything. It was like you could put the camera on her face, and you just see this whole world that she has inside of her that's so beyond her years. And I think that was the thing that really took us the most — that she is such a little kid in so many ways, but then at the same time you can pull her aside and tell her where her motivation is and tell her where she needs to emotionally pivot in the scene, and she completely internalizes it, and is able to focus and project it. It was an absolute miracle that we found her."

On how Quvenzhane influenced the script

"We started off doing many, many interviews sort of before she ever looked at anything from the story of the script. I would say, 'Tell me about what happens at the end of the world,' and she would describe her vision of that, which was these crazy things with people's hands falling off and their clothes burning up and the light in the sky turning on and off really fast, like all these visions that she has. And I remember — this is just one example — but I remember asking her, 'If all these things were your fault, what would you do?' And she said, 'I would just try to fix it. I would do whatever I can to fix what I broke.' And then I said, 'What would you do to fix it?' And she said, 'Well, I would always brush my teeth. I would listen to my parents.'

"And it was something I never would have thought of. ... She knows she can't change the world, that she's too small to actually change anything big. But she can be good, and by being good somehow you can rectify what you've thrown off in the universe. And so that became a real principle of the character ... she fixes things by being sweet and kind and by trying to be this extremely defiant, fierce but good person. And that somehow you can restore order to the universe through your behavior. ...

"It's hard for me to remember what I wrote, what she wrote, what my co-writer, Lucy, wrote. It's very collaborative on every level, trying to let the characters breathe and let the voice[s] of these amazing people that play the parts in the film get on screen." 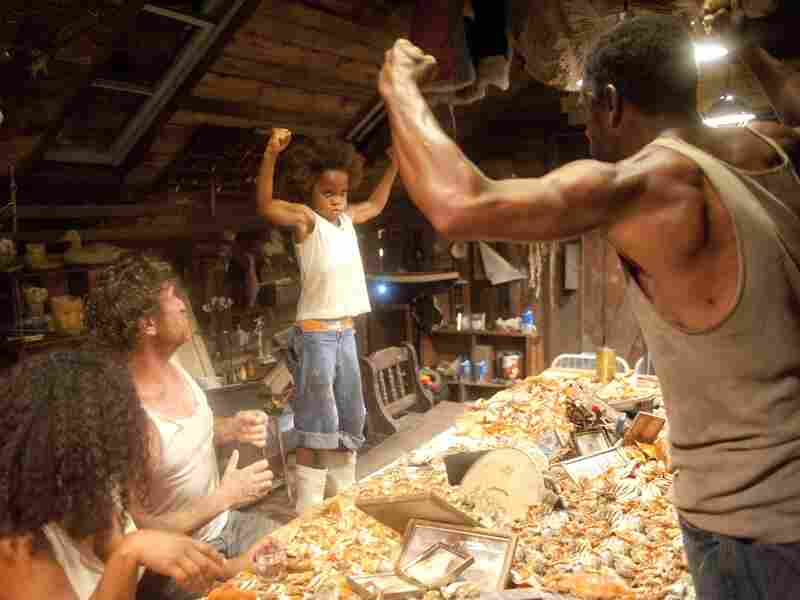 Much as playwright Lucy Alibar's father once did, Hushpuppy's father, played by Dwight Henry (right), encourages his daughter (Wallis) to be tough and strong by saying things like, "Show me your guns." Jess Pinkham/Fox Searchlight hide caption 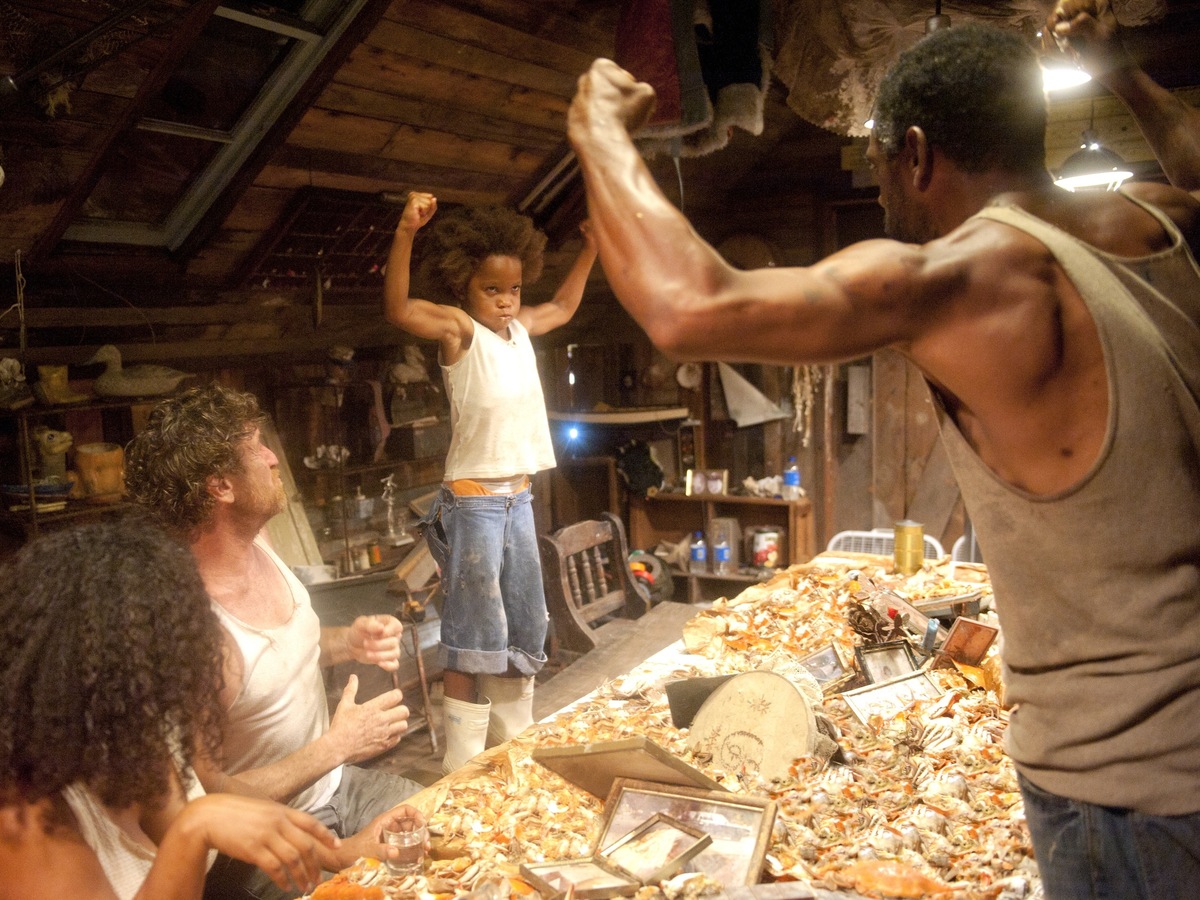 Much as playwright Lucy Alibar's father once did, Hushpuppy's father, played by Dwight Henry (right), encourages his daughter (Wallis) to be tough and strong by saying things like, "Show me your guns."

On Hushpuppy's relationship with her father, Wink

"The father-daughter relationship comes very much from [Lucy Alibar's] play Juicy and Delicious. That was one of the inspirations for the film. It's sort of a semi-autobiographical story about my co-writer, Lucy, and her father. We were sort of taking on this father-daughter relationship with this guy who, he doesn't really have a lot of tenderness. [Hushpuppy's father] expresses love through violence and through strength, and that's sort of how he's trying to raise his daughter. And so his concept of how she can survive is she needs to become a man. And not in a literal way — it's just sort of for him, that's what defines being strong and being brave. ...

"We were trying to create a sort of parenting that was about fearlessness. And I think a lot of the times, the way you're used to seeing parenting [is], 'You should be afraid of this,' 'Don't talk to this type of person,' 'Don't touch this,' 'Be careful' in all these ways. And Wink knows that's not the way that Hushpuppy can survive. And he needs to teach her to be not afraid, and be strong, and not be delicate and something that can be crushed by all these forces that are coming for them."

On how Quvenzhane is reacting to the film's success

"She's little. It's not like she was raised to be some star or something, or have a sense of what any of this is. We're always getting asked, 'What's next?' And she very coolly says, 'Fourth grade. Gotta stay on the honor roll.' ... All that said, she's a true-born superstar. She talks and people listen, and she smiles and people laugh, and she just has this ability to connect to anyone wherever we go that's amazing. So I think that she's both flourishing in the attention and doesn't see it as something that's that weird. It's just kind of part of her life."