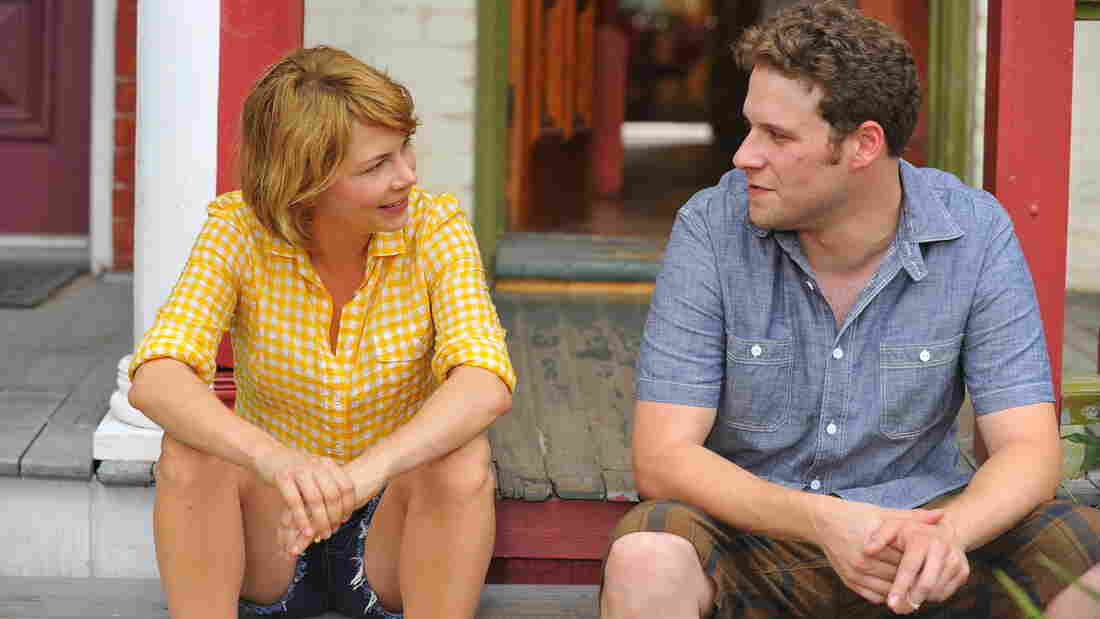 From 'Take This Waltz' - 'Rickshaw'

Actress Sarah Polley's 2006 directorial debut, Away From Her, was a bit of a shock: an unexpectedly tonic drift into adultery and Alzheimer's that somehow found a way to move us without resorting to the maudlin. What was exciting about that film was its voice — clear, confident and emotionally complex — and many wondered if it might be a fluke.

Now, with the release of Take This Waltz, we can see that it wasn't. Unabashedly devoted to its unmoored female heroine, Margot (Michelle Williams), a 28-year-old wife beginning to wish that she weren't, the film weaves a spell as inchoate as Margot's discontent.

A little flaky and a lot fearful, Margot has a dull pamphlet-writing job with Parks Canada (the film was shot in Toronto) and a husband, Lou (Seth Rogen), who's writing a cookbook about chicken. Together, the pair are cuddlesome and quirkily immature, cooing and joking in baby voices, in the comfy shorthand of the long-married.

But there's an edge to their coziness that surfaces now and then, a space in their clowning that you could drop a refrigerator into. At these moments, Margot looks lost, Lou looks confused, and the film holds its breath.

Take This Waltz is about these spaces — between people, between jobs, between states of being — that open up and, terrifyingly, demand action. Polley knows how to evoke the restlessness that precedes a major decision, and understands the way a seemingly happy, well-matched union can contain chasms of yearning.

"Life has gaps," says Margot's pragmatic sister-in-law (an excellent Sarah Silverman), a recovering alcoholic who knows what she's talking about. "You can't keep running around like an idiot trying to fill them."

But what if a filler is right in front of you? Like a cover of a romance novel come to life, here's Daniel (Luke Kirby), a new neighbor who drives a rickshaw and makes art in his spare time. Tall, dark, muscled and mysterious, Daniel seems almost too dreamily perfect, but that's precisely the point. He, and his unconventional life, are an everyday-housewife fantasy, as unreal and aspirational as Margot and Lou's faultlessly shabby-chic row house or the joyfully messy get-togethers with their families. And as Daniel and Margot move from skittish flirtation to the sexiest coffee-shop date ever, her looming choice — security or danger, comfort or excitement — could not possibly be a more cliched one. 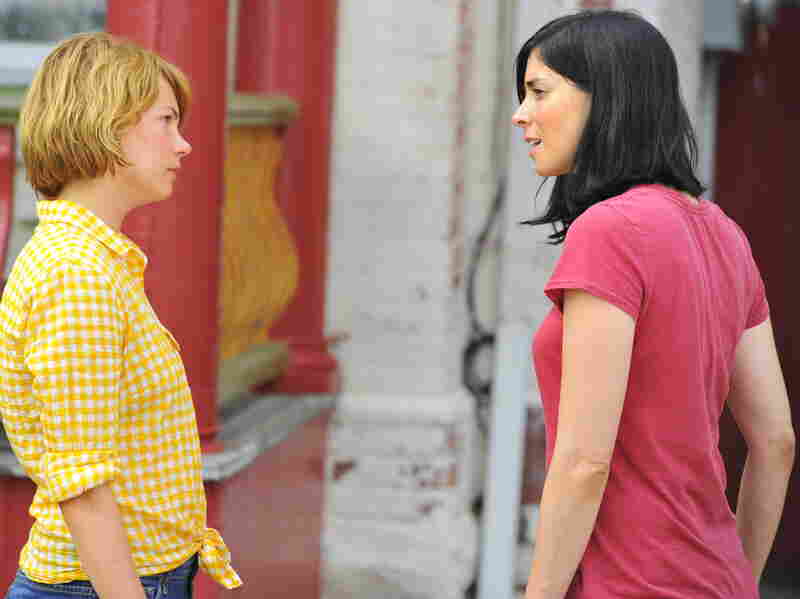 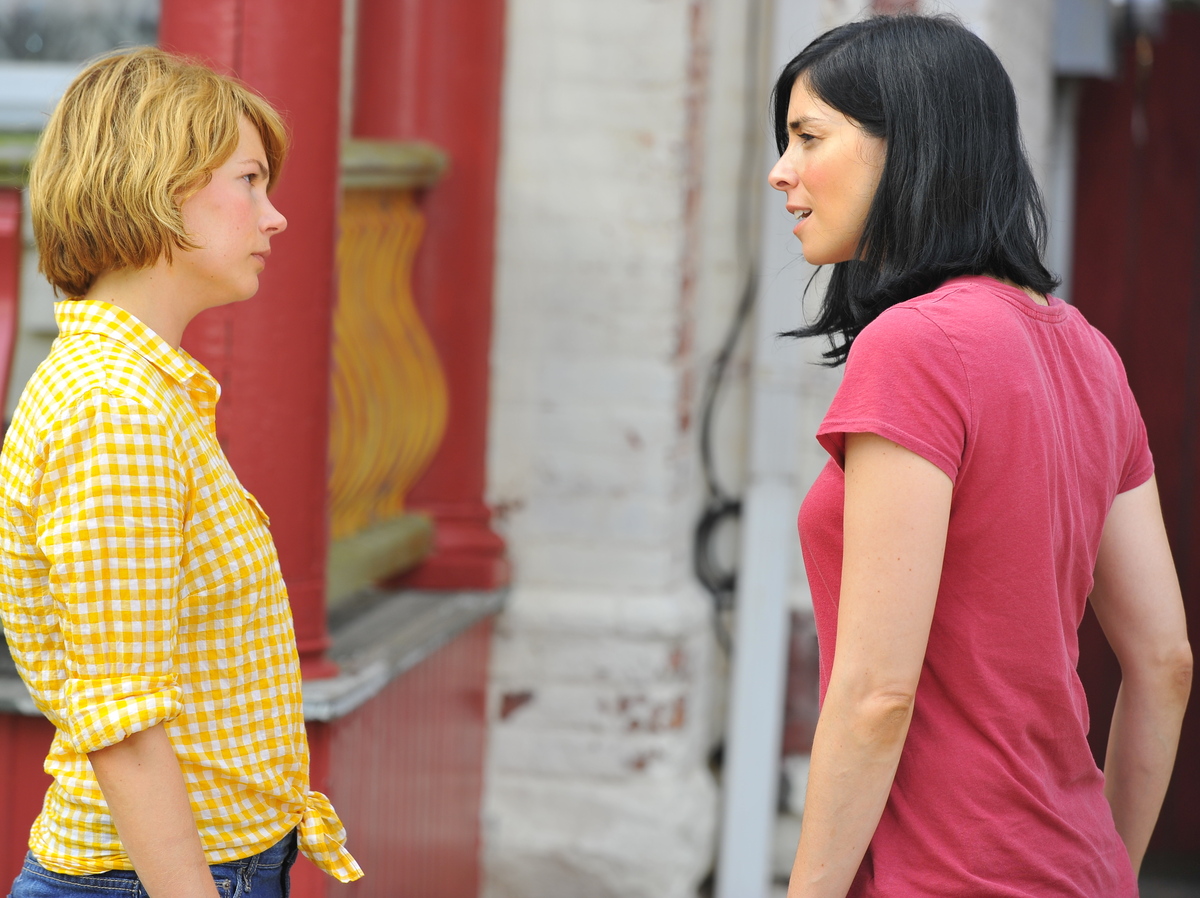 Sarah Silverman plays Lou's sister, a recovering alcoholic who is close with Margot and knows a bit about life's disappointments.

Somehow, though, Polley makes this very old trope feel fresh and challenging, nudging the film's emotional tone from whimsical to brutal, childish to adult, in ways that test her performers' mettle. And while Williams expresses the pitch-perfect vulnerability we've come to expect (and still barely looks older than she did on Dawson's Creek), it's Rogen who's the revelation. Who knew he could rise so far above the bromances and The Green Hornet?

Not everything here works, though, and some of Polley's stabs at metaphor and candid eroticism feel more than a little strained. Yet when everything comes together — as it does on an ecstatic carnival ride where Daniel and Margot wordlessly advance their attraction — we feel a sublime burst of understanding.

Scored to The Buggles' "Video Killed the Radio Star," a song about transitions and obsolescence, that carnival ride leaves a feeling of loss that echoes fitfully throughout the film. And like the death-haunted imagery of the Leonard Cohen song from which it takes its title, Take This Waltz understands that nothing remains new forever. (Recommended)